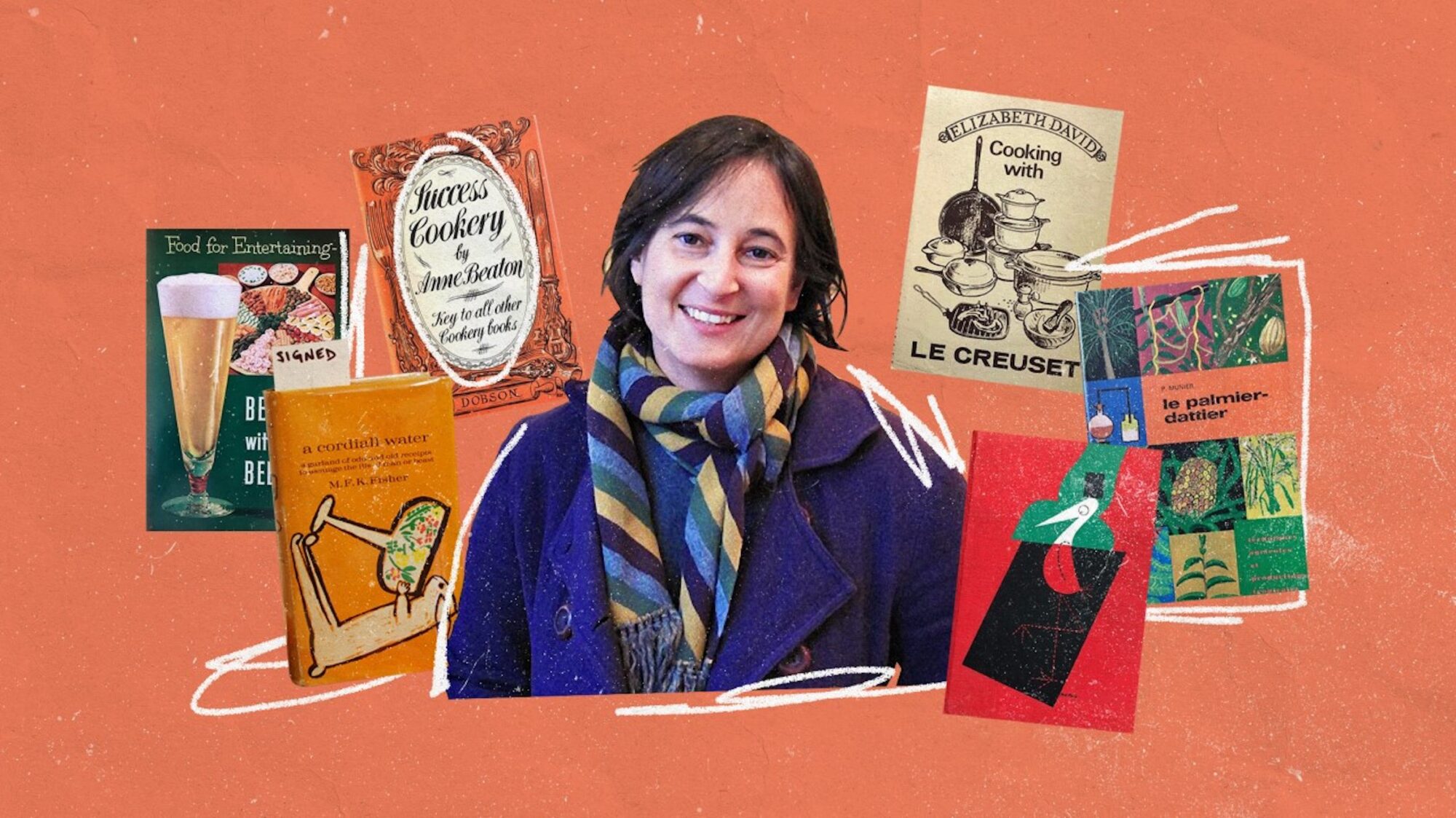 San Francisco shop owner Celia Sack on the old, new, and rare cookbooks she’s excited about this fall, from a Victorian-era ice cream edition to the foods of Macedonia.

“I’m not superstitious, but I won’t leave it unless it’s feet first,” says Celia Sack, who opened her highly curated and essential rare and new bookstore, San Francisco’s Omnivore Books on Food, in 2008 after years working in the antiquarian book world. Sack describes the Noe Valley store, housed in a former butcher shop from around 1900, “with the original scale and redwood-lined walk-in cooler,” as good luck. And for the past year-plus, while the world has endured a global pandemic and its various fallout, Sack has been feeling fortunate. Books sales boomed in 2020, and they continue to hold strong in 2021 as readers support local, independent booksellers to satisfy their appetite for cookbooks in all forms.

I recently got in touch with Sack, who I met while on a book tour with my friend and coauthor Deuki Hong and have known for years, to talk about her passion for rare cookbooks, as well as the newer titles set to hit the shelves during the busy fall season. I wanted to know about her cookbook grails and if the home cooks are still going cray for sourdough.

How has your store been doing in the past few months, and in general?
You know, it’s been doing pretty well. We actually did better in 2020 than most years, because so many people needed to cook—either to learn how to cook or to get new inspiration. And we started putting all of our books online. Before, we used to have just the antiquarian stuff and imports, things that you couldn’t get on Amazon—I always thought, if someone’s going to bother buying stuff online, they’ll just buy it the cheapest way possible, because they’re not getting any particular curation from me or anything. But I was totally wrong—people really, really supported us, which was wonderful, and I think that happened with a lot of bookshops around the country.

How about changes in buying behavior? I talked to Matt Sartwell at Kitchen Arts & Letters and Ken Concepcion and Michelle Mungcal at Now Serving, and they gave me some thoughts about the pandemic linking readers to cookbooks in a unique way. What are you seeing?
It’s funny; there were these really intense phases. When the pandemic first started, everyone was buying bread books like crazy, and all the publishers were running out of copies—a lot of these were sort of older titles. So the warehouses got wiped out, and then China wasn’t able to resupply them very quickly, so it was kind of crazy; you had all these back orders for bread baking books. And then, all of a sudden, it just died. You could feel, six weeks in, that people were like, “Fuck this. I’m not baking bread, this is ridiculous!” [Laughs.] So we had this huge back stock of bread books.

And then the same thing happened with George Floyd’s murder. That movement started, and everyone was buying books about African American cooking, and by African American authors, and that was really exciting, and I wish we could say that that trend has continued on, but it hasn’t. It died, too. Not that those books don’t sell, but they’re not selling ahead of everything else like they were, which was an exciting time. So now, people are buying a lot of books about comfort food; they really—I mean, I had this great mix of people who really, really wanted to learn how to cook, and then people who wanted to expand their repertoire.

What’s the book you recommend straightaway?
Well, there are two, actually. One is not that surprising; it’s Julia Turshen’s Small Victories. It’s just a fantastic book because all the titles of the recipes are very simple. They’re always two words, you know? Like “corn chowder” or “kimchi rice” or “patatas bravas.” So it’ll be very simple to approach, which I think is a big part of the thing, when people open something and are intimidated just by the title. And she has the simplest version of the recipe, and then she expands into variations on those. The other one is an older one, and it’s called Kitchen Simple by James Peterson. And it really is that. It’s like, how to make mashed potatoes. How to fry up a steak. How to boil water, basically, for pasta. [Laughs.] It’s the simplest stuff you can imagine, and there are surprisingly very few books like that out there. It’s amazing how many say “simple” or “quick” or “easy,” and you open it up, and the first recipe is something that no one who’s never cooked is going to make. Whereas this tells you how to make that Caesar salad dressing, how to dress it, or how to even make a vinaigrette and put it on a very simple salad.

I love it. This is so articulate about how books can actually unlock home cooking. It’s a huge challenge, obviously.
It is! Because cooking is one of those things that, the more work you put into it on the front end, the less you’re going to need to do as you improve in your cooking. I mean, I’m always saying, it’s much more important to memorize technique than it is to memorize recipes themselves. Once you know how to do a braise—it was such a revelation to me, when I was learning that the beginning of every braising recipe was the same. I was like, “Oh! So, basically, I just need a protein, some vegetable or fruit, and a liquid, and I can mix up whatever I want, as long as I follow those steps.” That helps you just make up stuff as you find it in the market. But it takes years to get to that point. It’s not true that cooking is really easy when you first start. You have to put in that work. But then it just gets easier and easier.

You sell antiquarian and rare food books. Is that a good business? And do you have a cookbook grail that you’ve always been searching for?
Good questions. Yes, it’s a great part of my business, and people always ask me if I cooked before this. No. I was a rare books specialist at an auction house, for many years. That was my background, and I always collected the books on food and really, really loved them, and I have managed to actually find most of the ones that I wanted. It’s interesting how your collecting habits change over the years, because a big part of my collection is Victorian pastry books, and I still really love those, but now I’m out of space. The big one that I recently gifted myself was—I hadn’t been actively looking for it, but I never thought one would come across my door—the Bartolomeo Scappi book from the 1500s. That’s got the very first illustration of a fork. It was the first illustrated cookbook ever.

Who buys rare cookbooks?
I have collectors who are just—there’s this man who I’ve become friends with over the years who’s probably got the best collection of M. F. K. Fisher books in the world. And I actually just bought a really great collection from a guy in Tucson named Dan Strehl who was a scholar of Mexican and Californian cookbooks, and he had some really interesting M. F. K. Fisher books, including one with a unique dust jacket on it, illustrated by another person that this guy collects, named Vance Gerry. So I was like, for him, this is a holy grail. But there are also lots of institutions—like the public library in LA just contacted me and said that I’ve got this collection that they’d be really interested in seeing. I sell a lot to Virginia Tech; they seem to collect a lot of older books on vegetarianism and health and World War I—I never know what they’re going to pick up, but they always want stuff.

I love that you sell on Instagram and Twitter.
Yeah, social media has been amazing. I sell so many books so quickly from putting stuff up there. And it’s so fun, you know? The other day, I was at this collection, and one of the books he had was a joke cover that MAD magazine did, and it looked like an old pulp novel, and they called it “Lady Chatterley’s Chopped Liver.” [Laughs.] And Nigella Lawson was DMing me, “Oh my God, I have to have this, please don’t say it’s sold.” It was not.

It’s mid-August, which means it’s fall cookbook preview time.  What are you excited about for this season?
Carla Lalli Music’s new book, That Sounds So Good. That one has gotten a lot of attention and a lot of preordered signed copies from us. She, of course, has a track record from her last book, Where Cooking Begins, and is a solid cookbook writer. It’s interesting to see where some of these folks who were at Bon Appétit are going now and whether their popularity is going to continue, and I would say it absolutely has continued. It’s really nice to see that she’s getting a lot of positive attention for it. Bryant Terry has this really interesting one coming out called Black Food. It’s contributions by all these different African American cookbook writers and chefs. I’m really looking forward to it.

There’s this really wonderful publisher called Interlink, that publishes books from places that are very unrepresented. They have a book coming out called Macedonia that’s all Macedonian cooking, and I don’t think there’s anything out there about that. They’ve also done books on Ethiopian cooking and Georgian cooking, and they have a new one called Sicilia that just came out this week, and it’s a really gorgeous book all about Sicilian cooking. I love giving them a shout-out, because mainstream publishers talk a good game, but they oftentimes don’t publish books by places that are not as well-known. It’s just kind of a risk. But these guys, they really put their money where their mouth is.

We recently caught up with Adeena Sussman, whose writing about gazoz is a fizzy, refreshing jumping-off point to tell the story of the modern Israeli kitchen.

The Weekday Vegetarians is Jenny Rosenstrach’s follow-up to Dinner: A Love Story, and it details the next chapter—one with much less meat involved.

In Made From Scratch, the late business maverick Kent Taylor tells the legendary story of Texas Roadhouse and, in the process, reveals its recipe for success: embracing unorthodox business practices.

The Joy of Pizza: Everything You Need to Know sort of says it all. We’re really excited about this one.

From the New York Times best-selling author and his superteam of chefs, Ottolenghi Test Kitchen includes 85 recipes for relaxed, flexible home cooking that will bring the love to every shelf in your pantry, fridge, and freezer.