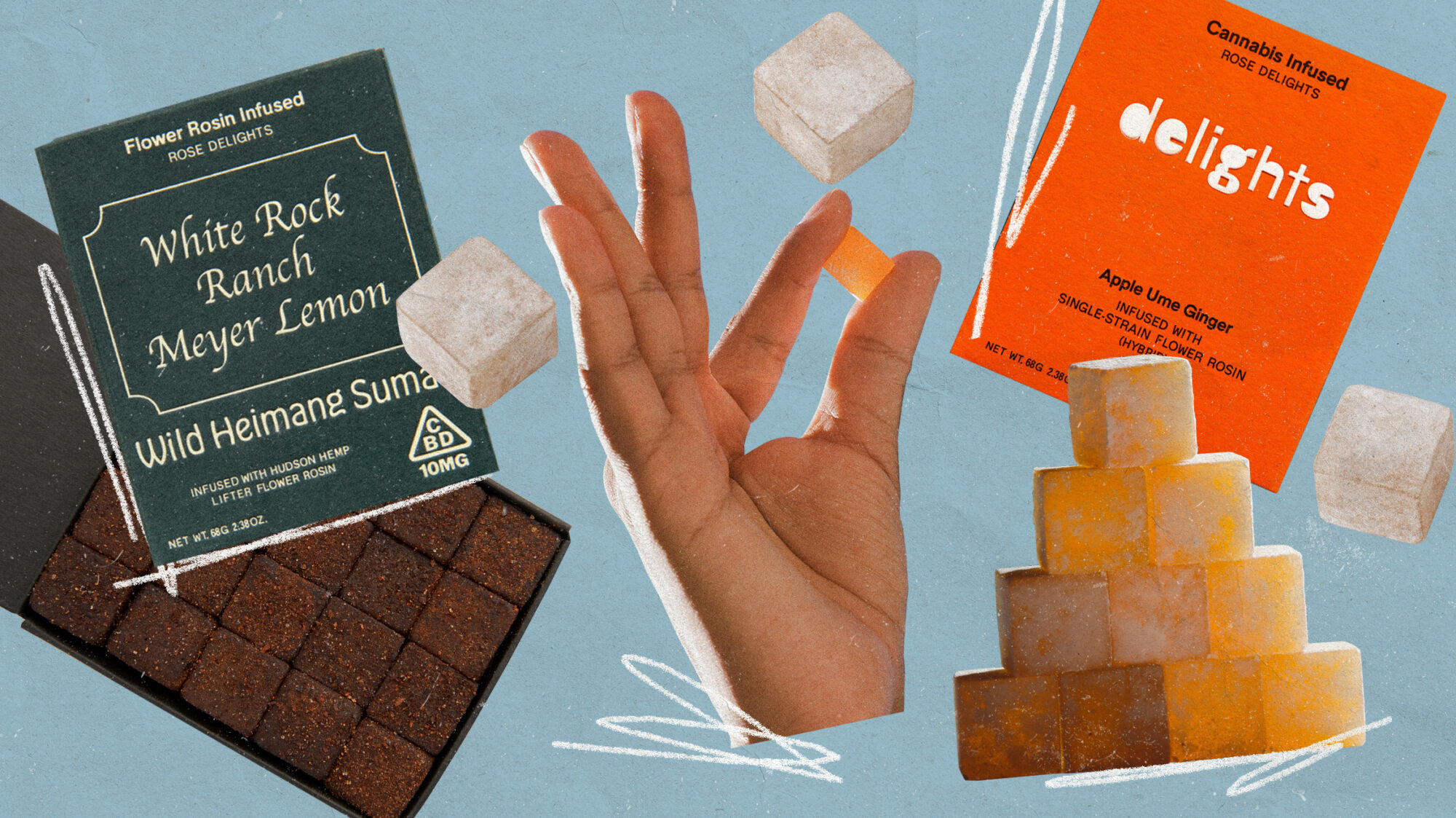 Remember when the word “edibles” brough to mind musty gummies, neon lollipops, and, as a result, having a truly interstellar interaction with a box of Cosmic Brownies? In the early days of cannabis legalization, some burgeoning brands viewed potency as the prize and flavor as an afterthought—cribbing flavors like sour cherry and blue raspberry from the highly processed candy aisle. Today, strolling through a dispensary in one of the 31 states where cannabis is currently legal for recreational or medicinal use (or scrolling through Instagram) reveals a wave of smartly sourced, aesthetically minded brands. But even in this glossy, oversaturated landscape, Rose stands apart.

The Los Angeles–based cannabis brand launched with their farm-grown flower (that’s the smokable stuff) in 2017, but things really took off with the launch of their Turkish delight–inspired edibles in 2018. Inspired by confections from Miette Patisserie & Confiserie in San Francisco—but also The Lion, the Witch and the Wardrobe—the so-called Delights (available in CBD and THC variations) spotlight unconventional flavors led by partnerships with top chefs and farmers.

“There are tons of incentives for people making edibles to decide it’s not worth the risk to work with real food and real cooking processes,” says Rose co-owner Nathan Cozzolino. “We have no interest in working with anything other than produce produced at farms that inspire us, using similar methods to how people cook.” I called up Cozzolino to talk about the challenges of working with real food in the cannabis space, the flavors that pair best with pot, and more.

Are there any flavors that pair especially well—or poorly—with cannabis?
Sometimes softer tropical fruits drown out and lose structure when you cook them. We did a cherimoya flavor with lime and Sannam chile sourced from Diaspora Co. People loved it because the cannabis in it was pretty unique, but the recipe wasn’t one we’d remake. Cherimoya is just too delicate of a flavor and a fruit—it bruises really easily, and the color doesn’t hold when you heat it.

Something with more acid and structure to begin with is a bit more flexible. Also things that are really chewy and juicy, like the Shinano Smile grape flavor, will always taste amazing. It was like the best fruit gummy snack I’ve tried. Right now, we’re working on a recipe with David Zilber. The initial idea was a pretty acidic citrus mixed with kimchi juice and a Korean chile coating—that’s a perfect example of one where we don’t know how it will come out but we’ll test it.

What are some of the challenges of making edibles with actual food in them?
A lot of people are encouraged to steer away from working with real food in the cannabis space because it’s too much of a regulatory and compliance risk liability. We made a recipe with Enrique Olvera where we fire-roasted three different types of tomatoes for essentially a michelada recipe with fermented chiles called ojo rojo, or red eye.

The ash from the wood fire tested for lead, so we had to throw away 1,300 units in boxes to satisfy the California Department of Cannabis Control. We traced back the so-called contaminate—as contaminated as any wood-fired pizza is—and showed that it was wood ash. The amount of lead it tested as having was actually safe according to the US Food and Drug Administration, but the Department of Cannabis Control was applying blanket regulation to smokable cannabis instead of edibles. That’s an example where six months of work with one of, in our opinions, the most interesting chefs in the world went directly into a trash can because we opted to use real food and real cooking practices.

When you’re ordering tart cherry juice in a plastic bottle off Amazon and mixing it with vanilla bean paste, it’s slightly “safer.” When you’re putting together a network of farms with different organic farming practices in different regions, each one poses a new risk or threat to whether or not the product will be able to test clean according to Department of Cannabis Control standards.

The edibles market has transformed so much in recent years. What trends or changes do you want to see in 2023?
When there was an influx of capital, it encouraged the rapid industrialization of cannabis. What I’m hoping will be the trend is people observing and coming to understand that that’s not the most interesting direction we can go in. We’ve learned from other industries that the industrialization of agricultural products doesn’t always provide the best outcome or the most interesting products for human consumption.

People often engineer products around interesting margins and viability to scale. I think Rose engineers products backward—we start with something we’d want to find as consumers in a retail store, then figure out how to make it work from a business perspective. When the first objective is margins and scalability, that doesn’t always result in the most interesting products to purchase and consume.

I hope there’s a universal return to nature, where people regard nature with more respect as it relates to the production and scaling of cannabis products. I hope to see people take their foot off the gas of industrializing cannabis and find more sustainable ways to use the plant and use it to make products.