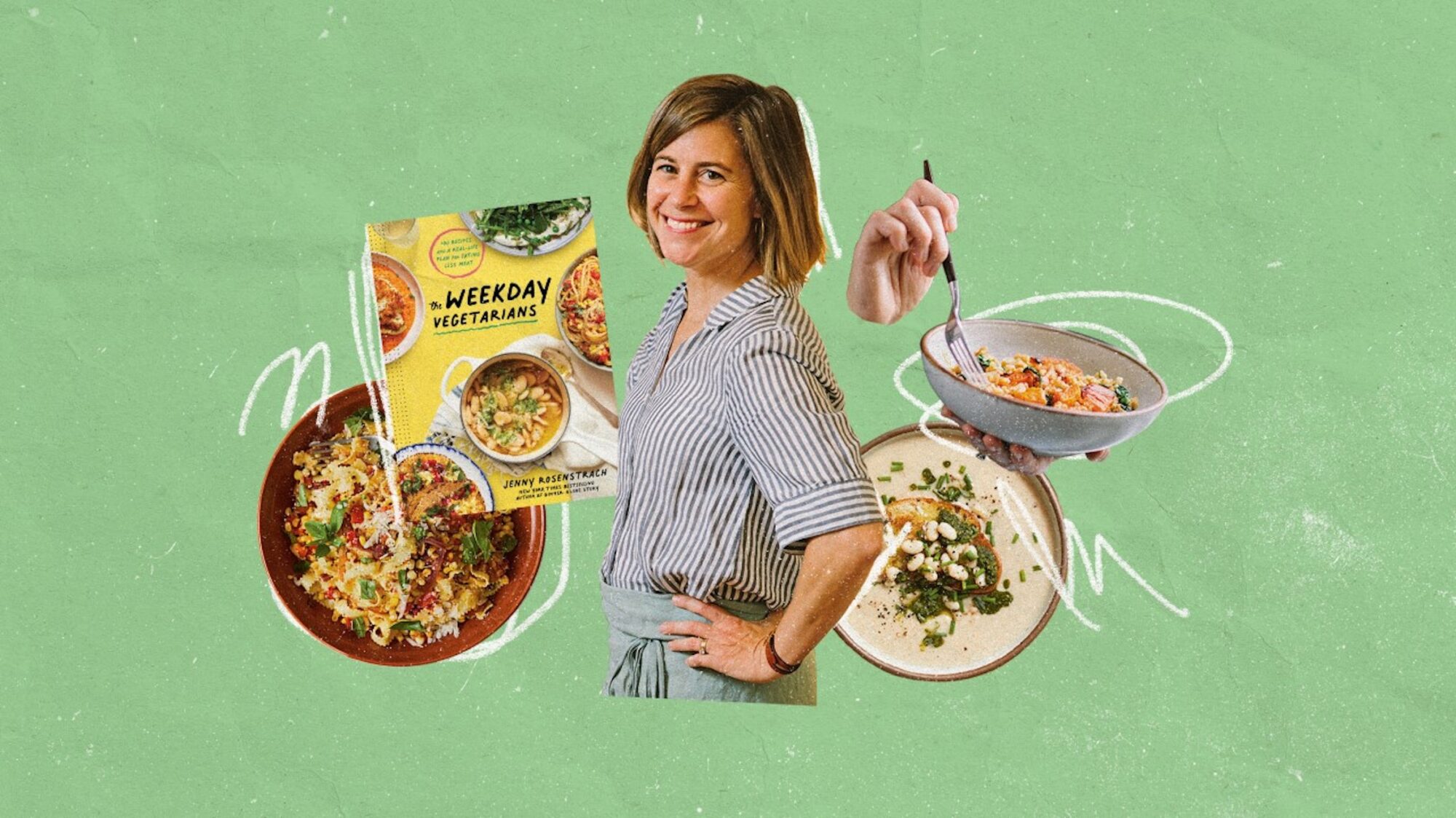 Jenny Rosenstrach’s new book, The Weekday Vegetarians, is big on practicality, fun, and getting creative with cabbage.

For many followers of the home cooking internet, Jenny Rosenstrach’s Dinner: A Love Story has been a steady hand holding the whisk for the past decade. Originally a blog and books series, now also a newsletter and podcast, Rosenstrach has shown a knack for creative and current recipe development with style and a strong voice that presents culinary ideas big and small. Reading through the author’s empathetic Project, Pantry, Purpose series, written mostly over the past 18 months, it proves to be a valuable cooking resource, but also a gutsy journal of the post–Before Times. Her late-March 2020 banana bread isolation journal reminds me of so many gray days from that time.

But we were on Zoom in late October talking about relatively sunnier days, and the author’s recently released New York Times best seller, The Weekday Vegetarians. As the name suggests, Rosenstrach’s vision is of a world where plant-based eating becomes more of a Monday-through-Friday habit than a life-altering stricture, following in the footsteps of Mark Bittman’s popular VB6. There’s plenty of inventive cooking here, including fresh takes on veggie burgers and cabbage cookery, as we discuss.

Let’s get into The Weekday Vegetarians, because I want to talk about some specific recipes, but I also just want to zoom out and actually talk about writing about the vegetarian point of view. Have you found that that style of cooking has been difficult to sell to certain folks? This could be your children, it could be the readers of Dinner: A Love Story.
I mean, I’ll start with my children. Ten years ago, I probably would never have been able to do this. I don’t think they were really in the right place for it. But now, they’re teenagers, and they’re learning about climate change and the environment, just like all of us, and the conversations at the table just got so loud, and they were motivating and motivated to do this. So it helped me, and it was an easier sell for them.

As far as readers go, it does feel like everyone is sort of having this conversation about wanting to dial back on meat. I felt like a lot of people were ready for it; they just didn’t know how to do it. And I feel like there’s been a push toward loving vegetables for the last ten years with cookbooks. Beginning with Yotam Ottolenghi putting eggplant on the cover [of Plenty] and making a real appeal to people about how good vegetables can be. Then the all-day café thing happened, and there were avocados for lunch instead of turkey burgers, and it just felt like this gradual shift. It felt to me like a very natural next step. I could never say I’m not eating meat ever again. But I felt like the reason I could do it was, I just said, “Okay, I’m going to try to take us one notch up from Meatless Monday, and let’s see if we can do this for five days,” you know?

I like that.
I think that has been part of the success of the book, because it’s hard to just tell people, “Don’t do this anymore,” after they’ve been doing it for so long. “Don’t ever eat your grandmother’s meatballs again, even though you grew up on them.” I wish we could all be better humans that way, but the reality is, we’re not. Someone commented this on one of my posts, and I thought it was such a nice way to say it — someone said, “We need more people eating less meat, rather than a few people eating no meat.” And I thought that was exactly right. That’s the whole idea of this book.

I feel like you’re really hammering home through your recipes that cabbage is underrated. Hard agree.
I love that you picked up that through thread! I think it’s true, but I never actually thought about it that way. I love cabbage. I write a column for A Cup of Jo, and last year I wrote a story about cabbage in the middle of quarantine, and it was crazy how people responded to it. People loved cabbage because it’s cheap and it’s versatile and it’s so healthy, and I had only really loved it for slaw for so long. I know it sounds crazy, but I really am very new to roasting it and cooking with it, and I don’t know why it took me so long.

Roasting cabbage is kind of underrated. For both napa and other varieties, it’s so underrated.
Oh my God, it just gets so caramelly, and the texture is so good, because it’s tender but also roasted and crunchy, and it’s so cheap, and it lasts forever.

How did you crack the veggie burger code? Because we’ve written about veggie burgers in the past, and veggie burgers are complicated—they can be very bad.
Yeah—I mean, I don’t know if I’ve cracked it, necessarily. But as far as veggie burgers go, it’s the best one that I’ve had.

It was a lot of trial and error. My problem was that I was putting so much emphasis on the beans, and so they all tasted like bean burgers. I finally just cut back on the beans—and I didn’t make them black beans, because I feel like black beans are so flavorful, and a lot of the burger recipes out there are based on black beans, I thought.

What’s the key?
Mushrooms. I tried a combination of mushrooms with pinto beans, because I also like the color of pinto beans; they look like burgers, you know? The trick is to make them really flat and get the edges craggy, so you’re not biting into a big patty of mush.

Like a smashburger.
Yeah. You need piles of toppings, too, so there’s avocado and spicy mayo and lettuce. You can’t just have a burger with ketchup—it’s just not trying to be a burger. Which is why I think it works for me, at least. My kids love ’em, too, so I’m delighted about that.

You cite a lot of sources in your book, and it’s clear you’re a reader when you’re talking to people and your readers. Where do you find inspiration when you’re looking at a blank wall for your books or your columns? How do you get inspired? I know this may seem like a corny question, but I feel like you’ll give me a great answer.
That’s nice! I don’t know if I can deliver on that, but I love reading about food. I get every cookbook in the world sent to me, because I review cookbooks a lot on the blog, and I do like a New York Times cookbook roundup. I’ve done that many, many times—and you should see how many books get sent to me; I’m sure you’re the same way. It’s wonderful, but it’s overwhelming. But I do pretty much get to all of them, and I always find something interesting. Instagram, too—I also get stuff from TikTok. Things just kind of lodge in my head. When I go out to dinner, restaurants are a huge inspiration for me. Especially when the kids were young—I would watch what they would eat, because it would help me figure out how to get them excited for something. If I could translate a restaurant meal at home, I was always a little bit ahead of the game.

That’s the love affair you write about, in some ways, in my mind. When I see Love Story, it’s like, you have a love of restaurants, and you have a love of food culture—that’s the way I read the title.
I like the title because it can be read in many different ways. My first book was like, “Oh, it’s obviously a love story about your husband.” And I was like, “It is? I didn’t mean for it to be that way.” Because I read it like a love story about the ritual and my kids. 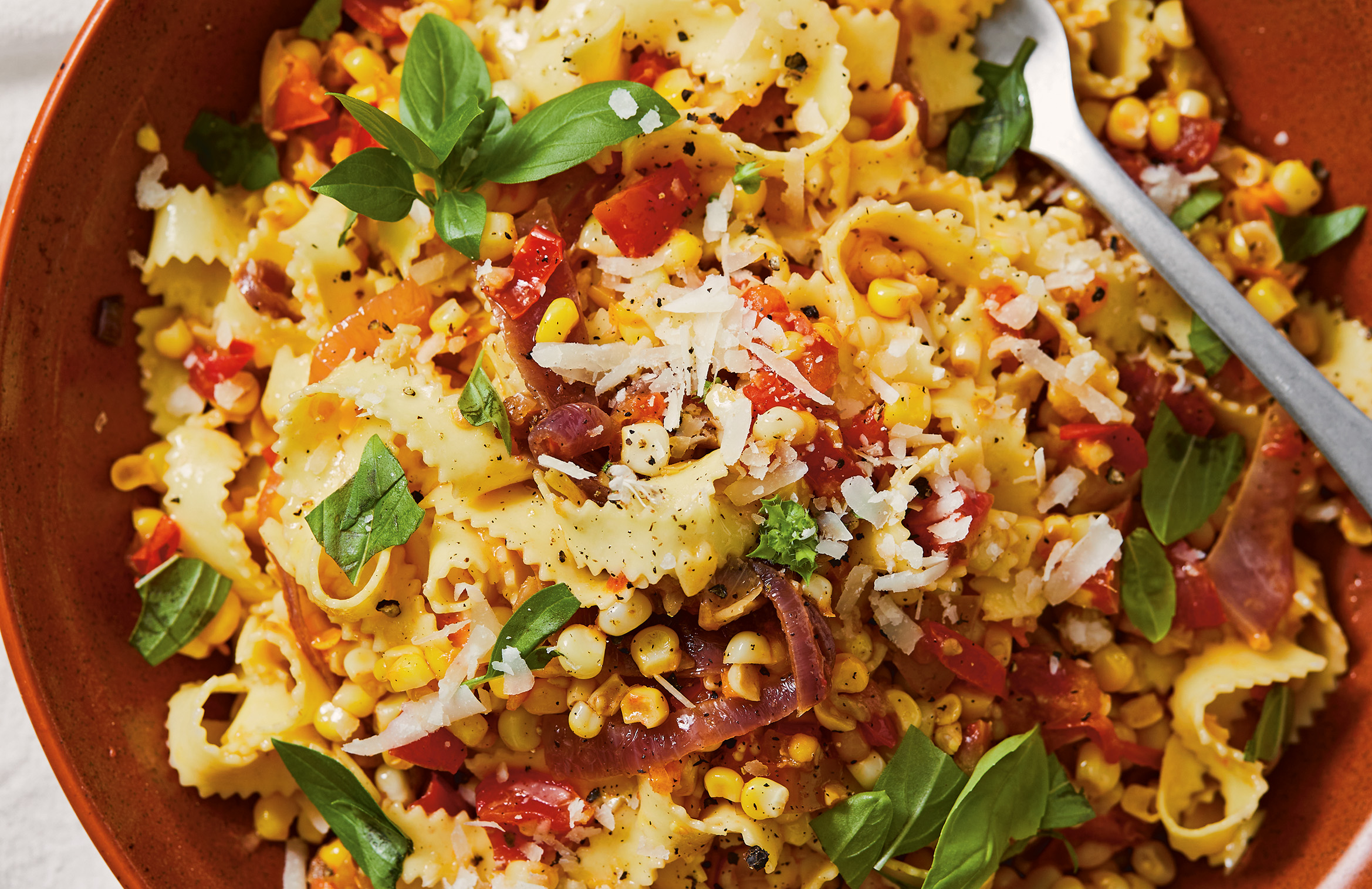 TWO REALLY GREAT RECIPES TO COOK FROM THE WEEKDAY VEGETARIANS:

The Easiest White Bean Soup
“As with many soups, this one is about the add-ons. Serving it with the three suggested toppings (croutons, pesto, and scallions) will take this to the next level, but you’re still okay if you only have the time or sanity for the first two. Tip for parents serving soup skeptics: The kids might think of the soup as more of a “dip” if you serve it in a small bowl and the crouton like a piece of toast on the side.”

Tagliatelle with Corn, Tomatoes, and “Onion-Bacon”
“Over the years, we’ve made this pasta with shrimp, with bacon, and with both shrimp and bacon, and when the tomatoes and corn are at peak sweetness, it practically shouts summer. Which is to say, it’s easy, fresh, and hits notes that you can get only a few weeks a year. I worried about making an entirely plant-based version of it, but then I learned a trick from Bon Appétit’s Chris Morocco: If you caramelize red onions at a low heat (for about as long as it takes to boil water and then cook the pasta), they take on a richness that rivals bacon.”