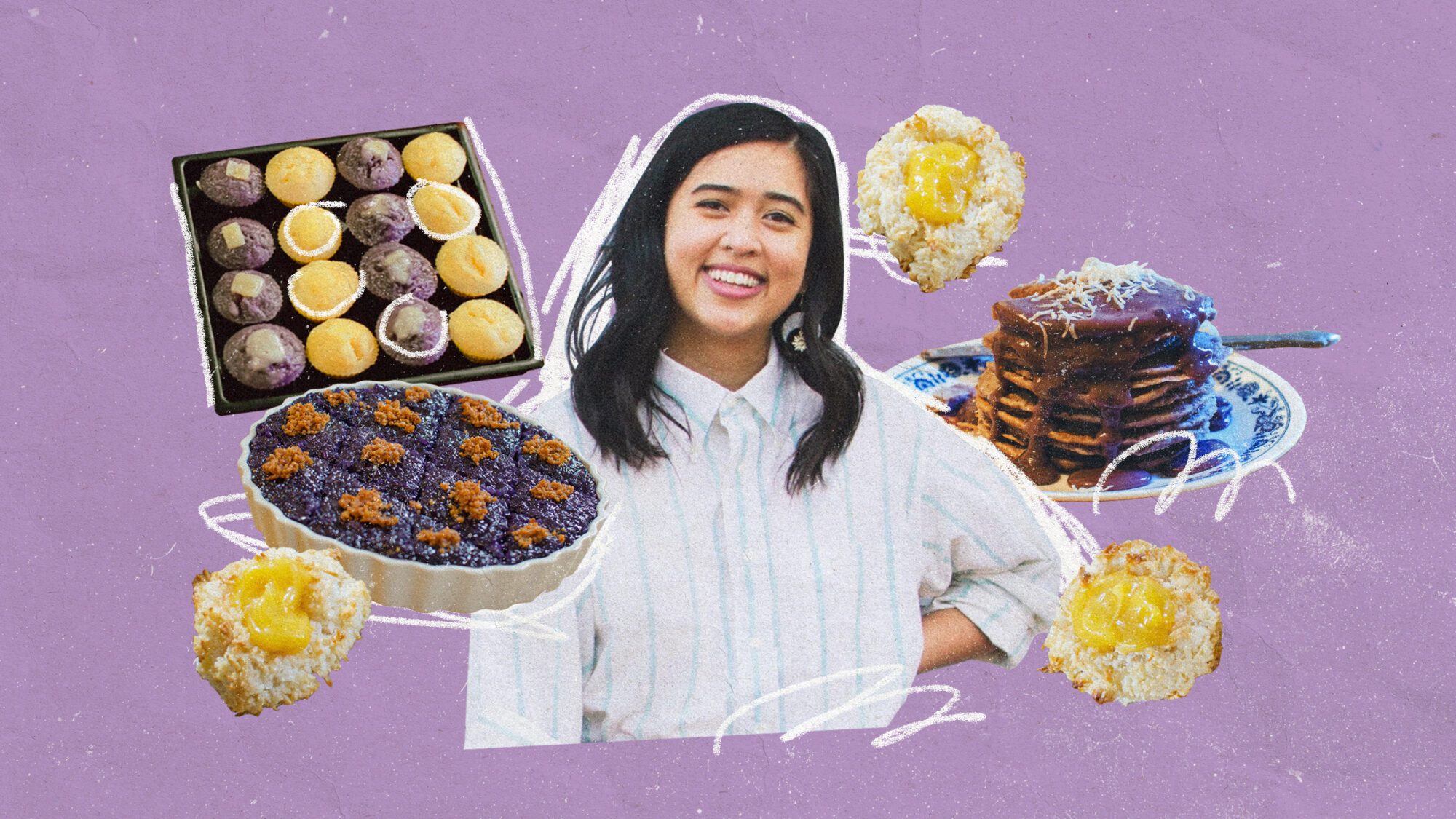 At the end of 2019, Rachel Lucero made it her New Year’s resolution to tackle a different Filipino recipe each month to improve her understanding of the cuisine she grew up with. But what started as a personal project to simply master 12 recipes has instead evolved into three seasons of the Sago Show, a series of snack-size videos that celebrate classic Filipino recipes with narration by Lucero—where she discusses the relevance of colonization, imperialism, and climate change interwoven into each food history.

In not only growing more comfortable with cooking a roster of dishes like arroz caldo and pork sisig, each season acts as a “syllabus” of crucial pillars to both Filipino cuisine and a deeper understanding of identity within the diaspora. One season explores the impact of imperialism on Filipino cuisine, as evidenced by the now-iconic bottles of banana ketchup invented during a World War II tomato shortage, while another zooms in on the global complexities of palm oil and high consumer demand within the coconut farming industry. It’s as if each video serves as an extended recipe description—unbound by concise word counts, and with links for further reading and discussion in the comments section.

We recently caught up on Zoom to discuss the show’s evolution, how that changed Lucero’s own perception of identity, and finally seeing respect for halo-halo in food media.

What inspired the launch of the Sago Show?
It was really late 2019, and I was thinking about what I wanted my New Year’s resolution to be. Instead of a resolution, I decided to do a project that would help me develop more of an understanding of my Filipino identity. I knew from some conferences and workshops I had gone to around Asian-American identity that, in order for me to do this development, it had to be an intention I set for myself. I really needed to push myself to learn more about our history and do more reflecting. And so I thought, “Okay, I like to cook, but I don’t know a lot about Filipino dishes.” So I decided that, for my project, I was going to cook a different Filipino dish each month and learn about its history.

Growing up, I always wanted to have my own cooking show. It’s really funny. When I was in first grade, we had this assignment to shoot a video of ourselves cooking anything—which is kind of funny, to have six-year-olds cooking at the stovetop—but I chose champorado. My mom was definitely stage-mom-ing in the background. But I loved doing that, and after that assignment, whenever I would be making food or fixing up something, I would just talk to myself and pretend I was on a cooking show. I always loved cooking, and also the teaching element of cooking.

How do you go about choosing which dishes to feature? Is there a long running list of recipes that eventually you want to make?
When I set out to do my first 12 recipes at the beginning of 2020, I had chosen somewhat randomly based on my favorite things to eat. The first one on the list was adobo, the classic. I started out making adobo, and it was a lot of FaceTime with my mom. I was putting my phone up to the sauce so she could tell me if it was right or wrong. But when I talked to her more about the history of it, she wasn’t as sure, and my dad wasn’t either. They both guessed it was brought by the Spanish. And when I started to do research on adobo, I found out that my assumption that it was brought by the Spanish was completely wrong.

It was really enlightening to see all of this research and evidence that cooking in vinegar, which is what adobo is, was performed by indigenous people before the Spanish arrived. They were already cooking meat in vinegar. That really pushed me to change how I wanted to approach the Sago Show. At first, I was kind of like, “Yeah, it’s going to be 12 recipes, and I’m going to give you some fun facts and findings about adobo.” But my initial learning about adobo altered my perspective, in that I wanted to really look beneath the surface of a lot of the food histories, because now I had this lingering question: How does this tie back to colonization? How does this tie back to American imperialism? What are the indigenous histories behind this dish? I pushed myself a lot further after I did the adobo episode, because I knew I wasn’t going to be satisfied just giving a few “fun facts” here or there—that there was really something that I wanted to say, and something that I wanted to learn on a deeper level than what I set out to do.

I feel like, typically, anytime I see adobo recipes, they’ll always mention this is the national dish of the Philippines. That’s always just been a fact I’ve accepted, but never really questioned why, and what does it mean to be a national dish, to represent an entire country, when there are so many regional differences and experiences?
The adobo example in itself—that it’s from pre-Spanish colonial times, but we all see it as a Spanish dish—I really think that’s a microcosm of how I was looking at myself as a Filipino and how I was looking at our culture as a colonized one. And that was it. It was then I realized that I wanted to look further into our indigenous roots and just what was beneath the surface, because the way I looked at myself as a Filipino before that was quite simplistic.

How do you feel that your own relationship with Filipino food has evolved?
When I’m looking at a recipe, and I see the ingredients, I have a better understanding of where that dish might have come from. Like, if it has a very heavy tomato base, then it makes me think, “This is probably one that was introduced during Spanish colonization and then evolved from there.” Whenever I see processed products, like American cheese or canned meats, then I think about the time the Philippines was colonized by the United States. An additional thing that I think I’ve learned is that I no longer have this need for American society to accept Filipino food. That’s no longer really my focus. Early on, I realized that what was more important to me was the college student that is thousand miles away from home, nowhere near their parents’ cooking, and they want to be able to make adobo in the kitchen, or someone who is grappling with their Filipino identity, and they think that learning more about food would help, kind of like it helped me. The most important thing to me is giving other Filipinos access to their food so that they can cook it for themselves—and also to their history. Because I know, for me, I didn’t take Asian-American classes, I didn’t take Filipino-American classes in college. We didn’t have a lot of that education growing up, in K-12 education. So I feel like, working on the Sago Show, I’m kind of having to catch up and create my own curriculum. And if someone else can benefit from that, it makes me really happy.

I have to ask: I know you have strong feelings about the Bon Appétit halo-halo recipe from 2016. How do you feel about their most recent reissue of the recipe?
I had a feeling you were going to ask about this. When I first saw that article, I had a lot of frustration that people were going to read it and think that was actually halo-halo. I wondered a lot about whether they were making the choice to alter the recipe because they thought that the real halo-halo recipe wouldn’t fit an American palate. I had a lot of frustration, you know, like, why couldn’t they have someone Filipino who could tell us about the textures of all of the ingredients, and how they’re integral to the dish? And to celebrate it as this super amazing and sweet and comforting dessert. When I watched the new, updated video, it was super fun to watch. I love how they’ve had a lot of fun with it, and they had all of the ingredients. It was everything that was missing in the first recipe, and Tiana [Gee] and Harold [Villarosa] did a really great job.

You pretty much created your own syllabus, which is amazing. Is there a dream episode that you would love to make, but haven’t yet?
I would love to up my baking game and I think my dream would be sans rival. But a lot of people have asked me to bake it, including my family. And I’m like, you guys know how hard it is?! But that would be a dream episode for sure.

Where are you currently with the third season?
It’s all about the state of the coconut farming industry in the Philippines. I’m wrapping up that season right now. This was a really interesting season to work on, because it was the first one where it was all centered on one ingredient. I wanted to go deep into the coconut as an ingredient and the coconut industry, because I felt like, as a Filipino that’s living in the United States, it’s really easy for me to not think about issues that are affecting a lot of farmworkers in the Philippines. That was a way for me to develop a better understanding of what was going on and share that with other people. Plus, I love coconut, and I love using coconut as an ingredient, and I know a lot of other people do, too, so I thought that folks would be interested in learning more about it.

What’s the response been like from viewers?
I love connecting with other Filipinos who reached out to me after they watched the show, because when I set out to do this show, my goal was really to commit to working on my own identity. I ended up putting it out there online, because other people were able to share that and watch what I created. I get to have really good discussions from it, and I feel like that helps me keep my intention alive from the very beginning. And maybe if I didn’t make it a video series, and I was kind of just doing it on my own, I might not have met the folks that I’ve met.

OTHER BOOKS TO BUY, COOK, AND READ FROM

Last week, we spoke with What’s the Difference? author Brette Warshaw to discuss the food questions you were afraid to ask.

I Am a Filipino, a favorite of Lucero’s, is as much of a cookbook as it is a cultural and historical lesson about the thousands of islands that make up the Philippines.

Nadiya Bakes, from Great British Bake Off winner Nadiya Hussain, includes 100 recipes that will set you up for scone, cookie, and cake success.

Sheldon Simeon is putting his own spin on the Islands’ flavors with furikake ranch and birthday cake butter mochi in Cook Real Hawai’i.