Get a free recipe
Subscribe
The Food Questions You Were Afraid to Ask
By: Anna Hezel Illlustration: Nick Hensley 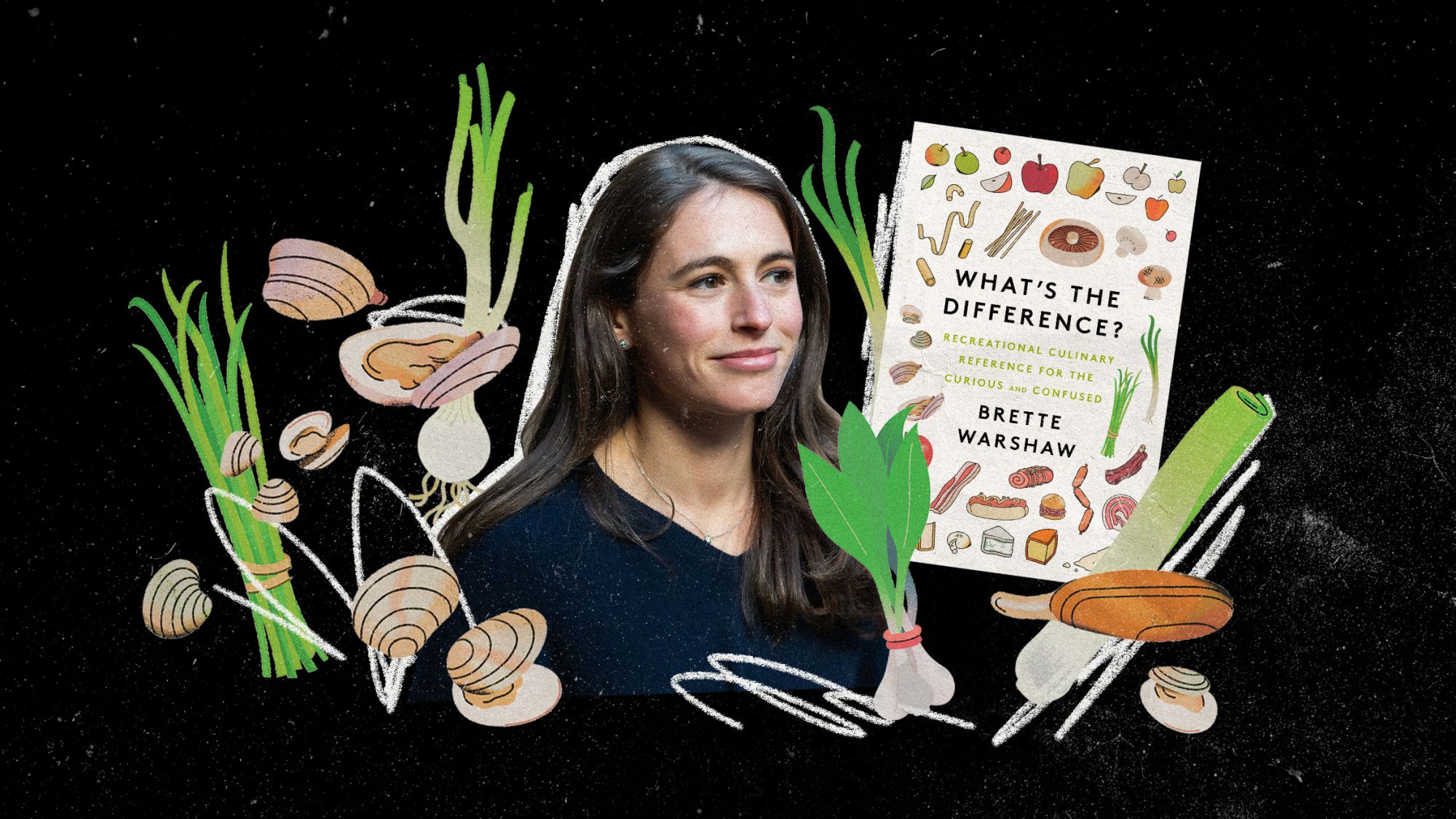 What’s the difference between cage-free and pasture-raised? Or parmesan and Parmigiano-Reggiano? A new book by Brette Warshaw has you covered.

When you’re an experienced home cook, it can be tempting to think you know it all. You have your well-worn systems, your kitchen hacks, your go-to brands for everything from vegetable oil to all-purpose flour. Yet, every once in a while, a question will come up in conversation that totally shatters your world and makes you realize how little you really know. What’s the difference between prawns and shrimp? What makes some fizzy water “seltzer” and some “club soda”? And what designates certain cornmeals as “polenta” while some are considered “grits”?

In What’s the Difference?, food writer Brette Warshaw puts the answers to these sometimes technical, sometimes semantic, sometimes philosophical questions at our fingertips. The book brings together knowledge from authors like Rose Levy Beranbaum and Harold McGee, expertise from chefs, USDA guidelines, and plenty of science into no-nonsense explanations that will stick with you the next time you’re in the grocery store trying to make sense of a confusing label. I talked to Warshaw about how the project came about and why some of these questions were surprisingly complicated to answer.

What’s the Difference? started as a newsletter back in 2018. What made you decide to start the newsletter?
I was working as a freelancer at the time, and I guess had a little bit of time on my hands, but I also had a debate with a friend about the difference between a sweet potato and a yam, and I was pretty disturbed that I didn’t really know the answer, so I obviously had to go down a real rabbit hole to realize there was something interesting to be learned from that. And then I realized that I had a lot of other, related questions about differences between things, and I started doing the newsletter, and it spiraled from there.

So many of the categories in the book seem on the surface like they could be explained in a sentence or two, but the distinctions and differences turn out to be much more complicated! What were the topics that sent you down the biggest rabbit holes while writing the book? And what really blew your mind?
The sweet potatoes and yams one was a perfect example of something that actually had way more stark differences than I realized, and I did not know that we had all been fooled.

Tomatoes—there are obviously a lot of different types of tomatoes. And you could probably answer about the differences on a surface level, but there’s a lot of science behind it. I found myself reading scientific papers about phenotypes. You find yourself in these weird places in scientific academia, and you’re like, “I did not expect to get here!”

Crispy vs. crunchy—that had some scientific studies behind it, so that was a cool one to get into. Also, the differences between barbecue and grilling. I kind of knew that was going to be a big topic, because those are two big categories of food, but it got a little more philosophical than I realized.

If you had to pick one of these chapters to write a whole book about it, what would it be?
I would be not at all the right person to write about it, plus there are real books about it, but a topic I wish I could have gotten into more was rice. I did pretty basic stuff—the difference between short and medium and long grain, and also the differences between jasmine and basmati and some of the more well-known rices. But I think that is a topic where there’s so much that I could have gone into, and there are some really great books on the topic that I consulted but also want to learn more from.

The English language is famously complicated and convoluted. How many of the answers to the questions in the book came down to semantics? I’m fondly remembering the chapter about cobbler vs. crumble vs. crisp vs. buckle, and on and on.
Oh, yeah. Most of the time those didn’t really make it into the book, because I would have an idea and then go looking for the answer and just realize they were two different things, and it wasn’t particularly interesting. One that still bugs me—even though it is in the book—is the difference between a frosting, an icing, and a glaze. A lot of dictionaries said that a frosting and an icing are the same thing, but that doesn’t feel correct to me. I talked to some baking experts who also agreed that they’re not the same thing, but they couldn’t really give a straight answer about the real difference, because frosting might be one thing in one context, but if it’s on a different baked good, it’s called something else. That’s one where I wanted there to be a real difference that I could point to so badly, and I couldn’t find the thing. But I still included it because I thought it felt worth exploring.

A lot of the topics you dig into—wine and barbecue both come to mind—have really serious communities of professionals and enthusiasts. Have your definitions in those categories been controversial at all? Any blowback from hardcore barbecue folks or enthusiasts on other topics?
Not yet. I welcome all criticism, and I’d love for enough people to read this to have someone take issue with it. I spoke to a reporter about it, and he was like, “Oh, you really have some hot takes on parmesan vs. Parmigiano Reggiano.” But my hot takes are not because I’m shaming parmesan. It’s mostly because I feel like we’ve been lied to, and I want to set the record straight.

Reading this, I picked up a lot of great cocktail party conversation topics, but there’s also a lot of really helpful demystification of grocery store items in here. Like, how does someone make an informed decision about whether to buy cage-free eggs vs. free-range vs. pasture-raised? Did writing this book change the way you shop for groceries?
Yeah, definitely. I think the egg one is a perfect example. I will now spend a bit more money on eggs. And, again, that’s not to shame people who buy the cheapest eggs. I used to be that person, too, and sometimes I still am. It’s just about knowing what to look out for. A lot of my decision-making processes before were like, “What’s the least expensive?” or, “What have I kind of vaguely heard about before?”

The oils chapter, too. I think I knew, going into this, many of the differences between the neutral oils, which is that there is no difference practically. But it did empower me in that case to buy whatever neutral oil I need, but also to experiment with some more flavored oils—like the super-intense toasted sesame oils I really enjoy cooking with.

Which eggs do you buy now?
I try to get ones that have the Certified Humane stamp. That’s what I look for. I also like brown ones, just in general, because it feels like I’m being more homey.

Other Books to Buy, Read, and Cook From:
Looking to become more of a fish sauce expert? Here’s a starter kit of all the best books, recipes, and products to get you cooking.

Josh Niland just might be the most famous chef in the world of “scale-to-tail” cooking. In his new book, Take One Fish, he shows how to apply this philosophy to 15 types of fish.

Ali Rosen’s Modern Freezer Meals will change the way you think about this underrated kitchen appliance.

Tequila and mezcal have much more versatility in drinks than cocktail menus would have you believe. Get to know some of these agave liquors’ best tricks with Robert Simonson’s Mezcal and Tequila Cocktails.