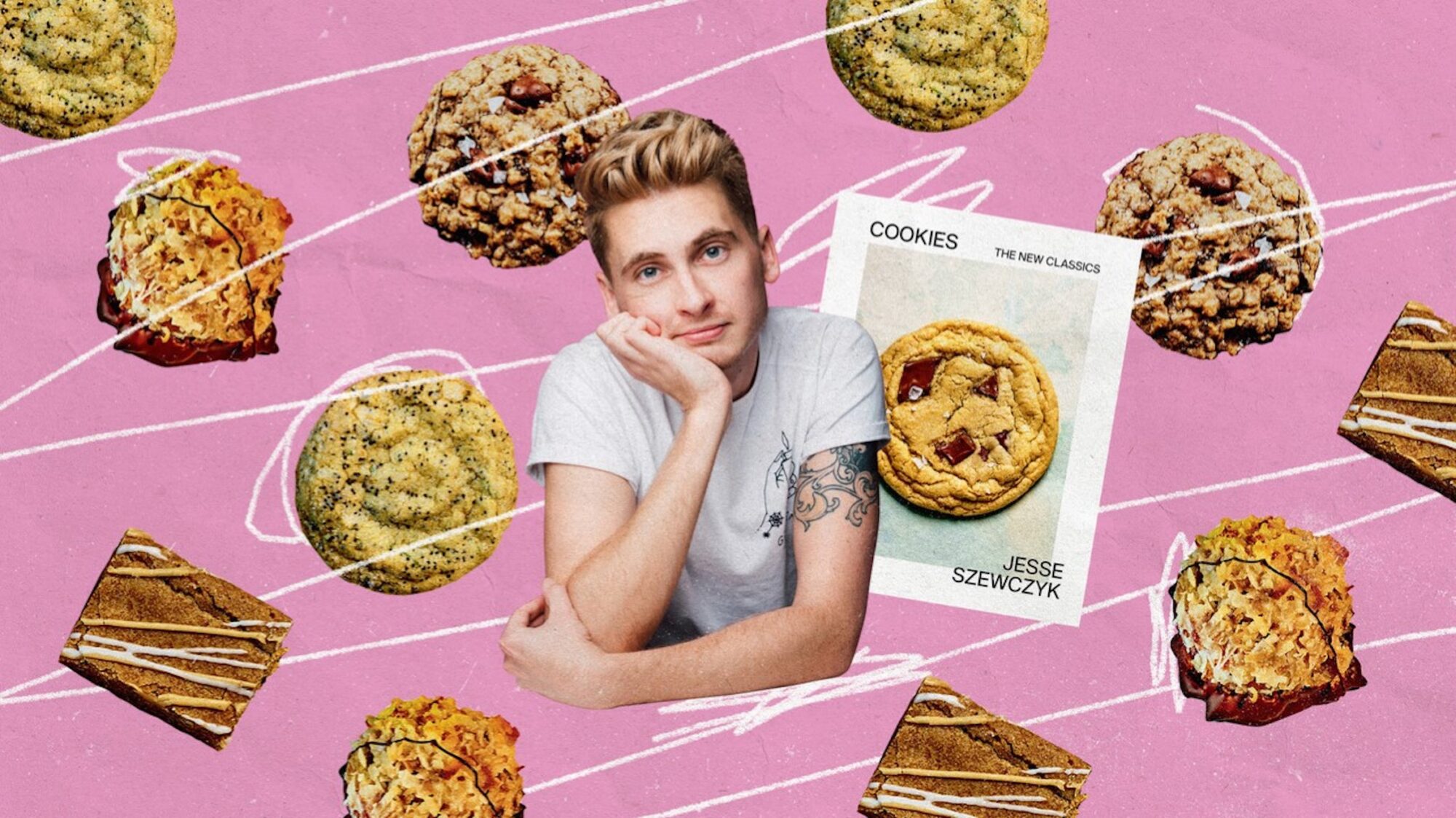 Jesse Szewczyk thinks there’s no better time than now for a batch of pineapple and rum macaroons or cinnamon sugar speculoos squares.

Jesse Szewczyk knew that he couldn’t rewrite the classic chocolate chip cookie or snickerdoodle recipe. So instead of forcing invention, the cookbook author and current studio food editor at The Kitchn decided to break new ground with his latest book, Cookies: The New Classics. This to the tune of matcha amarettis, a caramelized pineapple cookie made in a skillet, and a pile of fresh ways to bake your way into spring.

Szewczyk was an amazing guest on the TASTE Podcast, and I wanted to get in touch for our Monday Interview to find out more about his recipe process, his work as a cookbook food stylist, and his dream Panda Express recipe (this from a former restaurant recipe consultant).

Do we have permission to bake cookies year-round and not just around the holidays? I feel it’s too often relegated to that period.
I never thought of Cookies as being a holiday cookbook or one that was tied to a specific season. To be honest, I’m not much of a holiday person myself, or one that participates in holiday cookie swaps. During the holidays, we are limited to using citrus, spices, and other winter-specific ingredients, but in the warmer months, you can start making cookies with all kinds of fresh produce. Baking outside the confines of the holidays allows you to incorporate unexpected flavor profiles. Throw some fresh berries, mango, or herbs into your dough, and suddenly the cookie feels fit for a summer picnic. Cookies are so often tied to a specific time and place, and by removing those confines, you make room for creativity to steer them toward places they don’t usually go.

When developing the recipes for Cookies, how did you bring freshness to a category that is covered a hundred times over each year?
I knew that there were hundreds of already perfected snickerdoodles, chocolate chip cookies, and blondies out in the world, so I really wanted to create a collection of recipes that didn’t exist already. I wanted to create something new and exciting. I started by making a list of a hundred hypothetical recipe ideas that simply sounded cool to me and slotting them into rough chapter ideas. These were concepts that felt fresh, unusual, or fun. I tried to incorporate influences from pastry chef culture and influences from savory recipes. From there, I backed into the recipes to see if they were even possible to execute. I developed the recipes backward, developing them name first so the idea would remain the same.

What is the most common question you get asked about cookie baking—and what is your answer?
“Why did my cookies not spread?” or “Why did my cookies come out looking like little mounds?” The answer to both is: You measured your flour wrong! To properly measure a cup of flour, you should lightly spoon the flour into your measuring cup and level off the top with a butter knife. A lot of people dig their measuring cup into the bag of flour, which compacts it and results in significantly more flour than the spooning-and-leveling method. The scooping method can result in almost a quarter cup more flour than the spooning method, so if your recipe calls for three cups of flour, that’s an additional ¾ cup flour you’re adding to the recipe!

What was a really difficult recipe in the book that you ended up nailing?
There is a black forest chocolate salami in the book that was a total pain to develop. I had this vision of logs of chocolate sausage hanging from strings, like in a butcher shop, that I needed to see in the book. It’s a bit of a troll-y, completely-serious-yet-totally-a-joke photo. I really wanted to bring this photo to life, but I just couldn’t get the texture of the salami right. The chocolate would crumble and fall apart whenever I tried to slice it. I actually ended up using a base mixture of creamed butter and sugar that made the salami sliceable yet firm enough when chilled.

Another challenging recipe to develop was the red wine brownie cookies. In this case, I simply liked the sound of the recipe and thought it had a nice ring to it. The issue was that liquid makes cookies very cakey. So, after many attempts, I learned that I needed to brown the butter (which removes all of its water content) and reduce the wine down to a syrupy consistency so it would have a ton of flavor without a ton of water. The cookies eventually turned out nice and chewy with a sharp wine flavor. It’s actually one of the most popular recipes!

I have to ask a follow-up question from our podcast interview. You worked at a company that developed concepts for fast casual restaurants. Have you come up with any ideas recently that you think would slay? This is all for fun and hypothetical.
Panda Express is one of my favorite restaurants, so, selfishly, I’m going to kindly suggest they fully lean into orange chicken innovation. Panda Express orange chicken is the best restaurant dish ever created, so what if they created a whole separate menu (or restaurant concept) for it? I’m talking orange chicken wraps and sandwiches, popcorn orange chicken, ORANGE CHICKEN FINGERS. I mean, come on.

What is your next big topic to cover for a cookbook?
My main goal when writing Cookies was to bring artful, interesting, and unexpected recipes to people without making them complicated. I really wanted people to feel like they were creating something cool and triumphant. Lately, I’ve been thinking a lot about how to expand upon that idea. How can I help bring even more interesting bakes into people’s homes while simultaneously making them even more accessible—so accessible that the recipes can reach a significantly larger audience? I don’t have a fully fleshed out idea yet, but I am interested in expanding on this idea. Ultimately, I just want to help people feel like they baked something really, really cool.

Cinnamon Sugar Speculoos Squares
A good, not too holiday-specific recipe for all you Trader Joe’s cookie butter lovers out there.

Chewy Triple-Citrus Poppy Seed Cookies
Super fresh and zippy, and perfect for these days of the weather turning warmer.