Get a free recipe
Subscribe
Kate Telfeyan Writes About Modern Restaurant Life from the Inside
By: Matt Rodbard Photos: Alex Lau 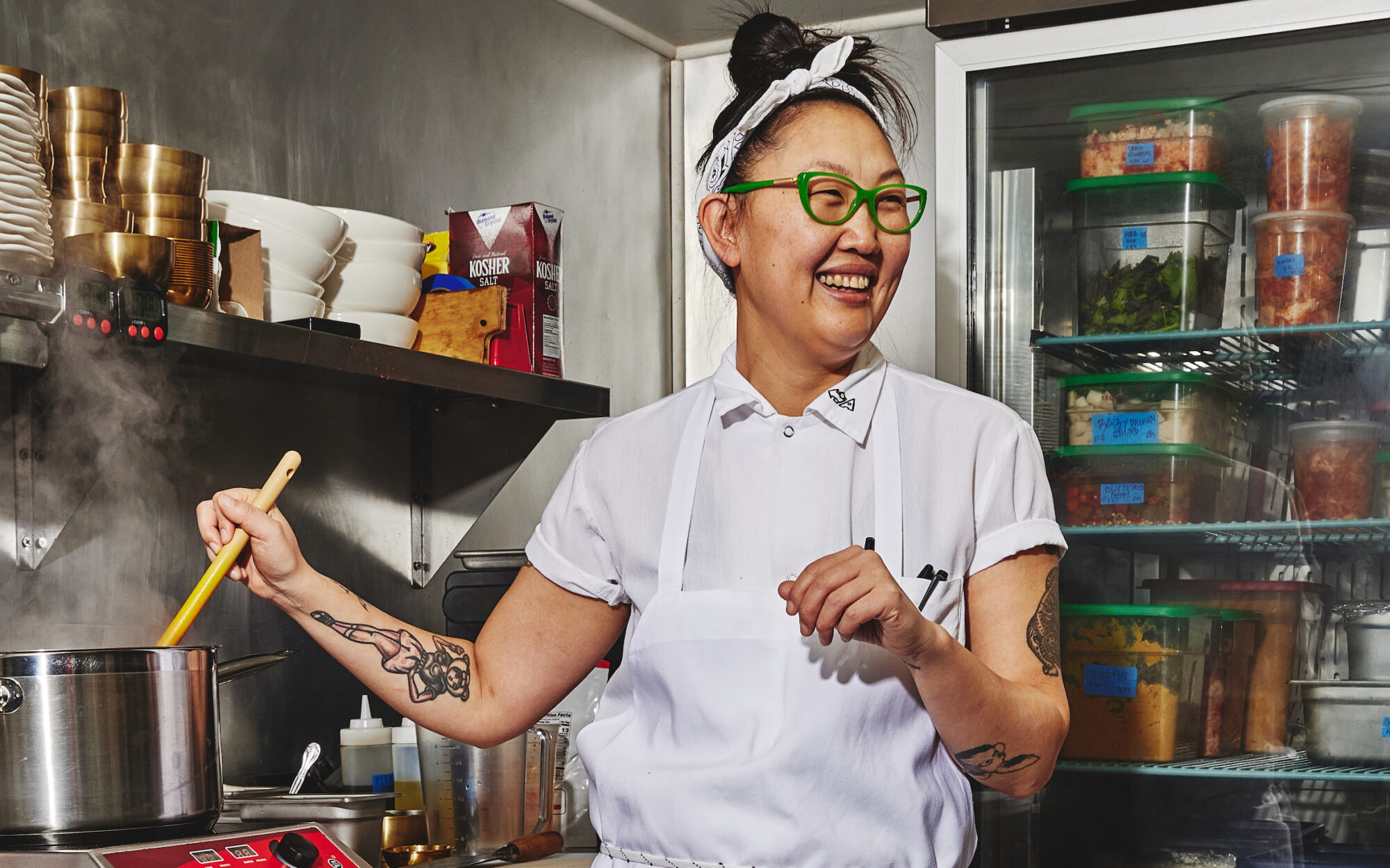 How TASTE’s newest Cook in Residence went from hyping restaurants to cooking her own hype.

I met Kate Telfeyan more than a decade ago while working on a story about grilled pork belly—or was it mezcal negronis? Those were the hot topics in food media, and Telfeyan was one of my all-time favorite collaborators—she was a whip-smart publicist, and I was a writer and editor looking for help telling a story. We lost touch, but I heard Telfeyan had left PR and was working as a line cook at Ganso, a now-closed ramen restaurant in downtown Brooklyn. Epic!

I next reconnected with Telfeyan not through an IRL encounter but through a thoughtful—and at times stinging—assessment of food media’s major blind spots in the New Republic. Her July 2020 piece “How Food Media Created Monsters in the Kitchen” links the rise of celebrity chefs to the media’s thirst for traffic. “Building a better food industry starts with recognizing the complicity that binds celebrity-hungry chefs and click-hungry writers,” she writes. The solution: “We need fewer food writers and more food reporters—more journalists willing to approach the food beat with the determination and skepticism of a good political or crime reporter.”

As TASTE’s latest Cook in Residence, Telfeyan brings together this thoughtful, firm, no-bullshit writing style with the signature “vaguely Asian” (the name of her Instagram account) style of cooking she does at her critically acclaimed Brooklyn restaurant, Porcelain. But before we publish her work, I wanted to catch up with Telfeyan to find out a little more about her backstory—and what excites her most in and out of the kitchen.

Where were you were born, and where you were raised?
I was born in Korea—I’m actually not sure where or what year—and I was adopted in 1982. My parents brought me back to Rhode Island, and I was raised there my whole life. I grew up in a very small town in rural Rhode Island and then went to college in Connecticut—Connecticut College. And right after college, I moved to New York. I really wanted to work in food or publishing, and publishing worked out.

When did food enter the picture?
I graduated and was applying aggressively to the Food Network back then, and any publications that were looking for assistants. That side didn’t really work out, but I got into Simon & Schuster, and I worked there for three years. Then I went into catering, because the food thing kept beckoning. That didn’t work out, so I went into PR.

What was the food like in your home growing up?
My mom was a great cook. Everybody says that they learn cooking from their mom or their grandmother, but my mom was a very sort of instinctual cook. Nothing was very fancy, but it was always very good and very satisfying, and it was always what I wanted to eat. When I was sick, she would make chicken and little tiny pastas and soup. It was all very good, and she just loved cooking so much. 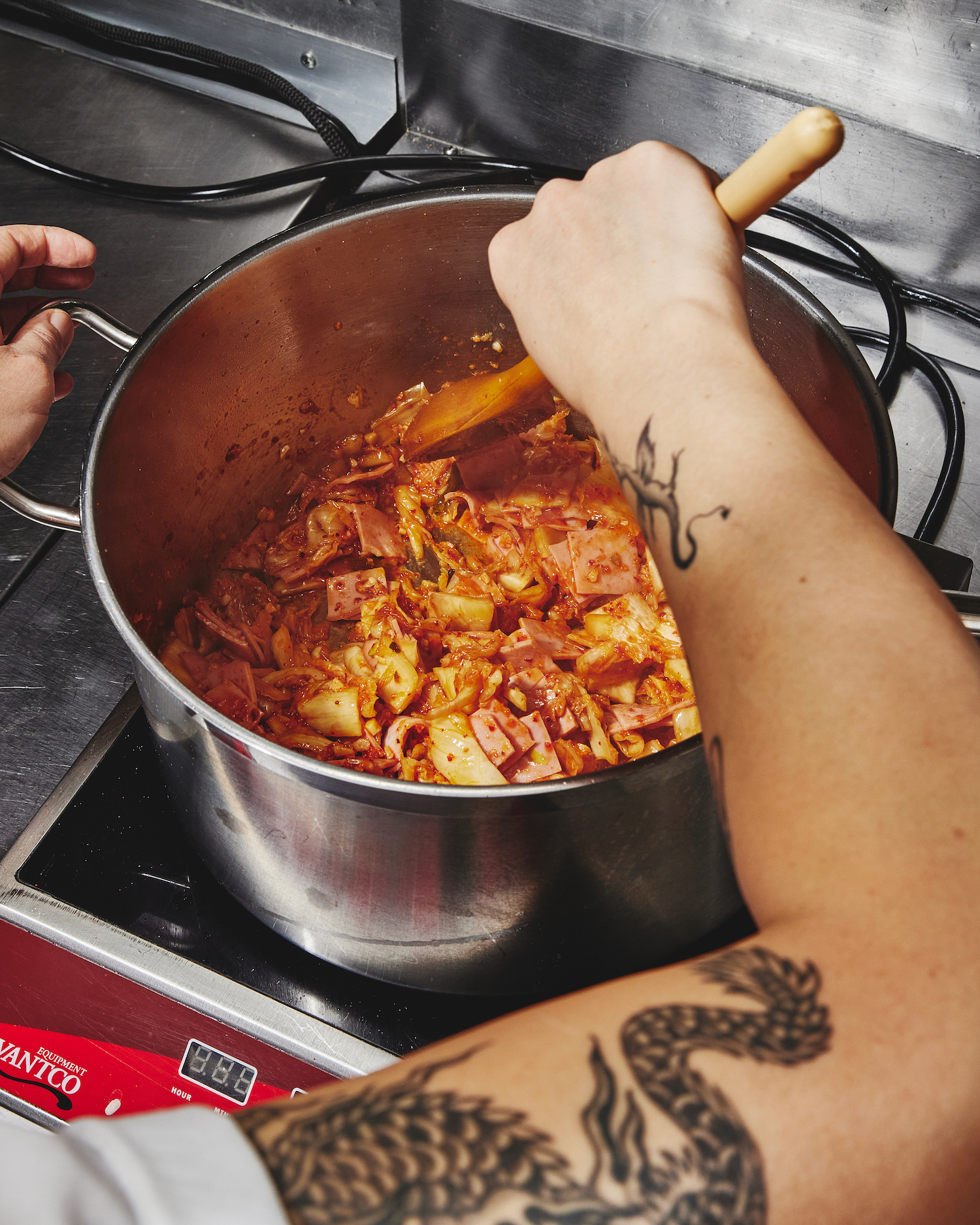 Was there ever Korean food in your life growing up?
Nope. The first time I had Korean food was when I was a senior in high school and my mom took me to a place that had opened in Providence. Neither of us had any idea of what we were doing. It was the first time I had ever tried any Korean food, and I remember thinking, “It’s fine.” [Laughs.] My first introduction to Asian food, like a lot of people, was suburban Chinese food.

You worked in PR for six years. How does that affect how you run restaurants? I’m sure you’ve seen great operators and you’ve seen some of the opposite, so is there one thing you took away from that experience?
It’s about being as true to yourself as possible. I would work with a lot of restaurants that followed the concept of “If you do this, you’ll get press,” or “Do it this way, and I’ll get someone to write about it.” It always felt like the people who stayed very true to who they were were the ones that maybe didn’t get the most acclaim, or they didn’t get the big shining moments, but they had a little bit more longevity.

We’re sitting here the week you just received a really positive review in New York magazine, and you obviously weren’t doing anything to try to bait that. But did you play the game a little?
It is helpful to know about the three visits and the sort of game that the media plays. But I’ve watched a lot of restaurants that have opened around when we opened, and by virtue of the fact that I still follow a lot of people in that world, I know that they’re working with certain publicists, and you can tell—maybe the general public can’t tell, but I can tell—that they’re getting certain stories, or they’re getting certain exposures. And that’s great. I think that everyone has to do what’s right for them.

You aren’t knocking the game at all.
Sure, play it if you want; it’s up to you. But you don’t have to.

What is the most underrated ingredient?
I’d say pepper—black pepper. I really like black pepper, and I think it gets relegated to steak or these very basic things, whereas I often add black pepper to my kimchi-jjigae or to a lot of Asian or Asian-y foods because I really like the different kind of spice it brings and the aromatic nature of it.

Yeah, it’s great for desserts—sprinkling a little bit of savory.
Yeah, you don’t really know what it is.

Most underrated piece of cooking gear?
I’ve waited my whole life to be able to say Ziploc bags.

Aaah!
It’s not really gear, but I love Ziploc bags, and the cooks always make fun of me because they think it’s sort of homey. But they’re incredibly versatile when you think about it. I put stocks in them, and you can portion out proteins instead of doing all the plastic wrap. 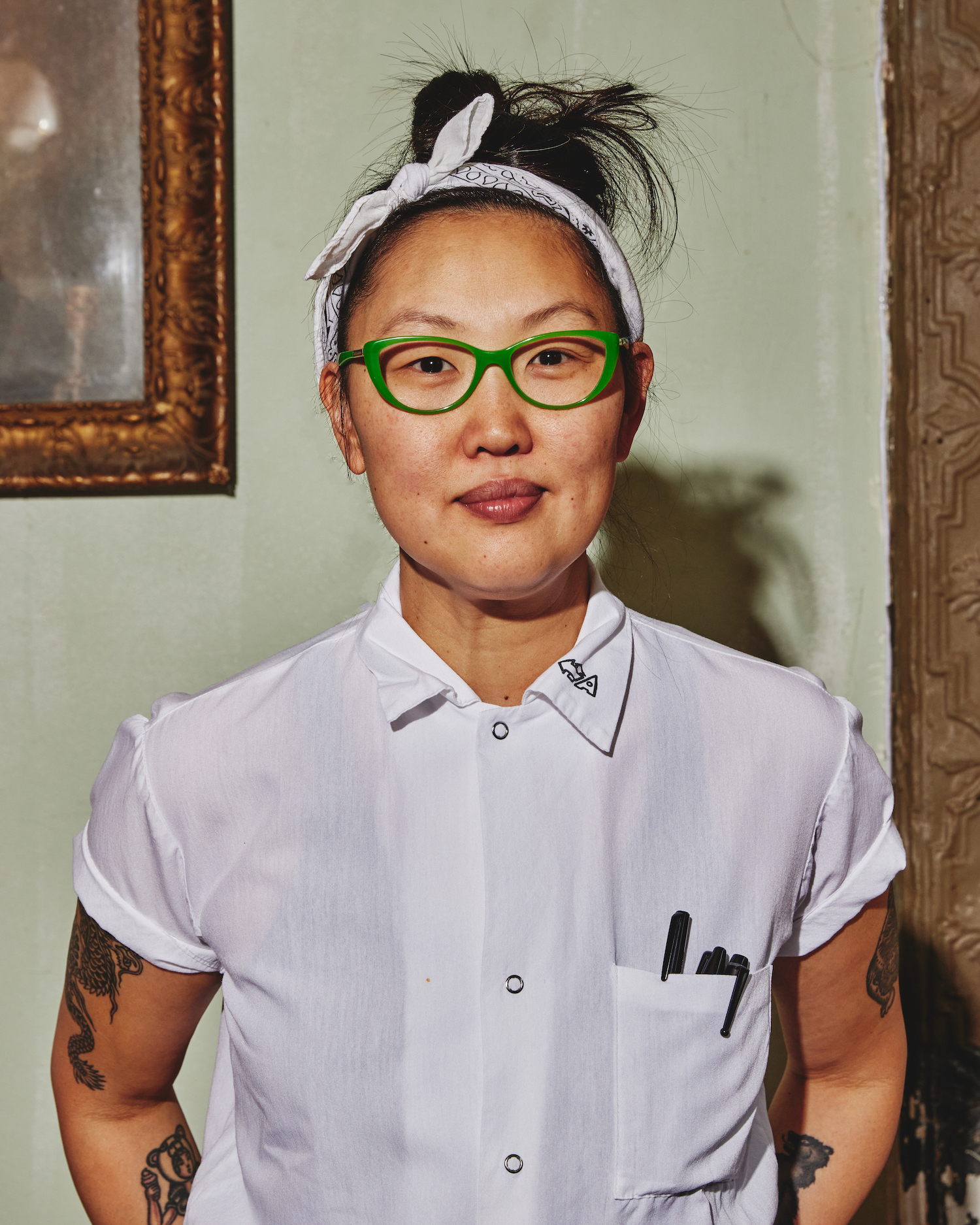 Three favorite cookbooks?
That’s a tough one. I would say Joy of Cooking; that was very instrumental in my youth. Gotta say a Fuchsia Dunlop book.

Every Grain of Rice?
That was the first one I got. That was obviously pivotal. But I really liked the follow-up that was the less spicy one—The Food of Sichuan. And I like Eat With Your Hands by Zak Pelaccio.

Cool. Why that last one?
Well, obviously, I have a personal affection for him, based on my experience working with [Fatty Crab and Fatty ’Cue]. But it’s also a very relatable cookbook. It’s intricate in ways that are a little too complicated for the home cook sometimes, but the way he wrote it was, I think, ahead of the time—back when it was like, “Here’s what you should drink when you’re making this recipe,” and “Here’s what you should be listening to.” It’s a whole vibe, you know?

Prescriptive recipes—I’m with you. And he has a great voice, and he definitely knows how to write. What about for you as a writer? What cookbook would you want to write?
It wouldn’t be terribly recipe-driven.

Perfect. Even better! Why?
Well, because I hate recipes. [Laughs.] They’re really great for structure—I read tons of recipes, and I read them as a sort of textbook. But I think that cooking is so much more than just a recipe. It’s about what inspired the recipe, or the experience you have while making it, or who you want to make it with. That’s why I think Zak’s book was so smart; that’s how I would want to read a cookbook or write a cookbook—in a way that is approachable and that is more evocative of who I was as a person, which is less formulaic.

What would you like to be doing in five years?
I want to still be serving a community—whether it’s this one, I’m not sure, but any community. I see it as the only way for me to stay in this industry—to be able to do it equitably. To be able to serve a community and to have fun. I never want to get to the point where it’s for the bottom line. I’d love to get to a place where it is possible in New York to have a reimagined type of business model. I think some people are trying, with the co-op ownership model or community space—like a community café where there’s no real chef. That was something I was really interested in during the pandemic—just having a space and providing a space for people I knew.

Someone I used to work with spun off and started making bread during the pandemic. She was a baker, but she started a very successful bread business out of her apartment. And I know a lot of people did that. Plus, my line cooks have their own ambitions and dreams, and having a space where they could have a platform to share those would be amazing. [I’m imagining a] sort of co-op space where you buy in, and you get to put whatever you want out there in the world