Get a free recipe
Subscribe
Before Impossible Burger, There Was the Vegan Chinese Kitchen
By: Aliza Abarbanel Illustration: Nick Hensley 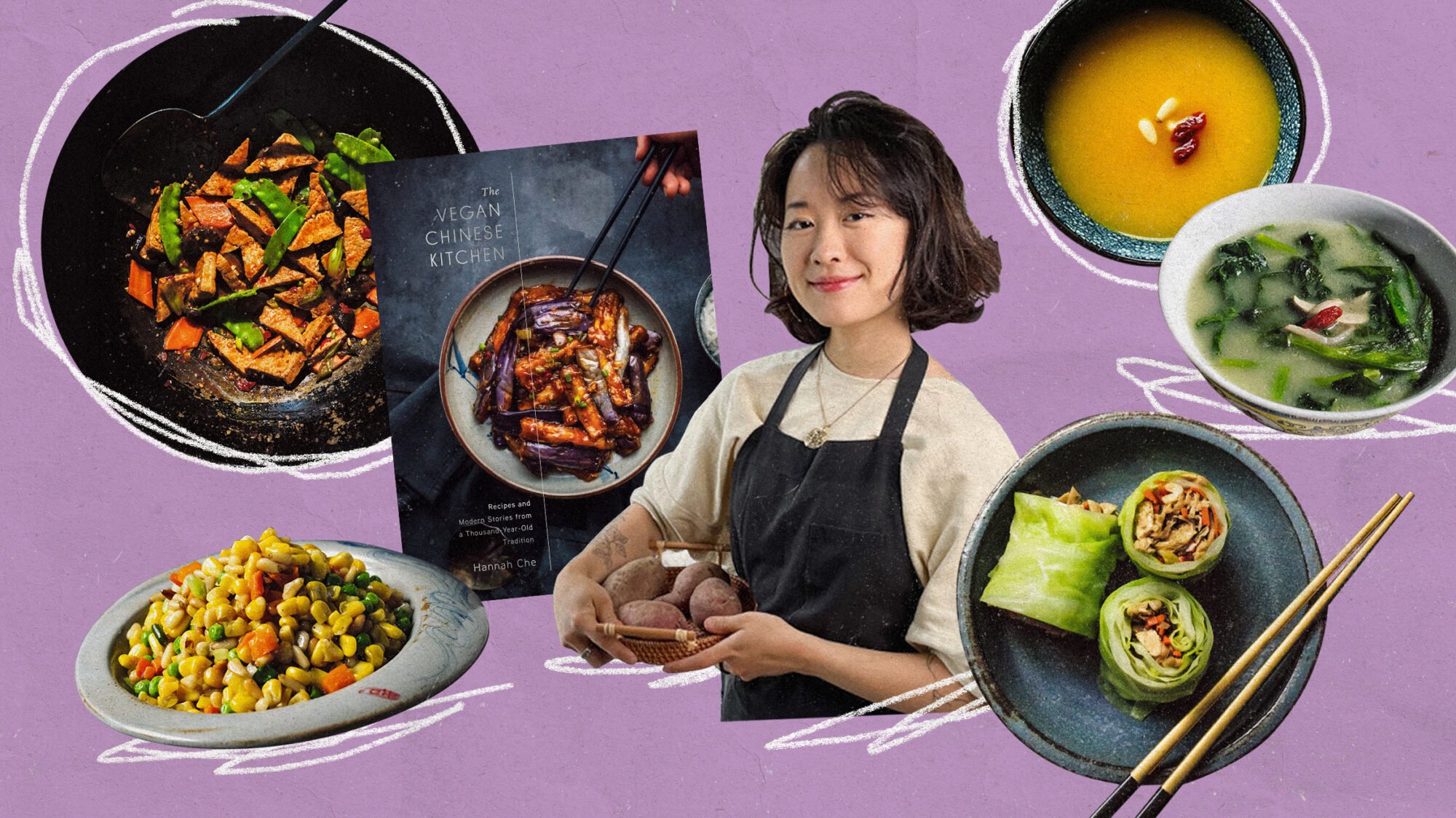 When Hannah Che decided to become vegan in 2015, the plant-based foods landscape was boringly predictable. Blogs and social media were populated with what can only be described as “bowl food”: chia-topped smoothies, whole grain salads, and pureed coconut soups, all served up in shallow ceramics.

Eager to immerse herself in vegan culture, Che stocked the pantry with chickpea pasta and began trawling Pinterest for overnight oats recipes. And when she returned home from college during winter break for her family’s Lunar New Year celebration, she didn’t help fold the tender pork dumplings—instead standing to the side.

“Before I went vegan, I just viewed food as ingredients on a plate,” she says. “When I started learning about factory farming and its implications on the environment, I realized food was so intersectional with culture—including Chinese culture.”

Unwilling to sit out of family gatherings or feel disconnected from her culture, Che began studying the rich traditions of Chinese vegetarian cooking, which was developed in Buddhist temples and palace kitchens hundreds of years ago. (Before there was Impossible Burger, there was mock meat that mimicked the texture of eel or pork with mushrooms, gluten, and soybeans). She launched a cooking blog, The Plant-Based Wok, traveled to vegetarian communities around China, and enrolled in Guangzhou Vegetarian School, the country’s only professional vegetarian cooking program.

Che’s learnings are all found in The Vegan Chinese Kitchen, a collection of highly cookable recipes rooted in umami-packed traditions. Her approach highlights seasonal produce (stir-fried corn and pine nuts! tomato noodle soup!) alongside chewy noodles and the full kaleidoscope of tofu, from fermented to smoked and five-spiced. I called Che to talk about the evolution of vegan cuisine, including MSG on ingredient lists, and how the future of plant-based eating might be found in looking to the past.

“I think the perception of plant-based food has changed a lot, and now, when I think ‘vegan food,’ I don’t think of a particular kind of dish or aesthetic—I think of every culture’s plant-based traditions,” she says. And as her recipes demonstrate, China is a delicious place to dig into the past.

What was the first recipe—or first few recipes—you knew you wanted to include in this book?
When I started thinking about this book, there were three categories of recipes I felt I could include. First there’s temple cooking, which was developed at Buddhist monasteries in China. A lot of these dishes don’t use alliums like garlic, onions, or scallions and are intentionally subtle in flavor. That’s super-traditional vegan Chinese food.

The second category is palace cooking, which was developed in imperial kitchens over the centuries for banquets. This is where you get mock meats like vegetarian duck—dishes that are meant to replicate the look and taste of meat for nonvegetarians like the royal court for lavish banquets.

The third one is what my book is ultimately focused on: home cooking or popular vegetarianism, which was happening not in temples and palaces but in the homes of common Chinese people. These are the types of dishes that my parents would make or that I’d have at the home of a Chinese American friend growing up: endless variations of vegetable dishes to eat with rice. It shows how delicious, nourishing, and heavily vegetable-focused Chinese cooking can be.

You trained at the only professional vegetarian cooking program in China before developing this book. What did you learn there and bring into this book?
What I learned is how Chinese cooking is different from other forms of cooking. You don’t have four things going on one stove, with something reducing here and sautéing there. There were no ovens, and you used one burner. If you need to boil or fry anything beforehand, you’re using the same wok.

A lot of Chinese cooking is about the preparation aspect, because the actual cooking time with a wok or sauté pan is so minimal. Most of the work is preparing the aromatics. I kind of already knew this, because that’s how my parents cook, but at school, I really started viewing dishes in terms of their components: the aromatics, main ingredient, secondary ingredient, and then the seasonings. For every dish, you prep each component and lay it all out before you fire the wok. 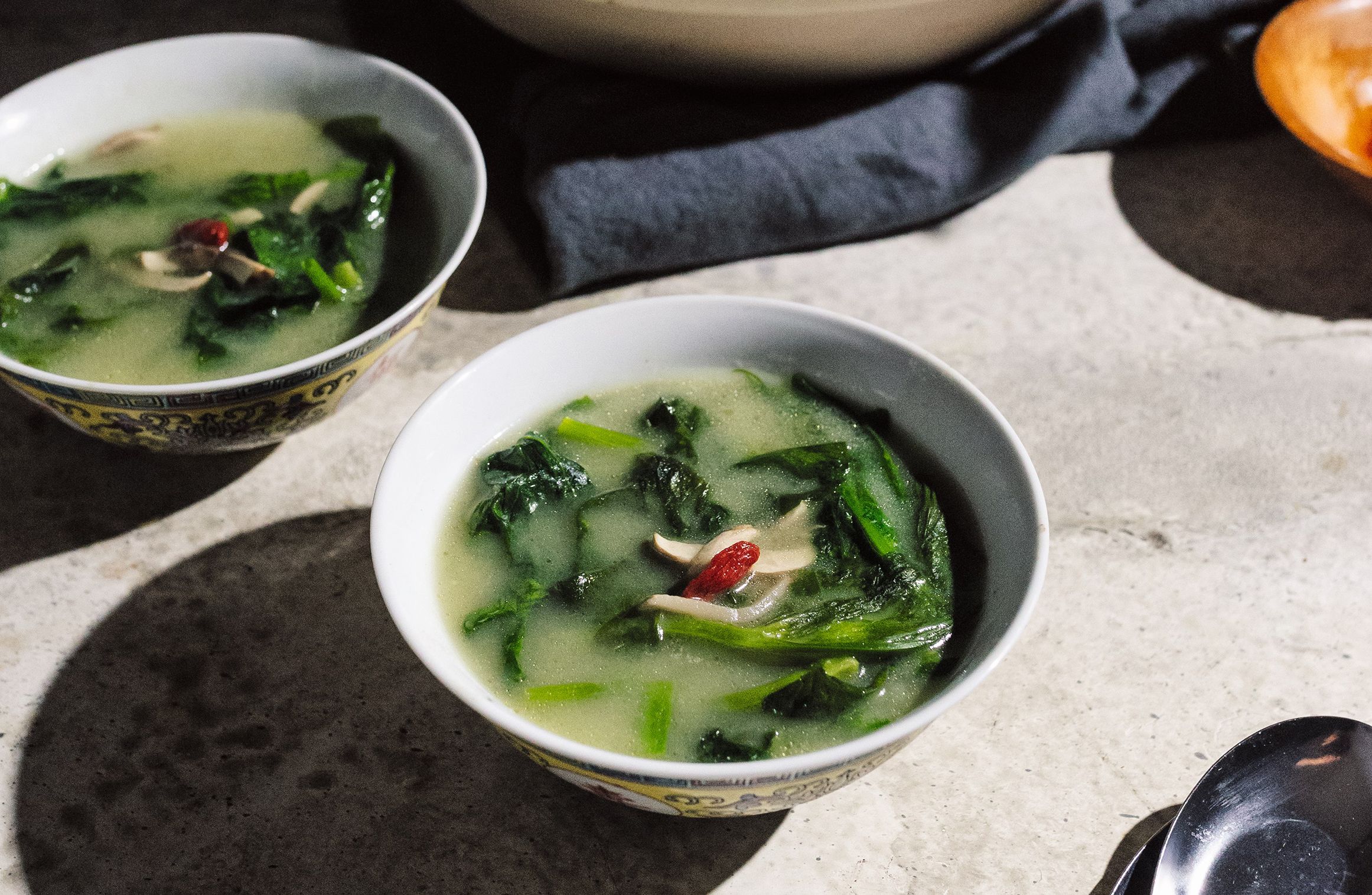 Pea shoot in a silky soup

I appreciated your section on MSG as a valuable pantry ingredient. Why did you decide to write about this, and what does MSG add to vegan cooking?
When I look up recipes online, I rarely find one that lists MSG in the ingredient list. When I see it, it’s surprising to me! But if you have a recipe with 2 tablespoons of nutritional yeast, in vegan recipes especially, it’s very normalized.

Even when I post recipes on Instagram with an optional quarter teaspoon of MSG, there will always be a few comments saying, “Why is there MSG in this dish? That makes it not healthy.” But there are also people responding saying, “Oh, don’t you know that’s not scientifically proven?” So I see people who still have a negative perception, but also more and more people learning about what MSG is and how useful it is in cooking.

Even when my parents saw some of my dishes with MSG, my mom said, “That’s not healthy.” But when I explained it to her, she said, “Oh, yeah, your grandparents use it all the time.” She actually had come to believe that MSG caused all these symptoms through all the messaging and living in the United States for 30 years. But now she’s started using it again.

What do you think about the fake meat boom?
I personally love that there are so many more plant-based meats on the market. I don’t regularly buy Impossible or Beyond Meat substitutes, but if I’m cooking for a meat eater who isn’t very convinced about plant-based eating, I’ll buy some and blow their mind. For me, this market is getting more meat eaters to eat plants in a spirit that’s kind of similar to the Chinese tradition of mock meats. These mock meats weren’t for the Buddhist vegetarian population—they would be cooking simple vegetables. It was a tradition that was meant for hospitality, to welcome other people who did not always eat vegetarian.

Now, the rising plant-based meat market in the West has made some Chinese people be like, “Hey, we’ve already had this tradition for literally millennia—how can we still remain in this tradition and also think of mock meats as this ingredient that all eaters can use?” Omni is a Hong Kong–based company making plant-based pork. A lot of Chinese people won’t use ground beef—that’s for hamburgers—but this pork product can be used in Chinese dishes like mapo tofu. I’ve also seen restaurants giving banquet-style mock meats like vegetarian roast goose a more modern, cool plating. I find this combination of tradition meeting the investor-driven, plant-based meat space in China really interesting, because it parallels what’s happening in the West—only where it originated is also where it’s innovating. 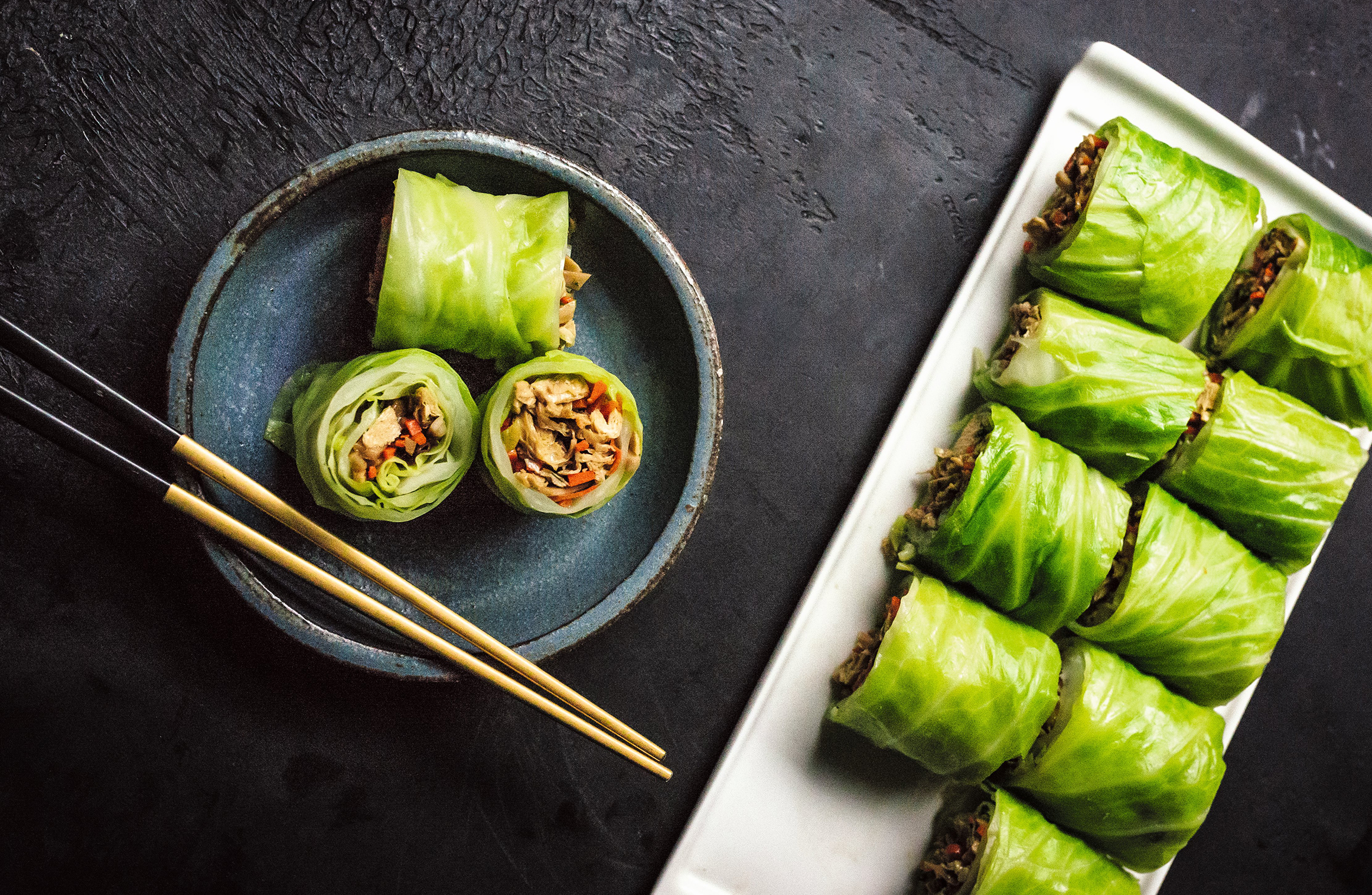 THREE EXCITING RECIPES TO COOK FROM THE VEGAN CHINESE KITCHEN: