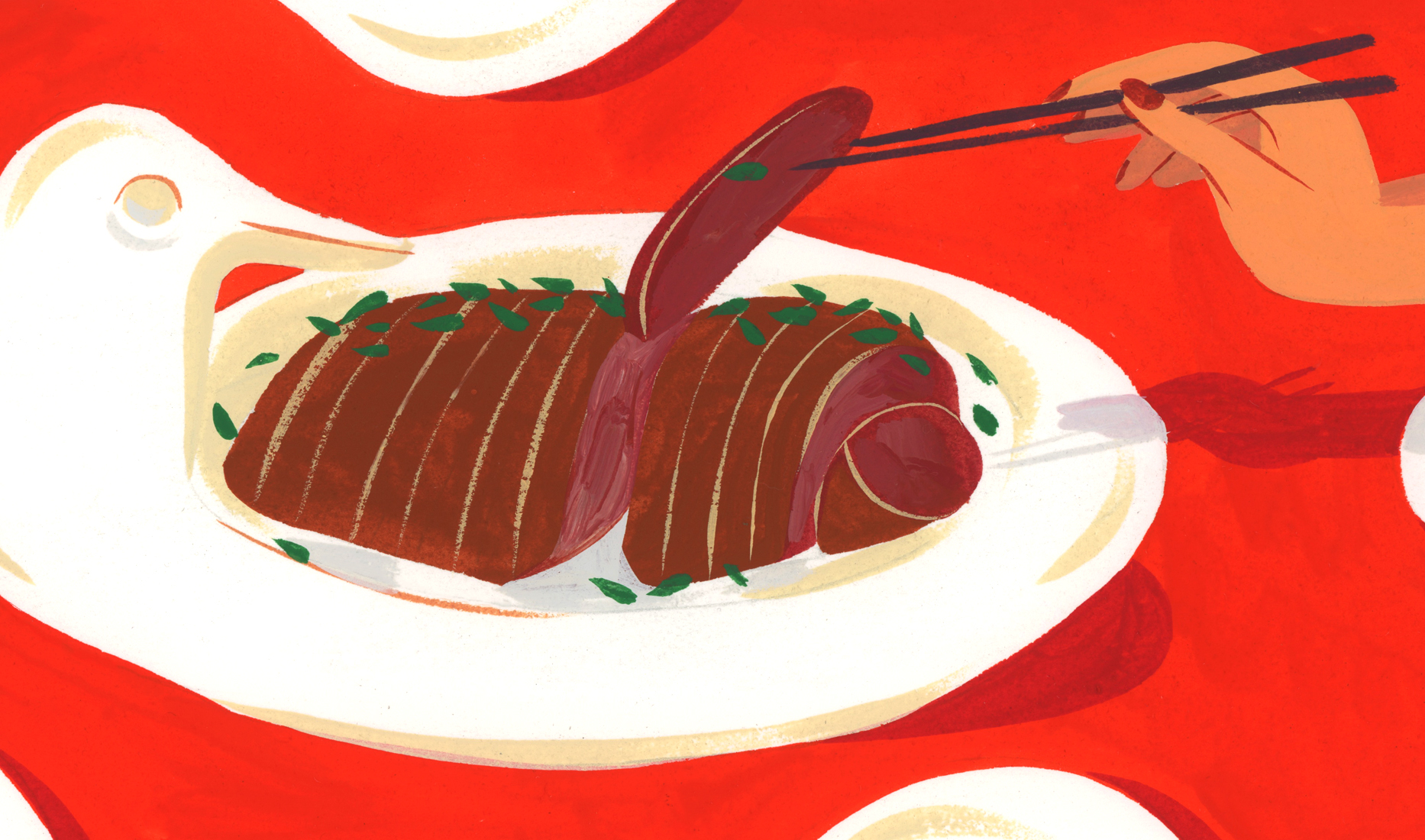 Are we forgetting about centuries-old Buddhist tradition in the current meat-replacement zeitgeist?

Gazing down at the paper plate, I take a few moments to contemplate the meal in front of me. Is that a piece of wheat gluten masquerading as fried chicken, I wonder, poking at it with a chopstick? A speckled roll of yuba resembling steak? A ball of bean curd made bouncy like cuttlefish? Each year brings new discoveries, as I try to identify the animal of inspiration for each plant-based protein nugget doled out by nuns at the cafeteria. It’s sort of like trying to guess the fruit in a bag of Tropical Starburst.

I am at the Chuang Yen Monastery in New York’s Hudson Valley. Since my grandfather’s ashes were placed in an urn on the mountainside here 10 years ago, my family and I have paid visits, often for Qing Ming, a Chinese holiday of ancestral worship. The vegetarian meal served in the dining hall is a highlight—but if you’ve ever gone to any restaurant with the word “Buddha” in its name, then you’ve had this food, too: mock duck, mock char siu, mock chicken, and mock fish dishes galore. Elaborately prepared wheat gluten (sometimes called seitan), tofu, and other plant-based proteins are the building blocks for an inexhaustible variety of satisfying nonmeats that have been honed at Buddhist monasteries for centuries. The iterations never cease to delight me. Perhaps it’s because of my annual monastery visits that I’ve embraced them so richly. But I wonder, do other omnivores feel this way, too?

In East and Southeast Asia, Buddhist or “temple food” traditions have produced meat analogues since ancient times. They’re not really set in stone—save for a few classics, like “mock duck,” wheat gluten that’s been dimpled to resemble a plucked bird’s skin, which can be found in cans and even inspired the name of a famous turn-of-the-century New York City Chinatown gangster.

While mock meat has a place in some temple kitchens, much of the cooking consists of vegetables, rice, and plant-based proteins that have not been purposely twisted to resemble meats. This is especially true in Japan, where Buddhist law prohibited the consumption of four-legged animals throughout the empire for centuries, eventually doing away with the edict in the 19th century. Due to a lack of appetite for meat, Japanese people never tried to imitate it with other substances, says Akiko Katayama, a food consultant and host of the Japan Eats podcast. Similarly, in the heavily vegetarian country of India, you won’t find traditional mock meats for the same reason. “For many Indian vegetarians, I don’t think a meat substitute would even register since meat was never a reference point to begin with,” says Chitra Agrawal, the author of the vegetarian Indian cookbook Vibrant India.

However, in China, the origins of both tofu and wheat gluten are somewhat linked to their use as meat replacements. In Mandarin, mianjin, or wheat gluten, means literally “wheat meat” (George Ohsawa, the founder of the macrobiotic diet, coined the term “seitan” for the same food in 1961). And tofu, a food that dates back to prehistoric times in China, was popularly known as “small mutton” in the 10th century, according to records. Although they need not only to be enjoyed as meat analogs, they have been used as such for centuries. There is mention of seitan textured to emulate goose in the classic Chinese cookery book Recipes From the Sui Garden by the Qing Dynasty Chinese poet Yuan Mei. And the Ming Dynasty novel Journey to the West references wheat gluten several times, including a scene in which demons attempt to serve a monk a meal of human flesh and brains fried to resemble wheat gluten—that is, meat masquerading as mock meats.

Nowadays, you can find plenty of prepared mock meats from producers and restaurants that have spun off these Buddhist traditions. Chris Kim and Rebecca Lopez-Howes have been doing their part to cater them to modern sensibilities with their business, Monk’s Meats, a vegan “butcher shop” in Brooklyn. Kim says that he started tooling around with mock meats in high school, when he became a vegetarian and there weren’t many options for eating out. He and Lopez-Howes launched their business in 2012, when “everything was heritage pork, wrapped in bacon” in the restaurant scene. As a Korean-American, he had tried Buddhist meat analogs but wanted to make something that was more transparent. That meant spelling out what the food is—or what it isn’t. “I get why they call them ‘chickn,’ or ‘chicken’ with missing letters,” he says of the menu items at Buddhist East Asian restaurants. “It’s hard enough to be an Asian restaurant and sell people on food that they aren’t necessarily familiar with.”

The possibilities for mock meats are endless. You can use different types of flours for seitan, for instance, simmer it in endless types of stocks, flavor it with any seasonings, ferment it or not, and prepare it in any way in the world you’ve seen or have not seen before. It’s essentially a blank slate for inventive chefs and plucky home cooks.

“You can do a lot of things and mix it with things to get a slightly different texture, and I find by kneading the mixture in a certain way you can alter the texture slightly,” says Miyoko Schinner, the proprietor of a vegan creamery and the author of a number of vegan cookbooks, including The Homemade Vegan Pantry.

She says it’s all about creating a savory, umami flavor and a chewy, satisfying texture—that is the point of mock meats, not that they clearly resemble any animal.

“Why do people want to eat meat? They want it because of the texture and the flavor, not because it’s a dead animal.”

This attitude has taken on more urgency in recent years, as “Meatless Mondays” and “vegetable-forward” restaurant trends have dominated the popular food vernacular. For reasons of personal health and concern about global carbon emissions, which are much higher for red meats in particular, cookbooks and food personalities have been hailing the virtues of fresh vegetables. And venture capitalists are at war to create cunningly realistic plant-based meat replacements such as the Impossible Burger. Yet amidst this frenzy, there has been a noticable backlash against traditional meat substitutes, with vegan chefs such as Isa Chandra Moskowitz playing down tofu, tempeh, and seitan, and food writers like J. Kenji Lopez-Alt just saying no to faux.

Maybe trying to gussy the stuff up as a piece of barbecued brisket or roast duck isn’t for everyone. But to enjoy seitan and tofu is to appreciate their versatility. That is their greatest strength. Think of them as character actors: Whether it’s a pitch-perfect impersonation of an iconic figure or a wholly new, weird character that they invented—that only they could have invented—their chameleonic efforts are impressive even if they’re not the most handsome, or delicious, as starring-role types.

So in that sense, aren’t we truly appreciating wheat gluten and soy protein for what they are when we play dress-up with them?

To be sure, soy and gluten both have suffered a scourge of negative press in recent years. But most of the theories—villainizing soy as estrogen-producing and gluten as indigestible—have been debunked as bad science. “People always want to know if the food I prepare has soy or gluten,” says Schinner. “But nobody asks, ‘What’s in that; does that have soy?’ when it comes to the Impossible Burger.”

Although they seem to share similar food principles, I can’t really see Alice Waters tooling around with wheat gluten the way Kim does. And although Schinner can perform alchemy with soy protein, I don’t see Wylie Dufresne attempting it. But why not? One would think that flavoring and manipulating wheat gluten would be as creatively fulfilling to a chef as sugar is to a pastry chef. Or, heck, chicken is to any cook.

I ask Schinner if there’s anything to like about the taste of wheat gluten that hasn’t been flavored with anything. “No, but I can guarantee that if you take some chicken and just boil it without any seasoning, it’s not going to taste good, either,” she counters.

Maybe we need to stop looking at these ancient ingredients as meat wannabes and just have fun with them on their own merits—as whatever. And that’s just what I did with them, over a whirlwind week of DIY my-way Buddhist cooking—kneading whole-wheat flour and water into a pliable mass and then rinsing it to extrude all the starches. This produced a stretchy, chewing-gum-like mass that I could surprisingly cut through cleanly and then brown on a pan with oil and ginger (for a dinner of fake beef with broccoli stir-fry over rice) and butter (for a fake Buffalo chicken nugget snack). I had picked up the technique behind basic seitan dough after meeting Kim years ago, when he was just starting Monk’s Meats, and had forgotten all about the pleasure of going straight home after our conversation and making seitan from scratch.

Perhaps the food philosophies of my time made me forget just how easy and fun it is to form wheat gluten into whatever I wanted it to be. And just how good and satisfying it was as a result.

“We just get set in our ways and we think this is what we like,” says Schinner, of the meat-eating diet. “But if that’s what you think, then you really haven’t explored.”