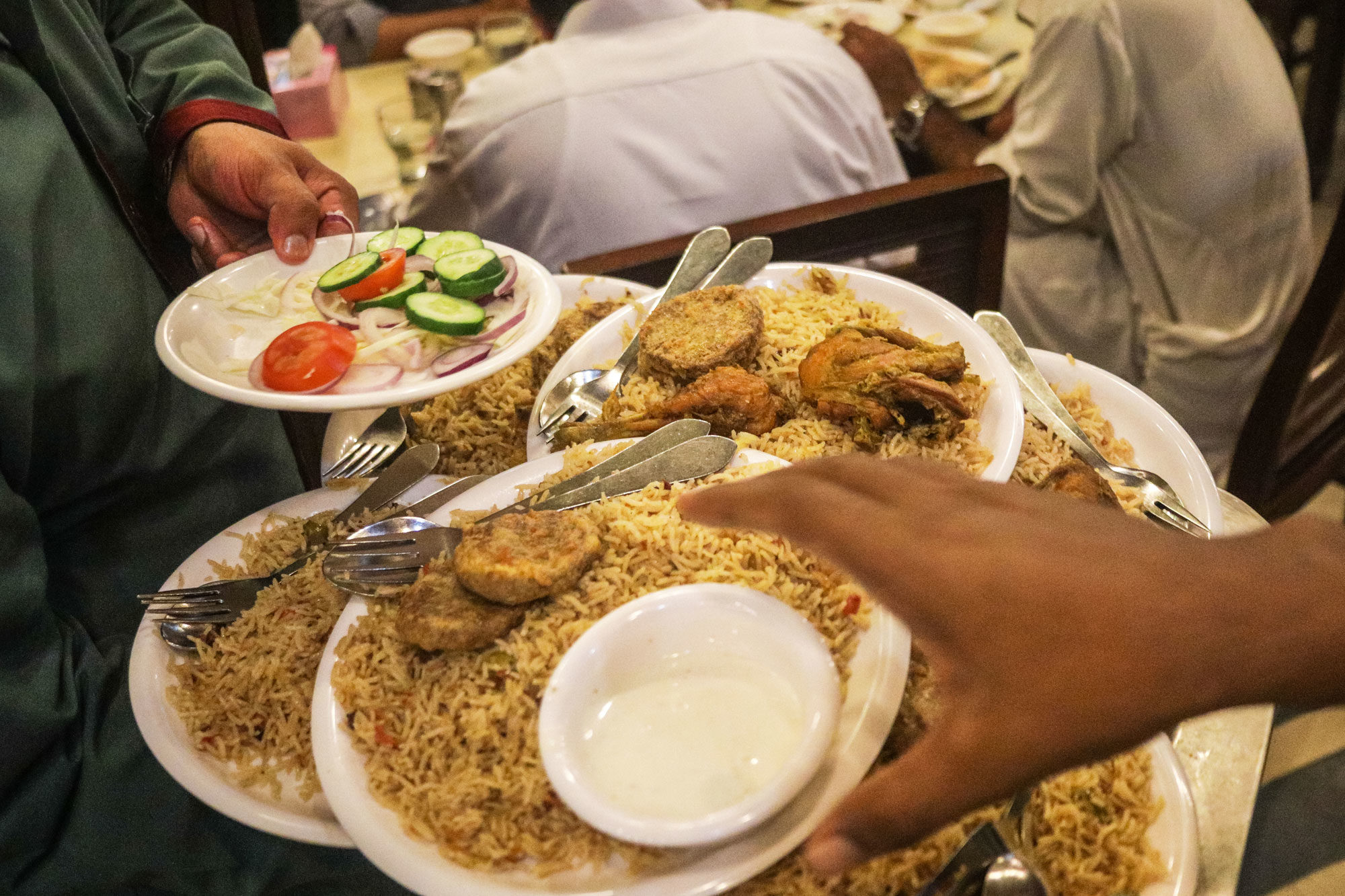 In Pakistan, there are mixed rice-factions and fracases.

When it comes to the topic of pulao and biryani in Pakistan, passion runs deep. Every few years, a debate erupts and swords are drawn, from household to household and feed to feed. Is pulao—the softly flavored, highly aromatic rice simmered in broth—superior to biryani, its more colorful and wildly spiced offshoot?

Both dishes can, very roughly, be understood as mixed rice dishes that came to the subcontinent under Persian influence. But that is where the similarities end. Pulao—a light dish that draws its flavor and nutty color from a gently spiced meat broth—is often paired with korma, a rich meat or vegetable curry with a thick sauce. Biryani, on the other hand, is loud and demands center stage on the table with its saffron-hued rice, often dressed up with heaps of finely cut cilantro and green chiles. It draws upon a complex medley of spices and requires you to layer the rice with your choice of protein before slow-cooking it.

Biryani enjoys cult status on the subcontinent, and it has come to define Indian and Pakistani cuisine globally. This irks those who, like me, grew up eating its quieter predecessor, the underrepresented pulao.

Culture writer Ahmer Naqvi, who grew up eating biryani, explains that this paradigm has to do with the dish’s hold on Karachi, Pakistan’s financial and culinary capital of over 15 million people in Sindh province. There is a large mohajir (“migrant”) population in Karachi that moved from cities and states that were strongly influenced by Mughlai cuisine, where biryani was common during the Partition between India and Pakistan in 1947. As a result, you find biryani in people’s homes more often there than in other parts of Pakistan—and, as Naqvi tells me, “Due to the city’s disproportionate influence on [Pakistani] culture, it gets inducted into the national consciousness even when it may or may not be true.” Kitchen staff layering the chicken korma on top of the rice to prepare biryani in Islamabad (left). Packing biryani for take-out.

Biryani also dominates Karachi commercially. As proof, Naqvi points to a Google Doc listing 62 of the best Karachi biryani spots, which he recently crowdsourced on Twitter. He is now visiting each restaurant with a friend and sharing his pick—“Critic’s Choice”—on the public page. “It was only after I left Karachi, I realized that biryani was consumed a lot less often,” he says, recalling the time he moved to Islamabad, the capital—some 900 miles north of Karachi—for work in 2012. There, he was shocked when he encountered the three-story, wildly successful mega restaurant Savour Foods, dedicated to serving only one item: pulao.

Seven years later, upon further reflection, Naqvi realizes that Savour Foods’ success shouldn’t have come as a surprise: “In truth, Pakistan is pulao country and very resolutely so,” he explains. “If you actually look at the taste preferences and historical linkages, all regions of Pakistan have their version of the pulao. They don’t have their version of the biryani.” Naqvi will go as far as supporting the suggestion that pulao may have originated in South Asia because of references to a dish made with meat and rice in ancient Sanskrit works—marking its status as a truly indigenous dish.

The assertion that pulao originated in South Asia is controversial. There is broader consensus that pulao was originally a simple dish of nomads and soldiers, which historian Lizzie Collingham, in her book Curry: A Tale of Cooks and Conquerors, says evolved in Persia into the delicacy that multiple countries know by more than 18 names today. Later, it led to the creation of biryani during the reign of the third Mughal emperor, Akbar (1555–1605). Akbar was the first of the Mughal emperors to feel truly at home in India, and he is credited with melding together Central Asian, Persian, and Hindustani culture. Collingham says the same process of synthesis went on in kitchens, where Persian pilaf met Hindustani spices to create biryani.

Given that pulao (sometimes called pilaf or polov, among several other names) spans multiple countries, what then constitutes South Asian pulao, and what makes it different from biryani today? Saliha Mahmood Ahmed, 2017 UK Master Chef winner and author of Khazana, who grew up eating pulao in her Kashmiri–Pakistani household in the U.K., elaborates.

“It’s not something that blows your mouth out, that’s not the point of pulao,” Ahmed says. “Pulao is meant to be an aromatic and light dish that you can use to mop up curry. It’s an adjunct, not a single dish on its own.” Ahmed says that, in good pulao, the rice has to separate and be fluffy, the onions browned to a perfect color. “Too pale, it’s flavorless…too dark, too sticky,” she cautions. Left: A server carrying a tray of Sindhi biryani at Sarang Sindhi Cuisine in Islamabad. Right: A tray of biryani ready to be served.

Given the ubiquity of the dish in Central Asia, the Middle East, and South Asia, Ahmed says that pulao has become native to each region based on the spices available. “You will start seeing subtle variations in the dish to the point that where you started and where you ended may be completely different.” But for both Ahmed and Naqvi, pulao is infused with a strong flavor of meat. “You have to extract the maximum flavor, and the bone is where the flavor lies,” Ahmed tells me. “Sometimes restaurants make pulao out of boneless lamb, but if you were a traditional Kashmiri person, you would complain that there’s no flavor.”

There are also strong opinions about the “right” way to prepare biryani, even though there are more than a hundred “right” ways to cook it. The traditional biryani described in Collingham’s book calls for the meat to be marinated in yogurt, fried, and then layered with partially cooked rice, but that’s just one take on Mughlai-style biryani. In her book Biryani, Pratibha Karan mentions that, despite emerging from North India, there are even more varieties of biryani in the South. Variations permutate between the type of rice, the preferred protein, the range of spices, the use of nuts, food coloring, and the level of sourness.

The dizzying variety of biryani points to exactly how democratic the dish is. “It is a dish that is begging for experimentation,” Ahmed says. Despite that, there is still a surprising snobbery around biryani, with some claiming that the only real biryani is from the Indian state of Hyderabad, or that real biryani must use saffron, or potatoes, and so on. A large pot of prepared biryani

Naqvi believes that such biryani elitism cannot take hold in Pakistan. “Since biryani was brought over by migrants to a new country that lacked fixed culinary traditions and institutions…people are freer to violate the rules.”

Coincidentally, the Pakistani fast food chain OPTP recently rolled out a “zing biryani” that appears to be traditionally prepared biryani topped with fried chicken nuggets and their signature fries. While it has raised a few eyebrows on Twitter, given biryani’s historically forgiving nature, who is anyone to say that’s not allowed?

Of course, what’s the fun in admitting that there is no wrong way to prepare biryani?  As Ahmed wisely points out, “That’s kind of the beauty of it…. If you are going to have a fight, why not have it over biryani?” As I sit back with my quiet, congenial bowl of pulao, I cannot help but agree.