Get a free recipe
Subscribe
When White Sugar Won’t Do
By: Cathy Erway Photos: Aaron Bernstein

There isn’t a one-size-fits-all sugar. And that’s okay.

When I wrote a Taiwanese cookbook in 2015, I introduced many to the joys of dried baby shrimp, fermented black soybeans, and black vinegar. But I intentionally left out one ingredient from recipes due to its relative inaccessibility in the United States. It was rock sugar, a common sweetening agent in Taiwanese and Chinese kitchens, often melted into teas, tossed into braises, and injecting a touch of sweetness to stir-fries. Instead, I suggested that you could just as well sub in brown or white sugar, in recipes like red-braised pig’s knuckle or three cup chicken. I now regret it.

Sugar, as we all know it in its many forms, is universally bad for you: it rots your teeth, gives you diabetes, takes you up and then crashes you down. And the history of sugar is a painful one—its production fueled colonialism around the equator, where sugarcane flourishes, and acted as a catalyst for the transatlantic slave trade. Yet refined, granulated white sugar, which is made from sugarcane or the sugar beet, cannot be ignored in the culinary universe. It’s the bedrock for fluffy cakes, gooey cookies, jams, and jellies.

But neither can we ignore traditional white sugar alternatives around the world, from clear crystals of rock sugar to hard blocks of jaggery, panela, kokuto, and other forms of cane or palm sugars less common in American recipes. Put simply, “sugar” is far from the one-dimensional box of Domino tucked away in your pantry—especially when you leave the Western world. Acknowledging the existence of the many types of sweetener and their differences from white sugar can bring not only nuance to dishes but a deeper understanding of culture writ large.

“I grew up with rock sugar in Shanghai,” says Zoey Gong, traditional Chinese medicine chef-herbalist and founder of Five Seasons TCM. “It gives foods a glossy look—it does a way better job than white sugar.” Gong recalls her grandmother tossing in a few pieces of rock sugar in a wok along with oil and soy sauce to start off her red-braised pork belly, and getting one piece as a treat. Rock sugar is also recognized in traditional Chinese medicine, where it is thought to aid digestion, soothe the stomach, and moisten the lungs, Gong explains.

Put simply, “sugar” is far from the one-dimensional box of Domino tucked away in your pantry—especially when you leave the Western world.

Joanne Chang, chef-owner of Flour bakeries and Myers + Chang in Boston, uses it in the latter restaurant’s soy sauce–glazed salmon and pork belly buns. “It adds a lovely caramelized rosy color, and it’s sweet without being overly sweet,” she says. While refined white sugar could easily overpower a dish, rock sugar makes for a mellower touch of sweetness.

Rock sugar is the product of further processing refined sugar—Gong likens it to ghee versus butter—creating a sort of blank-canvas candy that is sometimes sold at candy shops in a rainbow of colors and flavors. The practice goes back to at least the 16th century, when it was included in the Ben Cao Gang Mu, a classic text of traditional Chinese medicine. The sparkling rocks are prized for their purity, but on the opposite end of the sugar-processing spectrum are many less-refined sugar products that have unique benefits of their own.

To make sugar from sugarcane, a tall, bamboo-like reed is crushed, and the resulting cane juice is boiled down to a thick, dark syrup. From there, the sugar is crystallized and spun through centrifuges to remove moisture; the brownish crystals (at this stage, turbinado sugar) can be further purified into white granulated sugar. But if you skip all that and pour the boiled cane syrup into molds, you get a dense block of dark, caramel-flavored raw sugar that’s been the de facto sweetener in many cultures. These non-centrifugal cane sugars, as they are termed, vary in taste, texture, and color, and they are known by names including muscovado, jaggery, and gur in India; panela and piloncillo in Central and Latin America; rapadura and chancaca in parts of South America; and more. These have traditionally been more accessible alternatives to granulated sugar. 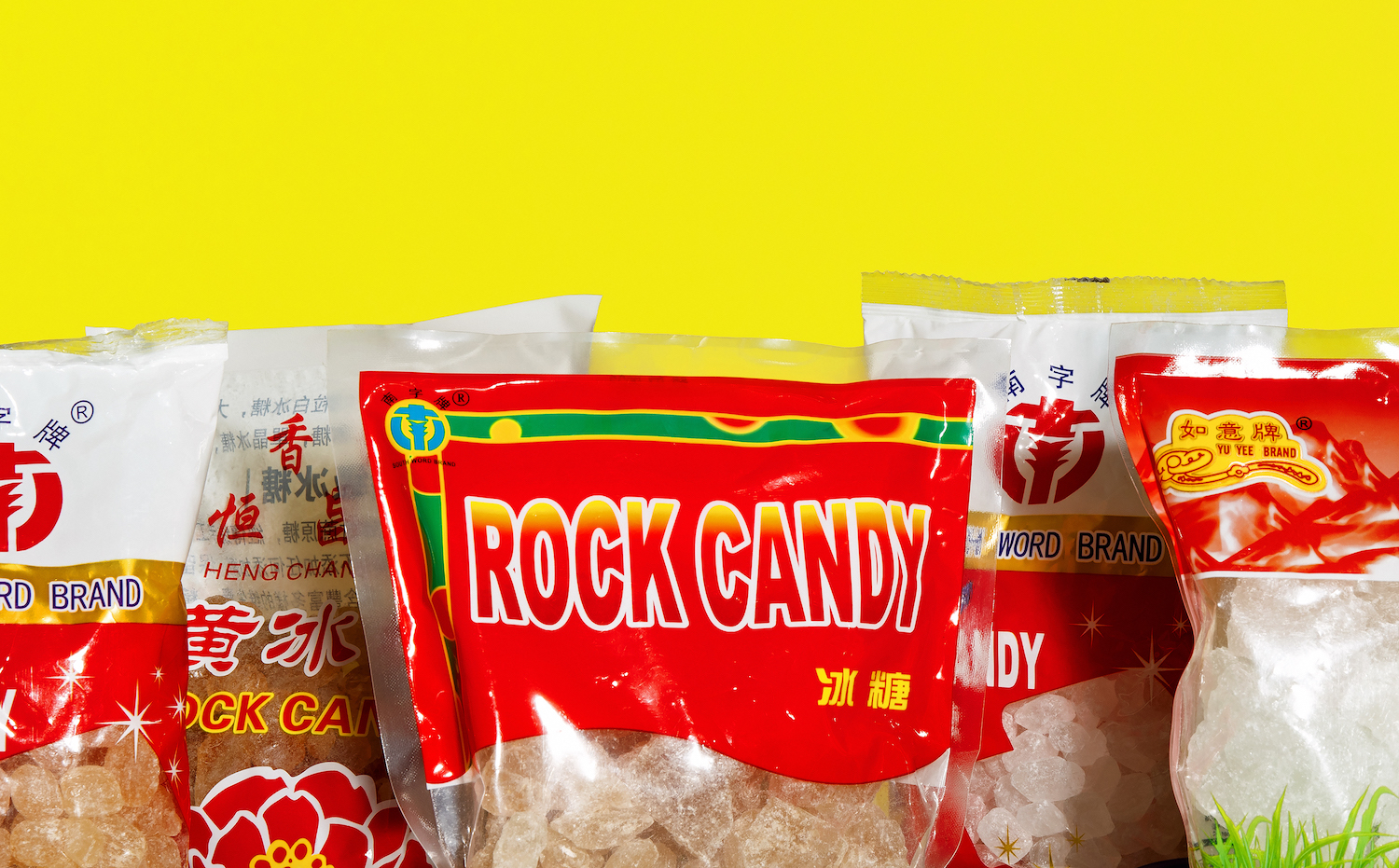 “Only high-class or wealthy people would have had access to white, crystallized sugar,” says Pilar Hernandez, food blogger and coauthor of The Chilean Kitchen, of Chilean society before the modern industrial era. She explains that a lot of older, classic recipes from Chile incorporated chancaca, a non-centrifugal cane sugar typically the color of dark chocolate, sold in hard blocks.

They were often melted down with some water, a bit of orange peel and cinnamon stick, and the resulting sugar sauce was the default touch of sweetness for desserts, beverages like mote con huesillos, or pastries like sopaipillas—not by sprinkling dry crystals of sugar on top. Only it lends dishes more than just sweetness.

“You cannot make the same pastries with white sugar—it doesn’t compare. A caramel made with chancaca is more complex, it has more going on,” says Hernandez.

“Even with the introduction of white sugar, chancaca is still something that Chileans enjoy, and it’s very much part of the culture,” says Hernandez.

Leela Punyaratabandhu, cookbook author, most recently, of Flavors of the Southeast Asian Grill, also reaches for panela or piloncillo when she can’t find the raw cane or palm sugars commonly used in Southeast Asian cuisine. Made from the sap of palm trees, including the coconut palm tree (nam tan puek), or sugarcane (nam tan oi), they are indispensable in a number of traditional dishes, like khanom tom, a type of sticky rice dumplings, or plat hu tom khem, mackerel braised with unrefined cane sugar and fish sauce.

“Unrefined coconut or cane sugar has a unique scent that’s just not replaceable,” says Punyaratabandhu. “When you use pure coconut sugar or cane sugar, the moment you bite into one of these dumplings, the fragrance hits your nose instantly, and when you grew up associating that scent with these dumplings, nothing else will do.”

“These ingredients together just create a pluralism of flavor—if you sub in white sugar, it will taste different.”

Palm sugars, including coconut sugar, are widely used around Southeast Asia and come in many varieties, depending on the types of palm tree sap used and their processing. They are often sold in mooncake-size rounds and feature a crumbly and moist texture, making it easy to break off just the right amount. And these palm sugars may carry unique health benefits in addition to their intensity of flavor. Their higher molasses content means that they hold more nutrients, such as calcium, iron, magnesium, potassium, and antioxidants. Coconut sugar also contains inulin, which gives it a lower glycemic index and can contribute to a healthier microbiome, says Linda Shiue, MD and author of Spicebox Kitchen.

In Indonesia, coconut sugar (gula jawa) is associated with helping heal various ailments, from coughing to bed-wetting, says Lara Lee, author of Coconut & Sambal: Recipes From My Indonesian Kitchen. And gula aren, which is made from the Arenga pinnata palm tree sap, is associated with improving skin, the digestive system, and canker sores. Both these sugars are integral to many Indonesian dishes, sometimes interchangeably, as well as to the Indonesian sweet soy sauce kecap manis. In her cookbook, some of Lee’s recipes call for coconut or palm sugar, but with a backup of brown sugar as a substitute.

“I wouldn’t want to discourage someone from trying Indonesian food because they can’t source palm sugar,” says Lee.

It’s true, sourcing can be a headache for even the most astute cookbook writer, as language and terms on labels can get confused, and options are limited depending on your proximity to an international grocery store. After all, says Lee, people in Indonesia usually buy whichever version of gula is most readily available to them. And white sugar is increasingly used in everyday cooking there due to its increasing accessibility.

Punyaratabandhu feels it’s gotten harder and harder to find a pure palm or cane sugar in the United States, and to further the frustration, she says, many US-based brands of coconut palm sugar are a far cry from the taste and texture of the real thing. But there is hope, as direct-to-consumer food companies are flourishing, and sugar, like chile crisp, is a category that could be on the move.

Online retailers specializing in international imports like Weee! and Snuk Foods offer a glimpse at a world of sugars where white crystals are not the first result. Through Yun Hai, an e-commerce importer of Taiwanese pantry staples, its cofounder Lisa Cheng Smith soon hopes to sell everyday Taiwanese sweeteners like rock sugar and maltose syrup, as well as Taiwanese black sugar, a raw, unrefined cane sugar similar to Okinawan black sugar, or kokuto.

“For me, making these available for home cooks to experiment with is really important. These ingredients together just create a pluralism of flavor—if you sub in white sugar, it will taste different,” says Cheng Smith.

Darker, earthier, more robust-tasting sugar alternatives come in some popular forms domestically as well: blue agave nectar, maple syrup, and honey may be the local analogues for many unrefined sugars traditionally enjoyed around the world. Each of them has a distinct flavor and several health benefits, and each can be substituted for white sugar much more easily than recipes may let on. Whereas refined white sugar’s raison d’être may be to impart sweetness and nothing else—no moisture, color, or complex flavors—there’s a world of sweetening agents that have originated beloved dishes with irreplaceable flavors. And sometimes, that “nothing else” won’t do.