Get a free recipe
Subscribe
A Girl Finds Her Knife
By: Amy Thielen Illustrations: Sophia Foster-Dimino

You may know Amy Thielen from her 2013 book, The New Midwestern Table, her television show, Heartland Table, or her column for Saveur on the same topic. Thielen has been our era’s best advocate and expert on the topic of Midwestern food, singing the gospel of roasted venison and braised sauerkraut in an era of grain bowls and coconut oil.

In a new memoir, Give a Girl a Knife (Clarkson Potter), the Minnesotan writes about a different phase of her life—the time she was a young woman working in the kitchens of some of New York’s most highly regarded restaurants. Life in the kitchen was fast, competitive, rough around the edges, and inexplicably addictive. As Thielen writes in her introduction, “To me, time in the kitchen was like a loophole, a bubble, a cure. Once I found it, I crawled inside and told myself I never wanted to leave.”

In this excerpt from the book, we get a look into Thielen’s stint as a 24-year-old in the kitchen of David Bouley’s high-wattage Manhattan restaurant, Danube, and her search for a knife that would prove her worth to the male chefs around her. —Anna Hezel

As the fifth week of my internship slid into its final one, Mario teased me as he watched me herky-jerkily dice some potatoes with my heavy German culinary-school-issued knife. “Ahmy,” he said, gesturing with the blade of his sharp Japanese slicer. “When you going to get a real knife?” The entire kitchen staff was obsessed with a Japanese knife shop within walking distance of the restaurant called Korin. Cooks on their day off regularly stopped by to show off their new knife candy, injecting a spot of cheer to our long days.

Mario had given me no hope that my tenure there would be anything but temporary. But for some reason I found myself boldly saying, “I’ll get a new knife when you start giving me a paycheck.”

It was true. I couldn’t afford one.

He looked at me through eyes slitted for seeing a distance.

“Okay. You start for real on canapé on Monday. By yourself.”

I knew the honeymoon was over. My marriage to the fine-dining brigade—which at times felt more like admission to an unfriendly harem—was about to begin.

I went to Korin and bought a very good Japanese carbon knife, soft and easy to sharpen on a water stone. It’s still the one I use most often, its brand forgotten, its dark charcoal blade swirled with a hot wind of orange rust.

The guys set about teaching me how to take care of it. Nick ran his knife frantically on the sharpening stone, like an adolescent taking matters of need into his own hands. Kazu did it slower, and taught me to sharpen the first side more than the second and to feel the roll of the burr on the underside before gently whisking it off against the stone. All of them gauged sharpness by reverently slicing against the grain of their arm hairs.

Not every cook in the kitchen was so neurotic about keeping their edges razor-sharp. Yugi, the young fish cook (nicknamed Eugene by the Americans), smiled and shrugged with Japanese modesty, saying, “My knife is sharp enough.” The Austrians were of the same mind. The other Austrian sous chef named Thomas, whom we called T2, used a heavy German cook’s knife, never sharpened it, and could cut a butternut squash into precise matchsticks in about three minutes, his knife powered not by a razor edge but by intention and sheer confidence. T1 constantly ran his long Japanese slicer against a honing steel, never on the stone, and could do the same.

I might have learned how to sharpen my knife, and how to cut a sheaf of chives into paper-thin rings, but I was still greener than a fern. And everyone knew it.

“J. Lo is in the bar! Her ass is on a barstool!” the guys hooted, and they could not believe that in the year 2000, at the height of her rise, I did not know who she was. Jennifer Lopez I might have faintly heard of, but not this bootylicious “J. Lo.” I had literally just spent much of the last three years in the woods, deprived of media.

In a lot of ways, my innocence saved me. If I had known exactly where I was or who I was knocking shoulders with, I would have been too freaked out to work, because this kitchen was stocked with the highest density of cooks who would go on to cook famously than any other kitchen I’d ever work in again. Gabriel would own three restaurants on Nantucket and appear regularly in food magazines. Harrison would helm a cultish small place in the East Village. Cesar would open Brooklyn’s first Michelin three-star restaurant. King would own a bunch of notable Filipino restaurants. Einat would open a couple of Israeli spots in the city and write a cookbook. Galen, next door at Bouley, would launch multiple restaurants of his own, and Bill, the Bouley pastry chef, would eventually become pastry chef at the White House. There was not a slouch in the bunch. It turned out to be a beautiful thing, that naïveté, because it gave me a blind courage. I’ve been dealing with the sad aftereffects of its erosion ever since.

I was twenty-four years old, ancient for a European cook, but average for Danube, an experienced kitchen. The head fish guy was in his midthirties and the meat guy was maybe pushing forty, and yet the three Austrians liked to point out how old we were. To their point, our knees were aging fast, scaling the steps between the upstairs serving kitchen and the downstairs prep kitchen at least fifty times a day.

In cook years, however, I was still a babe in the woods. After eventually moving up from canapés to garde-manger, even my salads were off, and Mario was not afraid to point it out.

“What are you doing, beating up my salad?” he scoffed, throwing the contents of my mixing bowl into the trash. He started with new greens, squirted them with vinaigrette, and tumbled them with his hands, as one might wash a delicate bra, and then lifted them in an airy heap onto the plate.

“Never break their ribs,” he said softly, guilting me as effectively as if I’d been breaking their bones.

We felt someone standing behind us and turned around.

“My dad is here!” Mario beamed, formally introducing us. “He is making us the goulash today.”

His father, who had come all the way from Mario’s hometown in rural Austria, smiled widely (for he didn’t speak much English), and motioned for the canister of hot paprika on the shelf above my head.

He took the paprika and sprinted away. Small and quick. That’s odd, I thought, he seems too young to be Mario’s father.

“Twenty-four,” Mario said, leaning over into my sink. He slurped up water with his hand, rubbed it all over his face, and casually wiped himself down with a brown C-fold towel as if mopping off from a shower. I thought for a second that he was going to dig out his ears with it.

“Yes,” he said, narrowing his eyes and smiling. “We are the same age.” He dropped the smile, tilted his head, and searched my face.

“Ahmy, you are so old.” Meaning so old to be working garde-manger, the cold appetizer station.

In any normal narrative, I might easily have spent nine months on that cold station. But as the fairy tale goes, someone quit. I remember that his name was Joel. He was a petite, quiet-spoken, sandy-haired guy, struggling on the line, sliding roughly around the station in an untucked uniform every night. Before that evening’s service Mario clapped his hands above his head and called us in for circle time. With theatrical formality he announced, “Everyone, Joel is leaving us. To become a food writer,” he said with a predatory smile. “His last day will be tomorrow. We wish him the best of luck in his future career.” This grandiose crew meeting was as effective as a snicker, as we never congregated to discuss someone’s leave-taking and certainly not for an early-out. In cases like Joel’s, the guy would usually just shove the contents of his locker into a white takeout bag after service and call the night his last. Joel, with a blanched face, nodded and blinked at the floor.

Reprinted from Give a Girl a Knife. Copyright © 2017 by Amy Thielen. Published by Clarkson Potter, an imprint of Penguin Random House, LLC. 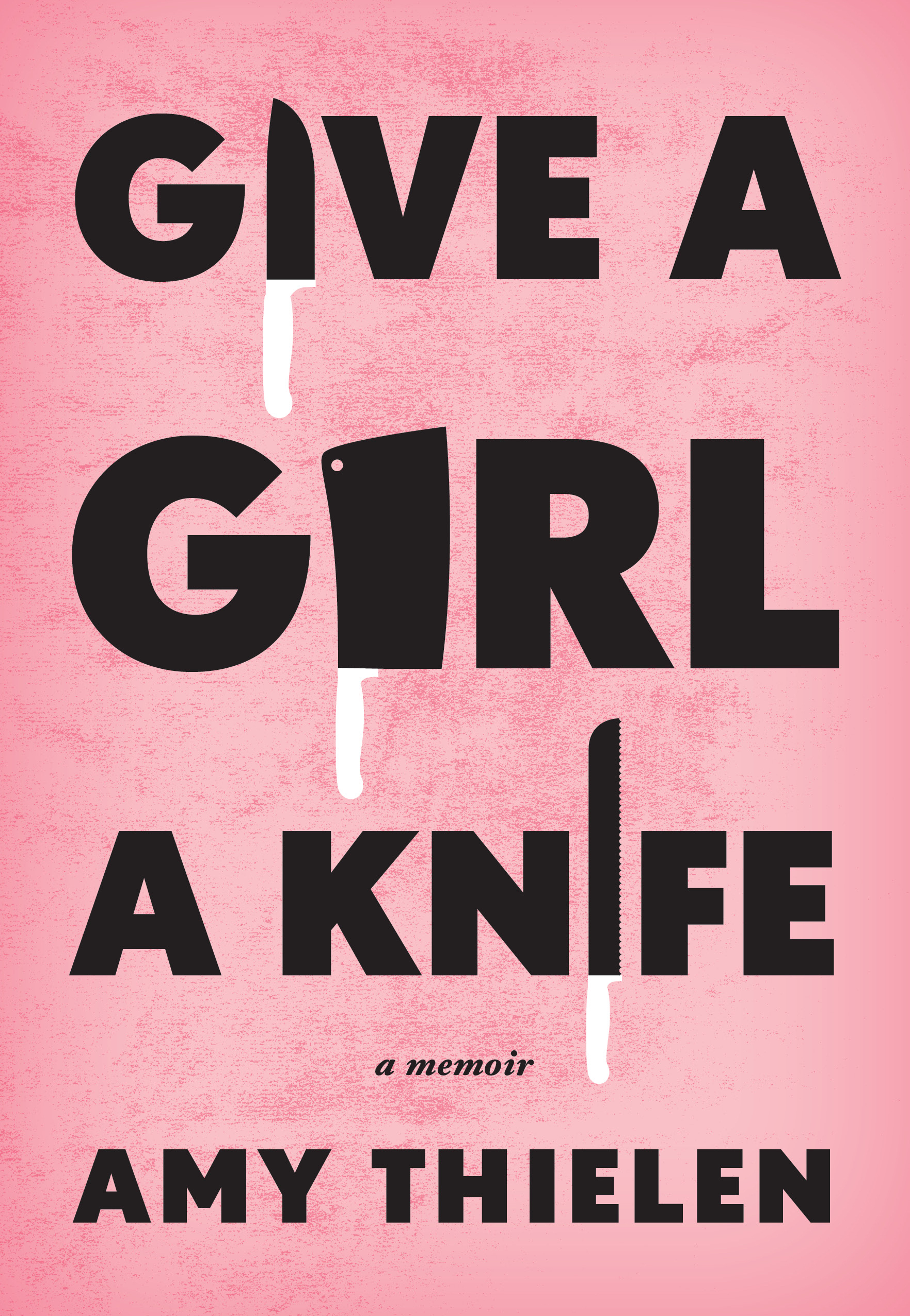 Amy Thielen grew up a few miles from the headwaters of the Mississippi River in rural Minnesota. She spent the early 2000s cooking professionally in New York under David Bouley, Daniel Boulud, Jean-Georges Vongerichten, and Shea Gallante. Since returning to Minnesota in 2008, she has written for the Minneapolis Star Tribune, Men's Journal, and Babble. She is a freelance recipe developer and teaches cooking classes in her home kitchen and at schools in the Twin Cities. She lives in Park Rapids, Minnesota, with her husband and their young son. (Photo credit: Jennifer May.)