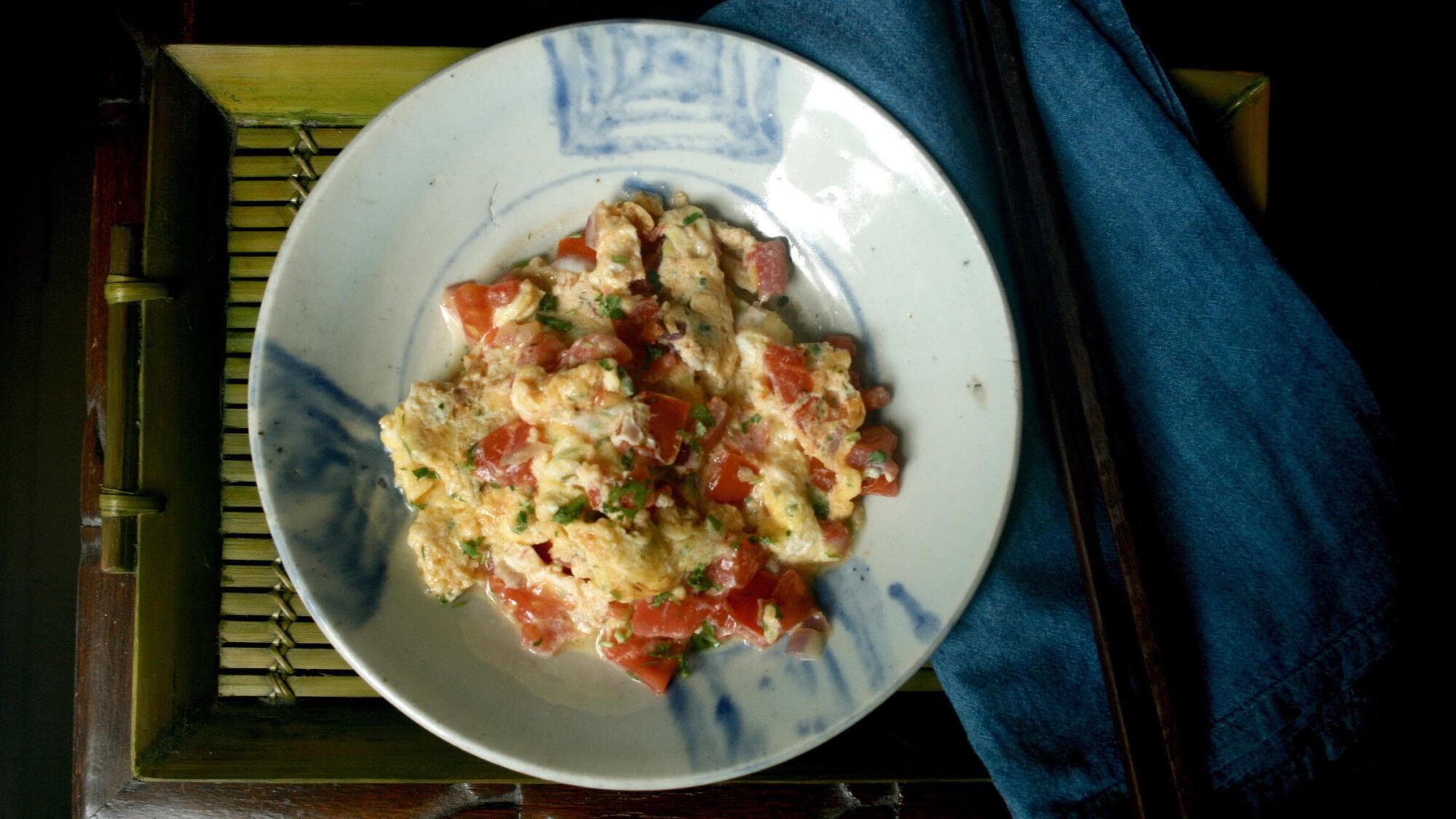 Stewed, stir-fried, or sloshed with soy sauce, can you name a more iconic duo?

Like a lot of other folks reading this, I went through my Tunisian shakshuka phase a couple years back, cooking countless beautiful skillets of chunky tomato sauce and eggs done sunny-side up.

I love those runny, sunny yolks—and so does Instagram—but I’ve since graduated to recipes where the eggs and tomatoes aren’t merely bedfellows but get stirred together into creamy, custardy, tangy-sweet results.

In any format, tomatoes and eggs are delicious, affordable, plentiful, and easy to cook. But there’s something about the slightly less camera-ready union of the two—scrambled, stir-fried, simmered like sauce—that is undeniably soothing, and arguably more enjoyable.

I dig the fast sloppy scramble of Colombian huevos pericos (with fresh green onions and tomatoes), and the soft curds of the Turkish menemen in the book Ripe Figs by Yasmin Khan, who uses peppers (dried and fresh), browned onions, oregano, and blanched, peeled tomatoes sweetened with a pinch of sugar.

I’m also making Lagos-based food writer Flo Chinyere’s Nigerian egg stew. It’s a heavy-on-the-tomato, thick scrambled egg sauce made with very hot chiles and fresh thyme, though I’ve seen some cooks add curry powder. It’s usually served with boiled yams or green plantains, but it’s not too shabby on toast either. In the Philippines, the similar sarsiado is piled on top of a whole fried fish, a recipe I learned from chef Miguel Trinidad a few years back when we were working on the book I Am a Filipino: And This Is How We Cook.

Maybe it goes without saying that everything above is the comfort food ne plus ultra for those who grew up eating them, inextricably linked with memories of home.

Like many Chinese Americans, Grace Young learned the tomato-egg alchemy as she was growing up. “My parents’ recipe shows off the purity of the stir-fried tomato-egg experience,” she told me. They usually made it around this time of year, says Young, when fresh tomatoes are at their best.

Their three-minute stir-fry—in her 2011 book Stir-Frying to the Sky’s Edge—is easy to remember. Beat four eggs with a little sesame oil, salt, pepper, and cilantro. Fry some garlic and shallots in a very hot wok; add two tomatoes, rice wine, and a pinch of sugar; then scramble in the eggs.

My current favorite wok-cooked version of tomatoes and eggs is called tukhum-bonjan, the Afghan dish taught to me by Nawida Saidhosin, an instructor at the League of Kitchens cooking school in New York City.

Saidhosin fries roughly chopped tomatoes in several inches of ghee in the bottom of her karahi—the flat-bottomed version of the wok used across the Indian subcontinent—until the tomatoes are soft and the fat is a deep golden orange.

She adds coarsely chopped jalapeños and garlic, then drops half a dozen or so eggs into the mix. With a spoon, she gently stirs the whites into a scramble with the tomatoes, but she lets the yolks stay whole, serving them when they are just barely set so that you can break them into chunks like a soft-boiled egg. Tukhum-bonjan is served with lots of fresh mint leaves on Afghan flatbread—ideally, you get both in every bite, says Saidhosin.

Tukhum-bonjan is always a taste of home for Saidhosin, who grew up in Kabul but left decades ago to find a more stable place to live. She’s been making it since she was 13, she says, after watching her mother do it nearly every day. “This is everywhere in Afghanistan,” she says. “Everybody knows tukhum-bonjan, and everybody likes tomatoes and eggs.”