Get a free recipe
Subscribe
The Unbeatable, Unmeltable Appeal of Halloumi
By: Yasmin Khan 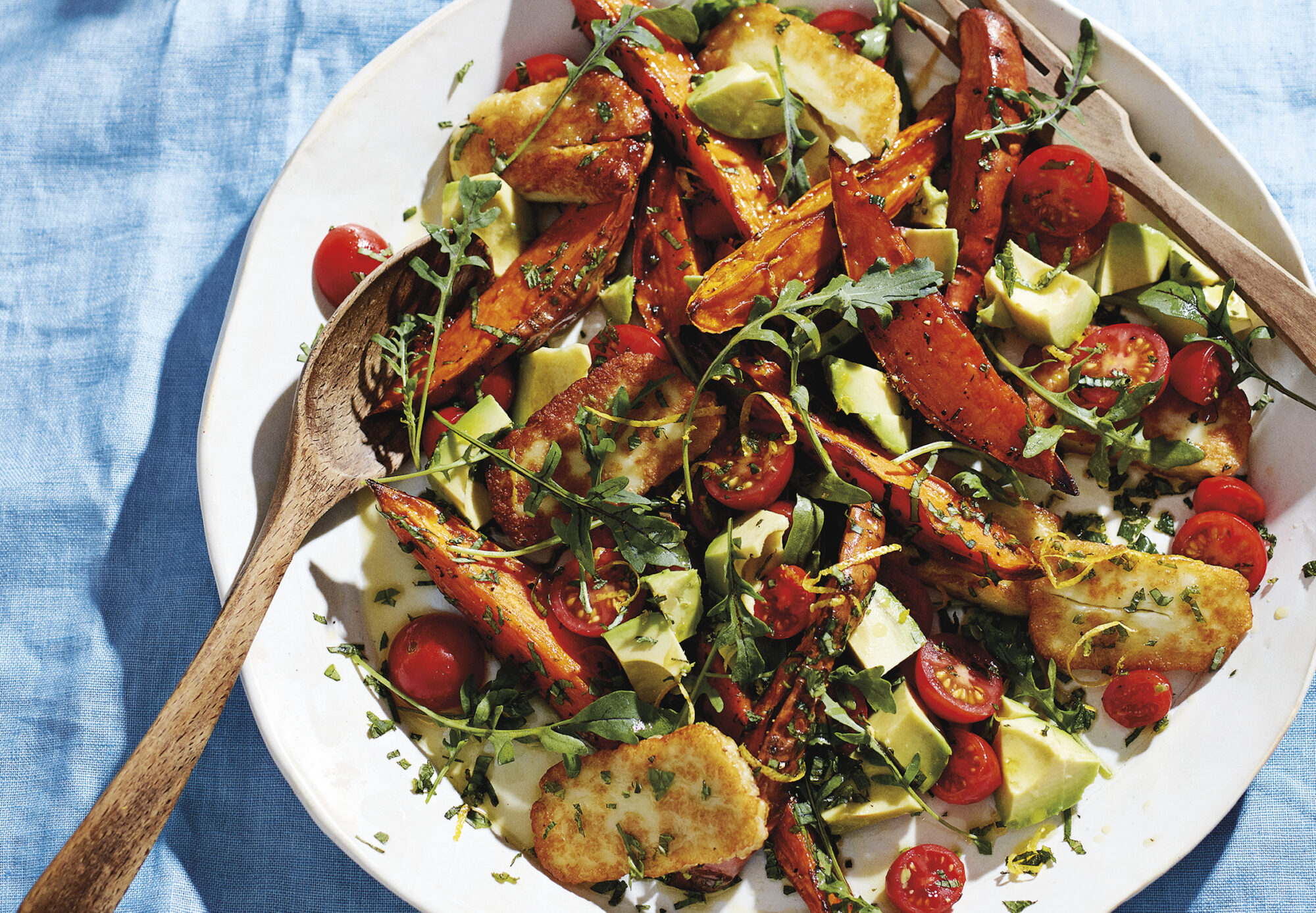 The dynamic cheese is a core ingredient in Cypriot cuisine, but its potential for frying, grilling, and baking knows no border.

When I was in Cyprus researching my latest cookbook, Ripe Figs, I fell in love with halloumi: the semihard, unripened, and brined cheese that is arguably the island’s most famous culinary export and—with all due respect to the fresh Wisconsin cheese curd—undoubtedly the world’s most popular squeaky cheese. Halloumi has been made in Cyprus for centuries, and traditionally, villages across the island would come together to make large batches cooperatively, with regional recipes varying from town to town. Today, this legacy can be observed in last names on the Greek side of the island like Hallumas, Halluma, and Hallumakis—a nod to the role certain families played in halloumi production.

Halloumi is a staple ingredient across the Eastern Mediterranean, used widely in Turkey, Syria, Lebanon, and Egypt, where it has been made for almost a millennium. But no country has embraced it like the Cypriots have. In Cyprus, halloumi is enjoyed in various formats for breakfast, lunch, and dinner. In Cyprus, the cheese is dipped in cornmeal, fried, and drizzled with honey to serve as an appetizer; shredded and mixed with dried mint and cinnamon, then stuffed into squares of ravioli; kneaded into plump batons of olive bread; and crumbled onto slices of ice-cold watermelon (the latter, in my mind, being the most refreshing snack you can have on a hot summer day). 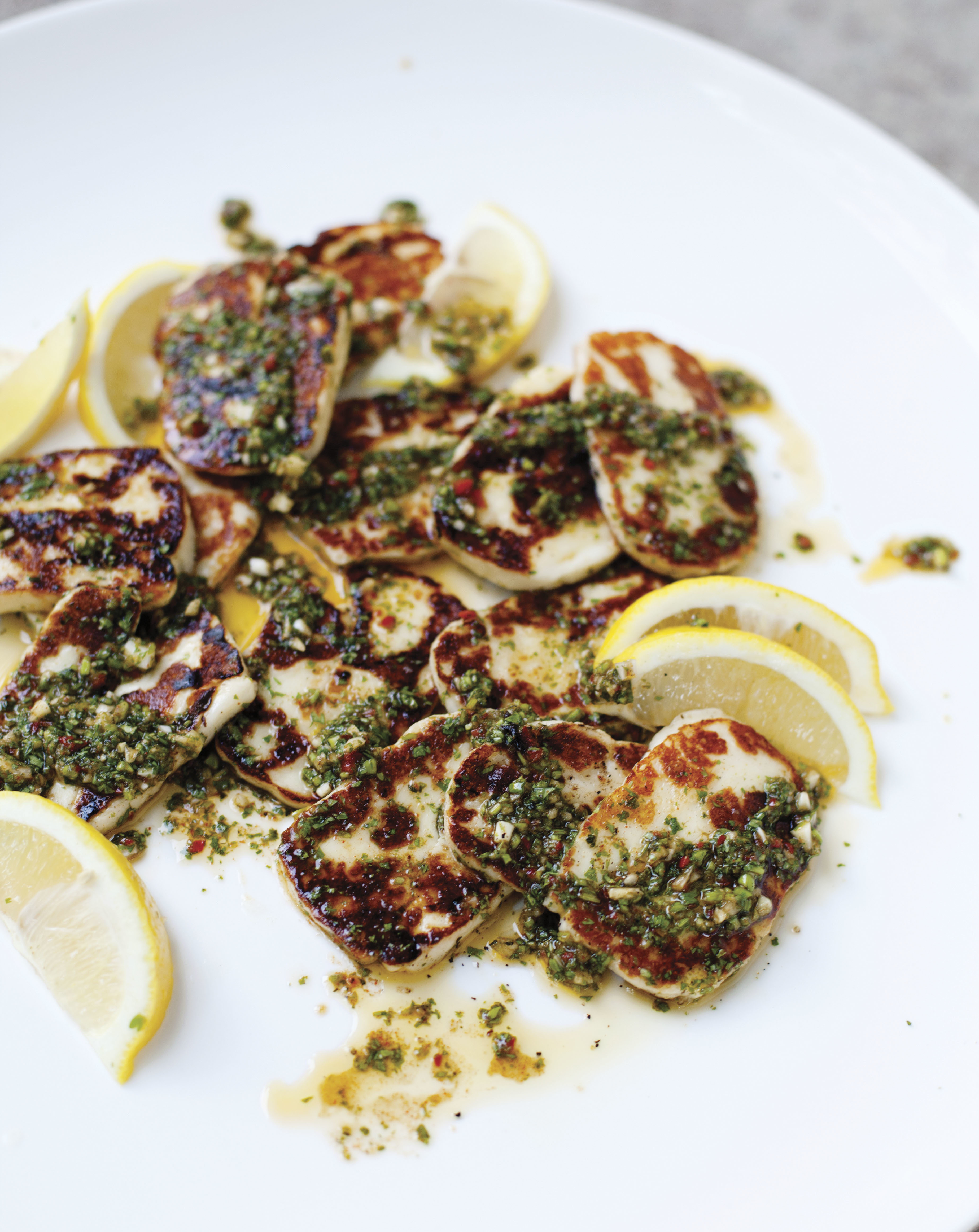 Due to its springy, chewy texture and a flavor that is mild (similar to queso fresco) but quite salty because of being brined, halloumi is a cheese that satisfies the senses on many levels. This is no doubt why it’s been adopted by the rest of the world in the form of halloumi salads, halloumi croutons, and halloumi burgers. Chef and author Yotam Ottolenghi has even tucked the cheese into baklava with cinnamon and walnuts for a final course. At a time when many are trying to reduce their meat consumption, halloumi’s firm texture makes it a great substitute for meat, especially when it’s seared and given a wisp of smoke on the grill.

The process of making halloumi involves heating the milk twice—first to separate the curds and whey, then to cook the curds in the whey, which solidifies them. This gives the cheese its unique texture and high melting point, which means it doesn’t lose its shape when heated, making it perfect for grilling or frying. While you can eat it raw, halloumi comes into its own when cooked—that’s when it gets its unique squeaky and stretchy quality.

At a time when many are trying to reduce their meat consumption, halloumi’s firm texture makes it a great substitute for meat, especially when it’s seared and given a wisp of smoke on the grill.

However you choose to prepare it, there are some important things to look for when buying halloumi. Traditionally, halloumi was made from sheep and goat milk, but today, cow milk is increasingly substituted or added, which gives the cheese a milder flavor. Check out the packaging, and look for cheeses with higher sheep and goat milk content for a stronger and more pungent flavor. This is also a cheese where you want to skip the low-fat varieties. What you lose in fat, you will lose in taste, and halloumi needs that extra fat to give it its stretchy texture.

Whichever type of halloumi you buy, the best way to enjoy it is to embrace its versatility. It can be used to fill a toasted sandwich (I like to fill a grilled ciabatta with halloumi, arugula, and a dollop of apricot jam), make skinny fries (move over, mozzarella sticks!), top a lasagna (try adding a layer of sliced halloumi on top of the béchamel), stuff into a spanakopita pie with wild greens, or grate into a bread dough. One of my favorite ways to eat halloumi is inspired by the savory muffins that greeted me when I arrived at my guesthouse in the Cypriot capital city of Nicosia on the very first day of my research trip for Ripe Figs. The combination of salty halloumi, cooling dried mint, and perfumed nigella seeds made for the perfect welcome to the island’s cuisine and confirmed in my mind that halloumi’s potential truly knows no bounds.

Yasmin Khan is a food and travel writer, broadcaster and author of the best-selling and critically acclaimed travel cookbooks The Saffron Tales (Bloomsbury 2016), Zaitoun (Norton 2019), and Ripe Figs (2021).