Get a free recipe
Subscribe
The Virtuous, and Virtual, Activism of Studio ATAO
By: Matt Rodbard Photos: Daniel Nguyen 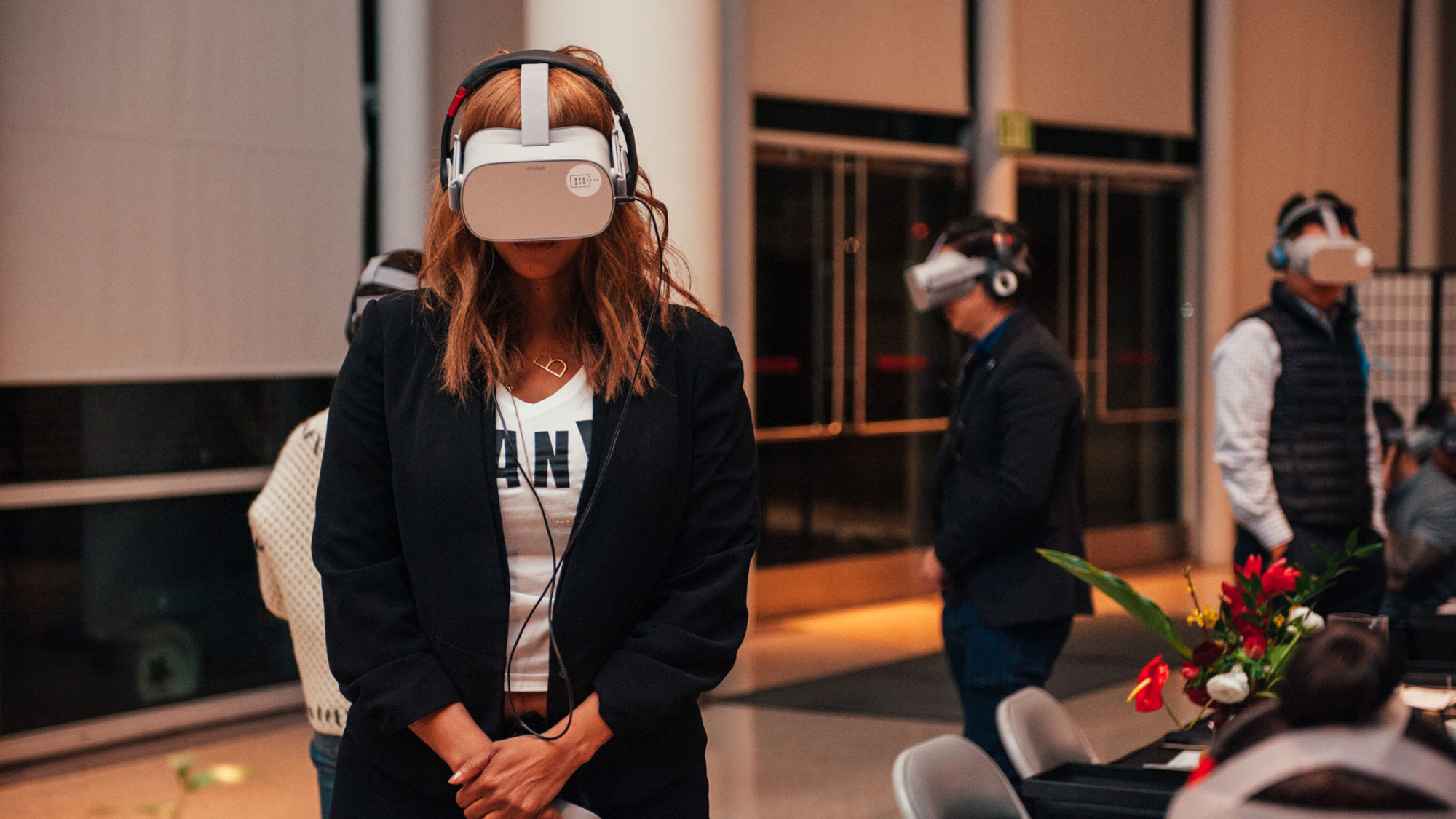 The culinary nonprofit, run by chef and poet Jenny Dorsey, taps AR/VR technology to tell the stories of modern food.

Jenny Dorsey is the cofounder of the educational culinary nonprofit Studio ATAO, but she’s also a chef, poet, TV food competition winner (she beat Bobby Flay in 2015), and cocreator of a now widely circulated and widely praised document that breaks down food media’s (that is, all media’s) problem with tokenization—defined broadly as the practice of making only a symbolic effort to give the appearance of equality within the pages of a publication, especially by recruiting a small number of people from underrepresented groups to serve as a mouthpiece.

The tool kit presents, with rich examples and methodical detail, the causes and results of tokenization, while defining the conscious and unconscious gatekeeping that holds BIPOC editors and writers from advancing within their careers. It’s a powerful guide, created as the result of an in-person salon of 11 writers, editors, producers, and a branding professional that Dorsey hosted in February.

“Our big goal is to create spaces where people can have honest, vulnerable conversations that ideally change their worldview,” says Dorsey over Zoom from Los Angeles, detailing the salon’s mission. For example, she might prompt a salon discussion of the media’s sometimes reductive coverage of border imprisonment, with participation from somebody who is undocumented and struggling with immigration.

Eater special correspondent Meghan McCarron attended the tokenization salon, held at Kiano Moju’s Jikoni studio in the Los Angeles Art District, sharing a meal of braised chickpeas with collards and raw, marinated kanpachi with fellow writers both familiar and new. “It was a mutual conversation tackling these hard issues,” McCarron recalls, adding that conversations about inclusion were usually held on formal stages in institutions run by white gatekeepers. Dorsey, who served as facilitator, created an environment that respected vulnerability but also tapped into uncomfortable topics—all with the goal of creating a document that aimed to fix the problems head-on. “It wasn’t just reliving trauma,” McCarron recalls. The restaurant industry is full of people with big ideas, but rarely do you see those ideas executed so thoroughly as in Dorsey’s work. Along with the salons, Studio ATAO hosts a frequent dinner series utilizing AR and VR technology, paired with poetry and spoken word. The six-course, multi-hour performance Asian in America was staged around the country in 2018 and 2019 at New York’s Museum of Food & Drink and Museum of Chinese in America and the Culinary Institute of America in Napa, California.

“It added another dimension to an already intimate and discussion-heavy dinner experience by literally enclosing you and all your senses within the experience,” says Cathy Erway, who attended a dinner in 2018 and wrote about it for Edible Brooklyn. “For Asian Americans, these discussions, quandaries, and uncomfortable experiences that she shared are not a choice; it can be an all-consuming internal debate.” Erway adds that it was nice to take off the AR/VR goggles and talk to the people at your table about what just happened, which was encouraged throughout the dinner.

“The creativity, the risk she takes, and her advocacy all add up into something unique,” McCarron says of Dorsey’s work. And it’s clear this is only the start for Studio ATAO’s big plans, which, as Dorsey tells me, include more salons and AR/VR performances, as well as advocating for a nonprofit model for restaurants.

You write that there is “untapped potential” in using a nonprofit model for restaurants and other food businesses. How does this model work?
Well, first, nonprofits have their own set of controversies and complications, but I think right now the nonprofit model is useful because it relieves a lot of the burden of making a certain amount of profit that restaurants aren’t making anyway, and to make that very marginal amount of profit means you have to decrease your costs in other ways. Eater ran a very detailed profile on the restaurant Mei Mei in Boston, about how they were basically not making any money. So what is the point of making such a small amount of money to then tell your investors that you did it?

I would feel better putting that money toward dictating higher pay for my staff. It’s not like my staff gets paid outrageous sums of money, but everyone starts at between $20 and $25 an hour, which is above what normal people make. Most restaurant people and people in the food business want to make the world a better place. And the nonprofit model is at least a move in that direction within the confinements of what we have now.

In general, without an investor, as a nonprofit, you’re operating a business with a cash-flow-positive balance sheet, but you’re not responsible for paying dividends or giving profit to your investors. Is that kind of the way it would work in the restaurant world?
Yeah, exactly. So, any profits that you do make, you don’t pay out. You just put it in your bank for later. As long as your costs are covered, there’s no real incentive to pay out, and instead you keep around a small runway. So if something comes up, you are covered.

Is there any kind of organized group that’s helping to shift to this model? Have you linked up with anybody?
I’ve talked to people who are also working for nonprofits, and then they’re like, yeah, that sounds like a great idea. But most of the food nonprofits I know are more related to food justice, which is great—we need them, too—but there are also a lot of people, I think, who are just so scarred by public charities and by how mismanaged they are. Nobody wants to support it because there’s a lot of problematic loopholes as well. But even if the nonprofit system is imperfect, why don’t we at least try it?

You’ve been hosting open salons where you bring together a smart and diverse group from the food world and beyond. What have been some of the themes for these?
We did one about tokenization, which is how the tool kit came about. That one was our in-person one, as it was before COVID. It’s very unfortunate, because we actually had a bunch lined up in different cities, and then everything happened. It was a family-style dinner, very casual. And then, after eating, we sat on these couches and just talked through tokenization. We had a facilitator guide us through the conversation using a particular facilitation method. It was set for about two hours. We went for about two and a half, and then people stayed for another three just to talk among themselves.

And then who does the writing for the actual document that you created?
The same people who participated. I think it’s important for the people who were in the room to write the document. We have a couple of volunteers who will help with research, but it’s written by the group. Moon cakes (right) are the focus of a final course called Fancy Because It’s French.

Switching gears to VR and AR. You said you had an epiphany about this during an acupuncture session. What was the epiphany?
I had this moment, like, “Oh my God, I should do something.” I’ve been so interested in [the format] and had done a previous AR/VR project for a hotel client, which was fine, and it was fun, but it was kind of pointless, if I’m being totally honest. And I was just ruminating on, like, what’s the point of this AR and VR technology so that it’s not, you know, gimmicky. There are so many gimmicky experiences out there. I had this epiphany at acupuncture that, you know what, it’s about the story. It’s storytelling. I honestly didn’t have it all together, but I knew that was the path to set it up.

So you were linking VR and AR with the dining experience. The diners are wearing a device. Like goggles? How does that work?
We’re most known for our series Asian in America, which talks about Asian-American identity. It’s about three hours long and six courses of food in total. Three courses are paired with the VR, and then three with poetry—so the diner is in and out of VR. When they put on the VR [headset], what they’re seeing is brushstroke by brushstroke. The creation of the dish that they’re about to eat. And they’re hearing audio narration from me explaining what the symbolism is behind the ingredients, the technique, and then the plating.

Each video is about two minutes long, and it does two important things. One is consistency of delivery. Diners are seeing something visually interesting, but it’s also very consistent. They hear the same thing every time, and everyone hears the same thing as it’s delivered. The second is that with the AR and VR, the engagement level at the table, and just the energy level across the entirety of the event, stays really high.

How are you tying together these courses with the Asian American experience in mind? The course I talk about the most is one called model minority, discussing the model minority myth. I draw a lot of parallels between the food itself and the concept. The main protein in that dish is veal sweetbreads. For those in food, you know, sweetbreads are this one-off cut of organ meat that we don’t consider really disgusting. Like, everything else is gross, but sweetbreads are fancy, and they’re gourmet and always served in the same way: fried. And so I kind of drew a comparison with that and Asian Americans, who were like, unlike all the other minorities, you guys are the “good minority” as long as you stay in your lane, you know, you shut up and you do as you’re told.

I talk about that symbolism and talk about a little bit of my own background of being used as a prop in that way by my teachers. The sweetbreads are also plated so that it looks like a maze when you look down on it, with the feeling like you’re always going through this maze of finding your identity. And then, at the very end, you get your sweetbread, and it’s covered by this rice sheet. There’s also some celtuce on that dish, which is a comment on the appropriation of celtuce. Celtuce is very popular in a lot of East Asian cuisine. And then Dan Barber said that he, like, discovered it a few years ago. That nobody had known about it. All of a sudden, it blows up. Nobody knew about it. You know, it’s just, yeah. I’m shaking my head.

This interview has been edited and condensed for clarity. Studio ATAO is hosting a community skillshare on July 8 featuring Ashtin Berry, an activist, educator, and founder of Unite America’s Table and community architect at Radical Xchange. The topic is civic engagement. Sign up for free here.