Get a free recipe
Subscribe
The Untethered, Unstoppable Power of the COVID Pop-Up
By: Emily Wilson Photos: Chelsie Craig 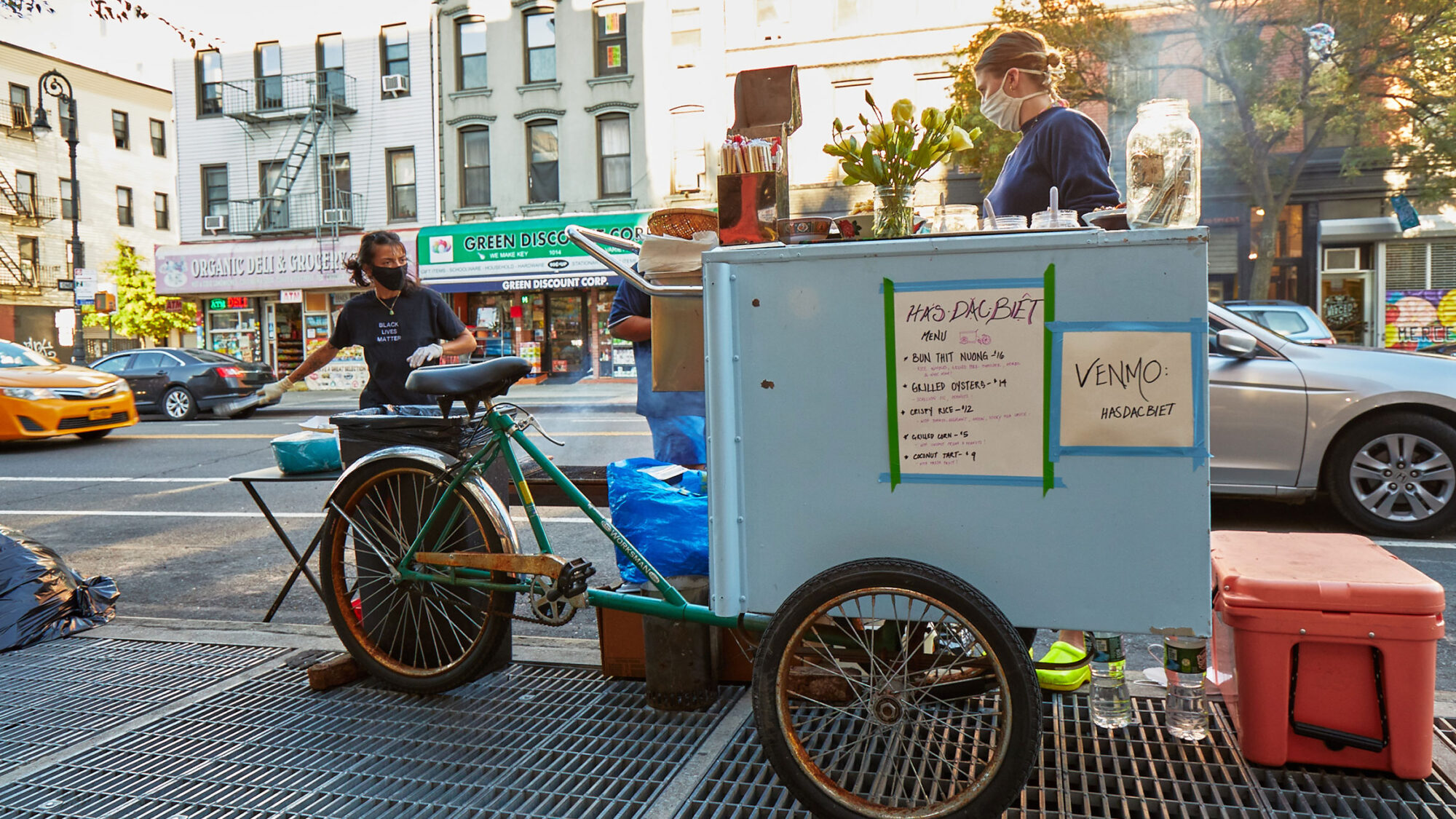 When the pandemic turned the restaurant industry inside out, the cooks behind Ha’s Đậc Biệt fired up the sidewalk grill.

Sadie Mae Burns and Anthony Ha had full-time jobs working in restaurant kitchens when they started a Vietnamese street food project on the side. It was the summer of 2018, and Ha had found a paleta cart attached to a bicycle for $1,200 on Craigslist, which he purchased using funds raised on Kickstarter. The cart’s doors were removed to fit a hotel pan inside—where they’d pack their quart containers of fish sauce and fried shallots—and a Japanese-style charcoal grill was installed.

After debuting at the Hester Street Fair that July under the moniker Mr. Fish Sauce and later rebranding to Ha’s Đậc Biệt, Burns and Ha began holding periodic pop-ups in Brooklyn, serving classic Vietnamese street food and other regional dishes such as bún thịt nướng (vermicelli noodles with grilled pork, herbs, peanuts, and nuoc mam), fish sauce–glazed shrimp skewers with lime leaf and cilantro, and bành patê sô (a flaky pastry filled with pâté). “We would squeeze a pop-up wherever we could just so that we could do something ourselves,” Ha explains of the bars and friends’ parties (including a zine launch event held in the basement of a Bushwick church) where Ha’s Đậc Biệt found a home, and an eager crowd. But it wasn’t until COVID put them out of work as restaurant cooks (Burns at Roman’s and Ha at Frenchette) in March that they capitalized on the temporary concept full time. For the classically trained cooks working in the New American and French vernacular, Ha’s Đậc Biệt was their own creative outlet and a platform that they were eager to build upon. Ha is a first-generation Vietnamese immigrant, and the couple has spent significant time traveling and eating around Vietnam, where they’ve been inspired by the street-side restaurants.

“When there are lines, and we’re grilling, and it’s smoking up everywhere . . . it feels reminiscent of street food in Vietnam,” Ha says. “We’re just trying to make things as fresh and lively as possible, and there’s a whimsy to it,” Burns adds. Over the past several months, they’ve been popping up as often as twice a week and partnering with pastry chef Natasha Pickowicz (formerly of Flora Bar) at her own pop-up, Never Ending Taste, and Patricia Howard and Ed Szymanski of Dame.

“When there are lines, and we’re grilling, and it’s smoking up everywhere . . . it feels reminiscent of street food in Vietnam.”

“Đậc Biệt” translates to “everything,” according to Ha. “It’s like a special combination or house special,” he says in a recent interview at a local café near where the couple lives in Bed-Stuy. The term is used throughout Vietnam, denoting a restaurant’s specialty with names like Bánh Mì Đậc Biệt or Phở Đậc Biệt. And it suits their freewheeling, ever-changing menu. “It encompasses the whole ethos of, ‘what’s special right now?’” Burns says.

Of the 15-plus pop-ups held since April, there’s only one dish that’s been a constant—the “crispy crunchy salad” made with rao ram, basil, market vegetables such as cherry tomatoes and peppers, fried shallots, and peanuts—but come winter, the duo expects bún chả cá (fish cake noodle soup from Da Nang), bò kho (a spiced beef stew served with bread), and homestyle takeaway boxes inspired by the food Ha grew up eating (comprised of pickles, rice, some sort of protein or vegetable, and a side of broth) to come into play. Trips to the Greenmarket help inform what makes it onto the menu at each pop-up, as do the spaces they’re invited into. At Cookie’s, a bar with ample outdoor space in Ridgewood, Queens, for example, they were able to use the bar’s flat top instead of their usual charcoal grill to make bánh xèo, crispy coconut rice crepes filled with pork belly and bean sprouts and served with plenty of herbs. (Every Thursday, they pick up a cornucopia of herbs from Ken Hing Food Market, a Vietnamese bodega in Manhattan’s Chinatown, including cilantro, Thai basil, ngò om, rao ram, mint, tiá tô, and shiso). Seafood was the star of their menu at Brooklyn’s Hunky Dory in August, a restaurant where regulars are accustomed to eating composed dishes, as opposed to bar snacks. At the beginning of quarantine, Ha thought he might return to work in restaurants once everything settled down, whereas Burns had a different plan. She started volunteering at a local food pantry and hoped to use her learnings to recenter their work with Ha’s Đậc Biệt. During the Black Lives Matter protests of late May and early June, Burns and Ha started cooking food to drop off at Abolition Park, near a cluster of municipal buildings in Downtown Brooklyn, and they also set up their cart outside the Brooklyn Museum to feed protesters for free at the Black Trans Lives Matter rally in mid-June.

“There’s a lawlessness to it that I think the restaurant industry really needed for many years.”

“That’s when we realized we could actually cook through this pandemic,” Ha recalls. Now, their business model is rooted in cooking for a cause: they pay themselves a day rate that’s similar to what they made while working in restaurants, and all remaining profits are donated to a charity of their choice. Since the couple has decided to work on Ha’s Đậc Biệt full time, making it financially sustainable is key.

They recently partnered with Lillian DeVane and Kelly Sullivan of FOH Podcast on an initiative called Pearl Diver, which uses profits from the pop-up to create warm meal donations for Urban Strategies, a nonprofit agency that serves a wide range of shelters across the city. As summer switches to fall and the pandemic surpasses six months, restaurants, and especially bars, are desperate to bring business while complying with new (and ever-changing) laws, an experience that has been frustrating for some but has also led to many invitations for Ha and Burns to enter new spaces. “There’s a lawlessness to it that I think the restaurant industry really needed for many years,” Burns says.

Ha and Burns see this moment as a chance to step back from some of the restaurant industry’s most pervasive problems—such as inaccessibility and heightened egos, to name a few—and shape a platform that’s modeled around community and sustainability. Similar pop-ups are subverting these restaurant traditions all over the country, from LA-based pastry chef Laura Hoang’s weekly “Mini House” bake sales to Hunnybee Bundles in San Francisco, a Filipino set meal and wine pairing delivery service from Brett Shaw (Liholiho Yacht Club) and Aimee Arcilla (Californios).

This new landscape has also empowered chefs that are earlier in their careers, like Ha and Burns, to branch out on their own ahead of schedule. With that comes a flush of innovation, in cuisine as well as concept. “The energy is just different with younger cooks. The pandemic exposed everything,” Ha says. Unlike many established restaurants, which are currently shouldering the burden of rent without customers in their dining rooms, pop-ups are untethered, both in terms of physical space and identity. “You can literally decide to do anything with it. It’s brimming with possibility,” says Burns. “It feels kind of limitless.”