Get a free recipe
Subscribe
The Tenacious Quest to Find the World’s Best Rice
By: Kenji Hall 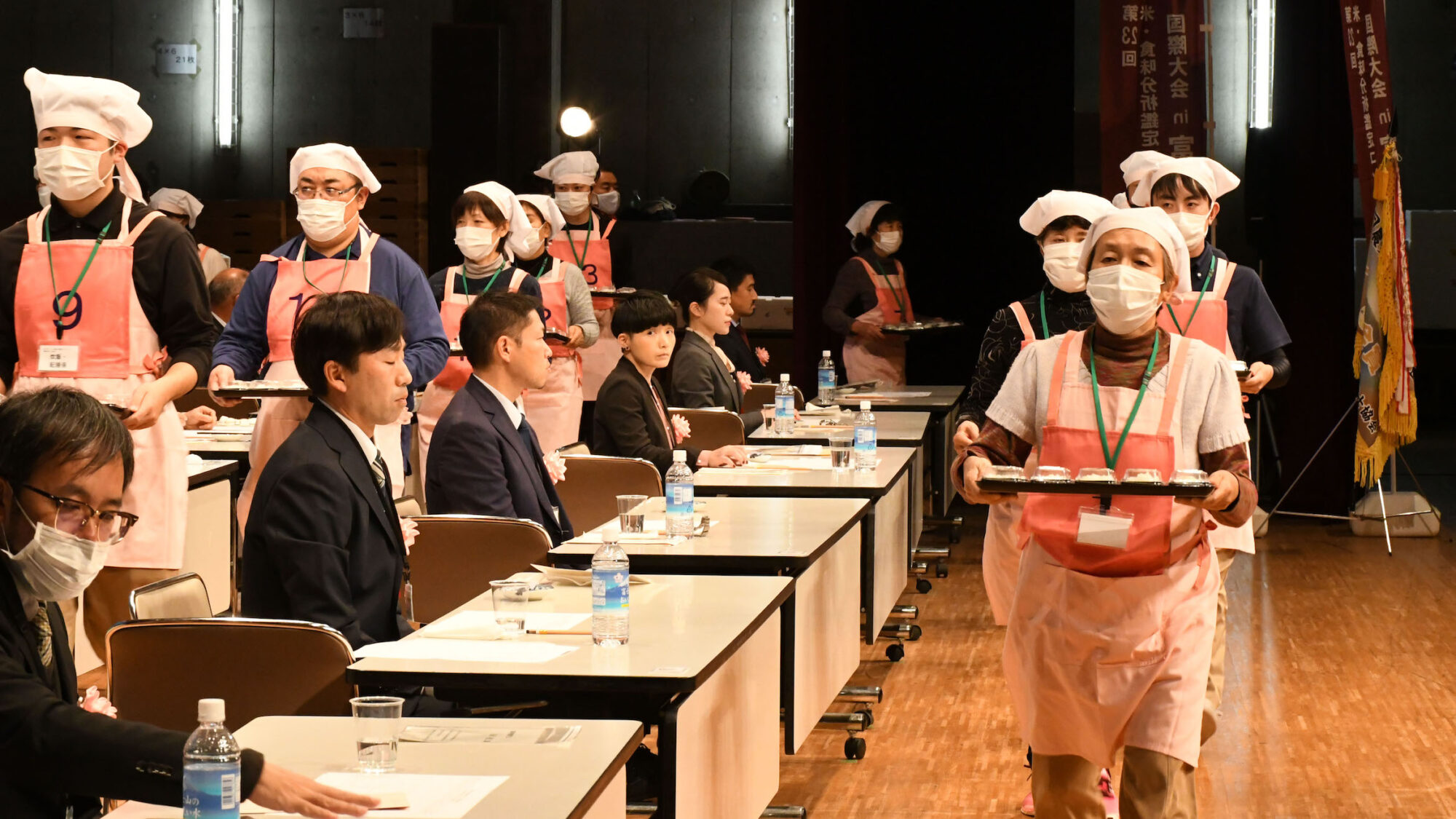 Among hundreds of Japanese brands and cultivars, it takes a blind tasting by a panel of “rice sommeliers” to determine the top of the crop.

The World’s Best Rice comes in a sturdy, gold-embossed box containing six slender packages. Sold for ¥10,800 for 840 grams (that’s $95 for less than 2 pounds), it’s nearly 30 times more expensive than what you’d pay at a supermarket in Japan. The Guinness World Records named it the priciest rice on the planet in 2016. Japan’s rice milling and processing giant Toyo Rice Corporation, which sells the product mainly to well-to-do customers in Japan, the United States, and Singapore, commands the princely sum by blending several of the top-placed finalists chosen by judges in a blind tasting of the International Contest on Rice Taste Evaluation, the country’s most prestigious rice competition, which takes place each November. The winning batches are stored in temperature-controlled rooms for at least six months before the kernels are milled to remove the tawny outer bran—but never the ultrathin umami layer around the starchy core. The price is justified, Toyo Rice officials say, because you simply won’t find better-tasting short-grain white rice anywhere.

This is all assuming you believe that rice has a distinct flavor, varying drastically from farm to farm, grain to grain. You might dismiss the World’s Best Rice as a marketing stunt; Toyo Rice only produces a few hundred boxes a year. But the concept that a person’s palate can be trusted to rate and rank batches of plain white rice, like single-origin coffee or grower Champagne, has a mainstream following in Japan. National newspapers, lifestyle magazines, food websites, radio shows, daytime TV programs—there’s no shortage of printed pages and broadcast airtime filled with in-depth commentary from “rice sommeliers” about what types are better for a light breakfast of fermented soybeans and seaweed or as fried rice for dinner. In addition, shopkeepers certified as “five-star rice meisters” demonstrate their expertise with their special in-house blends and taste charts.

Growing up in California, I enjoyed plenty of rice—Calrose brand, sold in 20-pound bags at a Japanese grocer in San Diego’s Convoy District. It was a mainstay of our family meals cooked by my mother, who immigrated from Japan after marrying my father in the mid 1960s. Rice went with just about everything—sukiyaki, gyoza, tempura—which is how I formed my opinion about it: that blandness was the secret to its versatility. But after moving to Japan two decades ago, I soon heard people praise the “sweetness” of rice. How rice felt as it slid down the back of the throat—its nodogoshi. This was news to me. Had I overlooked the obvious, or was something else going on? 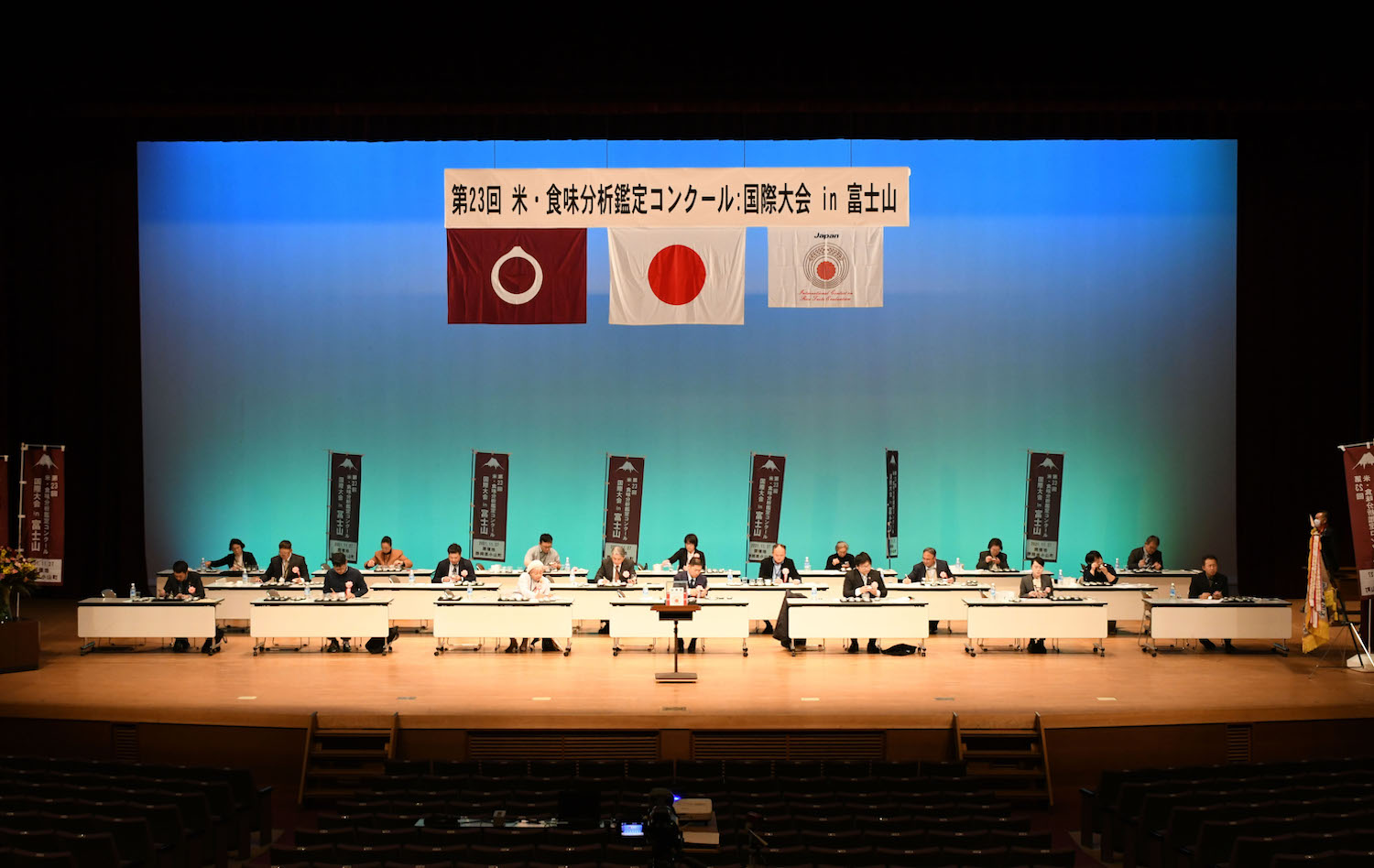 The International Contest on Rice Taste Evaluation—the national competition that determines what goes into the World’s Best Rice—was conceived to reward exceptional farmers.

For anyone eager to find out, there’s an abundance to sample available. Japan has around 300 brands of short-grain japonica rice that go by names like Yume Shizuku (Dream Droplet), Seiten no Hekireki (Bolt from the Blue), Tsuyahime (Shiny Princess), and Mirukii Kuiin (Milky Queen). Each one is a unique cultivar that’s been grown by plant breeders for some combination of traits: stickiness, starch density, big kernels, high yields, early maturation, heat resilience, pest resistance. Some thrive only in the warmer subtropical southwestern regions, while others are hardy enough for the cooler northern climate of Hokkaido.

Toyozo Nishijima, owner of rice shop Suzunobu, in western Tokyo, says small differences in traits might make one rice perfect for a spicy curry and another better for grilled fish. “Food lovers are starting to get adventurous, and rice is not just a staple for them,” he says. He points out a customer—a regular, he says—who buys a one-kilogram vacuum-packed bag of Yukiwakamaru, grown in Yamagata prefecture, and a two-kilogram bag of Sasanishiki, from Miyagi prefecture. “This year’s harvest came in a few weeks ago. If she buys five or ten kilograms, she won’t be able to finish it before it begins to lose its freshness. Instead, she gets a little of this and that, and in a week, she’ll be back to try something else,” he says.

My rice appreciation begins to accelerate during a visit to the Fukui Agricultural Experiment Station, a regional plant breeding research center in Fukui, a city in western Japan, about a four-hour train ride from Tokyo. Surrounded by rice fields and plum orchards, the laboratory holds daily blind tastings after the rice season harvest with staff of still-in-development rice cultivars. In a room with ivory walls and blinding fluorescent bulbs, Asako Kobayashi, the head of rice research, hands me chopsticks, a glass of water, a scorecard, and a plate. On the plate are five half-dollar-coin-size covered portions of steamed rice: four at compass points next to a colored dot and one in the center. Kobayashi tells me to give scores to each of the four on a scale of -3 to +3, comparing them to the middle one, in seven categories: whiteness (白さ), gloss (つや), aroma (香り), stickiness (粘り), firmness (硬さ), sweet-umami flavor (味) and an overall impression of whether it was good (総合). I uncover one rice clump, sniff, lift the plate to catch the light and eat, and then repeat.

Comparing rice to a single control pile draws out slight variations: discolored kernels, a faint hint of popcorn, a swollen firmness. This is how Kobayashi’s team identified Ichihomare, a cultivar launched in 2017 that’s earned enthusiastic reviews and a toehold in specialty shops around Tokyo. “If you participate in tastings every day, you become very sensitive to the nuances,” says Kobayashi, who has sampled thousands of rice varieties over more than two decades in the field. Even so, it seems odd to eat rice like this, on its own. I can’t help but wonder whether nuance would matter with sauce-smothered tonkatsu. 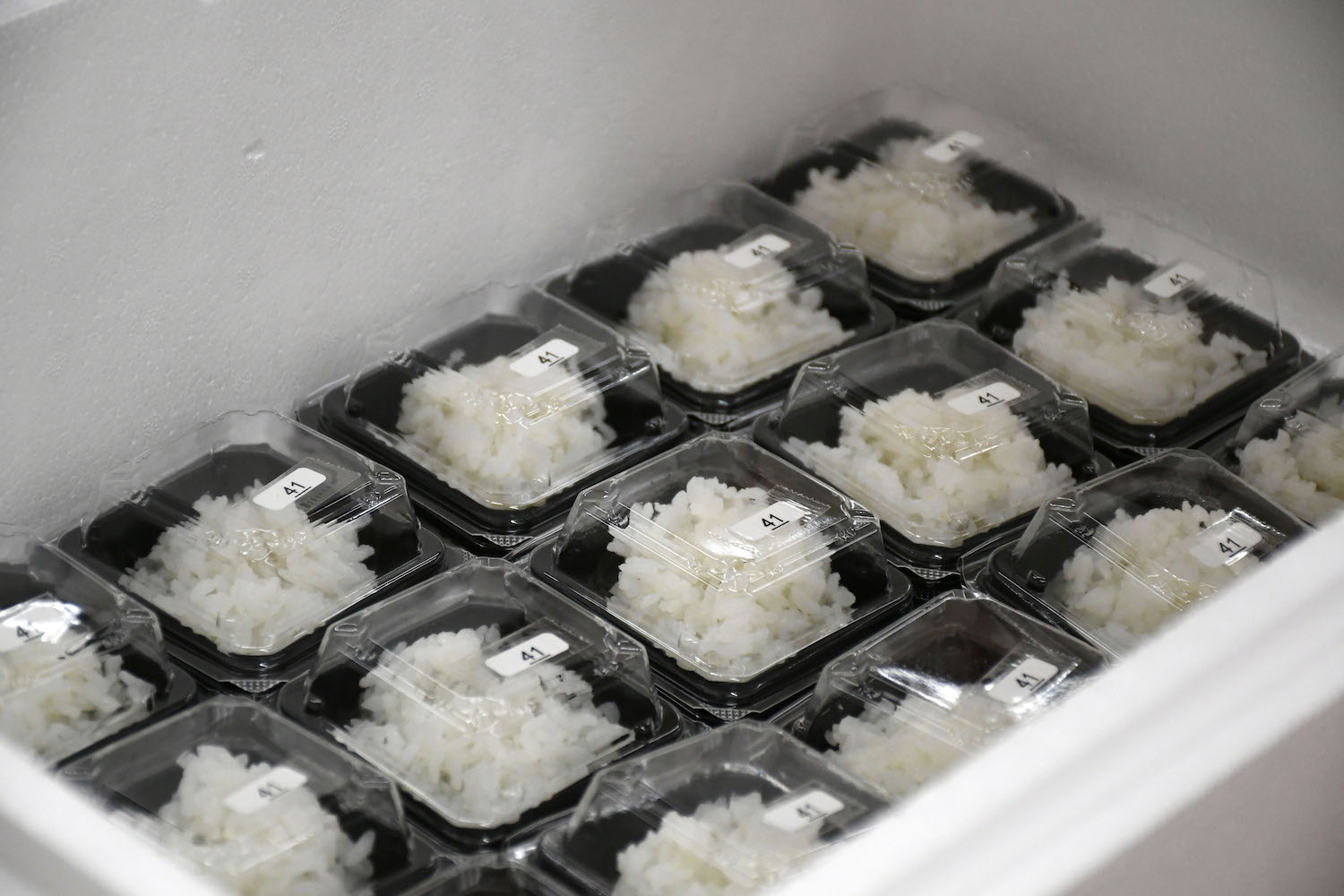 Small variations in soil, weather, water, and topography have an impact on a rice’s flavor and texture.

Rice—the seed of a grass—is thought to have been brought to the Japanese archipelago from China some 3,000 years ago. It wasn’t until the late 19th century that Japan began breeding the grain for improvements. The first rice cultivar, Riku-u 132, was released in 1921 with great fanfare . Back then, the government kept tight control over rice, and it set a goal of developing higher-yielding plants to feed an expanding population. Rice surpluses caused by bigger harvests and declining consumption led the government to curb production in 1971. That’s when farmers started focusing on quality instead of quantity, encouraged by a grain inspection organization’s new annual list of grades for brands grown in different regions. The government’s decision to open the market to competition in 1995 finally allowed consumers to tap the country’s incredible diversity of rice—and unleashed a flood of new brands being marketed to a new generation of rice lovers, who were willing to pay as much as ¥5,000 (almost $45) for a five-kilogram (11-pound) bag.

Today, the average Japanese person eats 118 pounds (53.5 kilograms) of rice a year. That sounds like a lot—Americans eat about a fifth of that—but it’s less than half of the per capita consumption in 1962. Diversifying diets and trendy low-carb regimens are part of the reason. Japanese policymakers now fret about “kome-banare”—a collective distancing from the grain—and what it’s doing to the country’s low food self-sufficiency rate and a farm sector with a shrinking, aging workforce. It’s not hard to imagine why government and industry officials would want people to think of rice more like a fine Bordeaux, as more than just a belly-filler.

Among the roughly 800 rice cultivars that have come out of Japanese labs, consumers have a clear favorite: Koshihikari. Released in 1956, it has outsold every other brand for years. Koshihikari is now grown in all but a handful of the country’s 47 prefectures, commands the highest average prices, and accounts for a third of the rice that’s planted annually. If there is an ideal style of rice for oyakodon or matsutake gohan, or to eat plain with only a side of pickles, Koshihikari comes close. In surveys, consumers say they prefer its ultrawhite kernels, sticky-soft chewiness, and mild sweetness.

Some of the factors in Koshihikari’s balance of texture and flavor are known—how amylose, a type of starch, and certain proteins determine stickiness and firmness, for instance. But there are a lot of unknowns. At the Fukui Agricultural Experiment Station, and other public and corporate research facilities around the country, breeders are now at work on new varieties that have what consumers love about Koshihikari—but also will be low-calorie, high-fiber, cheaper to grow, and able to withstand hotter temperatures. 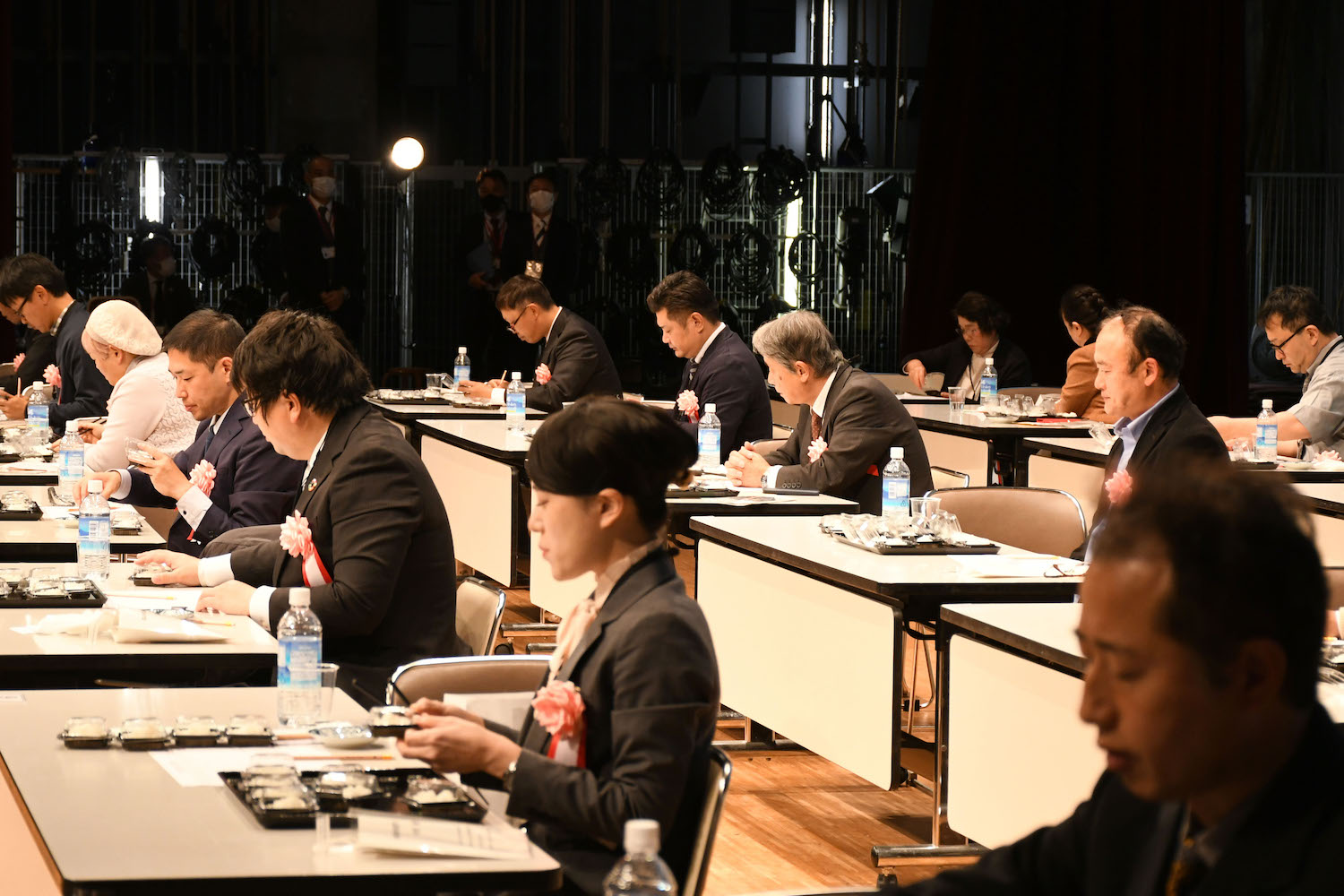 Judging at this year’s International Contest on Rice Taste Evaluation

Branding has made rice more appealing, even trendy. The problem is, consumers often equate brands with fixed characteristics, says Chiho Kashiwagi, a food writer who contributes to Forbes Japan and Cookpad News. The reality is far more complex. Small variations in soil, weather, water, and topography have an impact, and knowing how to make these work requires experience. “Rice connoisseurs know that it’s better to choose farmers, not brands,” says Kashiwagi, who lives with her family on a 54-acre rice farm in Inawashiro, a mountainous area of Fukushima prefecture.

That’s where rice contests can help. The International Contest on Rice Taste Evaluation—the national competition that determines what goes into the World’s Best Rice—was conceived to reward exceptional farmers, says Hideyuki Suzuki, the organizing committee’s chairman. For the final round, the judges taste 42 batches of rice, the best of a field of 5,000. Once cooked, the rice is allowed to cool for exactly 50 minutes. “When the judges try it, the rice should be around 40 degrees Celsius (104 degrees Fahrenheit), which is optimal for enjoying the taste,” says Suzuki, whose Rice Taste Appraisers’ Association in Osaka trains and certifies the judges. “It’s difficult for the judges because every finalist that’s made it this far is a standout.”

I have Suzuki’s comment about temperature in the back of my mind as I prepare The World’s Best Rice for dinner at home one night. I follow the instructions about soaking the kernels for one hour and cook the rice in a clay donabe on the stove. When it’s done an hour or so later, I consider waiting for it to cool, but instead I dive right in. It’s very sticky and firm, with a smell that reminds me of wet trees in autumn. I don’t detect umami, as the packaging has promised, but the lack of an in-your-face taste is reassuring. After a few bites of just rice, I finish the rest with mouthfuls of a miso-flavored pork-and-eggplant stir-fry and lotus root. The rice is not the star of the meal, but it was never meant to be. It’s there, extending and balancing out the flavors and textures of everything else, surreptitiously elevating the cuisine.

How to buy the world’s best rice: