Get a free recipe
Subscribe
The Snacking Cake Is Just Getting Started
By: Anna Hezel Illustration: Nick Hensley 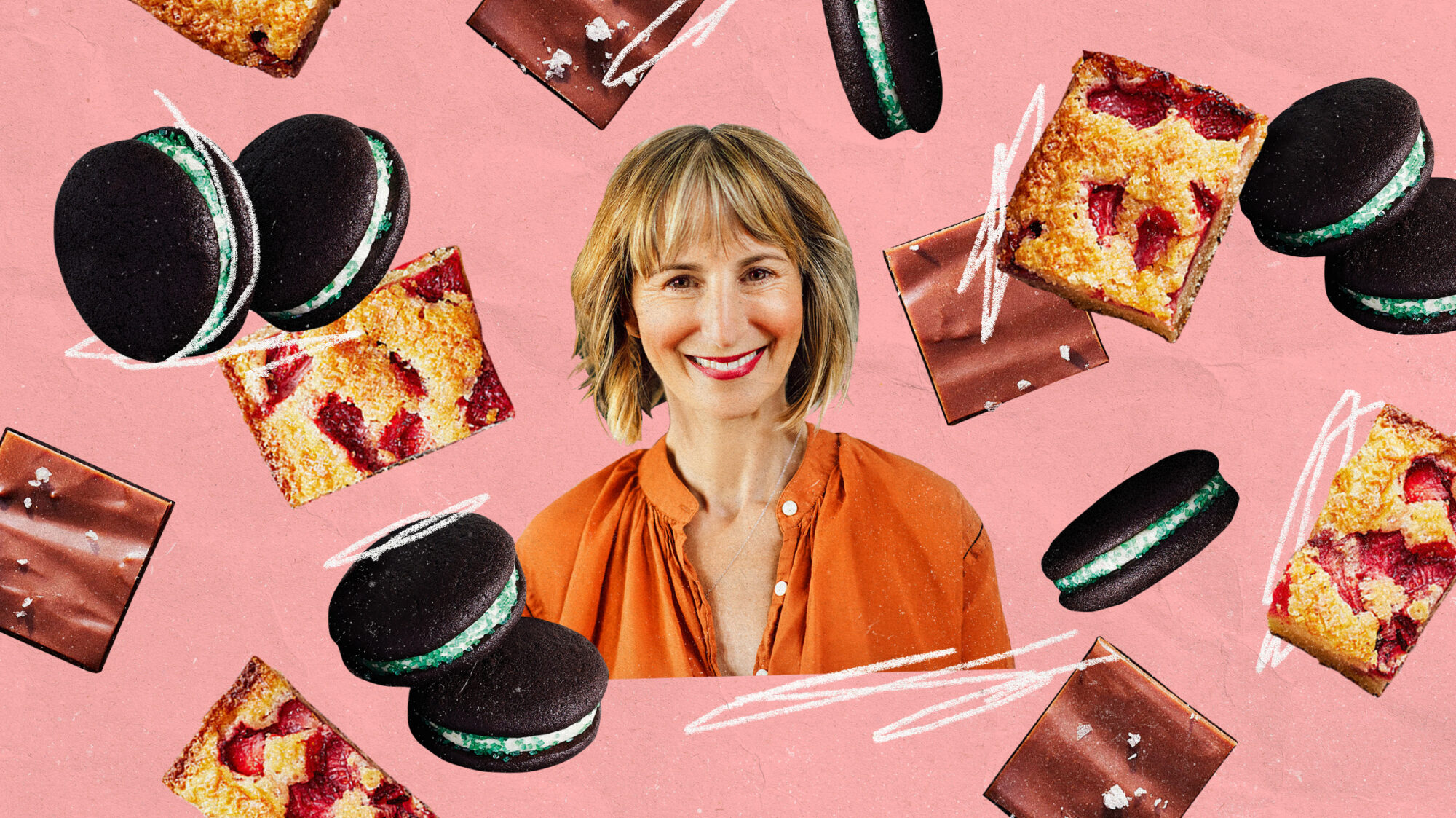 In a new book by Jessie Sheehan, every baked good can become a worthy snack.

Jessie Sheehan may have professional experience (she used to work at Red Hook’s famous church of the alt grain, Baked), but in her new book, Snackable Bakes, she’s on a mission to show you that even with a short ingredient list and half an hour of free time, you can bake something to be proud of—and to share proudly with your TikTok followers.

The author of The Vintage Baker and Icebox Cakes is a big proponent of marshmallows (there’s a marshmallow whipped cream hack in the book that will blow your mind) and doesn’t shy away from a little help from the candy aisle (malted milk balls make an appearance as a topping for a banana cake, and there are occasional candy canes and M&Ms). All the while, salty snacks (pretzels, potato chips, even Ritz crackers) play a supporting role. I caught up with Sheehan to hear about what makes a snackable bake and why we should think about the world of cakes, cookies, and pies as snacks.

Snacking cakes (and their snacky dessert brethren) are having a moment right now—why?
Funnily enough, I have been a snacking cake fan from way back, as the combination of the words “snack” and “cake” in the name, as well as the underlying concept (cake as snack), really speak to me. So applying both the name and concept to ALL the treats in my new book was kind of just a logical move in my world.

I’m a big proponent of using a digital scale while I’m cooking and baking, but a lot of people seem really put off by the idea—maybe it seems too fussy or scientific. But you make a great case for why it’s kind of the opposite. What do you love about using a digital scale?
Oh, gosh: scales. I mean, I am literally the last person in the world to tell you that you need a piece of equipment in order to make a sweet (stand mixers, I’m looking at you), and I will go out of my way to rejigger recipes so that creaming butter in one or whipping egg whites in another need not occur. But a scale makes you a faster, more streamlined baker (aka a snackable baker) because it eliminates the need for extra bowls and measuring cups—and maybe even spoons and spatulas for scraping ingredients out of said bowls and cups. In short, a scale means less cleanup, so there’s nothing fussy or scientific about my attachment to mine—just a deep hatred of dirty dishes.

I noticed that you dedicate a whole chapter to vanilla (and you talk about adding more of a glug rather than a few drops to most of your recipes). Is there such thing as too much vanilla? And were there any recipes where vanilla definitely didn’t belong?
Honestly, you’re asking the wrong person, because in my world, there is never too much vanilla and, IMHO, often too little. I’m not sure there are any recipes for sweets where vanilla does not belong, ’cause it seems to me that vanilla, like salt, helps other flavors sing. So, though I definitely pull way back on it if I am adding another extract, like peppermint or almond or fresh lemon juice, I will still add a little vanilla to the recipe to help those other extracts or juices do their flavorful thing.

Sweetened condensed milk comes into play with a few really cool recipes—why is it a great addition to Rice Krispies Treats?
Do I ever love sweetened condensed milk. And although I adore it in no-churn ice cream, no-bake cheesecake, and fudge, among other treats, I really love it in Rice Krispies Treats. When added to the melted butter and marshmallows, sweetened condensed milk not only adds an otherworldly milky yet toasty flavor to the treats that marries beautifully with the buttery vanilla vibe that is already happening, but it also makes them chewier and softer—and not in a gross, mushy way. I mean, you know how sometimes RKTs are just a little too crispy (okay, hard), particularly on day two? These are born soft and chewy, and they stay that way for a good three to four days.

I grew up making a lot of saltine toffee, and I noticed that your book has a cool riff involving Ritz crackers. Have you always made this with Ritz crackers? What do the more buttery crackers bring to the table here?
I love that you love saltine toffee. I, on the other hand, was raised under a rock and had no idea such a delicious treat existed until way later in life (in fact, my introduction was at a Passover seder, at which matzo was substituted for the saltines). So, I have not always made saltine toffee with Ritz crackers only because I haven’t always made it. But wow: buttery crackers bring so much to the table that I hardly know where to begin. First off, I’m not sure there’s much of a contest when you are comparing saltines to Ritz. I mean, saltines are all well and good if you have a bellyache or a bowl of soup that is in need of some crushed crackers, but rich, salty, buttery Ritz crackers are just fire. Toffee is all about the butter anyway—and the salt, for that matter—so the genius of coating Ritz crackers in a buttery toffee cannot be overstated. Saltines are like a blank canvas that gets all zhuzhed up with the toffee and chocolate. But Ritz crackers are already bringing so much flavor to the party, and that flavor has toffee written all over it.

Strawberry Sheet Cake
An easy snacking cake that will light up any springy picnic.

Tahini Milk Chocolate Bars
A nutty, oat-and-tahini cookie base is coated in a rich blend of melted milk chocolate and tahini.