Get a free recipe
Subscribe
The Many Ways to Bake Those Beans
By: Jessica Battilana Illustration: Justin Volz 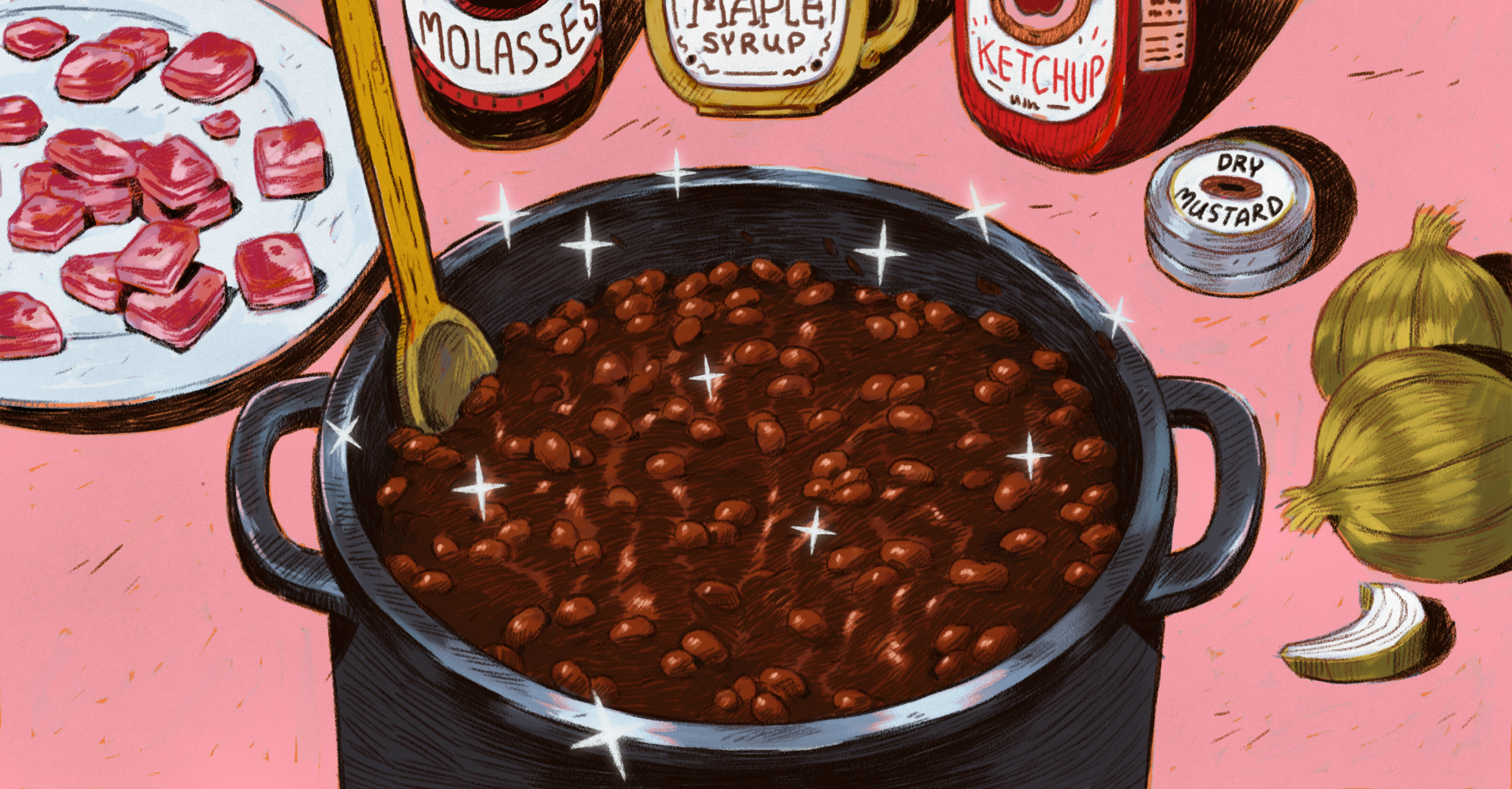 They might bury them in a fire pit. They might shake in some dry mustard. Moxie soda might find its way into the pot. New Englanders are serious, passionate, combative about their baked beans.

I once drove seven hours to watch a man lower a pot of beans into an earthen pit lined with hot coals. The trip was the culmination of a short-lived but passionate obsession with baked beans—one that took me to church suppers, truck stops, and living-history museums throughout New England and, eventually, back to my mother’s kitchen.

Igor Sikorsky—proprietor of Bradford Camp, a remote hunting-and-fishing camp on the shores of Maine’s Lake Munsungen—backfilled the pit with shovelfuls of dirt, creating a sort of baked-bean burial site. Then we waited, drinking several gin and tonics and talking about the history of the helicopter, which his grandfather invented, to pass the time. Five hours later, he and I dug up the cast-iron vessel, removed the lid, and breathed in the sweet molasses-y steam. We each scooped up a spoonful and ate it, burning our tongues in our haste. That time in the dirt, the low, steady heat of the pit, had transformed the beans. They’d absorbed the flavor of the molasses and salt pork, but also a hint of wood smoke, and the starch from the beans had thickened the cooking liquid, making it almost creamy. These were damn fine beans. Per Maine tradition, we ate them for supper that night, with hot dogs alongside.

Sikorsky and I—bean aficionados and traditionalists both—were re-creating a meal that would have been familiar to any 19th-century Maine lumberjack. High in protein, durable, and cheap, baked beans have been a staple of the diet of New Englanders since Native Americans first introduced their low-and-slow method of cooking beans with bits of fatty meat and maple syrup to European colonists.

Since then, baked beans have been a Yankee mainstay. Traditionally served for Saturday night dinner, then reheated the next day for the Sabbath, when cooking was prohibited, baked beans were such a staple of the diet of early Bostonians that they gave the city its nickname, Beantown. Though the recipe is fairly prescribed, varying little over the course of history, there are some regional variations.

Boston baked beans are typically made with navy beans; head north and the bean of choice is likely to be Jacob’s Cattle or Yellow Eye, or perhaps Great Northern or Soldier. In parts of New England that produce maple syrup, like my home state of Vermont, it’s often added, either along with or instead of the molasses.

A fourth-generation Vermonter married to a Bostonian, my mother knows baked beans. She bakes them in a two-handled earthenware bean pot, with a wide belly and a narrow mouth, which allows for slow cooking without burning.

Like a proto slow cooker, heavy earthenware bean pots are perfectly suited to their task and are handsome to boot; often, the upper third of the pot is glazed a shade you might describe as “baked-bean brown,” a sort of mahogany brown. Antique bean pots often turn up at antiques stores and yard sales (casualties of our speed-obsessed cooking culture, no doubt), though new ones can be purchased inexpensively.

Discovering a bean pot identical to my mother’s—a real McCoy, made by the now-defunct Ohio-based McCoy pottery company—in a heap of garbage outside of a San Francisco apartment a few years back filled me with the sort of wild joy I imagine a fashion-obsessed person might feel if they found, say, a Birkin bag at Goodwill.

Igor Sikorsky cooks his beans directly in the earth, like the 19th-century Maine lumberjacks did. Photo by Rob Brodman.

My mom uses navy beans, which have been soaked overnight and then simmered until, as she instructs, “the skins peel back when you blow on a spoonful.” (This is pretty much the most charming description of doneness I can think of, but put more plainly, you really want to keep going until they’re tender). They’re drained, then added to the pot along with a mixture of molasses and maple syrup, ketchup, some cubed salt pork, and an onion. Following my gentle suggestion, she now adds dry mustard powder, too.

Her recipe, which has in turn become my recipe—my culinary dowry—produces creamy, syrupy beans, their sweetness tempered by any sort of salty meat you might think to serve alongside, from ham or hot dogs to ribs and grilled chicken. My favorite way to eat them, though, is cold, either from the container in which they’ve been stored or sandwiched between two slices of bread, which may sound gross but I assure you is perfection.

In general, I’m wary of uptown versions of baked beans, but I’ll make an exception for the ones made by my friend Matt Jennings, the chef of Boston’s Townsman restaurant. This recipe will be in his forthcoming cookbook, Homegrown: Cooking From My New England Roots, which I helped write. In a radical departure from tradition, he uses kidney beans, bacon rather than salt pork, and instead of molasses or maple syrup, he sweetens these beans with Moxie, the official soft drink of Maine.

First introduced as a medicinal tonic in 1876, it’s a cola-like soda flavored with gentian root, which lends a bitter edge. The “secret ingredient” gives Jennings’s beans a subtle fruitiness and a what’s-that-I’m-tasting complexity (in a pinch, substitute Dr. Pepper). He doesn’t even cook them in a bean pot!

You’re not going to find them on a truck-stop menu. Nobody’s toting these to a church supper. My mother would be horrified. But I’m neither purist nor Puritan, so I can admit that these are very good beans, and that they make a fine cold baked-bean sandwich, should you be so inclined.

Long, cold New England winters would be unbearable if it weren’t for braises. There’s a solid six months between picking the last of the summer’s tomatoes and trimming the first spear of asparagus, and during that time I turn to sturdy, long-cooked recipes, like these short ribs, which have the added benefit of warming your kitchen as they cook. This is a recipe intended for a cold day, when the wind is blowing sideways and the snow shoveling feels never-ending.

Moxie soda is a beloved New England soft drink first created in 1876 as a medicinal beverage (and is the official soft drink of Maine, where the founder was born). It’s flavored with gentian root, giving it a bitter flavor, with hints of cola, root beer, and Dr Pepper, which is what you should substitute if you can’t find Moxie where you live. It’s the secret ingredient in these beans, giving them a complex, sweet, and fruity flavor.

A mustard jus, reduced until it coats the back of a spoon, finishes the dish. It adds a tangy, acidic element to the mellow, tender meat. Like all braises, these short ribs improve upon sitting, so make them the day before you plan to eat them if you’re able; the beans can also be made a day ahead and reheated.

Jessica Battilana is a San Francisco-based food writer. Her first solo cookbook, Repertoire, will be published by Little, Brown, in Spring 2018, and she writes a bimonthly column by the same name for The San Francisco Chronicle.