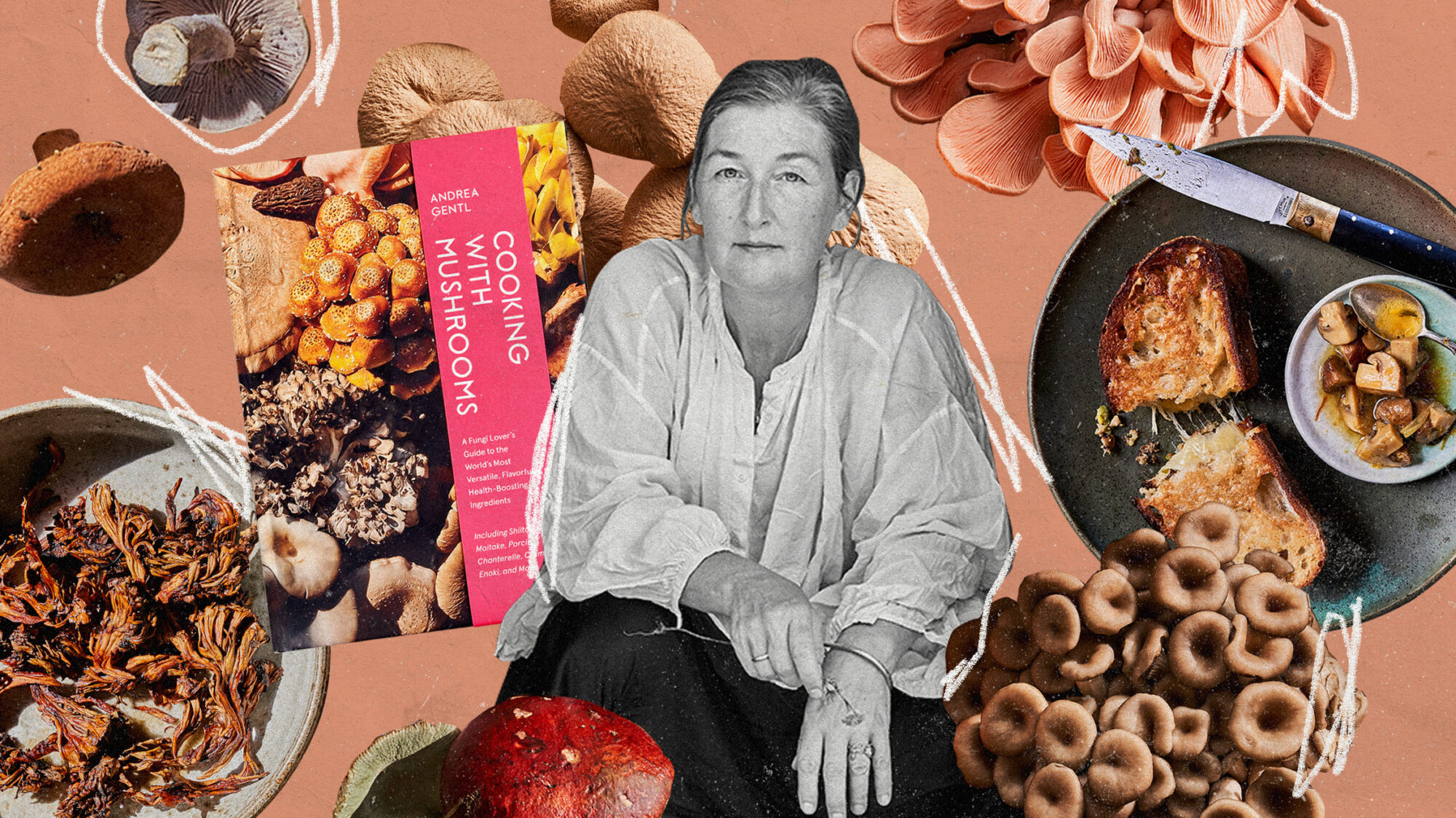 Photographer Andrea Gentl’s debut cookbook makes the most of this mushroom moment.

It’s an excellent time to have a fungi fixation. Walk down a well-stocked snack aisle or even a Paris Fashion Week runway, and you’ll spot mushrooms appearing in unexpected places, from spice-roasted jerky to silky plant-based leather. But for home cooks, the most exciting developments are happening in the produce section of the grocery store, where innovations in mushroom growing are translating into a kaleidoscope of available varietals that go far beyond baby bella. There’s frilly maitake, puffy lion’s mane, slender enoki, and a new cookbook that makes use of them all: Cooking With Mushrooms: A Fungi Lover’s Guide to the World’s Most Versatile, Flavorful, Health-Boosting Ingredients. The aptly named debut cookbook from prolific food photographer Andrea Gentl unlocks the vastness of the fungus kingdom’s many culinary applications, from finger-licking popcorn dust to semisweet, maple-spiked ice cream.

Gentl’s fascination with fungi began as a child, doodling the toadstools she’d spot on the outskirts of her family farm in Western Massachusetts. Her education on cooking with mushrooms came later, as her career as an in-demand food photographer took on her on assignment to meet chefs and foragers like Connie Green in the Bay Area. More than 30 cookbooks later (including collaborations with her photography partner Martin Hyers for projects like Tartine and That Sounds So Good), Gentl is mining her coveted aesthetic and honed culinary skillset for a book of her own that shines light on the still often underappreciated members of the mushroom kingdom.

“Fungi are here for us. They are the decomposers and recomposers of life,” she says. “Fungi are the beginning and end of the circle, and they taste pretty damn good, too!” I called up Gentl to talk about her tricks for making mushrooms look so delicious and why fungi are secretly great in desserts.

In your introduction, you write that “once you start cooking with mushrooms, you never stop.” Why is cooking with fungi so perpetual?
Mushrooms are a perfect food. They’re all wildly delicious, but not all mushrooms taste the same. Some are fruity, while others have notes of spice or pine, nuttiness, or a deep earthiness. I am always thinking of new ways to use mushrooms—they can be seared, roasted, boiled, poached, grilled, fried, sautéed, and pickled. Mushrooms are also an excellent replacement for meat, as they have similar amino acids and beta-glucans to meat, giving them a similar umaminess and texture. At the same time, some have adaptogenic properties that help to fight stress and boost immunity.

I love some of the more unexpected recipes in the book, like the porcini crème caramel. What do mushrooms lend to sweet applications?
Mushroom powders are key! Dehydrating mushrooms and buzzing them into a fine powder creates a more intense flavor with unique depth that pairs super well with deeply flavored, dark sugars such as maple, molasses, and jaggery. I like to pair my mushroom powders with other umami flavors, such as chocolate, miso, and soy, so most of my sweets have a savory aspect.

What’s an underrated mushroom you wish could become as common as cremini?
Oyster mushrooms! They are much more beautiful than cremini, but like cremini, they can be wildly versatile. Oyster mushrooms have a relatively mild, earthy flavor—it’s a little nutty, and some say there’s a little anise on the back end. The pink and yellow varieties are fragile, only lasting a day or two, and are better suited for something delicate, sautéed on top of creamy scrambled eggs or toast. At the same time, the blue and gray, in my opinion, are much hardier and can last a week or so. I love the way they grow in giant flushes. Roasting a large flush of oyster mushrooms is one of my favorite ways to cook them.

You’ve shot so many cookbooks and magazine stories. What was your approach for this cookbook?
I kept a simplicity to the photographs, but I was constantly pushing up against my natural inclination for mess, which lends authenticity to food photography. I want my images to feel as though someone has just stepped away from the scene—a drip, a crumb, a just-squeezed lemon, a wine stain.

I love the mushroom ceviche tostada. The sauce drips on the plate, the abundant and messy herbs, and the color palette make this my favorite image. I hand-carried the plate back from Oaxaca. I found the roast chicken with miso mushroom butter hard to shoot. It’s so incredibly delicious, and I couldn’t quite capture it whole in a way that showed the mushrooms and potatoes, so I ended up carving and plating it.

Mushrooms are having a big moment right now—in food and beyond. What do you think is driving this craze, and what do you hope it might lead to?
So many factors are driving fungi fever. I don’t think we can deny the powerful impact of the film Fantastic Fungi, or the popularity of biologist and writer Merlin Sheldrake or mycologists such as Paul Stamets or Giuliana Furci, in bringing fungi culture to this specific moment.

The wellness boom, along with the rise of cultivated mushroom farms, psilocybin research, biotechnology, and fashion (mushroom leathers), also all contribute to this moment. Eating more mushrooms will lead to less agricultural farming and, in return, fewer greenhouse gases. We can take fungi technology to the next step and begin to use it on a large scale for plastic replacement, or for replenishing our depleted soil and toxic dumping grounds. Fungi are integral to our survival, evolution, and extinction. They were here before us and will be long after.