Get a free recipe
Subscribe
The Librarian of Mismatched Plates
By: Anna Hezel Illustration: Nick Hensley 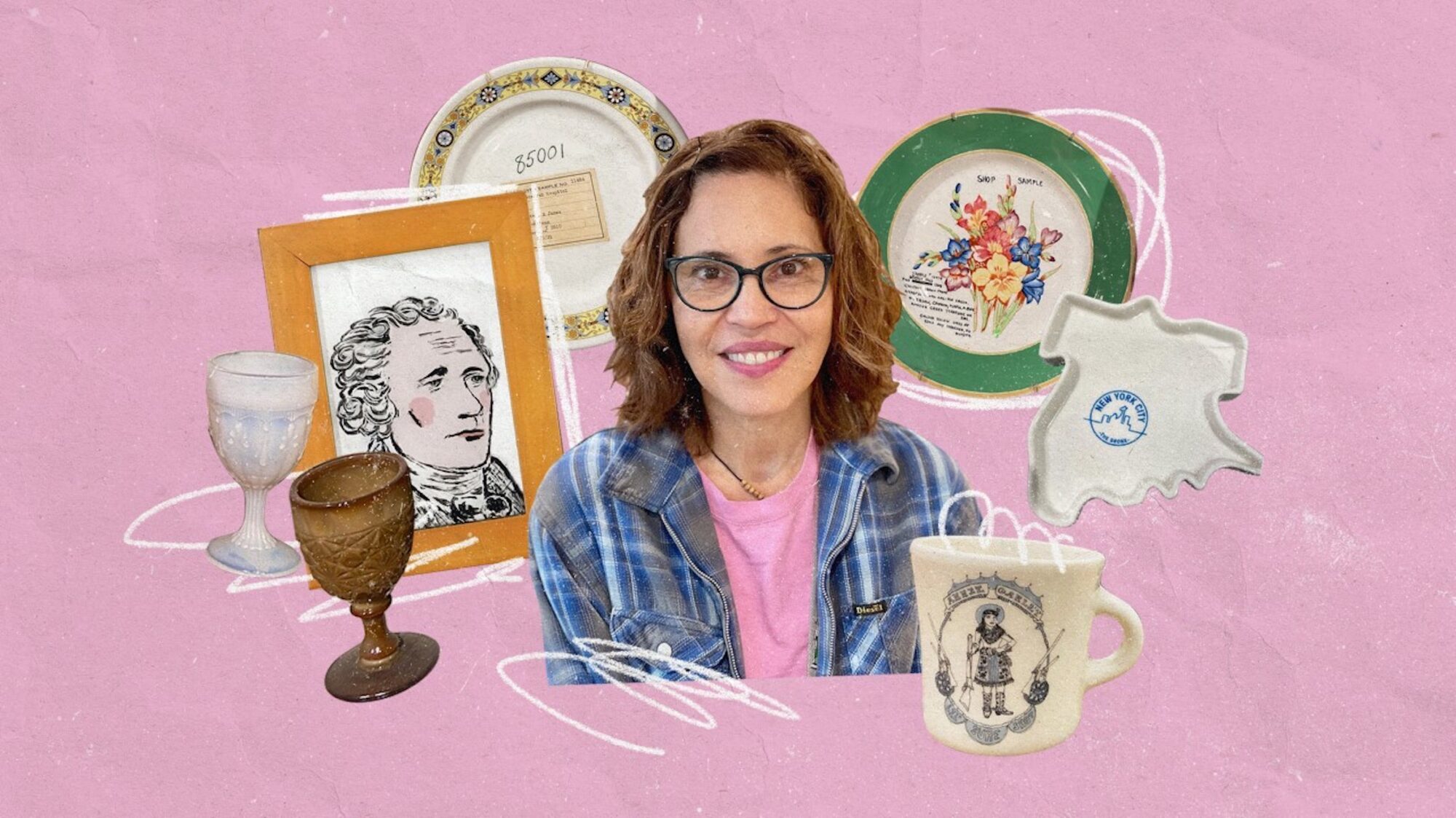 For Julie Gaines, the owner of NYC’s Fishs Eddy, collecting dishes is a glimpse into America’s history of roadside diners, airlines, hospitals, and country clubs.

“This embodies everything to me. This is what it’s about. Right? Hold this.” Julie Gaines hands me a heavy, round-bowled beige coffee mug that she’s tucked away safely on the mezzanine level of her Manhattan store, Fishs Eddy. She’s right. It’s the kind of perfectly proportioned diner mug that would make any coffee taste great—and it exemplifies her curatorial sense for sturdy vestiges of Americana.

Even if you’ve never set foot in the crowded china shop that sits on the corner of Broadway and East 19th Street in the Flatiron District—even if you’ve never set foot in New York, for that matter—it would be difficult to avoid Fishs Eddy’s stamp on American culture. The store’s famous New York skyline dishes have been the subject of the Port Authority’s ire and John Oliver’s comedy. Amy Sedaris has both collaborated on designs for the store and bragged on national television about shoplifting from it. Julian Schnabel has hammered Fishs Eddy plates into smithereens and incorporated them into his art.

But even beyond the pop culture scope of artists and comedians, the store’s mix-and-match approach to collecting, selling, and producing original china has changed the way Americans set the table since opening a little more than thirty years ago. There may have been a generation not too long ago that stuck to pristine sets of matching dishes, but a stroll through Fishs Eddy is enough to convince even your grandma that a tan-and-rust mid-century creamer and sugar set from a country club is right at home alongside a sturdy 1920s serving platter bordered with green flowers.

For Gaines, running Fishs Eddy has also been a bittersweet way to document and celebrate the industry of American-made restaurant china, which has died out as Rust Belt factories in places like Buffalo, New York, Bedford, Ohio, and New Castle, Pennsylvania, started to close down in the 1980s and ’90s. Over cans of seltzer on a recent morning, she showed me some of her own collection of glass goblets, country club plates, mustard crocks, and toast warmers. —Anna Hezel

When you first opened the store, where were you getting dishes from?
We started digging through the Bowery, because it used to be the restaurant supply district. We opened the shop 35 years ago, and we weren’t sure what we were going to sell. (The family story is that we couldn’t get other jobs.) So we started digging around the Bowery in the basements, and the first restaurant supply we went into was filled with this [gestures around] times a million, all mixed and matched, totally covered with soot. Dishes from restaurants and hotels and academic societies and airlines and railroads and everywhere. It was love at first sight.

Then we went next door to that restaurant supply, and their basement (and subbasements) were filled, too. And then the next one. So we just started getting everything. Make no bones about it, if it were today, we wouldn’t stand a chance, with eBay and pickers and stuff. But we were at the right place at the right time, so we brought it home to the store, and we cleaned it up, and people went crazy for it.

It’s funny, because we get a lot of credit, like, “Fishs Eddy started the whole mix-and-match thing.” But we were really finding it that way—it’s not like we were sitting around saying, “Let’s get people to mix and match.”

Have any restaurants in New York embraced the mix-and match aesthetic?
Oh, yeah, especially the small ones in Brooklyn. But I don’t know if they did it because they thought it was cool or if they did it out of necessity. We just became a landing ground, little by little, for all the manufacturers—all the mistakes, all the runoffs, all the seconds, all the dishes that never got picked up.

Have any New York restaurants bought inventory from you?
Yeah, we sell to restaurants all over. Jacob’s Pickles is always in here. Danny Meyer. They’ll come by and pick stuff up—everyone. We’re the perfect place, if they need just two dozen of something, to run in and buy it.

How much have you learned, over the course of collecting and selling these pieces, about how eating and dining has changed?
We watched the whole birth of the Food Network. That came on the scene. Celebrity chefs—that wasn’t a thing when we started. Videos about cooking. That really changed everything. People used to come in for the historic dishes. And now people are just finding dishes and then moving on to their next dishes and their next dishes. People are just excited about food and dining and eating and preparing food.

It’s funny, because we get a lot of credit, like, “Fishs Eddy started the whole mix-and-match thing.” But we were really finding it that way—it’s not like we were sitting around saying, “Let’s get people to mix and match.”

How long were you closed for in-person shopping during the pandemic?
We were closed only for the amount of time we had to be closed. I don’t remember—it was several weeks. We have a different situation from most stores, because I really rely on international tourism, and that’s come to a screeching halt. And we couldn’t get product anymore. Because of all the [American] manufacturers closing, I’ve had to go offshore. So I go offshore, and I go a lot to Mexico, but the minimums went from several dozen to several thousand. If I do a mug, I have to do a lot.

Right now, we’re really celebrating all the vintage stuff we have downstairs. It’s funny, because there’s a lot of stuff on that vintage table of sample plates, and every time I go through, I’m like, “This should be upstairs. We should save this.”

How much of a rabbit hole has this business led you down in terms of researching dishes and their history?
I’m not a research-y kind of person, but I know what I like. I collect what I like. I’d say it’s a character flaw of mine that I don’t go down rabbit holes. That’s a different kind of competence.

And how much do I have to research this? Look at this. Look at what this says [pointing to a dish]. “1939 World’s Fair! Toffenetti!” That was a very famous restaurant at the World’s Fair. The one below it is from 1915, and it’s from a maternity ward. Can you imagine? I have kids, and when I was giving birth, I didn’t give a crap about the dishes.

How do you go about acquiring new inventory these days?
I have what I have, as far as this collection. I never pass a flea market or an antique store without going in. I mean, I’m obsessed. So definitely, occasionally, I’ll find something and bring it back. But I’m not out looking for it, because I have so much here.

Would you ever go online-only?
I read the article at the beginning of the pandemic by Gabrielle Hamilton, who owns Prune. She just asks herself, in a very mature way, “Does New York need me?” I don’t know. Does New York need us? I needed New York for so many years. But I’m trying to be very level-headed and mature about it. I’m not saying I won’t fall apart if and when we shut the doors. This has been my office for several decades. But I’m just thinking about that now. I’ve learned so much, I’ve done so much. I’m so proud of the store. I’m so proud of everyone who’s ever worked here. We’ve really pushed the envelope. And it’s such an overused phrase in retail now, but we really were disrupters without even trying. We’ve been political, we’ve put our two cents out. And I say the same thing every time I answer hate mail—we do it because we can.

OTHER BOOKS TO BUY, READ, AND COOK FROM:

To read more about the Fishs Eddy story, check out Julie Gaines’s 2018 book Minding the Store, illustrated by her son, Ben Lenovitz.

Last week, we spoke to Peter Hoffman about his new memoir, What’s Good?, which looks at the grind of running a restaurant, from the daily farmers’ market haul to the lifesaving refrigerator repairmen.

There’s never been a more exciting time to eat vegan, and Miyoko Schinner’s The Vegan Meat Cookbook is proof.