Get a free recipe
Subscribe
Telling the Story of Arab Home Cooking, from Beirut to the East Bay
By: Amanda Arnold Illustration: Nick Hensley 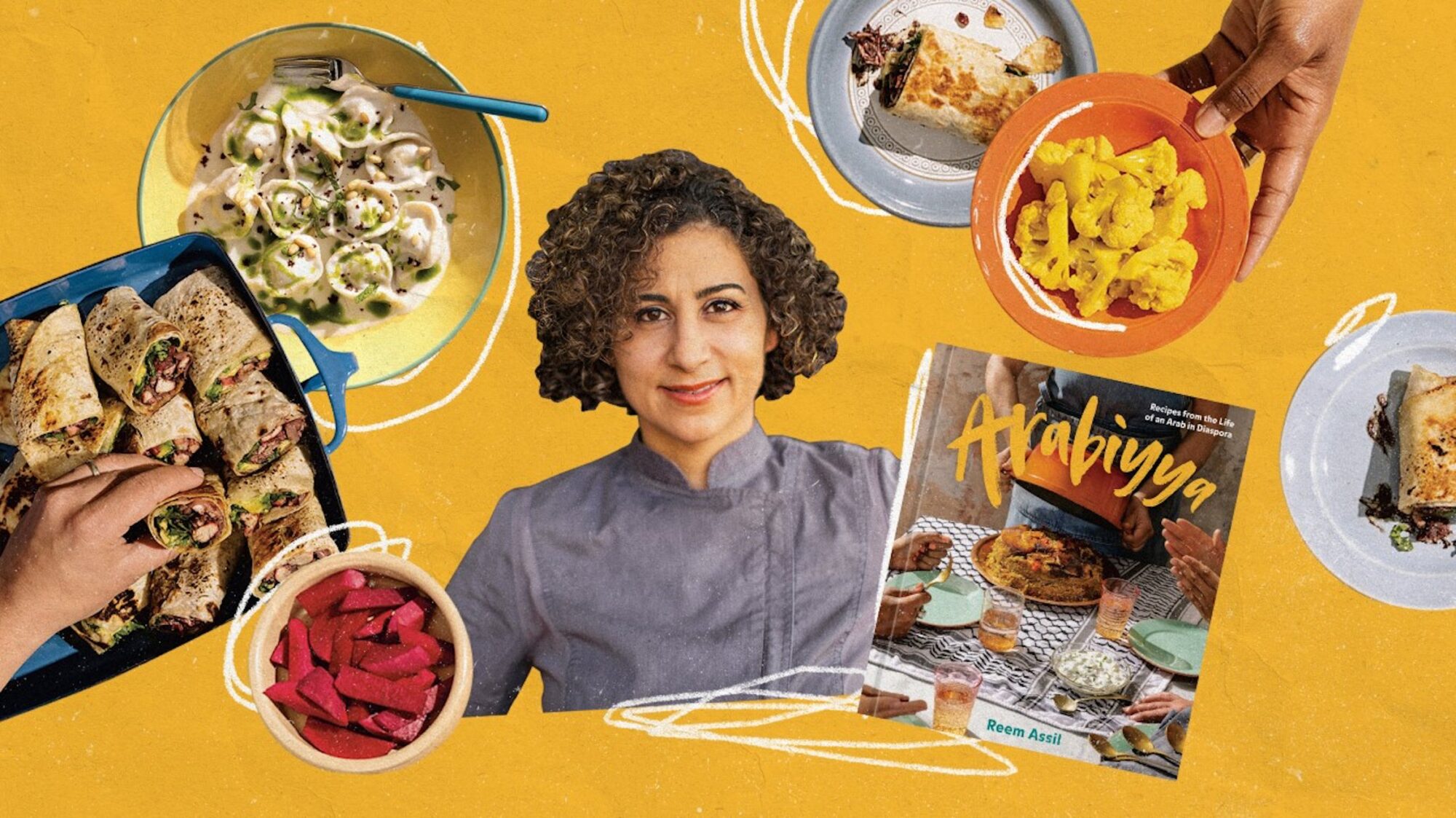 Reem Assil’s cookbook, Arabiyya, shows that great hospitality is easy to pull off—as long as you have enough za’atar-covered man’oushe to go around.

Though many cultures uphold hospitality as a central virtue, in the Arab world, it’s long been a veritable tool for survival. Welcoming outsiders into one’s home and sharing nourishing meals is “how my people have survived desert travel, wars, and invasions,” Palestinian-Syrian chef Reem Assil writes in Arabiyya: Recipes from the Life of an Arab in Diaspora.

These values are on display at the nationally acclaimed Reem’s, Assil’s Oakland-based restaurant that has landed her in the final round for the prestigious James Beard Foundation Award for Outstanding Chef, as well as in her cookbook, out this month. Sourced from family kitchens and restaurants stateside and in the Levant, Arabiyya’s 100-plus recipes underscore the vastness and complexity of Arab cuisine, providing rich context for how each dish is served and eaten. Cheese-filled buns get baked in a honeycomb pattern and topped with fragrant honey syrup in khaliat nahal, a Yemeni treat Assil discovered at a bakery in Dearborn, Michigan, “the promised land for Arabs in America.” In shish barak, a recipe from the inventory of her mother’s best friend, tortellini-shaped lamb dumplings are tossed in yogurt sauce and drizzled with vibrant mint oil.

Interlaced with the recipes are moving accounts of the limitless resilience Arab communities have mustered in the face of gross injustice and hardship—some of which are more historical, while others center on Assil’s intimate experiences as an Arab in diaspora. “Food was the gateway for me to really look at myself and my roots and where I fit on a lineage and where my people come from and where they’re going,” says Assil. “When I opened Reem’s, and when I wrote this book, it was important to say that I’m Arab and there’s nothing to be ashamed of.”

Ahead of Arabiyya’s release, Assil and I discussed the significance of the popular street food man’oushe (a yeasted flatbread commonly slathered with fragrant za’atar and olive oil), how food helped her reconnect to her identity, and the pernicious belief that Arab cuisine isn’t sophisticated.

I’d love to start off by talking about the recipes—how you sourced them or conceived of them and then went about narrowing them down.
I really wanted to show the expansiveness of Arab cuisine and that it’s just not this cookie-cutter thing. The dishes are sort of a culmination of all my experience. They’re as much Californian as they are Palestinian. They’re as much a reflection of who I am as a cook as they are of the experiences I got from my grandma. Arab food bends and shapes, depending on the context around it, and that’s something to celebrate.

I wanted to feature technique and methodology that shows that Arab cuisine is very sophisticated, so I tried to pick dishes that might showcase that. For example, the stuffed squid; people might know that from the Spanish dish, but actually, we were stuffing squid for ages.

The dishes are sort of a culmination of all my experience. They’re as much Californian as they are Palestinian.

It makes sense you’d want to highlight how complex and technical Arab cuisine is, given Americans’ widespread ignorance, willful or otherwise, of Arab culture. And because Arab cuisine has been so reduced, as you write in the book, there exists the pernicious belief that the food requires elevation.
The more I learned about my foodways, the more I realized that it was elevated in and of itself. Some of the techniques are so sophisticated—for example, in the way that people preserve and ferment, and cook meats and braises. I was like, “Oh my God, this would put any chef to shame.” And I think it’s rooted in racism, you know.

The cultures that are usually reduced tend to be browner and from regions that are often misunderstood. I often hear things like, “This is like an Americanized version of a man’oushe,” or whatever, and I’m like, “Actually, no, this is what you would see if you went to Lebanon or Syria.” Like, they cook seasonally, they have a similar climate to California, and they’re very sophisticated; they go to the farmers’ market and pick out the ingredients that are in season. So I wanted to debunk the myth that the cuisine is not sophisticated, but also show that you can create magic with very few ingredients. Some of my dishes are a lot more elaborate, but I try to show that you can do a lot with a little if you choose good ingredients and celebrate the place you’re in.

I’d love to talk specifically about man’oushe, which you popularized at one of your stalls at the San Francisco Mission farmers’ market and believe to be “the missing piece in Arab immigrants’ US food experience.” Can you elaborate on its significance, both to you and to Arab cuisine?
When people ask me about man’oushe, I always start with the root of that word, which I find so fascinating. It comes from the Arabic verb “naqasha,” which is the act of dimpling and shaping the dough. The bread just captures these amazing ingredients, including the za’atar, which is wild thyme, sumac berry, and sesame seed. I wanted to re-create the experience of an Arab street corner bakery—the smell, the feeling—and that led me to man’oushe, which is the quintessential street food of Lebanon, Syria, Jordan, and Palestine. It’s also what I grew up on. Even when we didn’t have fresh dough, my mom would slather Greek bread with oil and za’atar and throw it in the toaster oven, and we’d wake up to that smell of fresh-baked bread with za’atar. We would also drive 25 minutes to the local Armenian-Lebanese bakery to get a bunch of them, and then my mom would freeze them.

When I wanted to start Reem’s, I was going to all these business and entrepreneurship classes, and they were like, “You need to have one central thing.” And it was agonizing, because I wanted all the baked goods, and then I just had this “aha!” moment. It’s such a versatile flatbread; you can eat it like a pizza, or you can roll it up. I remember the first time we had our farmers’ market stand, I took a break and walked around, and I saw all these people with man’oushe in their hands. I was like, “Oh my God, I could be in Beirut right now.” It was a transformative experience and a gift to my people—you know, the nostalgia of seeing other people enjoying your food. We brought a piece of home here.

Let’s talk about Arab hospitality. How does the concept manifest in Arab culture, and why is the dinner table such a crucial component?
Every culture might say this, but hospitality is a central virtue for us. It roots all the way back to Bedouin culture, when we were traveling through the deserts and we’d welcome anyone, friends and enemies alike. It’s how we’ve survived through war and famine and all those things. And growing up in the United States—where everybody is so disconnected and the culture is so individualistic—I always had a yearning for Arab hospitality. Over time, I realized I got this amazing joy from inviting people into my home and cooking for them. Food is just the number-one way that Arabs show their hospitality. We are ready to host you at the drop of a dime. Like, it’s sacrilegious if we don’t have anything stocked in our freezer or something ready to cook. Obviously, the people that you’re hosting feel good, but you also feel good.

If you were to recommend a handful of recipes from your book for home cooks looking to expand their knowledge of Arab cuisine, what would they be?
That’s hard. There’s mutabal—what Americans know as baba ghanouj—which literally means to season something or make it tastier. The way we do that is with garlic, lemon, and tahini, and it’s the base of our dips, but the sky’s the limit on what you do. There’s the basic one with charred eggplant, but there are also ones with roasted beets, butternut squash, and chard. I would even go so far as to challenge people to think of other things they can make mutabal with, because there’s so much you can do with those three backdrop flavors. Another dish is musakhan, the quintessential Palestinian chicken dish. It’s basically chicken steeped in olive oil and sumac, and it’s a magical thing. 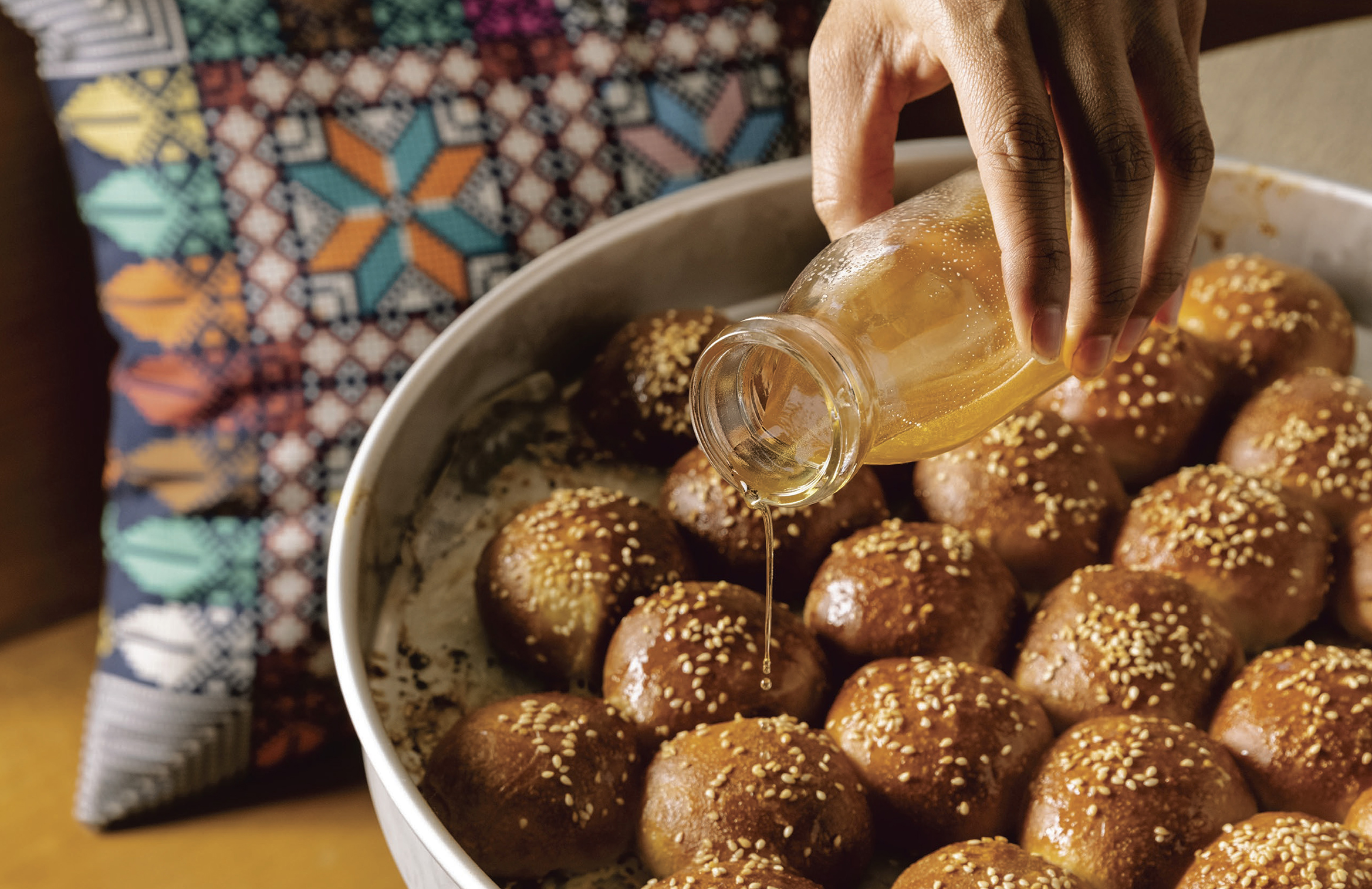 Khaliat Naha
These Yemeni buns are baked into a honeycomb-like cluster and drizzled with a floral honey syrup.

Musakhan
This chicken is steeped in olive oil and sumac and wrapped in flatbread.