Get a free recipe
Subscribe
Should I Fry a Shami Kebab?
By: Maryam Jillani 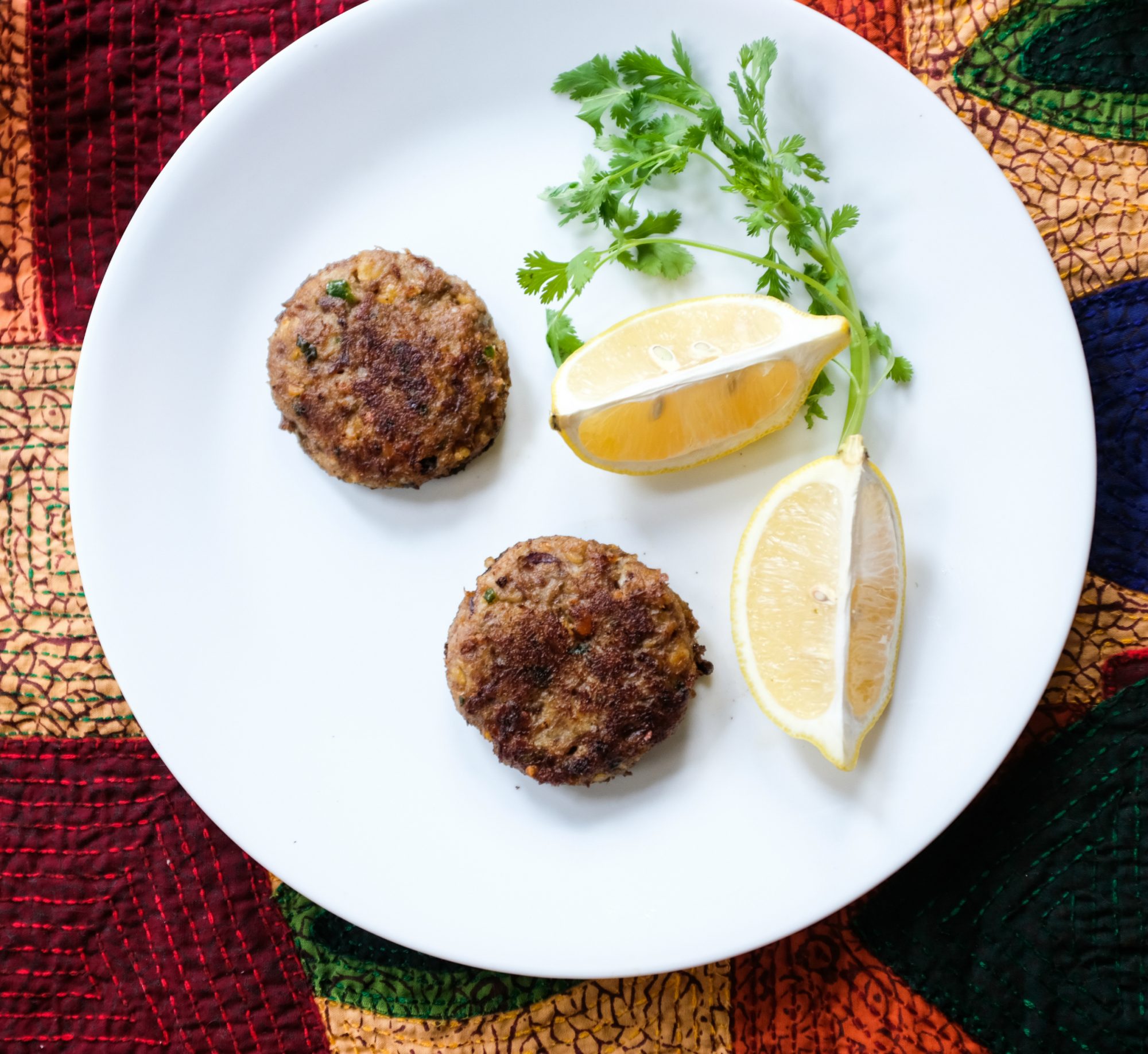 A teatime ritual in Pakistan, and a unique kebab recipe for all.

Few things give me as much joy as the words “Kebab tal doon?” (“Should I fry kebabs?”).

My mother always keeps a secret stash of frozen shami kebabs for surprise guests or tired evenings when you need a little lift. One of the perks of my job as an aid worker is traveling to my hometown, Islamabad, for work and enjoying downtime with my parents in the evenings. After a long day at the office, my mother frequently asks me whether she should fry some kebabs. The answer to that question is always an affirmative.

I left Islamabad for the United States nearly ten years ago and especially miss Pakistan’s teatime rituals, so I take my time to savor them when I’m home. In Pakistan, we normally eat dinner late (around 9 in the evening), so it’s common to have a snack with a cup of chai (tea) as soon as you return home from the office. Tea can be served alongside cake rusk—introduced to the subcontinent by the British, it’s a small slice of cake rebaked, crisped, and dried—or if you are feeling indulgent, something fried. When we were kids, it was often French fries. Today, it’s either a small minced-meat samosa, or on the best days, a shami kebab.

When you live in Pakistan, shami kebabs are easy to take for granted. They feature prominently as a side at a dawat (feast) or as a snack when you visit a friend or relative. On the streets, they have been transformed into a style of Pakistani burger—the bun kebab—where the fragrant meat is sandwiched between flaky burger buns and topped with a fried egg. When you move overseas, you realize that no kebab served at any restaurant quite compares.

What separates shami kebabs from other types of kebabs is their delicate structure. Boiling and mincing the meat, and then pan-frying the patties instead of grilling them, lends shami kebabs a silky texture and an impressive versatility. They can be slapped on toast, paired with rice and curry, or simply eaten on their own with some Maggi sauce (the subcontinent’s take on ketchup, but better). If prepared correctly, shami kebabs will dissolve in your mouth in a quiet explosion of flavor, making you reach out for one, or several more. A tea shop in Islamabad. Photo by Jehan Jillani

Preparing shami kebabs is a multi-step process that will eat up your entire afternoon. But in the end, the work is worth it, and a freezer full of kebabs can last a month or so.

Our home cook, Shehnaz, showed me how to prepare my mother’s recipe this past winter. Home cooks are common among many middle and upper middle income households in Pakistan. Many stay during an entire generation—long enough to see children grow into adults—and are an incredible repository of information and experience. While Shehnaz comes from a small, mountainous village from Pakistan’s northwest frontier province, Khyber-Pakhtunkhwa, she has learned the cuisine of the plains from my mother, who is of Punjabi descent and grew up in Rawalpindi.

In the interest of time, Shehnaz recommends that you boil the meat and lentils with onions and spices in a pressure cooker or Instant Pot. Once the lentils are soft and the water has dried out, you mince the meat-and-lentil mixture in a food processor and fold it in with egg, white bread, and thinly sliced herbs and red onions. After forming small patties, you pan-fry them, which helps keep the kebabs moist and tender. While some say shami kebab were developed in Lucknow, India, as a chef’s response to a nobleman’s challenge to create a dish that could be enjoyed even by the toothless (the nobleman is said to have lost his teeth because of his excessive lifestyle), that dish is in fact the galauti kebab. Galauti kebabs, like shami kebabs, are made with tenderized minced meat and are a specialty of Lucknow. But they are infused with a highly complex spice blend that befits Lucknow’s reputation as the picture of gentility in the subcontinent.

Shami kebabs were brought to the subcontinent by Syrians (“Sham” refers to Syria in Urdu), some say as early as the 13th or 14th century, just when Islamic culture had begun to take root in the region. They ultimately found their way into the kitchens of the Muslim Mughal rulers and now feature prominently in Mughlai cuisine—the royal cuisine of the Mughal Empire, which reigned over the subcontinent (what is now Pakistan, India, and Bangladesh) from 1526 to 1857.

Mughlai cuisine came to have an outsize influence on the culinary traditions of Muslims in the subcontinent. You did not have to reside in one of the Mughal culinary powerhouses, such as Lahore, in Pakistan, or Delhi, Lucknow, or Hyderabad, in India, to incorporate various Mughlai dishes into your day-to-day cooking. As a result, when Muslim families like my grandparents migrated from India to Pakistan and Bangladesh during the 1947 partition, they brought strains of Mughlai cooking wherever they went. It’s therefore no surprise that my friends in Dhaka and Delhi and I share a love for shami kebabs.

My mother’s recipe below yields about 12 to 14 shami kebabs. Fry a couple to serve alongside your main, and freeze the rest to prepare for a friend on their day of need.

“Kebab” is a misnomer for this silky, fried beef patty that is served as a side at a Pakistani dawat (feast), or as a snack with tea. Boneless beef chuck and yellow split peas are boiled and minced with a simple spice blend that infuses a gentle, balanced flavor. Finely chopped cilantro, green chile, and red onion add a layer of texture, and pan-frying reinforces the kebab’s delicate structure. The end result is a versatile fried delight that can be slapped on bread, had with rice and curry, or on its own with the subcontinent’s favorite condiment, Maggi Sauce.