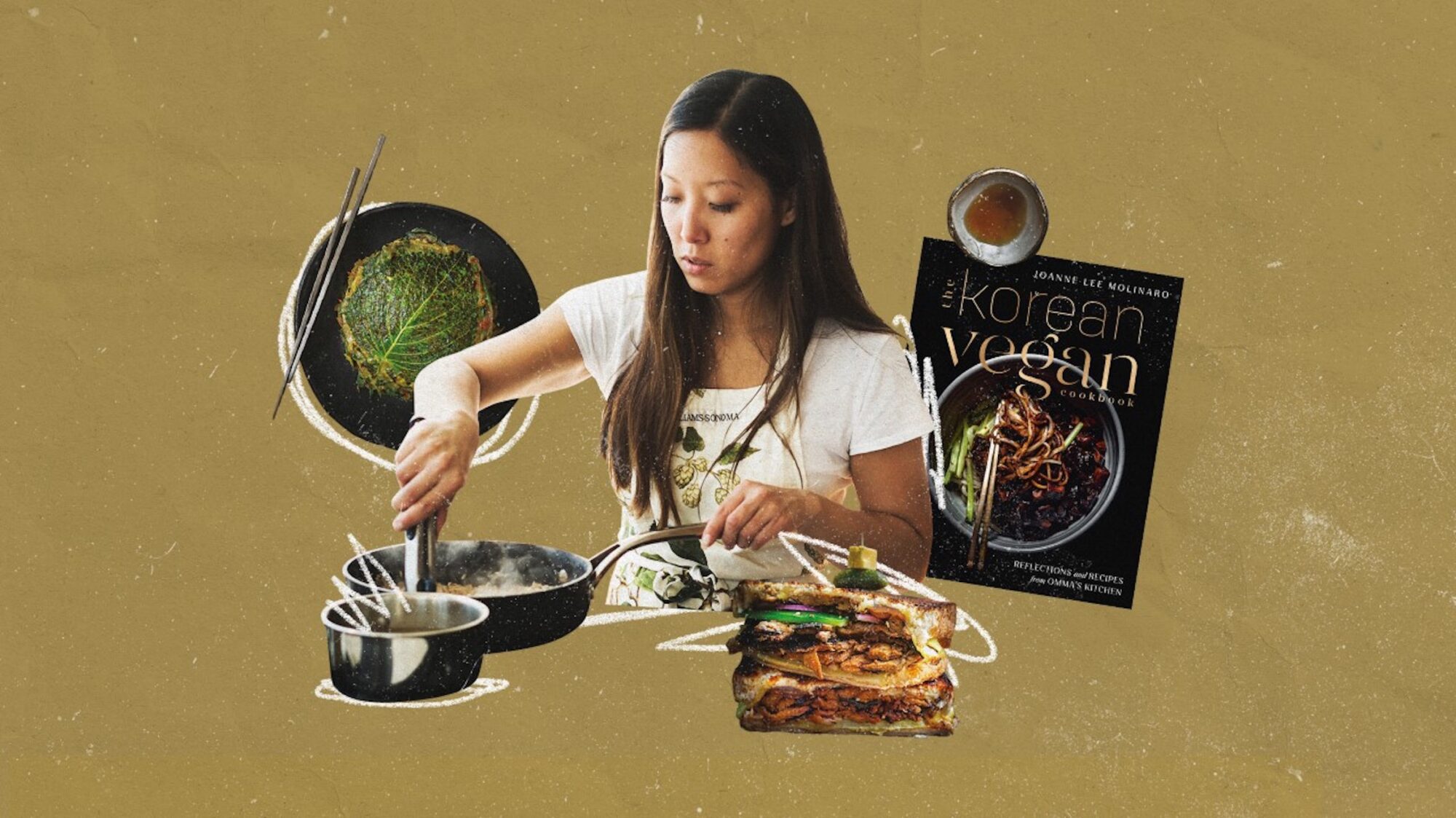 “When I asked my mom, ‘Umma, can you ask them to make it vegan?” She’s like, “Okay, well there’s no word for that,” says Joanne Lee Molinaro, author of one of the fall’s biggest breakout cookbooks, The Korean Vegan, with a strong laugh. We met on Zoom in July, the day the author received her first physical copy of the book, and well before it was released and popped up on the New York Times Bestseller list. I was curious at the time, having written a Korean cookbook with Deuki Hong, about this exact point—the “veganization” of a cuisine that relies so heavily on the ocean and flexes an astonishing ability to grill tender hunks of short ribs and soy sauce kissed brisket to universal love. Korean food, on the surface, doesn’t fit the plant-based paradigm, which is why the sharply written book is such an amazing feat.

Molinaro, a lawyer turned recipe blogger turned TikToker with 2.7 million followers, has changed the perception of Korean home cooking, through shrewd recipe writing and focusing on the vegetable cooking that has played a major role in the Korean diet for generations. And while there is, thankfully, no vegan approximation of seolleongtang, a rich bone broth soup with bits of tripe (“I wasn’t going to go there”), there are many vegan recipes for muchims, kimchi, tangs, jjigaes, and jjims that have home cooks missing little. I really enjoyed meeting Molinaro, as we talk about utilizing fennel, breakthroughs with doenjang, and a meatless version of gamjatang that has my head spinning in the best possible way.

You write about how Korean food is essentially as un-vegan as you could get. So first off, how do you come to that conclusion that Korean food is as “un-vegan” as you could get?
Well, I think it depends on how you look at veganism. In so many ways, I would say 99% of Korean food is not vegan. It’s either got meat or seafood in it. Which makes sense, because Korea is a peninsula. So, it’s historically been a seafood-rich cuisine. The thing is, though, in some ways that makes it so not vegan-friendly, but in other ways, it makes it incredibly vegan-friendly, because all you have to do is remove that one thing, you know, like that 1% that makes it not vegan, and all of a sudden you have a beautifully vegan dish.

And true on the flip-side, Korean cooking is also incredibly plant-centric too…
There’s so many vegetables from the sea or from the earth that make up the Korean diet, but it’s often seasoned with something that’s not vegan. So if you just take that one thing out, then all of a sudden you’ve got a very veg-friendly cuisine.

Yeah, absolutely agree, and I love that you point that out; kimchi jjigae is a great example. If you take out the pork belly or bacon, you’ve got this incredible dish. And I love that you point out that Korea is a peninsula and seafood is important to recognize, that it isn’t just barbecue. How often do you have to face this question of, “isn’t Korean food just barbecue?” I sure have (laughs).
Well, I think that nobody’s ever said it quite that way, but I think the way it’s often been posed is, well, how can you veganize Korean food since so much of it is Korean barbecue? I mean that’s what they associate with Korean food. And again, one of the joys of The Korean Vegan, and writing the cookbook, and showing my recipes, is showing the world that oh my gosh, Korean food is so much more than what you see at a Korean restaurant. That may be the most popular iteration of Korean cuisine, in Western culture, but for Korean-American, or any member of Korean diaspora, or of course a native Korean, they’re going to be interested in sundubu jjigae. They’re going to be interested in ddeokbokki and all the sorts of other things that maybe Americans or other members of Western culture are not familiar with.

Let’s talk about fennel broth. What an exciting wrinkle to bring to the Korean kitchen, especially working with doenjang. It’s smart.
It’s a fennel broth doenjang guk, so you’re using the fermented soybean paste, but instead of using garlic and onion, I replaced it with fennel. And it just provides this wonderful, sweet aroma that really enhances the funk of the doenjang. The doenjang guk is a very humble, modest soup, that is served with almost every meal. It’s really supposed to be a palate cleanser or a palate transitioner if you will. So a lot of times when you eat a heavy barbecue meal, after the meal, you get doenjang guk. And for somebody who’s never been to a Korean restaurant, they’re like, “Wait, now we’re eating soup?”

It’s a little strange, right? But it’s really meant to be a transition between that and perhaps a cold dish, like naengmyeon or something like that. And so the idea here was to create a very soft dish. That’s the way I think of doenjang guk. Very mild and kind of warming, embracing soothing dish. And what the fennel does, is it creates a much milder sort of flavor than say garlic or onion, something that’s in your face. Fennel is supposed to be more of an invitation, like, “Hey, try me out.” I think of it almost like a person. (Laughs)

No, you’re making it a character! I like it.
Yeah, but that’s really what it’s supposed to do, like “Hey, I’m interesting but I’m also soft and comforting.” And that’s really what that doenjang guk is meant to do. It’s just a great little complement to a bowl of rice or something very humble, modest and healthy.

I love that you really focus on muchim. I mean kimchi obviously gets more press (laughs) or whatever! Talk about muchim though, and how you think about muchim because you have a few recipes.
Yeah, so muchim is like—so for people who don’t know what muchim is, it’s almost like dressing. Like a dressed vegetable. It’s not necessarily pickled. It’s more like—I think of a kale salad. You know how kale salad almost always tastes better the next day? After it’s been sitting, and kind of disintegrating in your dressing? That’s kind of the basis of muchim, is you take some kind of root vegetable, green or some other kind of sturdy vegetable, and then you add some type of dressing, and in Korea it’s usually kind of a soy-based dressing or sauce.

And then you let it sit in that sauce, sometimes for weeks. And you get almost a braising effect. Slightly pickling effect. And so, the great thing about muchim is it lasts for a really long time. And it is one of the backbones of banchan. Banchan is this plethora of quote “side dishes or garnishes” that come with every Korean meal. And the idea is a lot of them are composed of muchim because they last for so long. They’re salted, they’re cured, they’re pickled, however you want to do it.

And you can cook muchim too, right? You can just put it in a saute pan if you want.
Yeah! Definitely. You definitely can. I boiled the kale muchim. You can boil it, you can saute it, but the idea is simply that it sits in that sauce for several days, and it really just absorbs those flavors.

Gamjatang, a pork neck, potato, and perilla seed stew, is my favorite Korean dish by far. It’s like—I’ve had it lots of places in different ways. But you know, the pork jowl, the neck is pretty fundamental. But, I read your headnote, and I’m like, maybe it’s not! Maybe it’s not! So talk me through your vegan gamjatang, which I think is pretty cool.
I remember I loved eating this dish with this pork thing, and potatoes. And then I see the name on the menu, and I’m like…“Gamjatang?! The potato has almost nothing to do with the dish! It’s the pork and the greens and the flavor of the sauce and all that stuff, and that’s the best part of the soup.” And I remember when I first saw gamjatang on the menu, I got really excited, because I’m like, “Oh my gosh, I love potatoes. This is a soup that’s supposed to be about potatoes.” And then I get the soup and I’m like no, it’s that other dish, which I also love.

So it was sort of a weird experience for me. So when I was trying to veganize it, I thought, “Why not just embrace the name of the soup?” Which is potato—you know, tang is sort of like a hot pot. Potato hot pot. And just really make it all about the potato. And I really wondered—is it going to taste as good without the pork? And sure enough, again, which is often the case with Korean cuisine, the flavors of the gochugaru, the soy sauce, the garlic, the beautiful wild sesame seeds—all of those things—they don’t make you miss the pork at all. And now, you have a dish that truly celebrates its namesake, the potato. 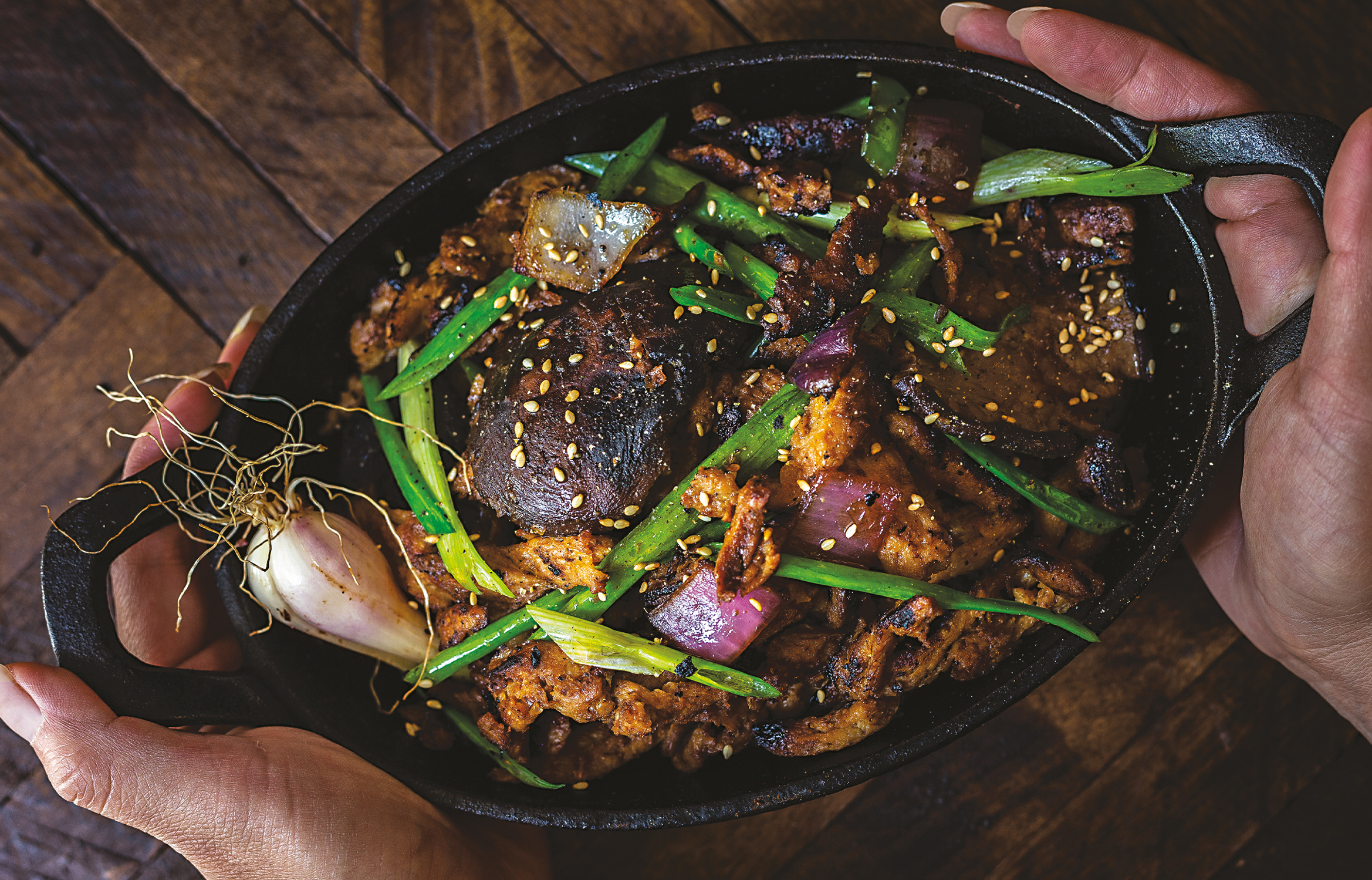 THREE GREAT RECIPES TO COOK FROM THE KOREAN VEGAN