Get a free recipe
Subscribe
May We Reintroduce the King of Cocktails
By: Chloe Frechette Photos: Eric Medsker 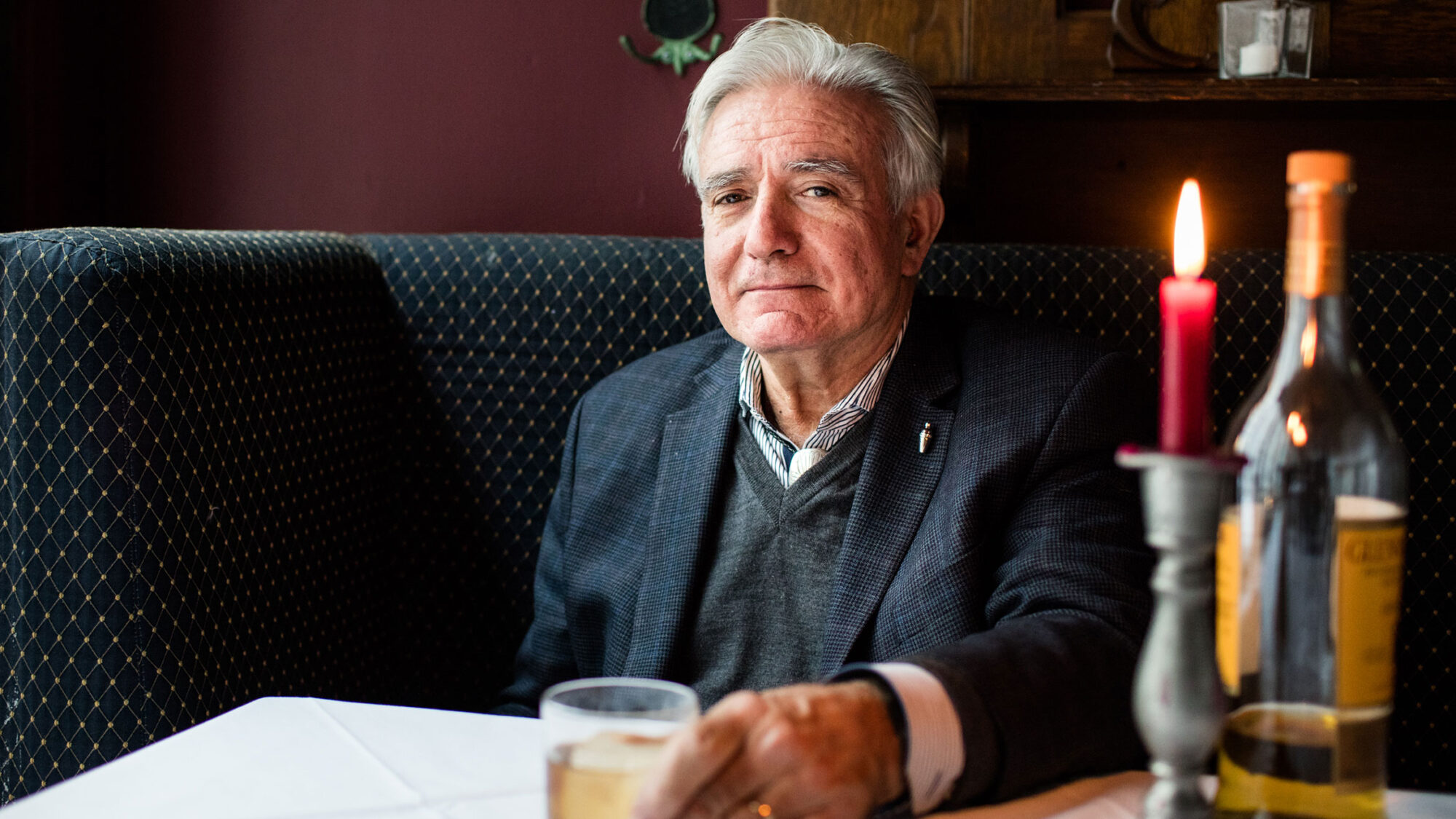 Dale DeGroff is back with an update of his drink-world-shifting The Craft of the Cocktail.

An hour into our multi-hour telephone conversation, Dale DeGroff pauses mid-sentence with a declaration: “It’s been the most serendipitous career,” he sighed into the receiver from his home in Connecticut, several blocks from the Rhode Island border. It’s a statement that reveals a profound modesty for a bartender with a James Beard Lifetime Achievement Award under his belt, and who’s better known by the moniker “King Cocktail” after more than 30 years in the business.

Throughout our talk last week, DeGroff is quick to credit his success to individuals and circumstances outside of his control, almost as if it were all a matter of luck. These include collaborating with Joe Baum, the famed restaurateur and DeGroff’s mentor with whom he worked at Charley O’s, Windows on the World, and Rainbow Room, as well as operating in a different era (“There were no HR departments back then—inevitably, they keep the right person out of the job when it comes to the bar business, because character is a liability.”) Yet in speaking with DeGroff, and knowing his deep influence over the decades, it’s clear that the man they call the King of Cocktails did not land the throne simply through a fortunate roll of the dice.

You don’t have to look hard to see the influence of DeGroff’s own achievements in the modern cocktail world, even 20 years since he’s retired from working behind a bar. So many of today’s celebrated trends, from the nonalcoholic drinks movement to culinary cocktails, which borrow ingredients and methodology from the kitchen, blurring the line between chef and bartender, owe a certain credit to DeGroff. After all, he was studying cocktails and innovating the way customers drank well before the term “mixology” was resurrected (and eventually died).

At New York’s famed Rainbow Room, where DeGroff helmed the bar from 1987 to 1999, his opening menu featured a selection of nonalcoholic cocktails at a time when few establishments had menus at all, let alone a dedicated NA section. When the 34 bartenders he hired arrived for their first day of training, DeGroff took them on a tour of the Rainbow Room’s kitchens, noting the tools each cook brought with them, and encouraging the bartenders to invest in their own kits, to take a knife skills class and a saucier class, and to think of themselves in a more culinary way—as bar chefs. But, most important, he resurrected the touchstones of the Golden Age of cocktails—the dry martini, the sidecar, the Sazerac—bringing them back into public consciousness, and restoring dignity to drinking along the way.

The publication of The New Craft of the Cocktail is just his latest achievement. A revised edition of The Craft of the Cocktail, published in 2002, which taught a generation of bartenders how to properly make the classics, the book, which features 100 new recipes, is not only a reflection of how much the cocktail world has evolved in nearly two decades, it’s a testament to DeGroff’s enduring influence on that world.

I caught up with DeGroff to get his take on where the industry is heading, what we have to look forward to, and, of course, his favorite celebrity encounters.

Did you overlap with Anthony Bourdain at Rainbow Room?
Anthony had left, and the next time I saw him was when he opened the [Les Halles] steakhouse on Park Avenue South. We had created the Red Meat Club [a group of restaurateurs and bartenders who dined together once a month], and we all decided to go in and bust his balls. This was before Anthony had any TV stuff or any of that. We usually didn’t go in the first week that a restaurant was open, but we decided to do that. And it pissed him off! Anthony was not at all embarrassed about letting you know when he was pissed off. “You couldn’t give me more than a week?” he said.

As you were working on The New Craft of the Cocktail, what struck you about how cocktails had changed or evolved since publishing the first edition in 2002?
If I look over that first menu that I did [at Rainbow Room], it was [classic drinks like] the 20th Century, the South Side, the Stork Club, the sidecar, the Sazerac, Planter’s Punch, Pink Lady, Old Fashioned, Negroni—this is 1987—Moscow mule, Martini, margarita, Manhattan, Jack Rose, Floradora, Flamingo, Colony, coffee cocktail, Bronx, Between the Sheets, Americano, Algonquin—not a single original cocktail. Because that’s not what Joe [Baum] was interested in. He was interested in bringing an experience that the guests hadn’t had in a long, long time. That’s why it was so popular, I think. But, you know, the stark difference between then and now is that, because these cocktails are [currently] back in currency, the bartenders of the new millennium now have the freedom and the pleasure of taking these cocktails and running with them. As Gaz Regan explained in his book, they come from families, and now we can start figuring out what these formulas, or what these basic recipes, can lead us to. And that’s what’s happening.

Is there anything that’s evolved that you’re not so excited about, or that you think is sort of moving in not the right direction?
I don’t know how involved you are in the whole culinary revolution of the last 35 years or even more . . . [but] nouvelle cuisine was kind of misunderstood when it first came to the United States. I remember because I went to some of those dinners where there were three sea scallops in the middle of a 19-inch plate and 12 colored dots around it, which was the whole entrée. It was a little awkward!

What I’m getting at is, in the beginning of the craft cocktail movement, it was that same kind of awkwardness, where bartenders went way overboard in terms of, you know, just immersing themselves in flavor and ingredients to the point where, in many cases, they ended up with just mud. There were too many ingredients, and they weren’t using them properly, because they didn’t have the training to do it. They were so excited to have, you know, this idea of the culinary cocktail, and using unique techniques and spices and herbs and botanicals and everything, and making your own syrups, and blah, blah, blah.

In the case of the bar, they built these bars that had, from one end of the bar to the other, bottles—all the way across the front of the bar, putting up this wall between themselves and the guests, and they had their heads down and their tweezers, and, you know, it became a moment when people forgot what bars were. But it was a short period of time. And [then] some of the craft [cocktail] bars started doing fun things like putting in, you know, pinball machines and pool tables and stuff that people like to do. I love that when that happened in that space, you know, that people remembered that it was supposed to be fun.

If you were to envision writing “The New New Craft of the Cocktail” 20 years from now, what do you imagine we’d see more (or less) of? Do you think the nonalcoholic movement will continue to be influential?
Probably. My menu at the Rainbow Room started with nonalcoholic cocktails. It was a major part of the menu—we had this long menu designed by Milton Glaser with these beautiful graphics, and at the bottom, within the cocktails, you had the nonalcoholic. They started off at around $4, ended up around the $8 range. It was hugely popular on our menu from day one, because we were a destination. We were a place where families went to celebrate. People were in their tuxedos and their gowns, you know, the whole family, whether you drank or not. I had a lime rickey, which I never took off. It was a drinking man’s nonalcoholic drink—club soda with fresh lime juice and a little bit of simple and bitters, because they’re really aromatic. The bitters really played a part in the nonalcoholic, in the sense that it made you feel like you were drinking.

Did anyone else have as extensive a nonalcoholic menu as you?
No one even had a menu, Chloe. I’m not kidding. I went around looking for menus to see what other people were doing, and the places that had menus were the Plaza, the Waldorf, the King Cole—and they had them mostly for Europeans. I mean, they didn’t show them to the American audience. The only place you saw drinks on the menu was in the brunch menu of almost every restaurant in the city. You would find, of course, the three classic brunch drinks, you know, the Bloody Mary, the Bellini, or the champagne cocktail. So finding a menu of alcoholic cocktails was impossible—let alone nonalcoholic.

You write about New York City roaring back to life around 2003, after more than a year of trauma and recovery following the 9/11 attack, with bars and restaurants returning to business and then some. Do you envision a similar-looking recovery in the months after a COVID-19 vaccine is introduced, or do you think the landscape will be permanently altered?
Well, I’ll say what I do every time I get asked this question, by saying that, you know, since the caveman, we have gathered around alcoholic beverages. Ever since we figured out that you could do more with grain than make bread, alcoholic beverages have been a part of our celebrations, our mourning, so I don’t think that that’s ever going to go away.

Can you tell me your favorite celebrity story from when you worked at Rainbow Room?
I got lots of celebrities at the tables in the lounge, you know, but there were only 16 stools at the bar, and the only one who was a regular was Tom Brokaw—and Tom drank beer! Brilliante Cocktail
A “morning after” Negroni variation that swaps in brewed coffee for Campari. DeGroff grinds the coffee beans with fennel seeds for the slightly vegetal note typically provided by the Campari.

Gin Tonic Al Fresco
A higher-octane version of a similar drink created for the restaurant Morandi in New York, this simple G&T riff adds an extra bitter kick by way of Cynar, an amaro flavored with artichoke leaves.

Whiskey Smash
Created for Bobby Flay’s Bar Americain in 2005, this whiskey smash recipe calls for muddling the fruit and mint together before shaking the cocktail for greater flavor extraction.

We recently talked about the world of nonalcoholic cocktails with Julia Bainbridge, the author of Good Drinks.

Hey, maybe check out the recent book by the author of this interview. Easy Tiki features 60 recipes inspired by the history of tiki, as well as the modern revival that’s putting a fresh spin on tropical drinks.

Did you preorder Ottolenghi Flavor, the latest from Yotam Ottolenghi and Ixta Belfrage? If so, your receipt could earn you some pretty cool bonus recipes.

Here are a couple of great fall cookbooks roundups from Eater and Chowhound.

Chloe Frechette is the senior editor at PUNCH.