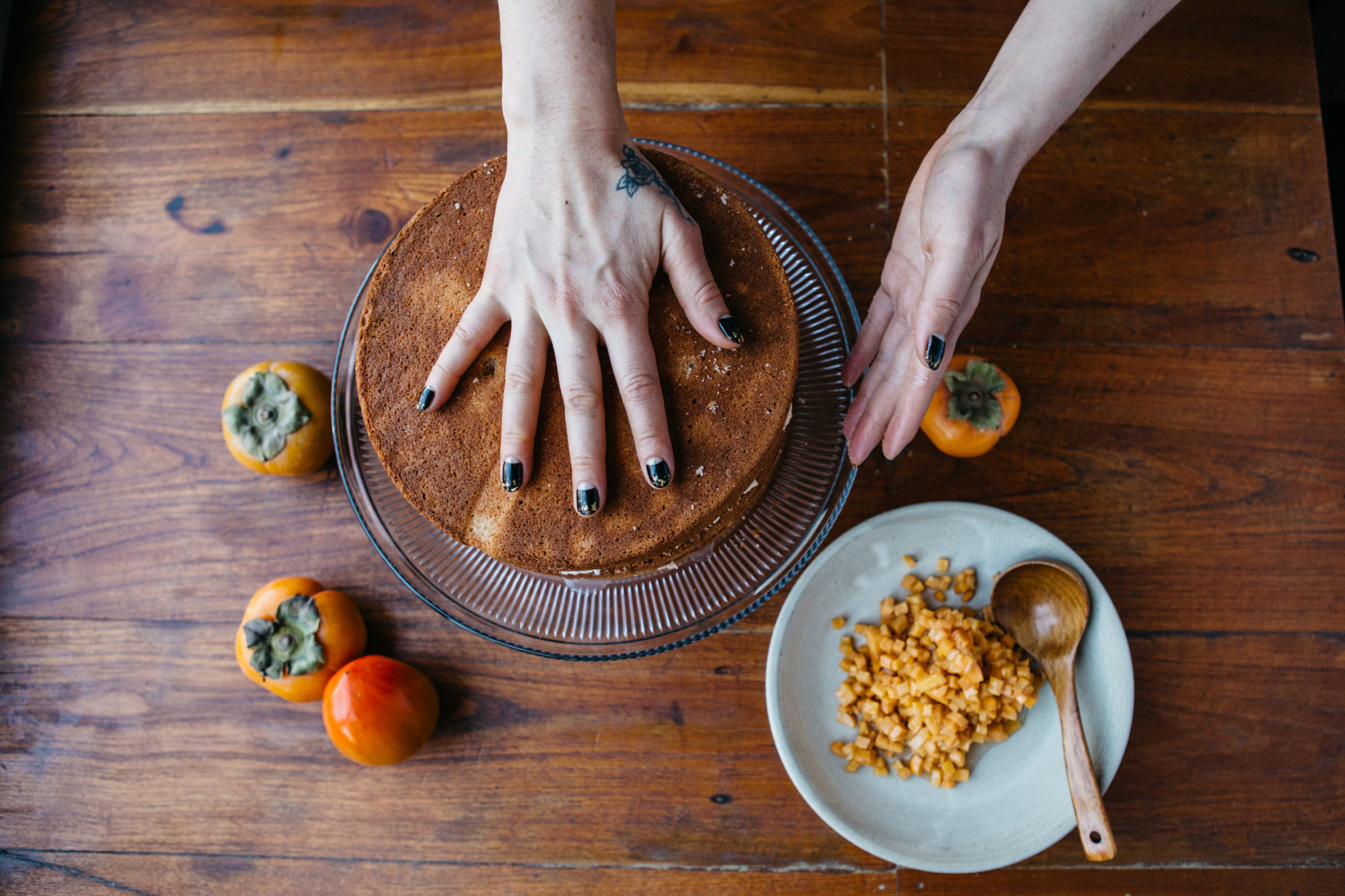 When you get them in season, persimmons are a perfect ingredient for both folklore and layer cakes.

The bright orange globe of the persimmon is bitter, astringent, and thoroughly unpleasant if you approach it before it’s ready, but when you catch it at the right time, it’s fragrant, lovely, and delicious. Perhaps that’s why I love them: We have so much in common.

When you grow up in Northern California, you see persimmon trees everywhere, especially when you get a couple hours outside of San Francisco and the wineries and roadside farms are littered with them. There is something so strikingly beautiful about the orange orbs that hang on the dark branches long after all the leaves have succumbed to autumn. Like a Christmas tree out of a gothic fairy tale. When I was a kid, my mom brought home huge bags of Fuyu persimmons from the farmers’ market in the fall, and I would eagerly grab them out of her basket, peel them, and crunch them like apples. I loved their sweet, colorful, cinnamon-spiced taste so much that I ate them until I made myself sick. I associate persimmons deeply with my childhood, both because I ate them and because they have a bit of folklore surrounding them. In Japan there is a fairy tale about a monkey, a crab, and a persimmon tree. A monkey trades a crab a persimmon seed for her rice ball (he thinks he’s being awfully clever). When the crab’s seed turns into a big, beautiful tree that bears lovely ripe persimmons, the monkey returns to steal them all from the poor crab. When she tries to stop him, he throws unripe fruit at her and leaves her for dead. The crab’s children team up with an egg, a piece of kelp, a bee, and an usu (the mortar and pestle used to make mochi) to teach the crab a lesson. Long story short, the fairy tale ends with the monkey’s comeuppance via exploding egg, stinging bee, slippery kelp, and death by falling usu. I’m not entirely sure what the moral of this story is, except that persimmons are highly coveted and that you should never mess with the offspring of a crab.

On the other hand, it’s produce that I believe is underappreciated. Perhaps their small window of seasonality/edibility (generally from October to February) makes them a hit-or-miss option for many people. There are two types of persimmons: Fuyus, which are squat, thin-skinned, and eaten when they are still crunchy, and Hachiyaa, which are larger, pointed at the bottom, and thicker-skinned and absolutely must be eaten when the flesh inside has become soft and jelly-like. There are few things more unpleasant than an unripe Hachiya. Its astringency will immediately make your tongue feel like it’s covered in a hideous orange shag carpet. Unripe Hachiya persimmons do have one use, which is to make hoshigaki, the very old-school Japanese-style dried persimmon that you have probably seen on a lot of chefs’ Instagrams during the fall months. To be fair, it is a rather aesthetically pleasing drying process. The unripe persimmons are peeled and tied to bamboo poles, which are hung outside in the cool, fragrant, clean air. Or, if you’re like me and at one point had no choice but to make them in a kitchen in the Mission district of San Francisco, you hang them up inside and as far away from outside as possible.

However, just because you’ve managed to peel them and tie them with butchers’ twine onto a pole does not mean you’ve made hoshigaki. If you leave them like this you’ll just get a dried persimmon, which is a common mistake. The persimmons need a daily massage while they are hanging, which brings the natural sugars to the surface so the fruit becomes covered in a light dusting of white bloom. You must be very careful to apply the correct amount of pressure and care to each fruit. If you do this, you’ll be rewarded with a beautiful orange confection dusted white with the texture of a gummy bear. I have used persimmons in many of my desserts, including ice creams, pudding cakes, semifreddos, pickles, and pate de fruit. One of my favorite desserts I made was when I was the pastry chef at Lazy Bear in San Francisco. I paired persimmon with malt, chocolate, and root beer spices. The warm spices of the sassafras and sarsaparilla brought out the natural spiciness of the persimmon, and the malt and chocolate added bitter earthiness to ground such a floral and heady fruit. I have used these same flavors to make a layer cake that I think would be lovely for a fall dinner party or just as a snack.