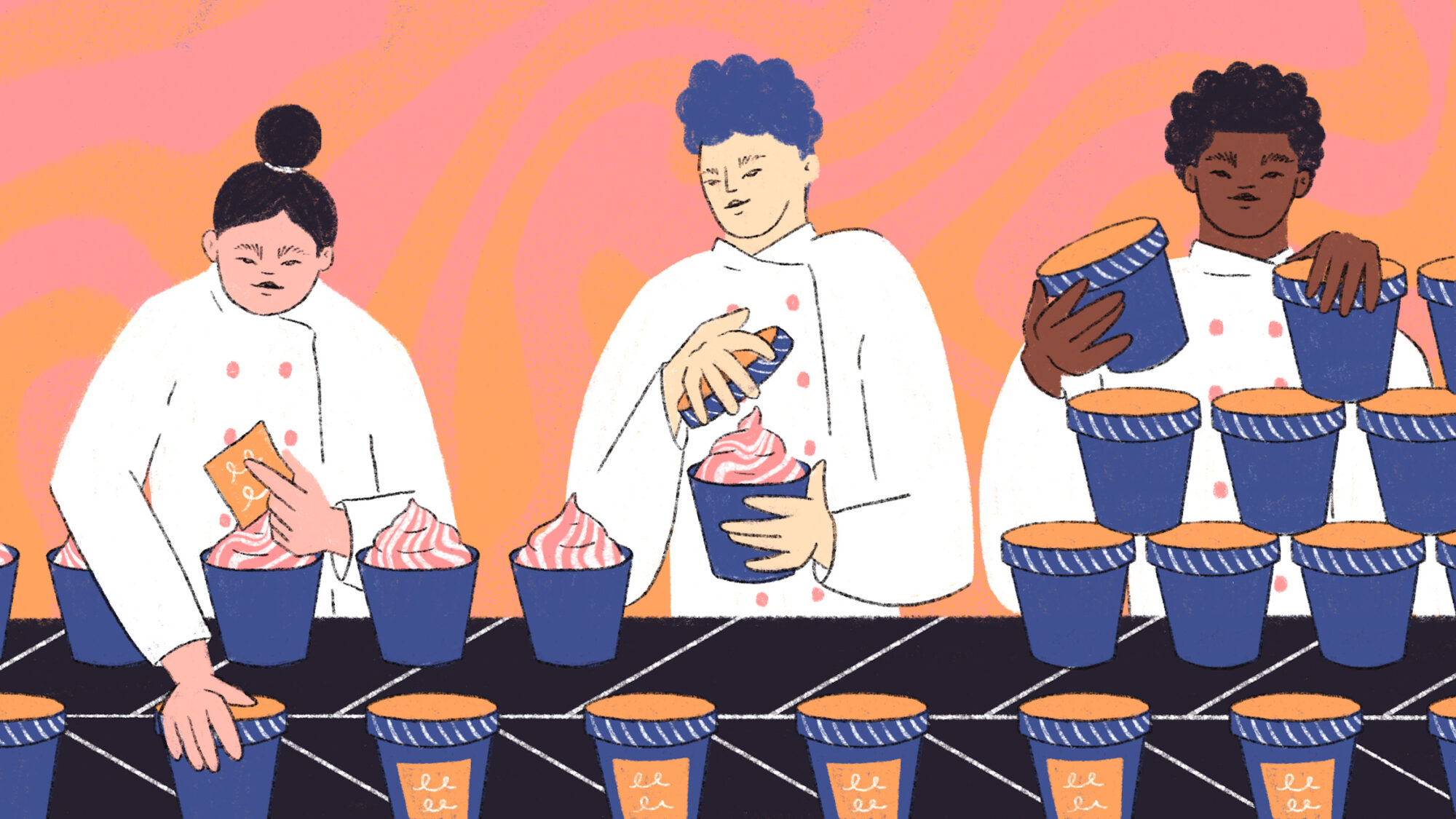 A growing number of bakeries, restaurants, and ice cream companies are leading the charge to employ the formerly incarcerated.

“It’s the same work I was used to in prison, but the difference is that, in prison, I was working for 10 cents a day.” Alvin Wilson is a 66-year-old baker. Living in New York’s Westchester County with his sister, he’s spent the last seven years mixing brownie batter ingredients and packing the baked result at Greyston Bakery, the organization whose brownies can be found in your favorite scoop of Ben & Jerry’s, from Chocolate Fudge Brownie to Brownie Batter Core. Greyston was founded in 1982 as an “incubator for open hiring,” says the company’s CEO, Joseph Kenner. Open hiring, second-chance employment, and “Ban the Box” activism are company practices that both eliminate background checks and actively recruit formerly incarcerated individuals, who are often up against stigma and discrimination while searching for jobs.

According to the American Civil Liberties Union, 75 percent of returning citizens are still unemployed a year after their release, and a 2021 report by the US Chamber of Commerce says that having a criminal record reduces employment callback rates by 50 percent for white men and 65 percent for Black men. “A lot of doors are closed for formerly incarcerated people such as myself,” shares Mickey Wilkerson, who, after spending only three weeks incarcerated on New York’s Rikers Island, had to put months of initiative (and patience) into getting her driver’s license authorized—much less establishing full-time employment. The irony in Wilkerson’s story, and that of many others, is what Alvin Wilson alludes to when mentioning his horrifying paycheck while behind bars: big-time food corporations have been leaning on incarcerated labor for decades as part of their supply chain. Yet once released, these same individuals are labeled as anything from a threat to the work environment to an unreliable employee, based on archaic, racist stereotypes.

The argument for open or second-chance hiring is first and foremost for companies to respond to this pool of potential workers, made up of Wilkerson and her compatriots, which is too often overlooked. Kenner, Greyston’s CEO, argues that, particularly for an industry with razor-thin margins—which is also currently plagued with one of the greatest labor crunches in a generation—business can thrive when you incorporate open hiring. “Our partners are seeing their time to hire go from an average of 30 days to five or seven,” he shares. “Right off the bat, the time, money, and resources that go into excluding people through background checks, résumé requirements, and interviews are reallocated to better wages and keeping people.”

“Hospitality historically has had its doors open, because there’s no need for the traditional trajectory that comes with other professional careers,” says Jordyn Lexton, founder of Drive Change, a nonprofit known for programs that train formerly incarcerated youth for restaurant jobs. Lexton got the idea for Drive Change following their role as an educator on Rikers Island, the home of New York City’s main jail complex. There, Lexton observed the abuses and often-dangerous living conditions for which the prison is notorious, but they also gained access to two vocational programs held inside: a barber shop and a culinary arts class.

“The class was a place where, despite all of the trauma and pain, the young people were happy to be,” Lexton shares. As an introductory class, students would learn how to make sauces and stocks while observing the differences between braising, sautéing, and roasting—and were even pushed to experiment with fresh pasta and pastries. Lexton emphasizes that the food activity reminded these incarcerated residents of their “humanity, capacity, creativity, productivity, teamwork, resilience—you name it—[and] they could feel like, ‘Hey, I can prepare this thing and share it with another person.’” The program tapped into residents’ love of food while building real-life skills that could potentially be converted into a steady income after prison.

“We saw food service as this moment for natural engagement,” Lexton shares of the beginning stages for Drive Change, which crystallized in the form of a “farm-to-truck” food truck. Operated entirely by employees recently released from Rikers, the truck—with staple dishes like maple grilled cheese and broccoli rabe Caesar salad served across New York City—became a nutritional and educational channel for the formerly incarcerated returning to the New York community. “While people would wait for food, our employees would strike up a conversation, like, ‘Hey, did you know that average bail is $500, and a lot of people can’t afford that?’”

“Hospitality historically has had its doors open.”

Since its founding, Drive Change has evolved from primarily training young adults coming home from prison to offering expanded training for the food business side, focusing on how to hire people impacted by the system. Completing their program, Hospitality for Social Justice, is a prerequisite for businesses to hire any of their formerly incarcerated fellows. Because, according to Drive Change’s interim executive director, Kim DiPalo, “many formerly incarcerated folks spend two months training with us, then go into these restaurants and continue to be marginalized.”

Dupree Wilson, now a kitchen assistant at Drive Change, can attest to that. After graduating from Drive Change’s fellow program, he worked in a few kitchens around New York. “If I made a mistake, people wouldn’t want to tell me directly,” Dupree shares. “It’s not like I’m going to burn the building down—but they acted like I was the most dangerous [person] in the restaurant.”

Dupree also adds that, even when he was supported, the racist undertones that came with being formerly incarcerated were at times debilitating. When discussing his time working as a line cook at a popular bistro in north Brooklyn, he says that he had coworkers who would consistently ask him about the latest rap album (that he not only didn’t follow but hadn’t mentioned). He also observed that his employers seemed to feel like they were “saving him,” and he blames these behaviors on society’s inability to humanize folks coming from prison. “The story of my career [after prison] has been watching people uncomfortably try to make me feel comfortable.”

Through Drive Change’s business program, other restaurants and food entities are acknowledging that, while employees with criminal records might require more up-front investment and mentorship, they’re an asset to a business in more ways than one. Hallie Meyer, owner of New York City’s Caffe Panna and trainee of Drive Change’s Hospitality for Social Justice, paints a picture of commitment to equitable hiring that has opened up new doors for her gelateria. From splitting tips among all employees—as opposed to the traditional front-of-house model—to giving all team members a shot at the menu by experimenting with new gelato flavors, Meyer has built a team whose energy is shared with customers by osmosis. The model really works, and, as Lexton emphasizes, “investing in entry-level marginalized talent creates an environment that is healthier for everyone.”

Between March and June of this year, the United States has seen an 8 percent decrease in the national prison population; in tandem, the societal perception surrounding incarceration is becoming less intertwined with stereotypes of “criminals.” That is to say, the state of mass incarceration in this country is shifting—whether in response to a heightened cultural consciousness following the murder of George Floyd, the legalization of cannabis in many states, more acute awareness of mental health treatment alternatives, or a combination of all of the above. Simultaneously, restaurants are in desperate need of labor in the era of COVID-19. Companies committed to hiring people regardless of their background—particularly formerly incarcerated individuals—are responding to an economic and moral need.

“Investing in entry-level marginalized talent creates an environment that is healthier for everyone.”

Be it unconscious or intentional, the food industry is taking on a role that informs the changing state of incarceration. Just by opening their doors and employing folks, restaurants and food companies can help reduce our country’s recidivism rate (employment is one of the number-one factors when it comes to remaining out of or going back into prison). Yet the question remains: Is the industry prepared to take on this responsibility? Many restaurants and food e-commerce brands still run background checks—from McDonald’s to Applebee’s to one of America’s fastest-growing employers, Amazon. Even for places that do hire returning citizens, there is a gap in on-the-job treatment.

“My job with this next cohort,” shares Dupree of the next class of Drive Change trainees, “is to remind these people that it’s not them. I’m coming from the same place they’re coming from, and I’ve seen the weird experiences they’re going to see, that are incredibly racist or awkward. I’m here to tell people like me that the way they are treated is not on them.”

Lexton and the Drive Change team are not convinced that restaurants exclusively are the right industry “for sustainable, long-term support.” They have their sights set on expanding to local farms, food nonprofits, and even food tech as the next wave of second chances. According to DiPalo, the team wants to target jobs “that don’t have the extreme fluctuation in business and in grind of work—[such as] warehouse roles, administrative roles in food businesses like God’s Love We Deliver or City Harvest, farming roles, and opportunities connected to food that give fellows more options beyond the kitchen.”

And for Greyston’s Alvin Wilson, the main priority is less the industry itself and more getting the word out to work release facilities in New York and elsewhere. He hopes to be part of that outreach: “If I can pass the word on, I know I did my part.”

Abigail Glasgow is a freelance reporter whose writing and interests include prison reform and politics, gender and sexuality sociology, and design profiles. Originally from Richmond, Virginia, Abigail now lives in Brooklyn with her partner and two cats, Richard and Macy.