Get a free recipe
Subscribe
It’s Expensive, Bland, and Eaten All Over Southeast Asia
By: Austin Bush 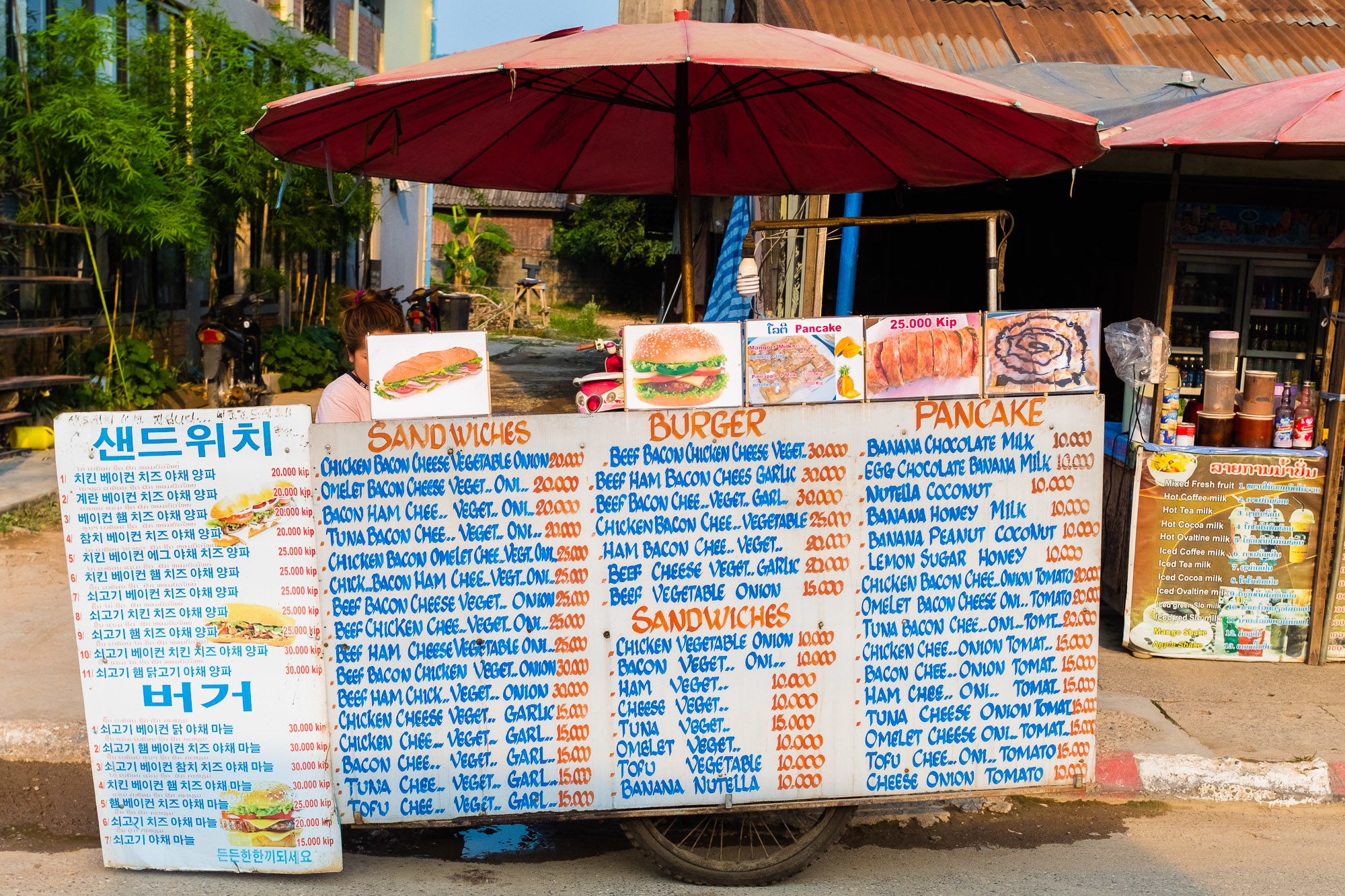 Hello [gives traditional greeting gesture]! Welcome to [insert Southeast Asian destination popular among budget-conscious tourists]! May I interest you in our local cuisine? We call this dish “banana pancake.” Ah, here is another local favorite—just like my grandmother used to make. We call this one “green/red/yellow curry with beef/chicken/pork/vegetarian (not spicy).”

What I, via my fantasy tour guide, want to introduce you to is a very real cuisine. One that’s found in tourist destinations across the developing world but also in the United States. One that is comforting and customizable, unambitious, and inoffensive. One with both local and foreign influences that is actually neither local nor foreign. It’s a cuisine I like to call backpacker food.

If you’ve traveled in Southeast Asia, you’ve undoubtedly encountered it. Served at guesthouses at Angkor Wat, beach resorts on Indonesian islands, night markets in Laos, and food stalls on Bangkok’s Khao San Road, backpacker food can be hard to avoid. In places where locals don’t have the money to eat out, it can even dominate the local cuisine. Yet after 20 years of living and traveling in Southeast Asia, I’ve only recently come to realize how utterly specific it is. The most common manifestation of backpacker food is its tweaked facsimile of the local cuisine. In Thailand, where I live, this often means neutered stir-fries, gloopy fried noodles, and stripped-down abstractions of curry dishes (known sometimes as “stoplight” curries—green, yellow and red).

In these dishes, local ingredients such as eggplant or bamboo are avoided, and vaguely Western fillers such as carrots, broccoli, potatoes, and tomatoes do the heavy lifting. Fresh herbs are often replaced by processed seasonings. “Choose your own protein” dishes dominate the menu. Vegetarian options are standard. Use of sugar is liberal, and spice levels are explicit and gradated. And more often than not, dishes are portioned for individuals, rather than for sharing, which is the norm in Southeast Asia. In these respects, backpacker food has a lot in common with the food that’s probably being served at your corner Thai shop at home in Bridgeport right now.

Backpacker food also branches out beyond the template of local foods, albeit with sometimes abysmal results. In Southeast Asia, one of the most common examples is, weird as it sounds, Israeli cuisine (possibly because of the large number of Israelis who travel during the gap year before they begin college or army service). The mild, vegetarian-friendly aspects of the cuisine also appeal to just about any Western visitor seeking culinary comfort. I was recently in Vang Vieng, a backpacker destination in rural Laos, where several restaurants advertised Israeli dishes. But the “falafel” turned out to be potato croquettes, and the “hummus” a flavorless paste that almost certainly did not include chickpeas or tahini. If backpacker food has an overriding vibe, it’s one of safety, an ethos most apparent at breakfast, the meal that makes the least effort to draw from local inspiration. The most ubiquitous example of this is that budget-hotel standard, “American breakfast.” A platter of eggs fried in oil, tiny fried hot dogs, slices of luncheon ham, thin slices of sweet white bread, a mug of instant coffee, and a glass of fluorescent “orange juice”; this meal may, as a whole, look approximately American, but it is almost certainly not how you would have started your day back on the farm in Idaho.

Backpacker food may be easy to identify and describe, but why does it exist, especially when one of the main appeals of travel is the opportunity to experience new things? The gut reaction is to blame the visitors—unadventurous, paranoid bores who, at some point, showed locals how to mix batter and flip a pancake to their liking.

But it also may come down to some well-meaning, but overzealous, hospitality on the part of business owners. I speak fluent Thai, but as a white guy in Southeast Asia, I still struggle with getting a dish seasoned or served the way it’s supposed to be. Just yesterday, in Bangkok, I was served Chinese-style noodles on a plate, with a spoon and fork. I think the restaurant was being accommodating, but this actually made the dish more difficult to eat. Restaurateurs and vendors are also, of course, motivated by money. Backpacker food tends to be more expensive than the local food, and the sheer number of people selling it (and buying it) suggests that, as an enterprise, it is lucrative. It’s not uncommon that several restaurants in the same town, hoping to get a piece of the action, will have identical menus.

To be absolutely clear, I don’t mean that they sell the same repertoire of dishes, but rather that their menus include the exact same misspellings and photos, ostensibly lifted from the place that first made money selling the dishes. (In Vang Vieng, at some point, somebody must have raked it in selling “Porkor Kebab,” and now this dish—whatever it is—is available across town.) I’d also argue that although we in the West tend to perceive Southeast Asian cooks as working from ancient, unchanged recipes, the people of this region have an extremely liberal, practical approach to making food. The cuisine adapts, evolves, and fuses as much as any other cuisine in the world, and I can only predict that in 30 years, villagers in Bali will be sitting down to a dinner of that weird hummus, perhaps enlivened with a dollop of sambal.

Foreign food can be intimidating. Especially in Southeast Asia, where the ingredients are utterly unfamiliar and the language gap massive. And not all of us travel to explore; many come to Southeast Asia with little more than the intention to bake on a beach. So it’s not surprising that a cuisine has emerged to accommodate this, although I find it astonishing that nowadays, there’s little difference between the dishes served at a Thai restaurant in Phuket and one in Poughkeepsie. Perhaps backpacker food is best summed up by that annoying T-shirt sold at just about every night market in Southeast Asia: “Same Same But Different.”