Get a free recipe
Subscribe
Eric Ripert Is Not Afraid of Frozen Peas
By: Matt Rodbard 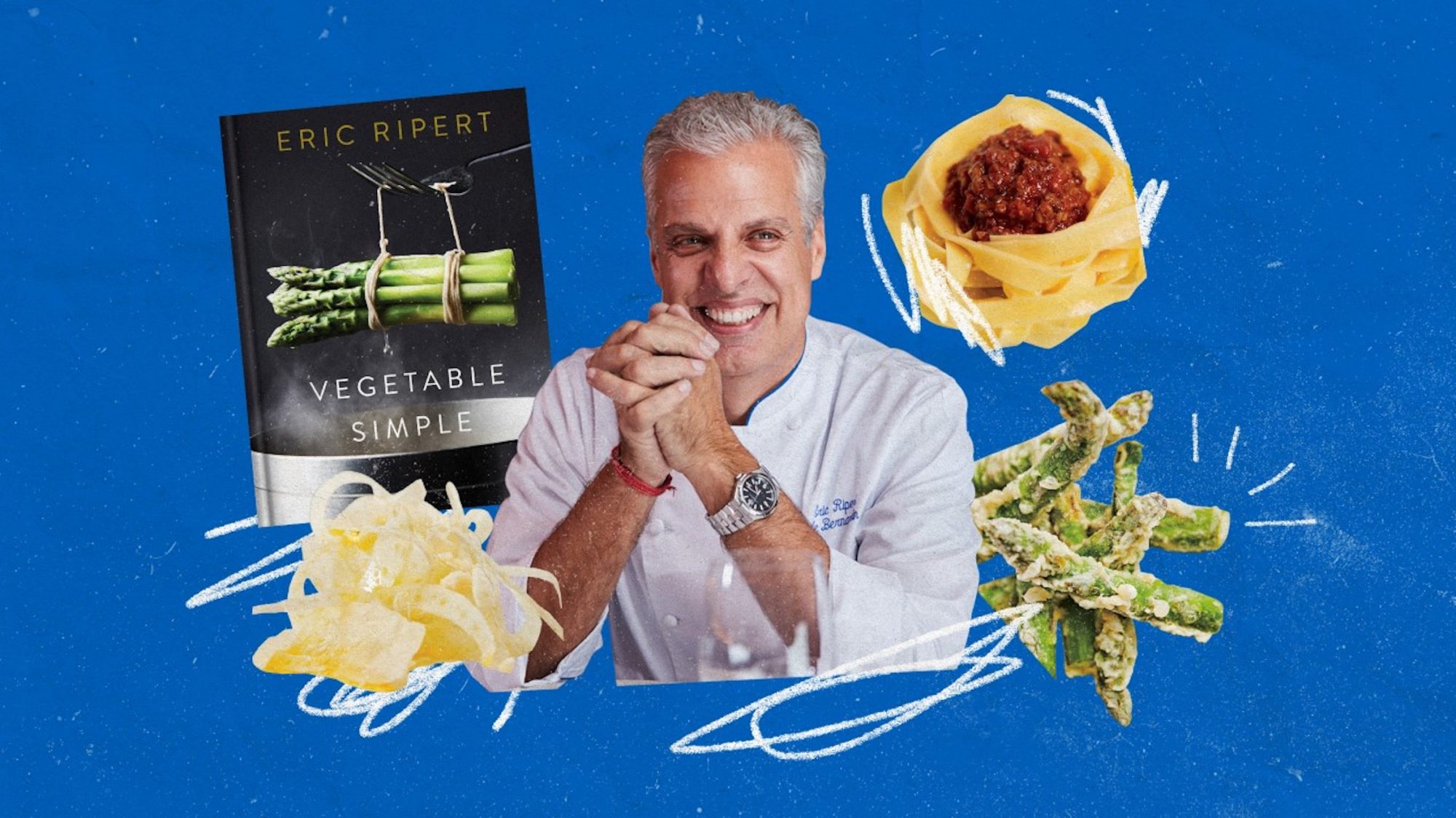 The NYC chef has given vegetables the book they deserve, full of restaurant precision translated for home kitchen practicality.

I’ve had the pleasure of getting to know Le Bernardin chef and cookbook author Eric Ripert over the years. This began with our shared love of Korean food and culture—we spent a week in Korea on a cultural exchange in 2014 that had us visiting temples, touring gochujang farms, and eating the most exquisite seafood—grilled and raw and still crawling. I also found out then, as I’ve recently rediscovered with his latest book, Vegetable Simple, that the dude is a loyal servant of the vegetable kingdom. He can talk mushrooms for hours. He prizes asparagus—but only in the spring—and not only the white ones from France. He forages for fun, not seeking a television camera for his moment with wild bushes and ferns. Back then, we talked about his need to write a vegetable cookbook, which seemed nice but maybe a little narrow for a guy with so much to say. (Check out his must-read memoir, 32 Yolks, for some graphic stories of life in French kitchens.)

But vegetables it was for Ripert’s next cookbook, and when we recently caught up in April, a couple weeks before Vegetable Simple hit the New York Times Best Seller list (note: people love Eric Ripert, and vegetables, too), it was easy to slip back into a leisurely conversation about the return of fine dining and his single favorite vegetable discovery of the past year.

We spoke in October for that small piece I wrote, and you were telling me that Le Bernardin was open at 25 percent capacity, and the clientele was getting younger. What’s the update this spring?
We are at 50 percent capacity, and full every night, Monday through Saturday. People are very eager to indulge because I think they’re tired of COVID, but also, they want to really support restaurants. So therefore, they spend a big amount of money, and the clientele—I was looking at it yesterday and the day before—it’s a very young clientele. Very, very young. And very well-dressed, very sophisticated.

So are you kind of leaning into the idea of people wanting to be pampered?
We are—we always add some options, like adding caviar or truffles. Or dover sole, things like that, as a potential supplement. As you know, we have the wine pairing, tasting menu. Last night, it was maybe 90 percent wine pairing and tasting menus.

Are you hopeful that New York is going to bounce back? How does it come back to what it was before?
Well, to where it was in 2019, it’s going to take time. Because in 2019, I think for New York, it was like a record. In terms of visitors and people spending and so on. 2019 was amazing. So, to go back to that, I don’t know. Maybe three, four years. But we can get to a very good level, maybe ’22? 2021, I think it’s a year of recovery, coming back slowly. As we know, it’s going to open all the way in the fall—people are coming back to their offices in the fall, a lot of them, and then we know for sure, in 2022, everybody’s going to be back. And I believe it’s when we’re going to start to see the city really booming again.

Where are you going out?
I went to Balthazar the other day. Surprise! [Laughs] On Sunday, I went to Campagnola, which is an Italian restaurant on the Upper East Side, an iconic restaurant. I go mostly on the weekends, because during the week, I have to be at Le Bernardin. But the restaurants are packed, and everybody’s saying the same thing: people are very eager to support the community and to go out.

A lot of home cooks, when you think about cooking vegetables, there’s always a crutch of adding a lot of fat. You’re going to add cream, or you’re going to add a lot of olive oil for roasting, to make them crispy. But your cooking is not like that at the restaurant. You’re very lean, and you’re very dynamic with acidity. How to you teach a home cook to not just add a lot of butter to those beans?
Well, it depends—I’m not anti-butter! [Laughing.] I just do not use that much butter, because I’m from the Mediterranean. It’s not my culture. People in Paris, they use crème fraiche and so on, and I’m not anti-butter and anti–crème fraiche, but because of my education, and because of living in the South of France, our cooking is more about olive oil or strong power coming from strong spices and herbs, things like that. So here, in Vegetable Simple, we have a lot of recipes that do not require—that don’t make the dish rich, basically.

Is there one vegetable that you really fell in love with during the writing of the book?
It’s hard—I always say, it’s like asking a father, “Who is your favorite child?” The vegetables are really, really amazing at connecting you with the present. Because we divide the year in seasons, four seasons. But really, at the end of the day, it doesn’t work like that. The peas are at the beginning of the spring. They’re not at the end of the spring. The asparagus, the white asparagus, the season is right now. In one month, it’s over. The morels are starting to be good now, a little bit, but they’ll be amazing a month and a half from now. And then the chanterelles will come, and other vegetables will come, and at the end of the spring, beginning of summer, we’re going to start to see zucchinis. Toward the end of the summer, we’re going to see the tomatoes. So vegetables really are a great connector with the seasons, with the reality of what the season brings to us.

Yeah, it’s like mindfulness in some ways. It’s being very present, and that’s an important tenet to live by when you’re cooking. Then, on the flip side, I must say, when is it okay to use frozen vegetables?
Yeah, to me, it’s better to use good-quality frozen ingredients rather than mediocre fresh ingredients. So, let’s suppose you want to do a pea soup, and all the peas are very starchy, and it’s too late in the season. Well, go buy some good-quality peas that are tiny, have no starch, and you’re going to have a delicious soup. Why bother peeling the peas, you know? To me, what makes sense is to use the best ingredients available. And today, technology allows us to freeze, and there’s basically almost no difference between the fresh and the frozen.

I think there’s this idea that the chef never cooks frozen. It’s a myth, right?
Well, at Le Bernardin, we do not use frozen. But a lot of restaurants use frozen, and you would not know the difference.

Do you still visit the New York City Greenmarkets, and are they different now than when you started cooking at Le Bernardin? What’s the difference?
Well, it’s a big difference. I started to cook at Le Bernardin in 1991. In New York, what we had was Union Square. That was it. And at Union Square, we could find some good products, but it was not that many farmers. And the diversity was not as big as now. It was not so much, but it was good products. Today, actually every Sunday, you go to the Upper West Side by the Museum of Natural History; you have this gigantic market. It’s a city block around the museum, and you have so many different farmers who offer produce and fruits, and honey, and whatever they have in their farm. And the same thing at Union Square; Union Square became gigantic now. You can get, like, zucchini flowers. In 1991, zucchini flowers? Good luck. You are not getting zucchini flowers.

What are your summer plans? Outside of working every weekday—are you going out to the beach? Going to the shore?
I’m going to be at Le Bernardin all summer long. And I hope I can take Saturdays off, and go to the Hamptons. And that will be it. No vacation.

When we can travel, and when you have the restaurant under control, where are you going? For vacation, or just for TV stuff, or just your own research?
I really want to go back to Asia. I would love to go to Japan, Korea. Then Singapore. I would love to do that right away. So that may happen whenever we have enough cooks and clients and the restaurant is doing fine. I’m really, really excited to go to Stockholm. I want to try this restaurant called Frantzén; they have a cookbook that just came out. And I’m fascinated by Frantzén. I would love to go eat there. And then probably stop in Denmark and go to Copenhagen and the usual suspects—Noma, Geranium, things like that.

I love Geranium. I was lucky to have a meal there.
I want to go there. My mother lives in Spain; if Spain is okay with COVID, I’ll go to Spain. You know, things like that. That would be my dream.

Okay. You’ll visit your mother, that’s nice.
I have to!

You have to! [Laughs] Good segue. I ask you every single time we talk—I love your memoir, 32 Yolks—I need to read it again, to be honest. And I’m going to ask you one more time, are you going to write a sequel?
No. [Laughs] Because from the moment I came to America, my life has been pretty documented by people like you.

WARM POTATO AND GOAT CHEESE PARFAITS
There are many recipes that call for the investment of a mini kitchen torch, and this is one of the better ones, utilizing Yukon Gold potatoes and briny olives.

MUSHROOM BOLOGNESE
Comforting and stick-to-your-ribs, this classic Northern Italian pasta dish gets totally reimagined with button and maitake mushrooms as its umami core and the addition of red wine and hot sauce.

SHAVED FENNEL AND PARMESAN SALAD
Fennel and Parmesan make for a clean, beautiful, and uncomplicated salad for all seasons. Goes well with . . . mushroom Bolognese.

Last week, we caught up with chef and cookbook author Bryant Terry to find out more about his exciting new imprint, 4 Color Books.

Paula Forbes interviewed me for her great cookbook news and notes newsletter, Stained Page News. We talk about the state of cookbooks and what’s it’s like to work with chefs, and I excitedly discuss an upcoming project with my buddy, the chef Deuki Hong. Koreaworld: A Cookbook is out in 2024 from Clarkson Potter!

A few weeks back, we spoke with Reem Kassis, author of The Arabesque Table, a book that considers a centuries-long culinary journey through fusion, migration, and industrialization.

Foodheim, by Eric Wareheim and Emily Timberlake, is available for preorder, and it’s sure to infuse your future parties with laughs and chicken parmesan.

Longtime blogger and author Heidi Swanson, of 101 Cookbooks fame, has a new cookbook: Super Natural Simple—and we’ll be catching up with her very soon. Watch this page.