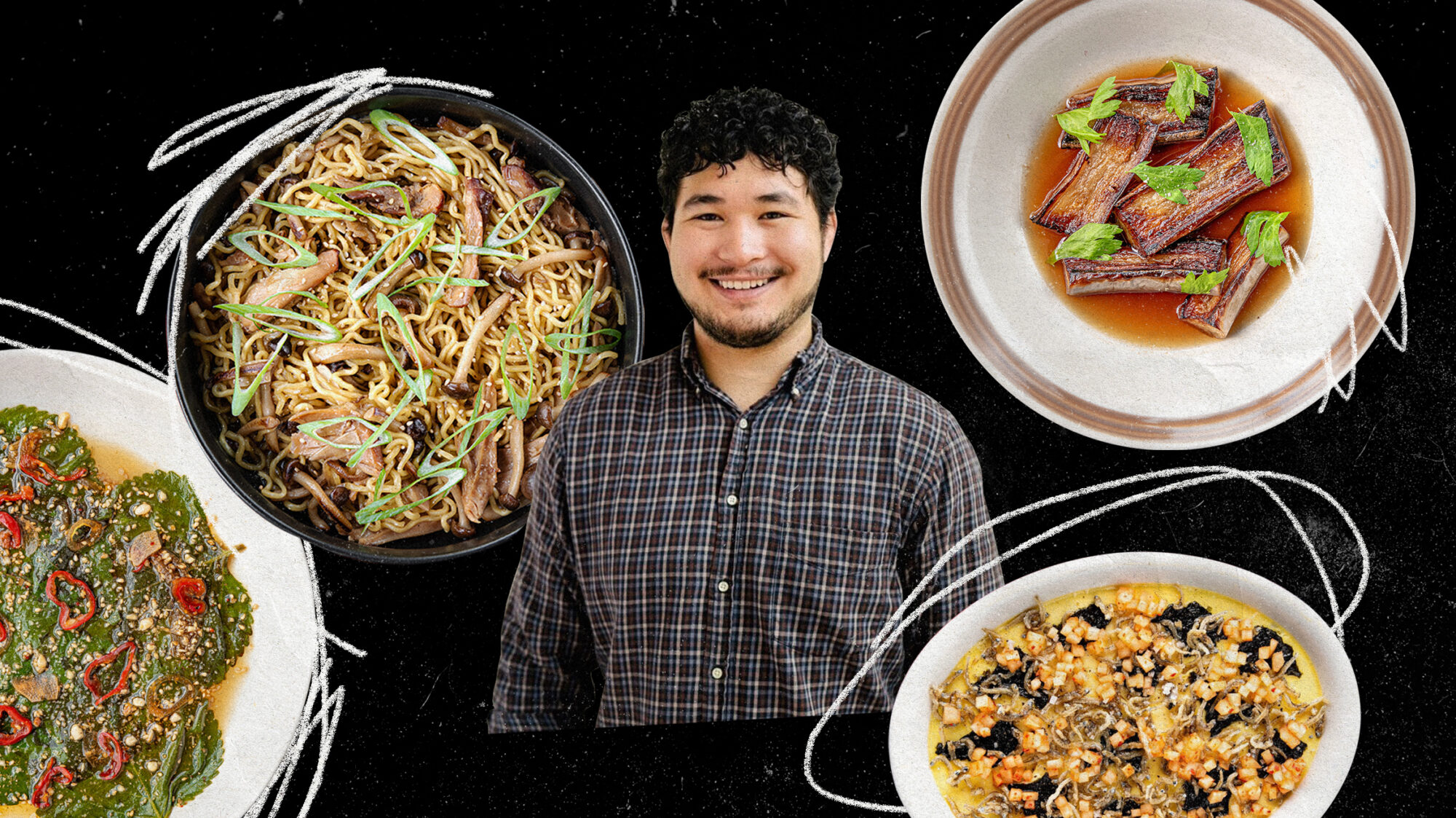 Chef and budding TV personality Daniel Harthausen is one of the most exciting fresh voices in food, having just won the first season of HBO’s very good cooking competition show The Big Brunch and running the roving pop-up Young Mother in Richmond, Virginia. “It’s going to become a name that people know,” said Big Brunch’s showrunner and head judge Dan Levy, and I cannot disagree. The cooking, at least gleaned from the feed (I haven’t tasted it quite yet), is inspired, rich in history, and linked to the chef’s Korean and Japanese heritage. There’s a North Korean dumpling featuring four types of meat, oyster, mung bean, summer squash, and pine nuts folded in wheat dough, then cooked in a stock. Summer corn tempura? Wow.

Harthausen was raised by a Japanese-Korean mother and a half-Korean father and “had a baseline of what really good Korean food tasted like, without really knowing it at the time,” he says. And he’s embraced his blended family history through study, showing deep empathy for a time in history (Japan’s 40-plus years of Korean occupation) that is well beyond his years. After I spotted him in an early episode, I followed Harthausen on Instagram, watched a few more episodes of the show, and reached out for a call to discuss his interest in Korean cooking and his plans for the $300,000 prize.

You grew up in Wyoming, Seoul, and Virginia. When you lived in Korea, living near a military base, were you eating American food because it was what was available?
I never really ate out as a kid, but they would have the military American restaurants, and it would be a special thing to eat on base, like at a Chili’s. [Laughs.] But our regular meals would be kimbap, tteokbokki, and that kind of stuff. I found a lot of comfort on base, because it was the first time I was around a lot of other mixed-race kids and also a lot of Koreans that went to the [Department of Defense Dependents] school.

Was there a dish that sticks out in your mind that you loved?
I didn’t know what soondae [editor’s note: a mild Korean blood sausage] was when I first had it. And soondae-guk always sticks in my head because I can’t get it in America—or I can’t get it where I am, at least. I never thought I would say that I love blood sausage when I was younger, but it’s one of my favorite dishes.

I think what really got my attention is your being so articulate about the very delicate nature of the Japanese-Korean relationship. What is the relationship for you between Japan and Korea in terms of the food? How do you describe that?
At first there was a lot of animosity in my family toward Japanese culture. That was the first connection I had. But I spent a little bit of time in Okinawa, and I loved being there, and I loved the culture. I always kind of remembered and had in the back of my head that my parents and my family had so much animosity toward the country because of the occupation, but when I was there, I was like, “There’s so many similarities with food.” There’s the use of pickles on the table, the use of side dishes, obviously eating everything with rice. The idea of having soup on the table with fish. You’re having broiled mackerel, and then you have doenjang-jjigae on the side. It’s the same thing when you’re having Japanese breakfast with miso soup.

So I kept seeing these similarities. At that age, I didn’t think of it too much. I was 14 or 15 at the time. But when I started to get a little bit older and I started to research more, I wanted to find a way to see if there was a similarity between the two cultures. Then I started to get really interested in Busan, the southern tip of Korea. During occupation, Japan actually came through that port, and so a lot of the echoes of Japanese culture exist there and kind of spread out through that southern tip. So when I’m exploring different dishes, I try not to do this thing where I’m just smashing two things together.

That’s exactly why—and I’ve written about this with Korean food a little bit—everyone smashes. And no one’s articulate like you. I really respect and appreciate that.
I really appreciate it. It’s a learning moment for me, because I was never taught about Japanese occupation until I was in college, when I found out about it. My parents never really told me about it; they were always just like, “Oh, no, we don’t like Japanese people,” and they never really explained it. After I started researching, I was like, “How do I not know about this?” It’s such a recent thing in the cultures. Every day it kind of motivates me to learn more about it and figure out different things that connect the two cultures.

At first there was a lot of animosity in my family toward Japanese culture. But I spent a little bit of time in Okinawa, and I loved being there, and I loved the culture.

What is your relationship with kimchi?
Fermentation has become a thing in modern cooking, where it’s a very buzzworthy thing that people can do and learn, and that entire restaurants are built out of. Some of the best restaurants, right? For me, when I was learning how to make kimchi and how to ferment it, I didn’t really understand fermentation, but I knew how to make kimchi. Kimchi was created as a way to make products last. To make crops last. Even in August, when you’re harvesting, and then through to the late autumn areas when you’re actually creating kimchi and using all of the different vegetables that you have. In itself, that period of time is something that I try to hold as a representation of me in the things that I’m cooking—just having those best products on hand, which, during the time when people were creating these dishes, was just by necessity.

Let’s talk about your pop-up, Young Mother. I’ve read that you’re thinking about a permanent location.
We’re looking for a brick-and-mortar location. I’ve had a lot of anxiety about the transition of pop-ups to brick-and-mortars, so a big thing for me is trying to make that opening just as exciting—by not necessarily changing the concept but maybe dialing it in. What’s exciting for me is trying to find a way to create this Korean restaurant but have it represent almost an emotion that the Korean people have felt because of the Japanese occupation and how it translates to modern times.

It’s really brave and ambitious and incredible to hear that. It’s amazing that you’re facing this head-on and you’re making it about the concept. The Young Mother name—what does that mean in terms of the occupation?
The Young Mother name is an indirect reference, because my mom had me when she was 19. But it’s going back to that idea of survival, because when my parents were younger and they had me, I remember having a very taken-care-of childhood. We always had food on the table, and I never felt this idea of suffering or poverty or hard times. Even though, when I talk to them now, I knew it from them, and from my own perspective of being 19—I could never even imagine taking care of two children. They had me and my older sister. And so it was going back to the idea of survival, and having food and dishes that are created because of this push into poverty. It’s also a reminder of the sacrifices my parents have made as second-generation and first-generation (in my mother’s case) immigrants to America, creating this life for me.

What are you going to do with the $300,000 you won from The Big Brunch?
It’s going to be a huge push toward helping me open the restaurant. It’s going to allow me to have some creative ownership over what I want to do and have a unique concept. I think it’s going to be a good way for me to bring such a unique idea and unique voice to the culinary world.

This interview has been edited and condensed for clarity. Food photos: Nick Hancock