Get a free recipe
Subscribe
Cook That Steak to Medium…Cold
By: Ashley Rodriguez Photos: Gentl + Hyers 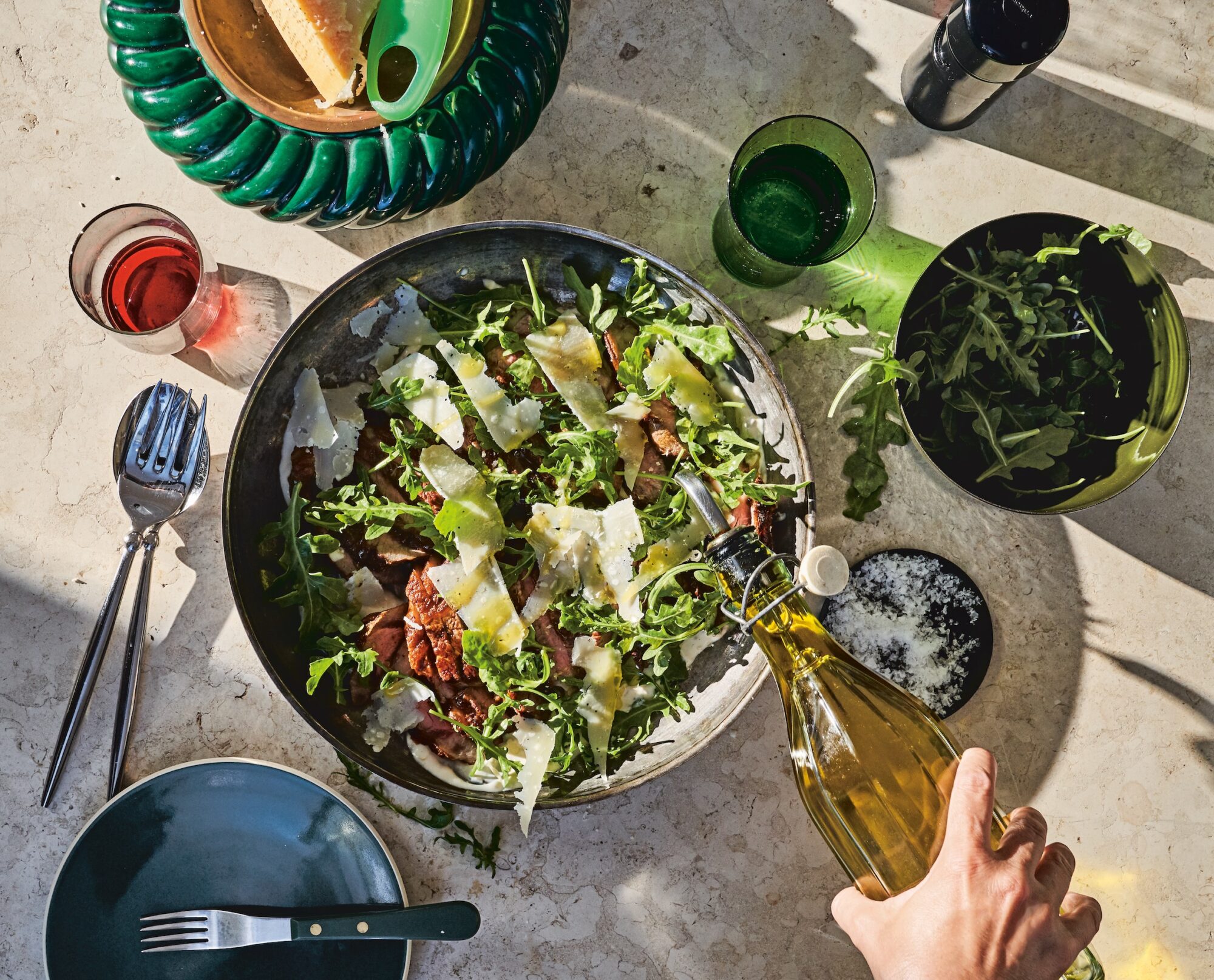 Grilling steak for tomorrow’s salad or sandwich isn’t leftovers, but meal prep for the lazy and overheated.

A searing hot steak with perfect grill marks is sizzling away, then served piping hot to a table of smiling customers. You’ve likely seen this scene in any number of commercials for fast-casual restaurants that lure in customers with the promise of a just-cooked steak. What you don’t see is a steak resting after cooking, or being served at room temperature or even chilled. But a hot steak isn’t necessarily the most delicious way to enjoy it.

“We have this idea in our heads of, like, the Red Lobster commercial, where the steak is charbroiled and very hot,” cookbook writer Carla Lalli Music says over Zoom, “and we have this idea in our heads that steaks have to be served this way because that’s how they’re marketed.” For many, ripping hot is the steak serving standard. But in her cookbook, That Sounds So Good, Lalli Music salutes cold steak as an underrated cooking preparation: “People talk about a ‘hot juicy steak’ as the height of steak enjoyment,” she writes, “but there’s something to be said for a cold or room-temperature version.”

Cooking steak to intentionally serve later at a cooler temperature is a nearly foolproof way to enjoy the beef’s full spectrum of flavors. It also wards off dryness. Even if I think I’ve rested a steak enough to ensure the juices don’t get lost when I slice it, cutting is a toss-up. Letting a steak chill for a few hours ensures that all the juices have settled, while also opening up a new variety of recipes and ingredient combinations.

Lalli Music’s recipe pairs room-temperature steak, ideally a New York strip, with Parmesan, a Caesar-style dressing, and arugula, which would wilt under the heat of a just-grilled steak. The preparation is inspired by a few touchpoints. “There’s classic Italian salad of tagliata, which is sliced steak served at room temperature, almost like carpaccio,” she says. “And Frank Falcinelli and Frank Castronovo have a recipe in their cookbook, The Frankies Spuntino Kitchen Companion & Cooking Manual, for a delicious, room-temperature steak that had garlic and parsley and thyme that I loved.” Lalli Music notes that cold steak isn’t new; we’re just used to calling it something else. “I don’t think people think of roast beef as once having been a hot roast steak before it is cooled down and then sliced and served in sandwiches.” But that’s exactly what it is.

Letting a steak chill for a few hours ensures that all the juices have settled.

Cooking a steak is stressful enough: a matter of a few degrees can mean the difference between blueish raw and overcooked gray. But finding the right moment when a steak is both rested and still hot is even trickier. Lalli Music encourages people to use a thermometer when searing steak to ensure it’s perfectly medium rare (around 120 degrees Fahrenheit), and notes that serving it room temperature takes some of the heat off when it comes to calculating rest time. “The idea is that you’re gaming something for the host,” she says, noting that the steak can be prepared hours (or even a day) before guests arrive, so the salad can be thrown together moments before eating.

Lalli Music’s recipe calls for a New York strip steak, but she also encourages folks to experiment with cuts they might not always reach for. “Nothing too fatty, like a rib eye—even though it’s considered such a prime cut, it has so much fat that when it cools down, you’re going to have these clumps of fat that aren’t as enjoyable at room temperature,” she says. “I don’t really like fillet, but I think fillet is a good choice for this, and it’s pretty common in carpaccio because it doesn’t have those pockets of fat. And skirt steak has a lot of that intramuscular marbling, but it’s very evenly distributed—and it’s just an easy, delicious cut.” Cold steak never felt so hot.