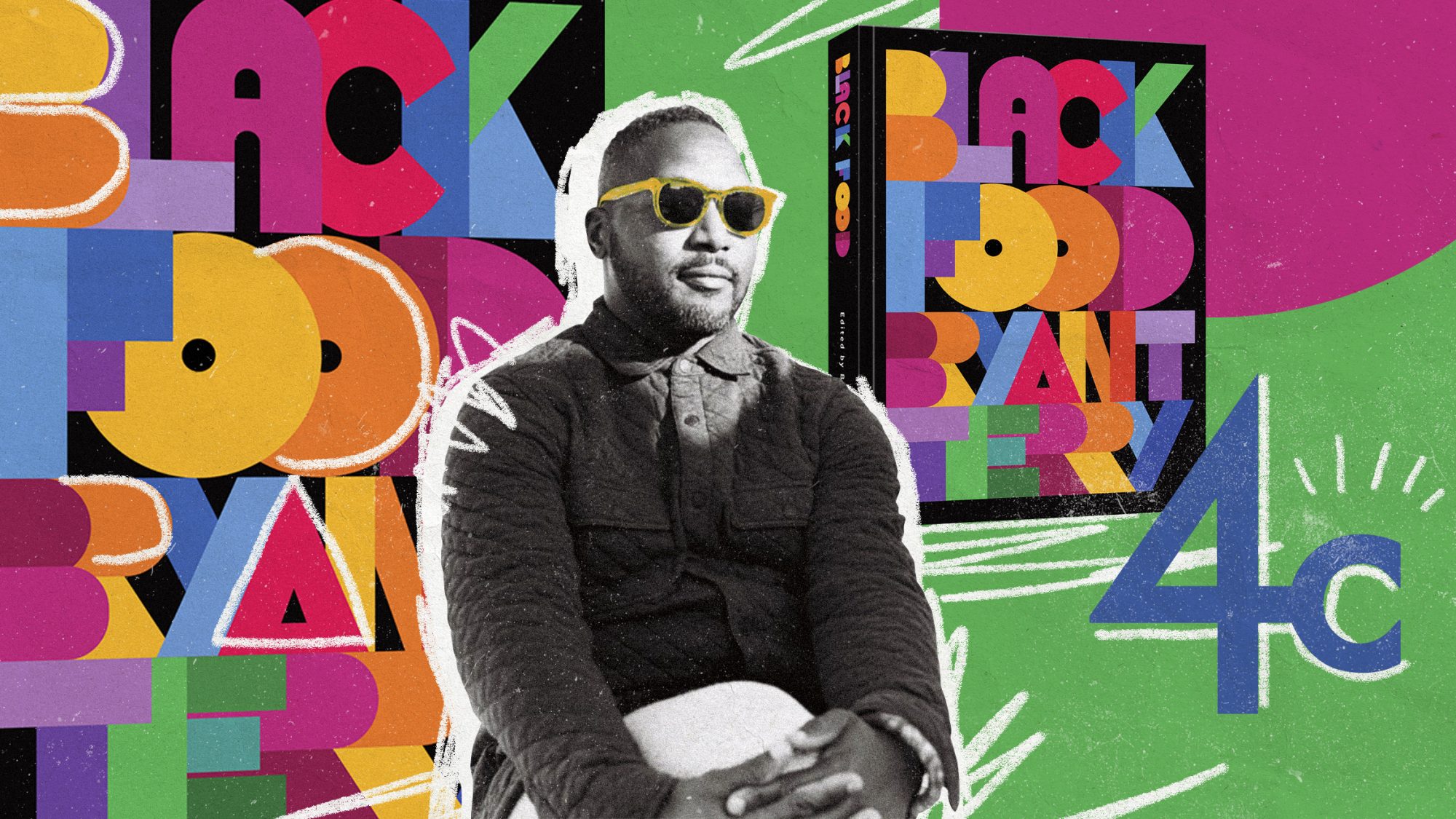 The chef and author’s new publishing imprint, 4 Color Books, is diving into the diverse world of art, culture, wellness, and food.

A prolific chef and cookbook author, Bryant Terry has been the chef in residence at the Museum of the African Diaspora in San Francisco since 2015, and he has released several seminal works that celebrate Black cuisine and cultural identity through food. Following on the heels of Vegan Soul Kitchen and The Inspired Vegan, Terry’s 2014 book, Afro-Vegan, reworked the classic dishes of the African diaspora into a vegan framework, while 2020’s Vegetable Kingdom displayed the author’s knack for prudent recipe writing wedged between stories, musical playlists, and sharp art direction. These small details are the connective tissue that makes the best cookbooks more than just a binder of ingredients and directions, and Terry has the eye for greatness.

So it was little surprise when it was announced recently that Terry would be overseeing 4 Color Books, a new publishing arm of Ten Speed Press with a focus on a variety of lifestyle topics including food, art, culture, wellness, and self-care. The imprint will launch in the fall with the publication of Black Food—a celebration of the voices of the African diaspora featuring writing from Zoe Adjonyoh, Leah Penniman, Michael W. Twitty, and Thérèse Nelson, as well as original art and photography from more than a hundred contributors. As editor in chief, Terry will work alongside a staff of his choosing (more on that below), as well as editors and the production team at Ten Speed. I recently got in touch with Terry to hear about the big plans afoot.

Imprints are rare in publishing—and I could not think of a better person to have one than you. How did the idea come about? Did you pitch it? And were you always thinking about “4 Color Books” as the title?
I appreciate the kind words! My literary agent, Danielle Svetcov, and I have long had a vision of my running a publishing imprint (she and I brainstormed several names and landed on “4 Color”). In many ways, 4 Color is simply formalizing what I’ve been doing for years—supporting budding authors and food creatives with an emphasis on BIPOC.

When my first book, Grub, was published in 2006, my coauthor, Anna Lappé, and I had the privilege of doing some events with her mother, Frances Moore Lappé, because she was celebrating the 35th anniversary of her seminal book Diet for a Small Planet. I learned so much from her—from constantly improving one’s craft to being well-prepared for press interviews. I vowed that I would pay it forward and support up-and-coming food creatives and budding authors. Then came 2020. ‘Nuff said. There was no better time to bring the imprint idea to Aaron Wehner, executive vice president at Crown Publishing/Random House. He was very receptive, and we started moving toward a shared vision of what 4 Color could be. In addition to publishing books, 4 Color will be putting resources into supporting BIPOC food creatives, including a Black Food Summit at the Museum of the African Diaspora in San Francisco this fall.

I mean, this is a full-time job, no? You must be excited about the future—but how do you balance it with your other work?
I have been building a stellar team to support all my projects—from this imprint to my creative agency, Zenmi. When I read Think and Grow Rich in my twenties, I learned about the concept of a Mastermind group, a circle of peers who are available for brainstorming ideas, learning together, holding each other accountable, and being better people and professionals. I’m not good at everything, but I know how to enroll awesome collaborators who are brilliant at what they do. I’ve been studying Kanye West since I became a fan in the early aughts, and the two biggest lessons I learned from him: 1. Believe in and invest in yourself, and 2. Surround yourself with a talented team. Shout-out to my agent; my editor, Kelly Snowden; my creative director, Amanda Yee; and my cultural strategist, Ashara Ekundayo. Major love to my most consistent and supportive partner in everything, my wife.

What was the biggest challenge in editing Black Food? It’s an ambitious book and really unique. Are you wrapped on it or still working?
Let me start by saying, WE PUT THIS BOOK TOGETHER IN NINE MONTHS! On one hand, working on Black Food saved my life by giving me a project to focus on while we were sheltering in place. On the other, I was working my butt off during a pandemic. I made it a point to have an extended conversation with almost every contributor to share my vision and motivate them to be a part of the project (shout-out to those who said yes in the first few minutes). So, for about one month, I had half a dozen meetings every day of the workweek with potential contributors from around the globe.

In the midst of that, I was juggling so many things—determining the best way to structure the book; curating the art pieces that open each chapter; putting together the team to make the photos (shout-out to Oriana Koren, Lillian Kang, and Jillian Knox); working with our brilliant art director/designer George McCalman and his assistant, Aliena Cameron, to envision the cover; setting the visual language for the book; and planning safe photo shoots with ever-shifting CDC advisories. I was so lucky to have the brilliant publishing veteran Jenny Wapner as Black Food’s project manager. This book would not have come together so quickly without her hard work, publishing expertise, and general brilliance. In the end, this was a collective effort, and a lot of people brought their A game in order to create this important book.

We all were so happy to see your first book is by Rahanna Bisseret Martinez—she worked with TASTE senior editor Anna Hezel on this great story and recipe, and we all saw a future book in her work. What drew you to her?
I had heard buzz about Rahanna a few years back, after she appeared on Top Chef Junior. We finally met when she and her family attended one of my events at the Museum of the African Diaspora. After that, I would see her at all my events, sitting in the audience, taking copious notes. Like many of the older food creatives, I was excited to do all I could to support her budding career, so I became a mentor and would often hire her to help cook with me at private events. I was so impressed with her intelligence, commitment to her craft, and pride in uplifting her family’s foodways. When it was clear that this imprint would become a reality, I let her know I wanted her book to be our first acquisition. Besides being her publisher and mentor, I am a HUGE fan.

Who designed the 4 Color logo? It’s really nice.
My friend Joshua Lunsk designed the logo. He has been my go-to designer for two decades. The first logo he created for me was one for b-healthy, the community-based organization I founded in New York City in 2001. If there are any projects that I’m leading, he probably designed the logo. I’m a very visual thinker, plus symbols are one of the tools I use to manifest things I desire. Immediately after my agent and I landed on a name, I texted JG and asked him to mock up logos for the imprint. After he sent them, this concept became real for me. I printed out all six of his designs, taped them on the chalkboard in my workspace, and spent time every day meditating on my favorite while envisioning running a wildly successful imprint five years from then. As the rapper Tobe Nwigwe rhymes in his song “Father Figure,” “I envisioned every piece of fruit I brought into fruition, ooh.”

When we connected last spring, we discussed music—which Vegetable Kingdom is loaded with. There are so many great tracks. Are you pursuing music and art books as well as cookbooks? How does the mix work? Which musician do you want to work with on a book?
I think it’s important for me to build the foundation of 4 Color with cookbooks, since that’s my wheelhouse, but we will be publishing books about all the things that I love—music, visual art, poetry, self-help. If it’s a highly visual four-color book, it potentially belongs on the 4 Color list. And, yes, I would love to work with some musicians. I wanted to work with Juicy J, founding member of the Memphis hip-hop group Three 6 Mafia, but he already has something sold and in the works. It would be a dream come true to work on a book with my uncle Don Bryant. He has a storied career as a songwriter, and his 2020 album, You Make Me Feel, was nominated for a Grammy. This man is 79 years alive and still going strong.

What are two books you’re looking to publish? This could be as specific or as broad as you want. But I’m sure you have a list.
“The most disrespected person in America is the Black woman. The most unprotected person in America is the Black woman. The most neglected person in America is the Black woman” is a quote from a 1962 speech by Malcolm X that I think about often. I will always use my position, platform, and power to uplift Black women. It’s why my first event as chef in residence at MoAD in 2015 was “Black Women, Food, and Power.” It’s why Rahanna’s book was our first acquisition. I look forward to working with a diversity of authors, and I will always ride hard for my sisters. Broadly, sky’s the limit in terms of book projects: an art book about BIPOC and outdoor subcultures; a graphic novel about Afro-Asian solidarity; a book by my favorite poet, Michael Molina; and zines. Expect mind-blowing zines from 4 Color. Sky’s the limit.