Get a free recipe
Subscribe
Break out the Charcoal and Fish Sauce
By: Matt Rodbard Photos: David Loftus 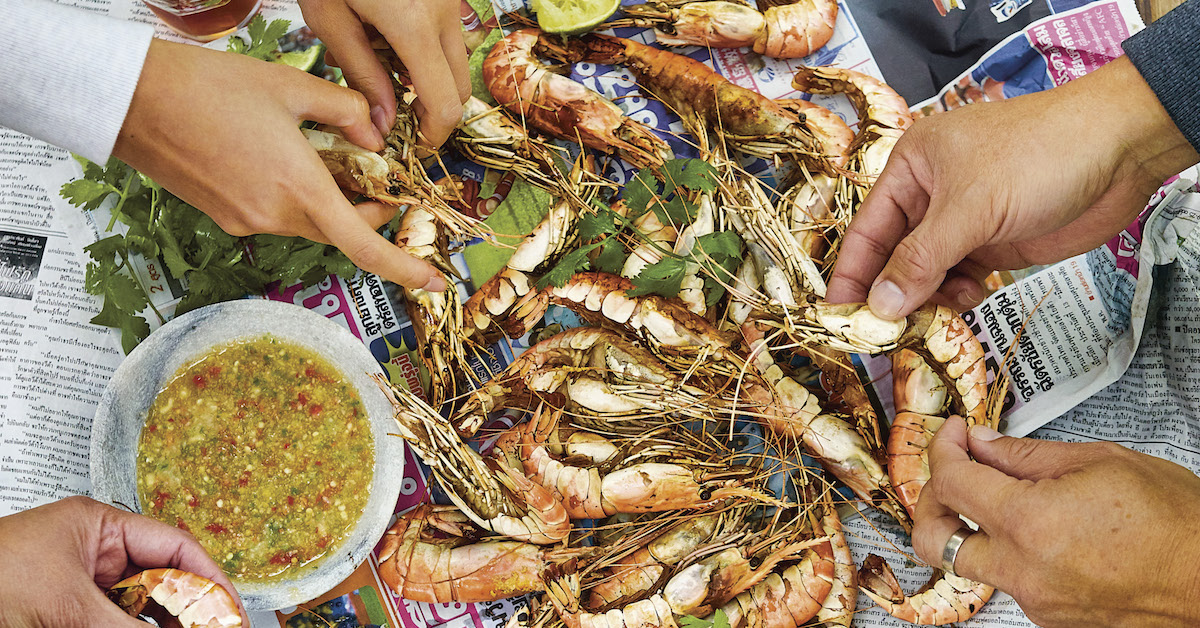 A new book, Flavors of the Southeast Asian Grill, makes the strong and fragrant case for an exciting style of outdoor cooking.

Word on the street—within food editor circles that is—was that Leela Punyaratabandhu, author of Simple Thai Food and Bangkok (winner of the 2018 Art of Eating Prize), wrote a mean recipe. But even more crucial (and rare) was that, in addition to cooking chops, her writing was full of voice, wit, and lyricism. I had known her books and blog (she entered the scene as She Simmers and still holds those social handles), but I didn’t fully appreciate her writing until she started working with TASTE, writing colorfully about her love of a lesser-known, and delicious, canned fish and praising fennel from seed to frond to pollen to bulb. I love those stories.

Her new book, Flavors of the Southeast Asian Grill, doesn’t skip a beat, and in time, it might eventually be the cornerstone of the Punyaratabandhu canon. It tackles a big topic: grilling in Thailand, Vietnam, Laos, Malaysia, and other locations around the vast region where cooking and smoking over a live fire is as common as the slow cooker is stateside. “I didn’t start out with a list of iconic grilled dishes from each and every country and region and culture—and subculture—of Southeast Asia,” Punyaratabandhu says from her home in Chicago. “Instead, I started out with a list of dishes found in Southeast Asia that I like to make and eat.” That long list was eventually narrowed down to recipes that could be replicated “faithfully and easily” in the West with common barbecue gear.

This means Isan-styled grilled chicken with lemongrass, oyster sauce, and fish sauce—as well as a smart way to grill a whole fish with herbs (Thai basil, Vietnamese coriander, mint, dill, cilantro) and tamarind sauce. It means salads made with just-plucked citrus fruits, and hunks of pork shoulder smoked in a barrel. A trip to the Asian supermarket in your town (and, yes, there is one in your town) will most certainly hook you up with everything you need. This book is an invitation to rethink your backyard kitchen while pluming your neighborhood with charcoal, fish sauce, and sugar. An invitation I recommend you accept. —Matt Rodbard

First up, how are you doing right now? And what have you been cooking while at home?
I’m doing great. Thanks for asking! I’ve recently started buying meat in bulk directly from ranchers (my chest freezer is full) and fruits and vegetables directly from local farmers, so I’m okay now. Scarcity brings out the creative side of you. A healthy dose of irreverence doesn’t hurt either. For example, I’ve been making Thai curries with canned evaporated milk because I couldn’t get coconut milk delivered in time. I’d like to inform my Thai ancestors that those curries are actually pretty darned good.

The geographical borders are political boundaries, and there are a lot of overlaps between the cuisines within this region. One example is the soured pork sausage (uncased) you call naem in many parts of Thailand. It goes by jin som in northern Thailand, som mu in northeastern Thailand and Laos, and nem chua in Vietnam. Several iterations of the same dish have been developed regionally and diachronically, and the dish is very much entrenched in all of these culinary cultures. Which country are you going to assign it to in a multi-cuisine book like this?

The collection also covers everything from the most traditional dishes, like roasted suckling pigs, to fun, modern dishes like the sticky rice burger that sells like hotcakes at any neighborhood 7-Eleven in Thailand.

What’s the biggest misstatement about the Southeast Asian grill? Correct it!
You know how the myth about how the best food in Thailand—or perhaps all of Southeast Asia—is found on the street just won’t go away, no matter what? It’s the same thing all over again, this time with this one genre of food: grilling. It’s been more difficult than I had hoped to get some people to think beyond satay, skewers, and other quick bites from street carts when discussing the grilled and smoked foods of Southeast Asia.

So the book tries its darndest to show that there’s so much more to explore. It introduces to you roasted whole suckling pigs, sausages lacto-fermented for days, short ribs cured and then smoked, big chunks of pork smoked in a barrel, sauces and salads made from grilled ingredients, grilled pork dressed with a sprightly dressing made from just-plucked citrus fruits from the home garden.

The grills of Southeast Asia are legendary to some, yet the grills in East Asia (Korean barbecue, Japanese yakitori) often steal the press. Why so, and why is the grill so important in Thailand, Vietnam, Laos, and so on?
It’s because many Korean and Japanese restaurants stateside routinely offer these things, are often good at it, and are equipped to accommodate indoor grilling. Because of this, an expectation has been long set among their clientele.

That’s not the case with Southeast Asian restaurants. With the exception of Thai restaurants, they’re fewer in number to begin with. And the majority of Thai restaurants, which dominate this segment in terms of number, are still stuck in the rut of the same cookie-cutter menu. With this menu, which almost never involves the traditional charcoal cooking, Thai restaurants debuted in the United States a long time ago, setting the expectation early on.

We’ve seen some daring newcomers in recent years, though, who’ve tried to introduce the rich live-fire cooking of Thailand, Laos, and other countries in Southeast Asia to the West. I’m rooting for them. I really want them to succeed.

You have written books about the foods of Thailand. But what did you learn most when tackling a wider territory?
There are so many shared culinary heritages within Southeast Asia, and it blows my mind how each culinary culture in this region has managed to remain distinctive in the midst of ongoing globalization and—recently—social media–driven food presentations. Take satay, for example. How many ways can you make and serve chicken satay with peanut sauce, right? Well, try chicken satay with peanut sauce in Bangkok (much harder to find than pork satay, but not entirely impossible), then try the same thing in Kuala Lumpur, then Singapore, then Bali. They’re all different, both in taste and presentation. It’s the same thing with grilled chicken and grilled pork skewers throughout the region.

Chicken and pork play big roles on the Southeast Asian grill. Quick, what’s your favorite recipe for each?
I can’t go to Malaysia or Singapore without eating grilled soy sauce chicken wings—hot, crisp, and fragrant off the grill. I just can’t. I’m also known to get weepy just thinking about the grilled northeastern Thai soured sausage. If there’s a better sausage on earth, I haven’t had it.

While we are stuck at home, with slightly limited availability of products, how do you suggest we grill in your way—and cook from this book?
There are many recipes in the book that require very few common ingredients. The smoked eggs with spicy garlic-shallot relish are so simple you can make them three times a day. Also, even though I sometimes group multiple dishes into one set meal, it’s only because my job as the author is to be as faithful as I can in presenting these dishes to people as I know them. I group a grilled chicken together with a bamboo shoot salad and a batch of sticky rice into one big recipe entry. But that’s only because it’s how you typically compose a meal in the northeastern region of Thailand.

Last question: Why is this book perfect for these imperfect times?
It’s hard to plug a product during these trying times without sounding tone-deaf or appearing oblivious to the pain all around us. I’d say this, though. While we’re all hunkered down at home for our own sake and others’, if my experience means anything, live-fire cooking outdoors brings comfort and joy. It gets us out of the house and into the yard—and that helps already.

But there’s something about cooking over the fire that you’ve built yourself that’s so empowering. Knowing how to control the temperature well is crucial when it comes to cooking, and live-fire cooking teaches us skills beyond the turning of the burner knobs, sharpening our instincts and making us better cooks. And to do that as a fun outdoor family activity while also exploring different flavors and discovering new favorite dishes? There’s some small joy to be had right there in the midst of all this. 4 EXCITING RECIPES FROM FLAVORS OF THE SOUTHEAST ASIAN GRILL

Ghee-Smoked Chicken and Rice
Marinated chicken thighs are cooked on a charcoal grill and nestled on a bed of fried rice before the entire thing is smoked to finish.

Grilled Eggplant Salad
Just throw eggplants on a grill whole, and cook them until they are charred on the outside and soft and sweet on the inside—a perfect canvas on which to paint a colorful combination of flavors, like the wonderful coconut milk–based dressing used here.

Grilled Stuffed Thai Chicken Wings
Called “angel wings” at most Thai restaurants in the United States, this dish has been a favorite among Southeast Asian immigrants in North America and Europe. Curiously, however, it’s rarely served in Thailand.

How to Dress an Egg is the debut book from Ned Baldwin, a New York City home cook turned chef-owner of the excellent Tribeca restaurant Houseman.

Ottolenghi Simple is simply the book we want to cook from right now.

Ever wanted to know everything there is to know about boba? Well, there’s now a book for that—The Boba Book: Bubble Tea and Beyond.

Ha, there’s a new cookbook for that show The Goldbergs.

This title! Coffeeland: One Man’s Dark Empire and the Making of Our Favorite Drug.