Get a free recipe
Subscribe
I Believe in the Church of Neck Bones
By: Aaron Hutcherson 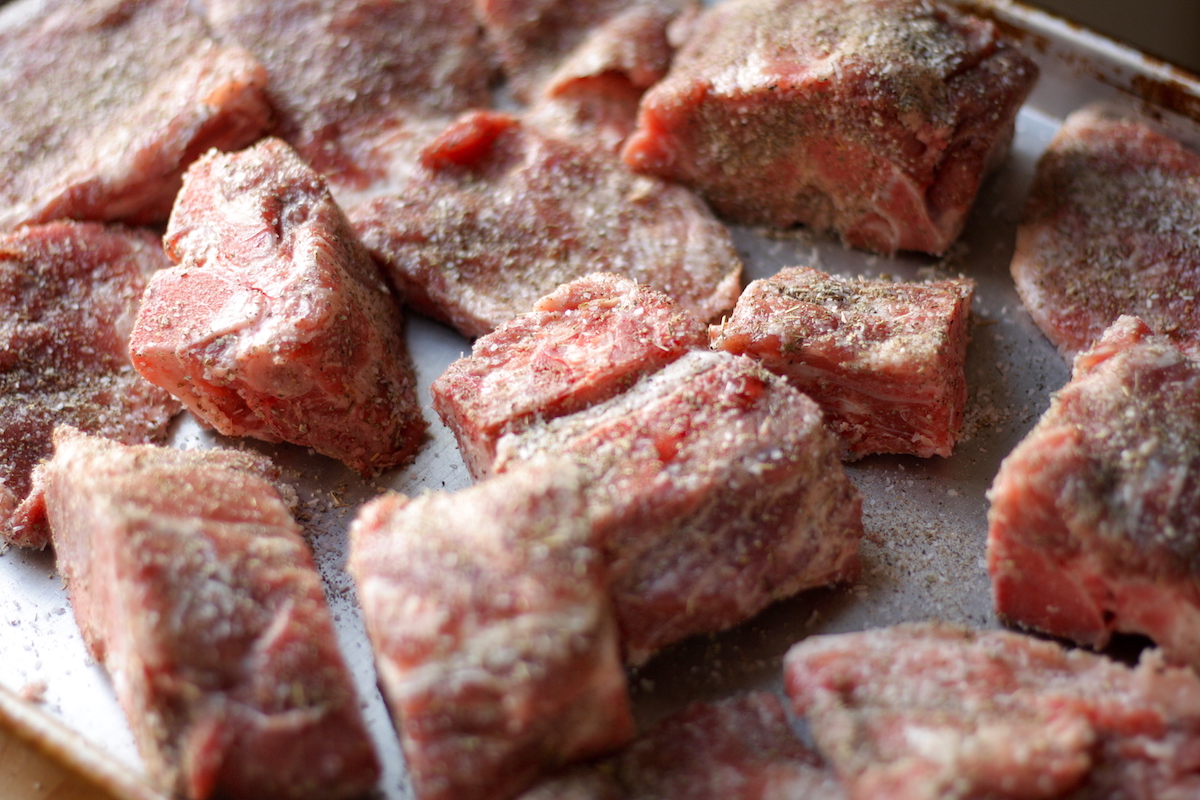 This tough meat may be a tough sell, but after a braise, the silky meat falls straight off the neck bone.

Neck bones are the Effie Whites of the meat world, brimming with the potential for brilliance but often kept on the sidelines in favor of more mainstream alternatives. Sure, many of us have encountered chicken and turkey necks in giblet bags and turned them into gravies or fried them into a chef’s snack, but pork necks and beef necks are much rarer sights.

I first stumbled upon pork neck bones almost two years ago while strolling through the aisles of my local C-Town in Astoria, Queens, one Sunday afternoon in search of meal inspiration. While perusing the meat section, trying to decide what to cook for dinner that day, my eyes landed on pork neck bones on sale for around $1.50 per pound. The price was what caught my eye, but the marbling and amenable ratio of meat to bone really sold me.

I had never eaten pork or beef necks before, but I’ve never let that stop me from experimenting with something new in the kitchen. The neck bones presented a new challenge to my cooking skills, but like any other tough cut, all it really needed was time for all of the goodness trapped within to be coaxed out. I took them on a test drive with a simple braise of cabbage, onions, sage, and chicken stock. It yielded tons of silky, flavorful meat—so much so that I ended up having to freeze some of it for later—and from then on I was a full-blown believer in the church of neck bones. The collagen from the bones and connective tissue from the tough meat broke down as the stew cooked, making the broth rich and buttery. Though I consider all of these traits positive, it also limits how neck bones can be used. You can’t sear them and turn them into a quick dinner—it takes a little patience and care to make them great.

At the grocery store, neck bones are sold cut into two-to-three-inch chunks alongside the other prepackaged cuts of meat and are ready for cooking without the need for any prep work. On average, roughly a third or half of each piece will be bone, so I try to search for the packages with the highest meat content. (If you have a butcher who deals in whole animals, you can also request neck bones, cut into cross sections about two inches thick.) Once braised, the taste and texture of the meat that comes from neck bones is similar to oxtail, short ribs, or a shank. Like their pork brethren, beef neck bones are also quite affordable—I’ve found them for $3 to $4 per pound at my local grocery store, which is a steal when compared to the cost of comparable cuts.

But if there’s a downside to neck bones’ peaceful existence outside of the spotlight, it may be that the lack of demand can make them hard to find in grocery stores. As Lyz Pfister of Eat Me Drink Me wrote in a blog post, “If your grocer doesn’t sell pork neck bones, you’re probably not poor enough.”

As much as we try to move away from the stigmas surrounding cheap food and perceived socioeconomic class, neck bones still carry the association—they haven’t been deemed “cool” yet in the same way that oxtail or pork belly have. I am here to do my part to change that.