Get a free recipe
Subscribe
A Softer Side of Celery
By: Michael Harlan Turkell Photos: Julia Sherman 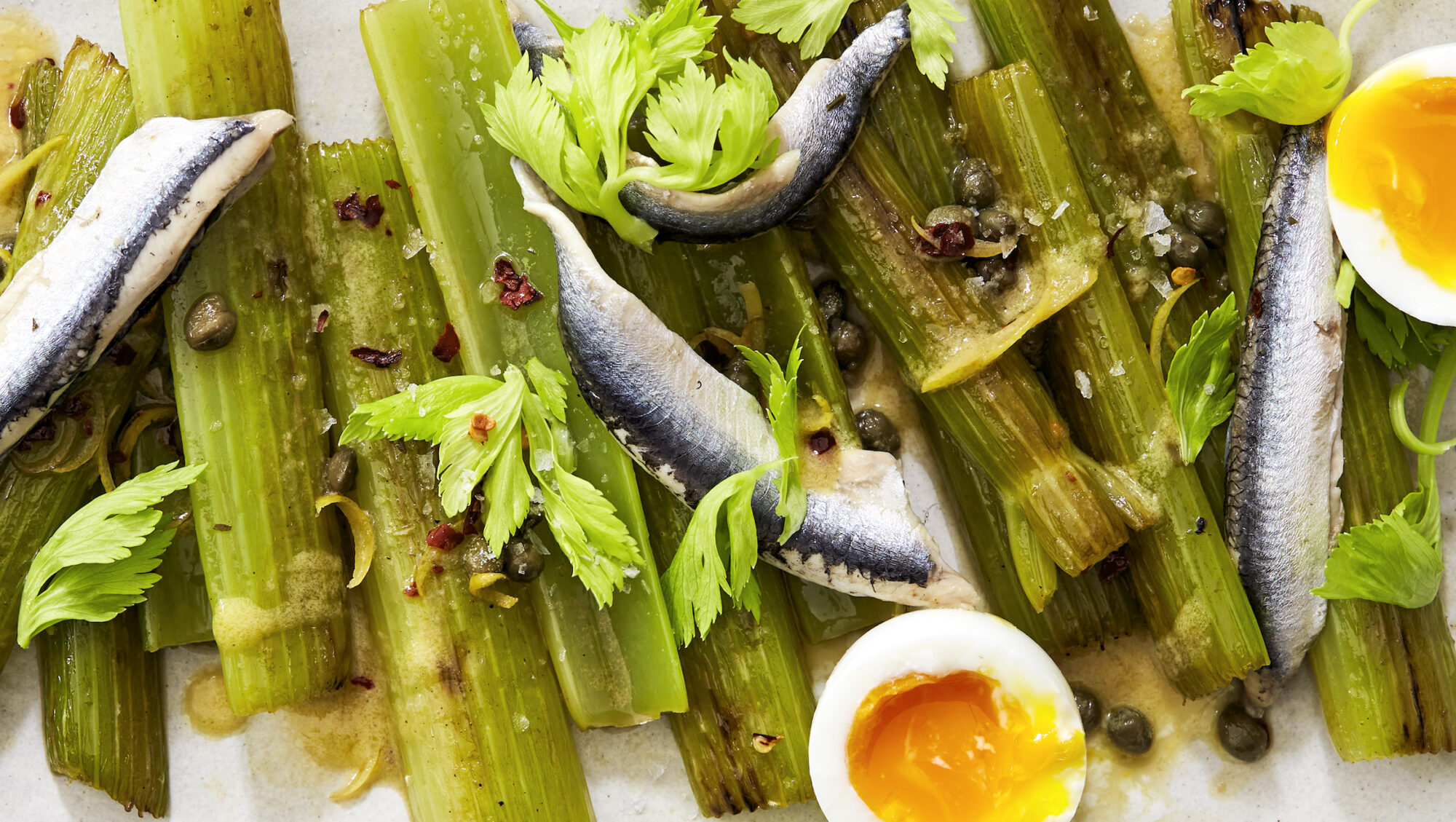 When the snappy, vibrant green fades to a dull pastel, things get really interesting.

Celery is most frequently seen as prerequisite garnish, a semblance of health food to pair with a Bloody Mary or Buffalo chicken wings, or juiced to a verdant green. Yet when cooked down and caramelized, celery joins aromatics like garlic and onions as a fundamental base for sauces and soups like French mirepoix, the Italian/Spanish/Portuguese variations on sofrito, or even the Creole holy trinity of onions, bell peppers, and celery. Its snappy, vibrant green fades to a dull pastel, and its bitter, salty bite mellows, becoming sweeter and earthier. This is the softer side of celery that is often overlooked.

Celery is a fibrous, long stalk grown in marshlands, predominantly in the Mediterranean. It has been harvested since the days of Greek and Roman antiquity, when its tender leaves were woven into crowns for competing athletes. Its roots had a more modest start in America. Alexa Weibel writes in the New York Times that “Dutch immigrants, who are widely credited with helping to develop the celery business in the United States, started growing the vegetable as early as 1874 near Kalamazoo, Mich., which was subsequently nicknamed Celery City.”

By the late 1930s to early 1940s, as noted by David Karp in the Los Angeles Times, “Los Angeles was the leading agricultural county in the nation, [and] celery was its largest vegetable crop.” Sometime between celery’s arrival and its boom, American cooks began to use the vegetable in novel ways. Victor Hirtzler, who invented Crab Louie during his tenure as the head chef of San Francisco’s landmark St. Francis Hotel, created another now-classic dish in 1910: Celery Victor. Much like a classic leeks vinaigrette, Hirtzler simmered celery hearts in chicken, veal, or beef stock, then chilled them in a vinaigrette made of either citrus or vinegar. 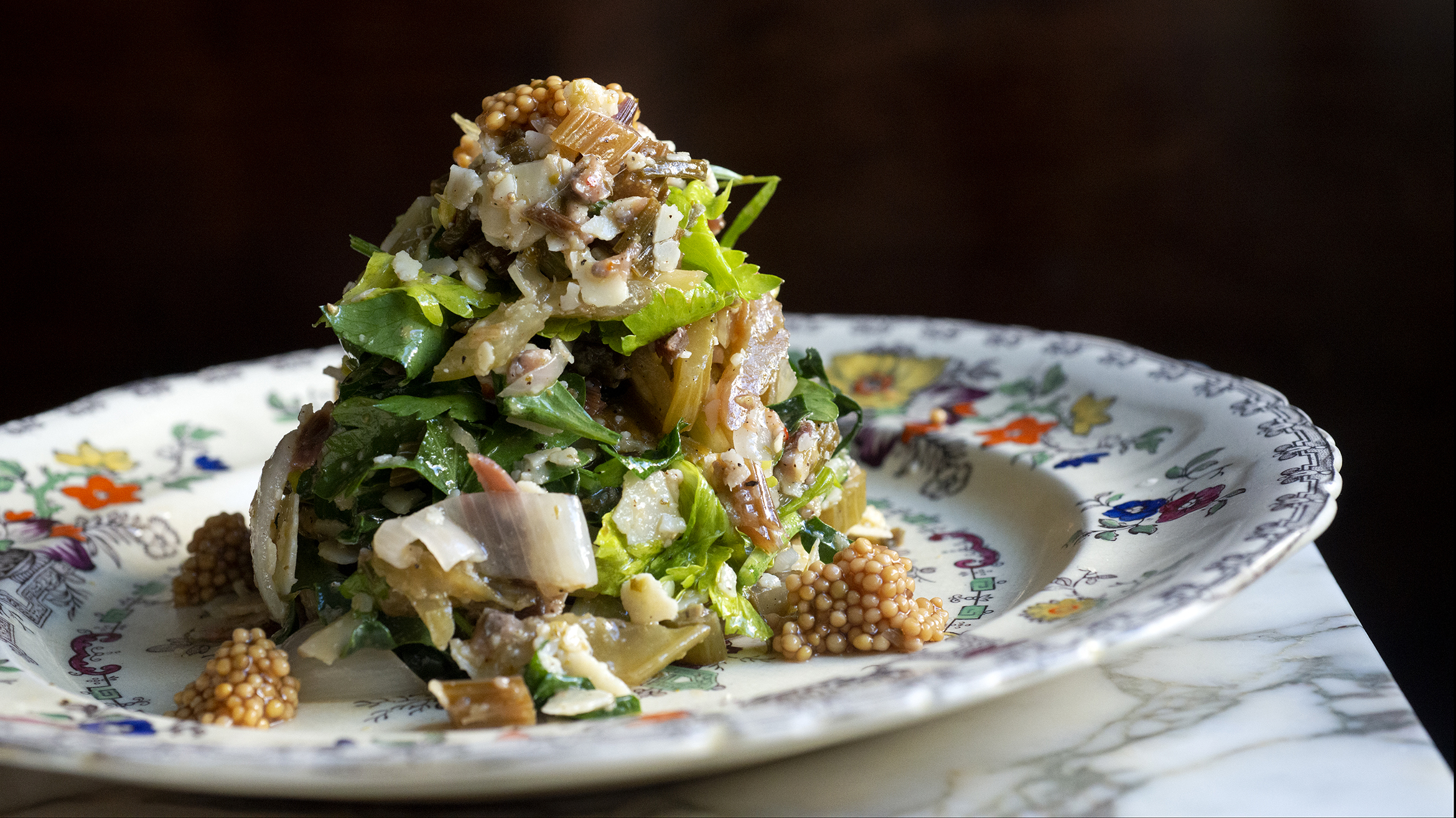 More than a hundred years later, the Celery Victor is still inspiring chefs. At Inga’s Bar in Brooklyn, New York, chef Tirzah Stashko brings the dish into Caesar salad territory. She constructs an emerald tower of braised celery tossed with assorted greens (recently broccoli spigarello), spring onions, anchovies, capers, pickled mustard seeds, and Parmesan cheese. “The salad is like seaweed—it’s savory, briny, and has umami. The pickled mustard seeds give it an extra pop,” Stashko says. She admits that “limp, chopped-up celery on a plate isn’t as appealing,” so she keeps her stalks whole when braised in a concentrated court bouillon flavored with salt, spices, white wine, mirepoix, bouquet garni, and lots of lemon. For extra visual impact, she uses a red heirloom celery variety called Giant Red from California, in combination with the regular green kind you’d find in a supermarket.

Without the addition of fat and other flavors, celery itself can be undervalued as a waterlogged stalk, admits Julia Sherman of Salad for President. Her second cookbook, Arty Parties, upgrades the vegetable from side dish to main with a Warm Braised Celery Vinaigrette topped with the salty, creamy, and piquant trifecta of capers, soft eggs, and boquerones. Sherman’s love of celery arrived in the way it does for many American children: via ants on a log. She still admits to eating the tubelike stalks filled with peanut butter and dotted with raisins once or twice a week. “I love all the cheap vegetables that people don’t think of as the main course,” Sherman quips. She relegates those last little bits of old celery in the fridge that aren’t quite crunchy enough to eat raw anymore for the aforementioned braise.

Sherman puts the often-overlooked celery leaves to use, too, following Chinese cuisine in treating them more as herb than vegetable. She’ll blitz them in a food processor with kosher salt for a neon green finishing salt to season a salad or even add to the rim of a cocktail glass.

“There’s also a difference in American versus Chinese celery [varietals], which tastes more herbaceous overall,” points out cookbook author Sarah Leung of The Woks of Life. “Chinese cooking sometimes uses [celery] like we’d use cilantro or scallions,” she says. But depending on where you are in China, celery is utilized in different ways. “The strong flavor [of celery] cuts through the richness and gaminess of lamb in northwestern Chinese lamb noodle soup, where the ingredient is more widely used than in the South,” Leung says. Her parents, both from Shanghai, didn’t encounter celery much until they moved to the United States. Here, Cantonese takeout chefs padded accessible American vegetables, celery included, to dishes like chop suey, chow mein, and vegetable moo shu.

For Leung, celery is the ideal foil to the richer meats used in dumpling fillings. “I grew up with my grandma making pork and celery dumplings,” she says, recalling that she always knew when Chinese celery was being used, as its thinner, more fibrous stalks hold more texture and flavor when cooked than American plants do. This might sound preferable, but for fillings, Leung wants the vegetables to practically melt. “The goal of any bun or bao (dumpling) filling is that it should be whipped into a paste, with no differentiation between meat and vegetable, just one juicy, succulent texture,” she says. To assure the celery properly cooks down, Leung suggests you “chop [the celery stalks] really finely crosswise so the fibers are broken up.” Softness doesn’t mean subdued, but when the expectation of celery has long been heard, it takes time to adjust to the quiet notes.