Get a free recipe
Subscribe
A Lifetime Getting Invited Into (And Kicked Out Of) the Kitchen
By: Rachel Wharton Illustration: Nick Hensley 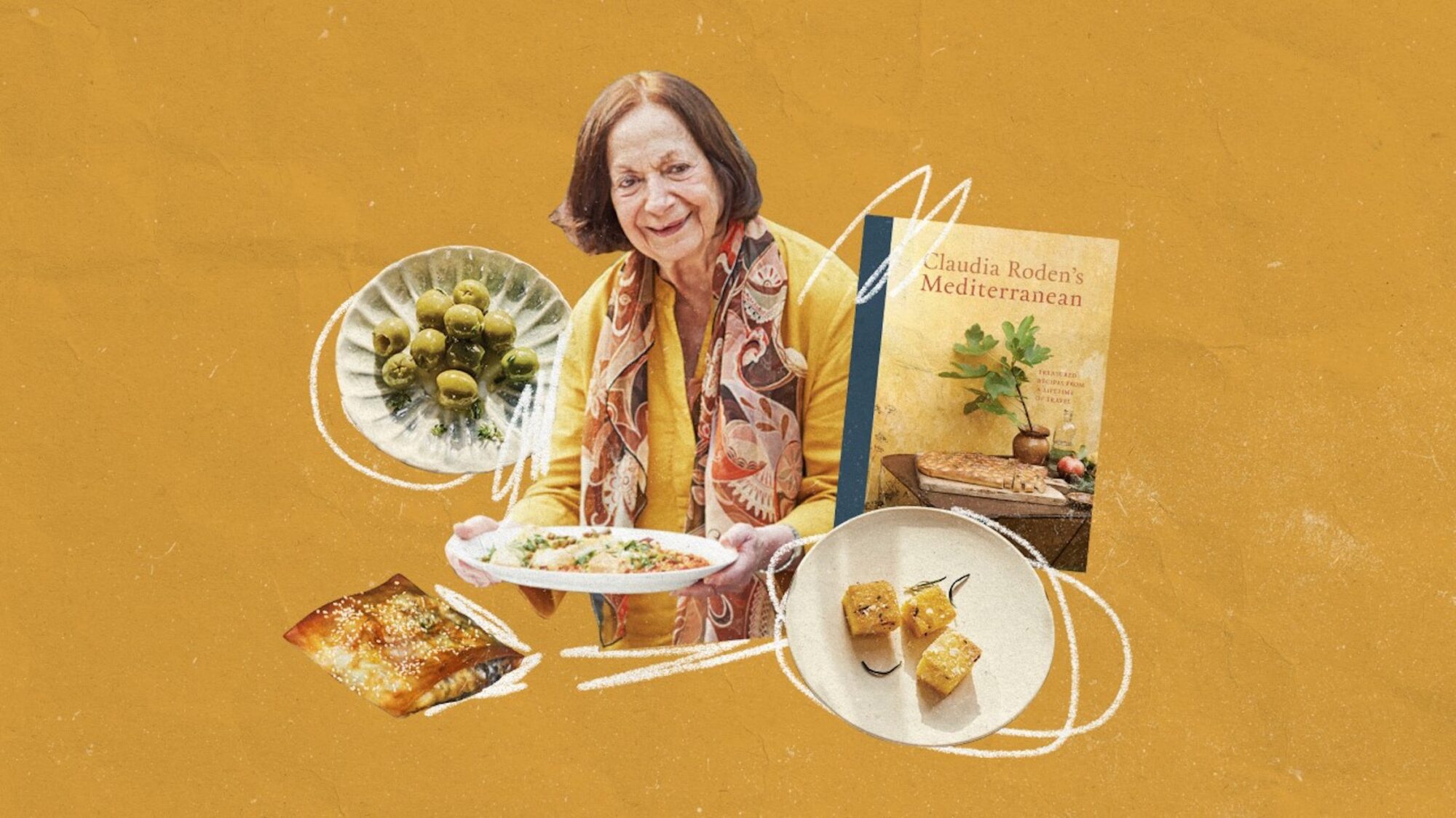 Claudia Roden has written nearly two dozen books about the cuisines of the Mediterranean and the Middle East, and she’s not slowing down anytime soon.

Claudia Roden has spent the past five decades as one of the UK’s most admired and most intrepid writers on food culture and cuisine. The 85-year-old has trekked solo up Sardinian mountains, lugged suitcases through sleepy villages along the Nile, dug through dusty library archives, and talked her way into foreign kitchens with a notebook in her hands. So there’s a sweet irony behind the exiled Egyptian’s brand new work, Claudia Roden’s Mediterranean: Treasured Recipes From a Lifetime of Travel. Unlike the rest of the Roden catalog—nearly two dozen books, mainly on the Mediterranean and the Middle East, from Italy and Spain to Morocco, Turkey, and Lebanon—she wrote this one entirely from home, where she was on pandemic lockdown for nearly all of last year.

In retrospect, her North London home was the perfect place to be. The 120 recipes in this book are not someone else’s traditions rigorously captured through weeks of field work, but rather 50 years of memories distilled into the dishes that bring her the most pleasure to cook. A simple red lentil soup with cumin and coriander; a roasted tomato and pepper salad with boiled lemon; a quick pasta with goat cheese, saffron, and grated orange zest—this is the type of cooking Roden is doing for her family and friends when they come over now. “I wasn’t going to spend hours doing stuffed vegetables anymore, or stuffed vine leaves, or tiny phyllo pies. No, not anymore,” Roden tells me. “It was a new stage in my life.”

In an interview earlier this fall by Zoom, Roden talked about enjoying that new stage of life, but she also recounted some of her best stories—and the tip that being in the kitchen with your source is the best way to gain their trust. While she knows that her days of lugging a suitcase across a continent for a recipe are long past, she also says this retrospective is far from the end of her work. “I can’t bear not doing something,” says Roden, who has mentioned a second volume of her own home cooking, or maybe a revisit of the Middle East. “And so I’ll have to do something,” she says, “but I don’t know what.”

This was the first book that was more your own memories from your own kitchen. Did you like that?
In the past, it really was strenuous to travel to research, because I try to get as much as I possibly could during a period of travel. I just didn’t stop. And so I decided, “What do I want to do now? What is it that makes me really happy? I’ve got my next years, however many I’ve got—I just want to enjoy them and I want to be happy. I decided that what I enjoy most is having people over, just a few in the kitchen, around my table. I cook for them, and we have a good time. Since I was 80, which was five years ago, I also decided that I would make that into a book—so as to have a challenge, and so that I keep doing it regularly, which meant every week, twice a week, whenever, just for my pleasure.

In the book, you talk about adopting a word an Italian chef taught you, fantasia—“the little personal touches that give real flavor.” Like the olive oil or chiles a cook decides to put on top of a dish.
I remember asking one chef, why do you think your food is special? What makes your food special, do you think? And he said—and he wasn’t the only one—“It’s my little fantasia.” And so I thought, well, now, when I’m doing this new book, this Mediterranean book, I’m not coming in with a whole big tradition where I have to stick absolutely to everything that I found that was traditional. I can do my own thing. I can put in my little fantasias.

Do people ask you for advice on how to do what you do for a living? They must always say, “How do I get to be you?” What do you tell them?
I said a long time ago that I ask everybody I meet—everybody—“What is your favorite food?” It’s also an opener to a friendship. Sometimes that is a friendship that lasted, for me, 40 years. A few have told me they’ve done the same thing, and it didn’t always work. There was one person—he couldn’t understand that you have to do it with a certain style. He was actually an anthropologist, so he went as an anthropologist to Morocco, and he went to the market, and he asked the market stall holders, “Can you give me a recipe?” And they didn’t. The thing is, well, the market stall holders wouldn’t have a recipe—you know, you have to guess who is going to be able to give you a recipe.

I think it helps to really be interested in the answers, too.
I think it also helped me to be a woman traveling alone, because it was more often women that I accosted on a train, for instance, or in a park, or on a bench—because it’s women who cook for their families. In those days, men didn’t, but now they do. But the women also weren’t used to being asked.

But what happened? I did sometimes get invited to lunch to see them cooking. Sometimes they’d say, “I’m on the train going somewhere—if you want, you can come.” Because I think I inspired trust, being a woman. They always asked me, “Where are your children?” No—it was, “Where is your husband?” Everywhere, people asked me, “Where’s your husband?”

What did you say?
I do remember when somebody did ask me, and I was thrown out of a place—I mentioned it in my book as well. In Sardinia, I went up to a hunting lodge on the top of a mountain, where they were hunting wild boars. At dinner time, I was the only woman, sitting alone at a small table. The only other table was one long table, with the men who were hunters. They were singing, and then they looked at me, and they said, “You want to join us?” And I said, “Yes!” I thought, then I’ll just ask them for their recipes, you know? I went and joined them, and then suddenly this woman came out, she was the manageress. She said, “Return to your table, and leave tomorrow morning.” And then in the morning, she asked me, “Don’t you have a husband?”

That’s funny.
I had another experience, quite different, in Egypt. I was there to give a seminar to a chefs’ association about Egyptian food. And I decided to go all across Egypt before the seminar, to find out what it is that I’ve missed from the villages, from the small towns—so that that they could have those things on their menu. I arrived in this village, a very poor village. I was so fascinated, just walking around, and a woman came out of her house. People were wondering, “Who is this walking around?” They didn’t have tourists normally. And so she just said, “Do you want to come and have a cup of tea?” And I went in, and she had a lentil soup, and I’ve got that lentil soup in the book. And then we were very silent, because she could see I struggled with my Arabic. And she suddenly asked me, “Where’s your husband?” And I just said, “Rah.” Rah means “he left.” And then I said, “Where’s yours?” And she said, with a very big smile, “Mat.” Mat means “he died.” I haven’t written this in the book, because my editor cut it out.

All these stories need to be saved somewhere!
They’re in my mind. For me, you know, this thing of researching food was a way of really getting intimate with a culture, with people. As I often say, the kitchen is an intimate place—much more intimate than if you’re entertained in the living room. When you sit in the living room, people are just polite, but nobody opens up. Nobody tells you their problems. So I did hear everybody’s problems, and I told them mine. 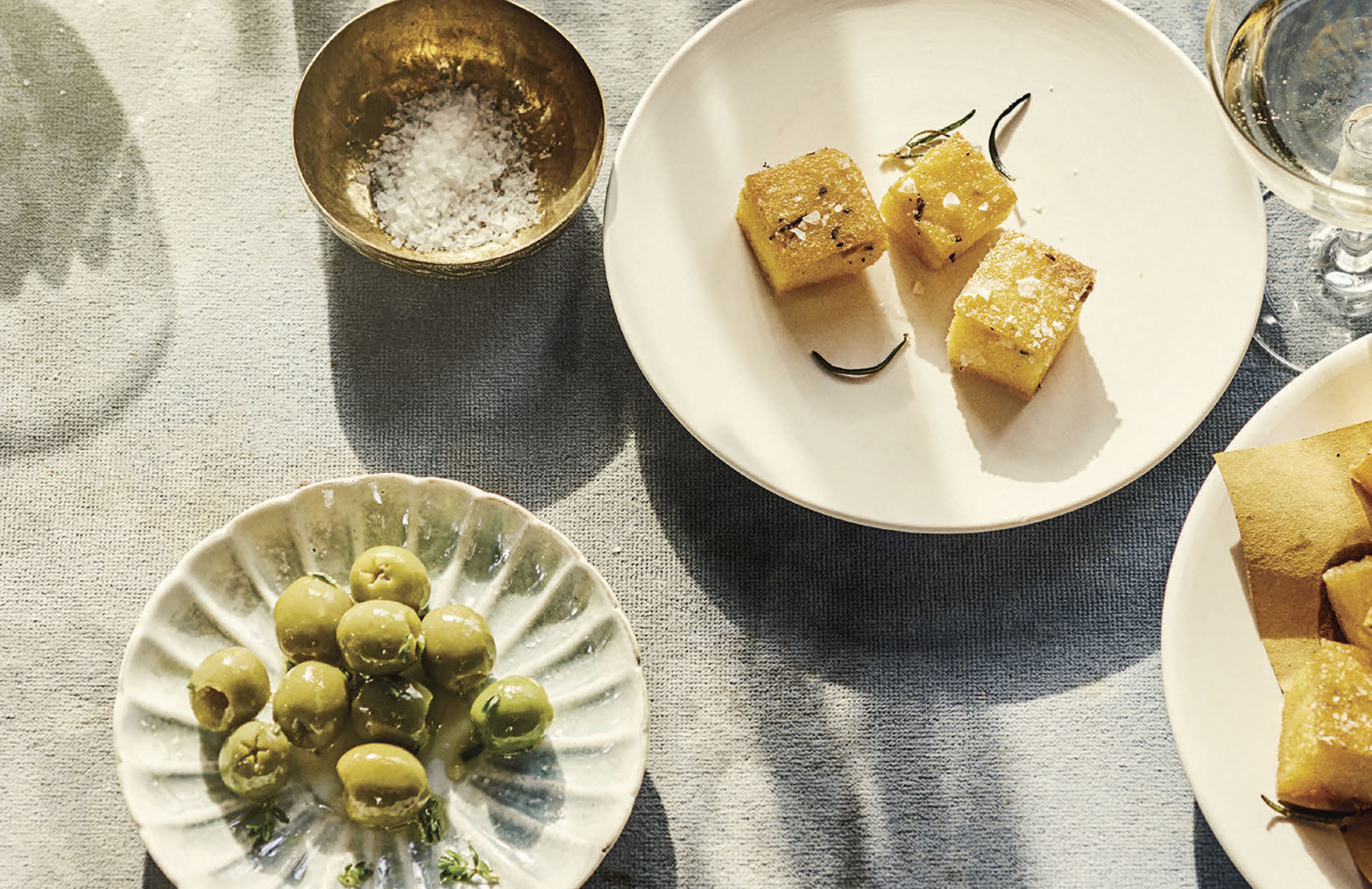 Roasted Cheese Polenta Cubes
Possibly the most ingenious way to serve polenta at a party.

Malloreddus al Caprino Fresco
The ridges of conch-shaped malloreddus pasta are a perfect match for soft goat cheese and plenty of citrus zest.