Get a free recipe
Subscribe
A Kimchi for Every Dish. A Knife Cut for Every Kimchi.
By: Matt Rodbard Illustration: Nick Hensley 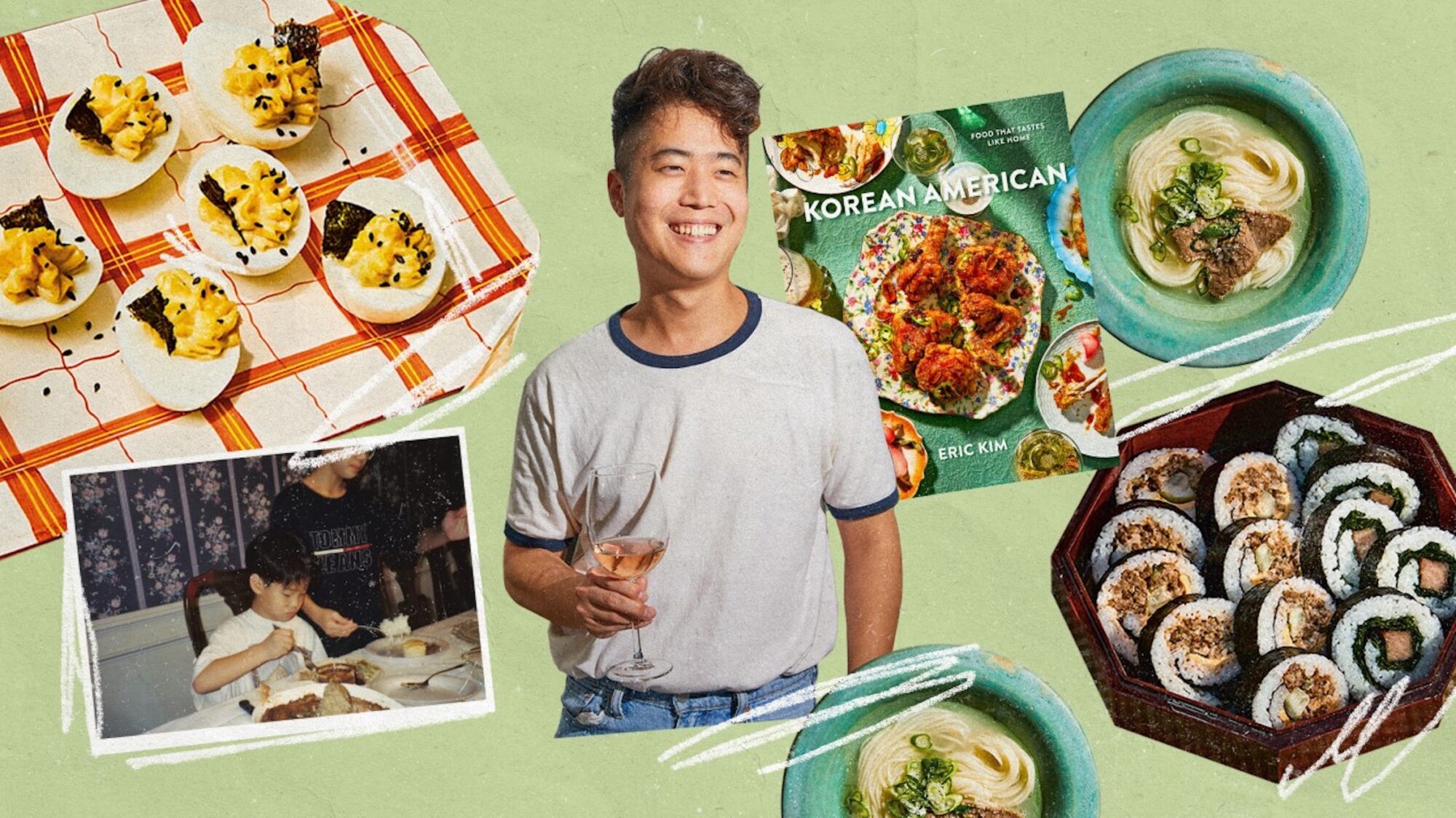 Eric Kim may be a columnist for the New York Times Magazine, but his mom, Jean, doesn’t pay much attention to food media. “She doesn’t give a shit about that,” Eric says, smiling, while we grab lunch at New York’s great Korean tofu restaurant Cho Dang Gol. We were talking about Jean’s idiosyncratic and perhaps not “correct” instruction for mincing garlic, a topic Kim covers, along with so many other nuggets of Jean’s wisdom, in his excellent new cookbook Korean American. Eric was raised in Atlanta by a first-generation Korean American family that embraced Korean home cooking with the vigor and singular focus that rises from the pages through the author’s stories like the smoke from a tabletop kalbi grill.

After attending college in New York City, Eric worked in various editorial roles at the Food Network and Food52 before landing a staff writing job at the New York Times. While the essay format is truly Eric’s calling, his recipe writing shouldn’t be slept on—which is proven through the book’s tributes to Korean classics like doenjang jjigae and kimchi bibimgukso, as well as his ingenious use of the sheet pan for both japchae and bibimbap. This goes along with the hybridized Korean American cooking the book offers, like cheesy corn and ranch pizza and cheeseburger kimbap.

Biased as I may be, as someone who writes about Korean food, I’ll just say that this book is hands down one of the finest and most urgent expressions of Korean home cooking in America I’ve ever read. It’s a must-read—and must-cook—and I was excited to eat a bowl of CDG’s kongbiji jjigae while the author answered my questions about Atlanta, Korean restaurants as time machines, “Korean Korean food,” and the problem with developing recipes with bodega doenjang.

What do you want readers to learn about you from the book? I ask because I feel like people know you a bit from social media and from your Times writing, which is autobiographical and so cool. But what do you want them to take away from Korean American?
I want people to see how someone who didn’t go to culinary school and who didn’t necessarily get brought up in restaurants can still write about food with authority. I think there’s a little bit of classism in regard to restaurant chefs versus home cooks. This book is a home cooking book; it’s a celebration of home cooking. I want people to learn from my mother. And I want them to learn from the tricks that I’ve developed as well as a cook, because those are tricks that only happen at the stove and at home. They’re really weird, quirky idiosyncrasies that a restaurant chef wouldn’t have learned in culinary school, which teaches you a specific way to do something. I love breaking the rules.

You’re the one—you’re going to write something amazing about doenjang. I can feel it.
I think I’ve cooked with doenjang enough in various applications where I know how to talk about it now. I think that’s the point. I didn’t know how to talk about it, because there are no words in English to describe that taste. It’s so hard to describe without saying, “I don’t know, it tastes like doenjang.”

I think it tastes like Parmesan. Like a very, very old, 24 to 36–month Parmesan. To me, that’s what doenjang is.
I like that. But you know what I’m saying? You can’t describe it without relating it to something else. You don’t want to say, “It’s kind of like miso.”

Have you been to a doenjang farm?
No. But my grandma used to make it in our backyard. I totally took that for granted. Homemade doenjang tastes really different. It’s just less salty and more pure. And doenjang is pure; it’s like salt, soybeans, and that’s it.

“When you pander to a whiter audience, the food gets worse.”

What about the brown plastic tub you find at a bodega or H Mart? It’s not bad, but it’s different.
And that’s frustrating, because I developed the doenjang recipes in the book with my mom’s really fancy homemade doenjang that she got from a church friend, and you know, I did cross-test with shitty doenjang, but it’s not the same, so you have to add different kinds of tasting notes. You really need to taste at the end. And that’s tough because you want people to know what it tastes like, but it’s hard to tell people what to look for when they’ve never had it.

I want to get your take on the idea of the Korean restaurant as a time warp. I feel like I’ve written about this quite a bit, and you write about it in your book, about Koreatowns in America. This is maybe not as much the case now, but definitely in the ’90s and 2000s, Koreatowns were definitely a time warp and a real time capsule. Is that changing at all?
I think it’s definitely changing. But one thing I have noticed, just as an example, is that Atlanta Koreatown food is way better than Manhattan Koreatown food, except at places like Cho Dong Gol. 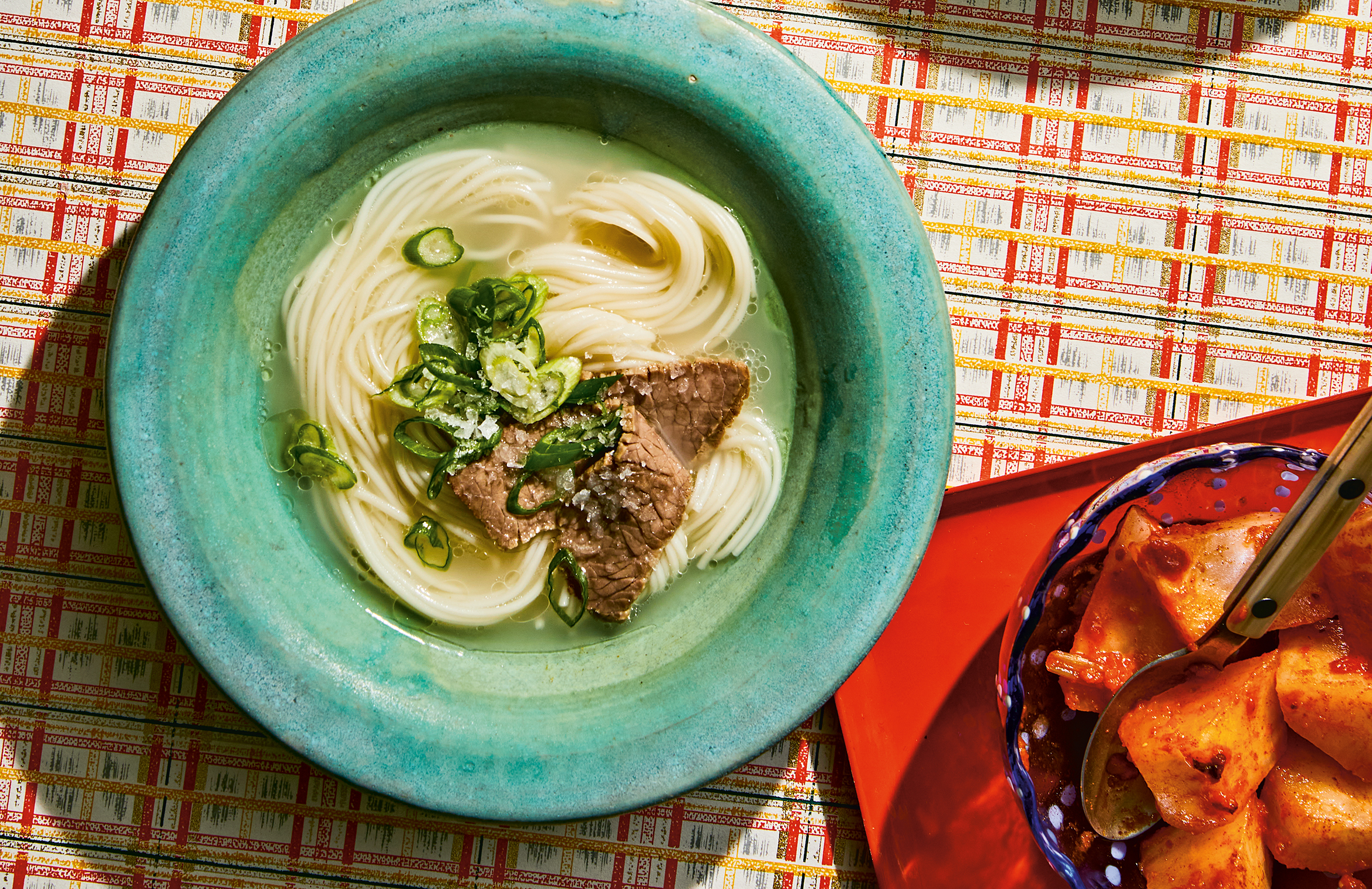 I fully agree with you.
It’s because I think the Atlanta Korean food is made for the Korean people in Atlanta, and it’s a time warp because they immigrated there in the ’80s or ’90s, and they brought the food over with them that was popular around then. But in Manhattan it kind of feels like a lot of the restaurants are not for Koreans. Whereas if you go to Flushing or Jersey, you’d get some more Korean Korean food. I’m not even saying it has to be more authentic, I just mean that when you pander to a whiter audience, the food gets worse. It gets more diluted, and it’s not the kind of Korean food I like. But maybe I’m incredibly biased, because I grew up with this kind of thing, and I grew up with the Korean food in Atlanta. I like a place like Cho Dang Gol because they never change. It’s always solid. It tastes like mom food. And all the servers are my mom’s age, and they’re all really nice and sweet.

What is the one Korean American recipe that you hope breaks out?
I have a favorite that I hope will, but I don’t think it will—the seolleongtang noodles. Seolleongtang is one of my favorite dishes. It’s also really easy to make. It takes a long time. It’s water and bones and salt and scallions. I love that because there’s a scallion gremolata that’s just grated garlic with scallion and flaky sea salt. And it seems like nothing, but the experience of eating that is great, because the flaky sea salt gets caught in the scallions, and they don’t melt, so when you’re eating the soup, the brothy noodles, the salt kind of hits your tongue later. I love that scallion gremolata because it’s so unassuming.

Speaking of seolleongtang, I love that you have dish-specific kimchis. You have a naengmyeon kimchi, and you have a seolleongtang kimchi. I’m sure there are plenty of books out there, but I’ve not read kimchis framed in that way. That was really smart.
Those were fun because they show Jean’s quirky brain. The knife cuts are really hard—they were hard to document. But they’re really delicious, and so if you get them right, it’s tasty. It’s like the technique is as important as the ingredient list. Jean would call it naengmyeon kimchi, and I’d Google it and be like, “Mom, that doesn’t exist.” And she’d be like, “No, no, it’s like a kimchi with your naengmyeon.” And I was like, “I don’t think that’s what people call it; we’ll call it that.” And stuff like that. You know, it’s just radish kimchi, but it’s a little sweeter, it’s different. 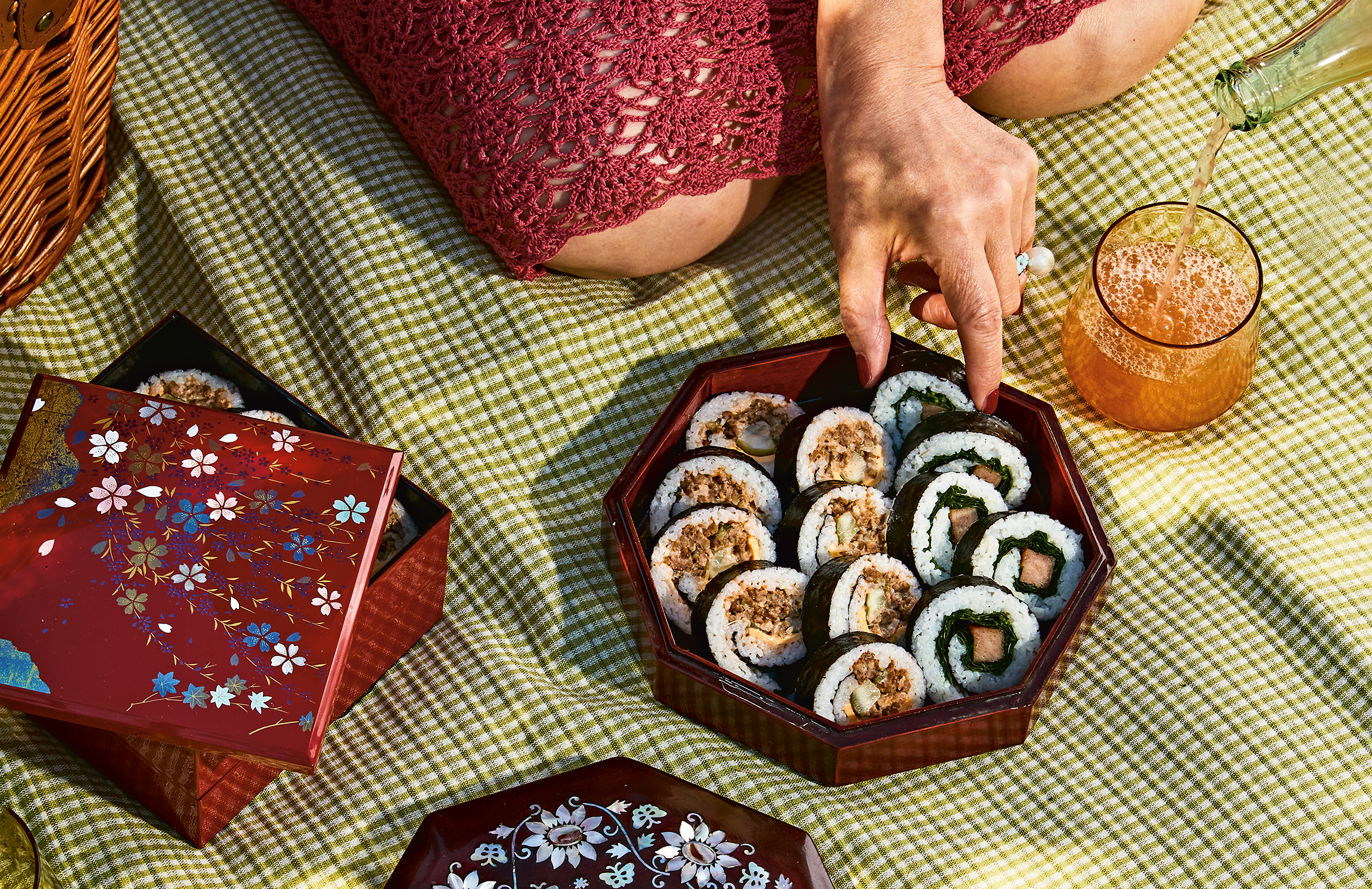 Seolleongtang Noodles with Scallion Gremolata
The milky, rich oxbone soup seolleongtang is a sought-after dish in many Koreatowns. Here, the author uses less broth and more noodles in a recipe fit for a hearty appetite.

Cheeseburger Kimbap
Though you need the cheese and burger for this to be a cheeseburger kimbap proper, the true key to that nostalgic taste exists within the mayochup (mayonnaise and ketchup), raw onion, and pickle (lots of it).

Sesame-Soy Deviled Eggs
These eggs took gyeranbap, or egg rice, and turned it into a single party bite: salty from soy sauce, nutty from sesame oil, and full of deep savoriness from the roasted seaweed.