Get a free recipe
Subscribe
You’re Invited to Join the Cult of Dace
By: Leela Punyaratabandhu Photos: Alexa Bendek 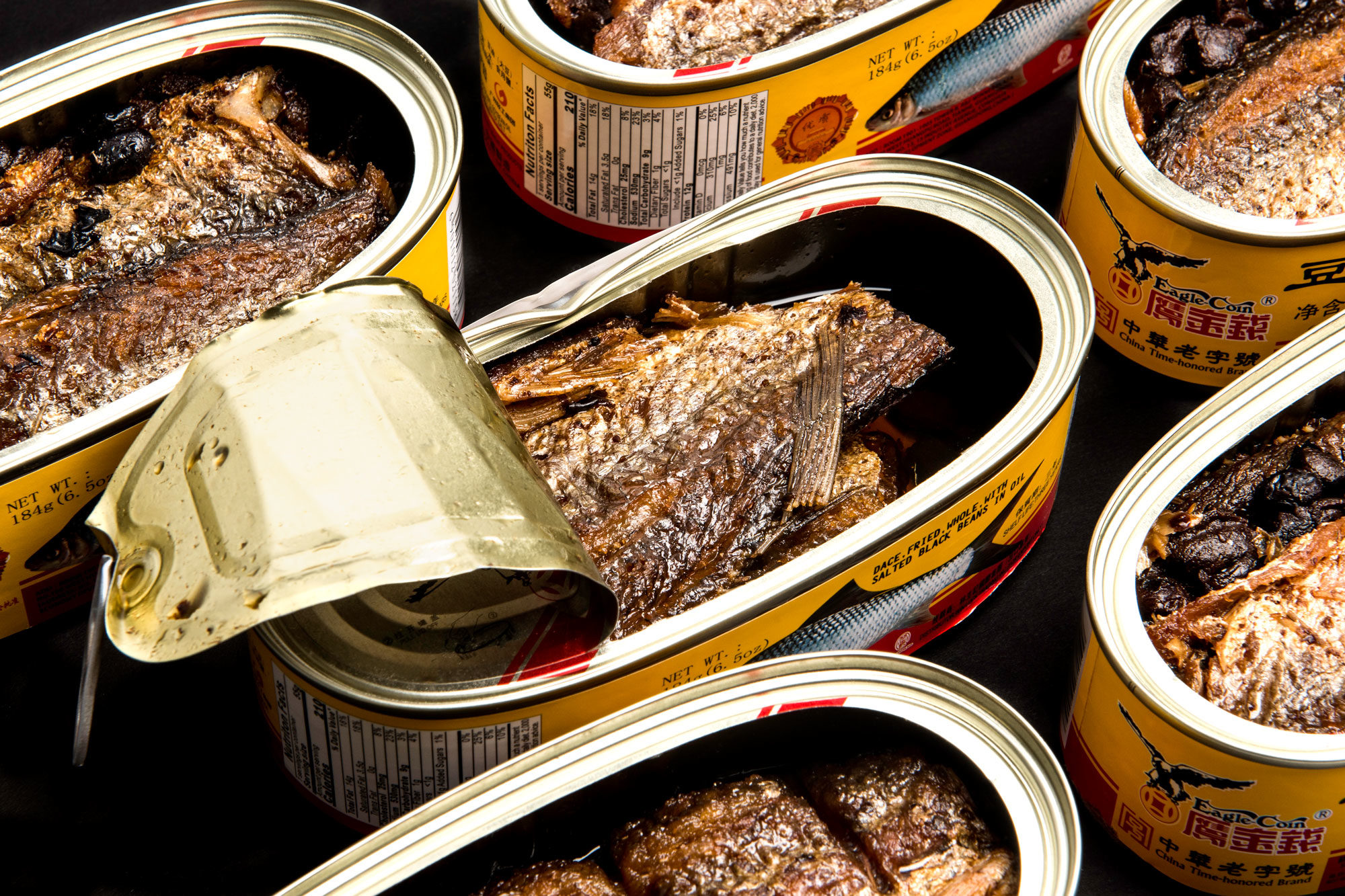 Like Spam, this fried fish bathed in black bean sauce is hard to replicate and often eaten straight from the can.

An old Thai comedy novella depicts a scene of a destitute family eating at a round table. Having recently fallen on hard times, they each have before them a bowl of rice gruel—a handful of broken grains bought cheap and stretched using copious water and deposited into a cauldron of insipid mush. Hanging from the ceiling at eye level is a tiny piece of fried salted fish. It’s there to be looked at, not eaten, say the parents to the seven kids, instructing them to take a bite of the bland rice and mentally season it with a quick glance at the salty fish. Trying to come to terms with their impoverishment, the family eats in morose silence until the father, disturbed by the teenage son’s sustained, longing gaze at the fish, bursts out, “Don’t stare too long, dammit—it’s salty!”

The story resonated with me most when I was a new international student studying in Chicago, and I quickly realized upon my arrival from Thailand how difficult it was to eat well in an expensive city where a blue-plate special at the school cafeteria cost the same as ten hefty bowls of noodles in my hometown of Bangkok. By the afternoon of my first day, when I found out my monthly food budget was about how much my landlord spent in a week on his dog’s organic kibbles, a part of me just wanted to go stare at some salty fish.

The anxiety stemming from the precarious state of my finance, and having found out for the first time that I was capable of feeling envy for an innocent golden retriever, brought a fierce creature out of me. Hawkeyed and with my senses on alert, I was pacing the canned-food aisle of one of the many Asian grocery stores in the heart of the Southeast Asian enclave in the city’s Uptown neighborhood. While hunting for something inexpensive yet deeply flavorful to eat with rice, I saw something I’d never noticed before: canned fried dace with salted black beans.

In theory, the can, with its unusual oval shape and its label in strikingly bright canary and crimson, should have turned me off, as scientists postulate that the conspicuous coloration in prey animals has evolved to deter predators who associate it with unpalatability and other aversive attributes. But what scientists don’t know is that when a predator is broke enough, and the prey is cheap enough—shy of $2, in this case—that theory crumbles. Besides, the fried dace seemed popular; there was only one can left on the shelf. As I reached for the lone can, a stranger behind me whispered in a mixture of Chinese and Lao, “Ah, dou chi ling yu—an Asian best-kept secret.” I don’t know if it was that comment delivered in a near-prophetic baritone, or if it was the Baader–Meinhof thing at work, but suddenly I started spotting it in nearly every Asian shopper’s cart. This really is an Asian secret so well kept that even some Asians, like me, don’t know it exists.

I came back to my apartment, cooked up some rice, opened the can, and marveled at the sight of fried dace (pronounced deɪs)—a type of freshwater carp—briny with a bit of chew, their bones so tiny and tender you can eat them. The dace came swimming in a pool of oil bedecked with the main seasoning: fermented whole black beans, an umami powerhouse—politely pungent and soft enough to mash with a spoon. And the oil—oh, the oil. I could have drizzled it over plain rice and called it a good meal. I emptied the whole can right into my rice bowl. I took a bite. The cherubim sang.

In the days that followed, I went back for more, and it was all I ate. I couldn’t stop. With the cans being so affordable, my bank account was safe. My self-control, though, was in jeopardy. Hoodwinked by my pride into thinking I would never become an addict, I turned into Icarus, flying closer and closer to the sun, one wiped-clean can of fried dace at a time.

People talk about instant ramen being the most loved Asian product worldwide. Yet long before instant ramen showed its squiggly face on the food scene and got all smug about being the most popular Asian export, the Asian diaspora in the West ran on fried dace, produced since the late 1800s in the southern Chinese province of Guangdong, and they’ve passed that love on to second- and third-generation Asian Americans.

Why is fried dace with salted black beans so addictive? “It’s the umami,” says Fuchsia Dunlop, author of Land of Fish and Rice, who is also a fan of this Cantonese dish. “You’ve got fish and fermented black beans together in oil—an intensely savory combination.”

The synergy of the three components may explain the addictiveness, but Los Angeles–based food writer Jean Trinh thinks the black beans play the lead role in this ensemble. There’s more to this game than the brininess and the funk. “If you notice, the black beans have a bit of a burnt taste to them, which I love,” says Trinh, comparing that to the smokiness of barbecued burnt ends. And this is why the variation of the same product that comes with no salted black beans is, to put it elegantly, meh.

But glorification aside, we’re still talking about a processed food here, and that was why I had to work hard at overcoming my addiction early on. Kian Lam Kho, author of Phoenix Claws and Jade Trees, hypothesizes that you can replicate the product from scratch at home by deep-frying some dace fish, which are sold fresh or frozen at some large Asian grocery stores (American butterfish would work, too), until crisp to the bones, steaming them with ginger, garlic, and salted black beans, then covering them with oil as a way to preserve them, confit-style. Yet this could all be a futile attempt. “It’s like Spam—you like it the way it comes out of a can,” says Kho. “You could try to make Spam at home, and it could be healthier, but you know it won’t be the same.”

Leela Punyaratabandhu is the author of Simple Thai Food and winner of the Art of Eating Prize, Bangkok. Epicurious has named her one of the 100 greatest home cooks of all time.