Get a free recipe
Subscribe
Your Favorite Classic Cocktails Are More Modern Than You Think
By: Ashley Rodriguez Illustration: Nick Hensley 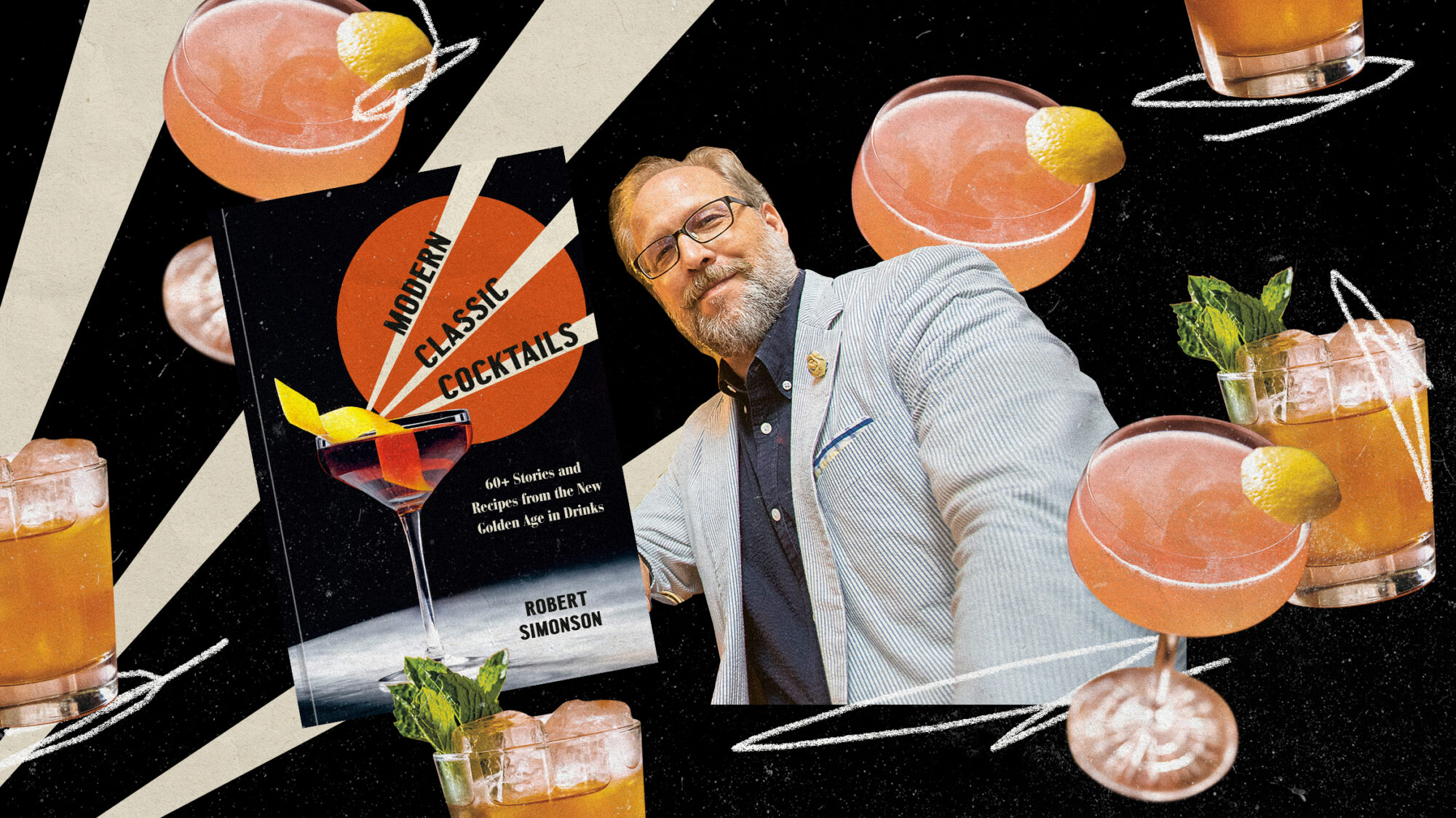 As I chatted with Robert Simonson, I told him about the best cocktail I’ve ever had in New York, a drink I lamented not being able to remember. “It had sherry . . . and I think two other ingredients,” I told him. He quickly asked me if it was served up (chilled but served in a glass without ice) or if other ingredients, like Cynar (an Italian aperitif made from artichokes) and gin, sounded familiar. “It’s called ‘Remember the Alimony.’”

If you’re in need of a cocktail detective, call Simonson. He’s been writing about cocktails, spirits, and bar culture for more than 15 years, with work in outlets like the New York Times, Imbibe Magazine, and PUNCH. He’s written multiple books about cocktails, including The Old-Fashioned, the first book of its kind to focus on one drink, and The Martini Cocktail.

Simonson’s single-drink books reiterate that the full histories of these cocktails are often obscured, the exact details lost to time. But in his newest book, Modern Classic Cocktails, Simonson locks down the origin stories of 60-plus modern drinks—cocktails that catapulted to classic status during the deceptively brief cocktail revolution of the late 2000s and early 2010s, when cocktail bars rose to a level of prominence not seen since pre-Prohibition days, thanks to bartenders dusting off old recipes and experimenting with new spirits.

In the book, which offers recipes and some reported journeys, the author interviewed many of the drink creators and cocktail namesakes—some of whom were surprised to learn that there were wildly popular drinks named after them. After devouring his book in a single sitting, I chatted on the phone with Simonson about the stories and recipes that comprise the modern drink revolution.

My favorite term in the book is “Mr. Potato Head School of Mixology.” What does that mean?
Phil Ward, of Death & Co and Mayahuel, came up with that. He didn’t name it—somebody else did—but it’s the simplest way to create a new cocktail: Use an old cocktail recipe as a base, and replace a key component with a different ingredient.

Take Cynar, for example, an amaro made from artichoke. Bartenders were just rediscovering it, and it made a nice substitute for other bitter liqueurs. Take the bitter liqueur out, replace it with Cynar, and you have a brand-new drink.

That seems easy, but you also point out how many cocktail combinations aren’t obvious, even if they might seem so now. What do you think it takes to riff on an old drink to make a new classic?
I believe it was Katie Stipe who said that about her cocktail, the Siesta, which was a spin on the Hemingway Daiquiri that substituted tequila and Campari for rum and maraschino liqueur.

You have to put yourself back 15 years and try to imagine that era of discovery when all these things seemed possible. A lot of these drinks we’re used to now seem simple, but they weren’t easy to imagine back then. You had to have a mind that knew classic cocktails, knew their ratios, their proportions, and could take that knowledge and apply it to a new set of ingredients. All these cocktails were eureka moments once upon a time.

Your book includes recipes for over 60 cocktails, but I wouldn’t describe it as a recipe book. It seems more like a catalog chronicling a very particular moment in time: the early aughts cocktail revival. It’s almost like an oral history.
Yes, you’re exactly right. That’s exactly what I intended. I wanted to record these drinks because I didn’t want history to be lost.

There are recipes in the book—I think if somebody wrote a cocktail book and didn’t put cocktail recipes in it, there’d probably be a riot. But it’s important to me that the history was there. Part of what I’ve been doing for the past 16 years is trying to get cocktail history right: sorting through all the myths and legends and finding out what was fact.

We’re still in the cocktail revival, so there’s no reason why we can’t put this down in black and white and leave a clear record for the generations to come. Most of the people who invented these drinks are still with us, so I was able to go directly to them and find out the exact story and the exact recipes. For most of these cocktails, if you look online, you’ll find a lot of different recipes, so you’ll wonder which one’s the right one. These are the right ones.

All these cocktails were eureka moments once upon a time.

It’s exciting to know that readers can create the cocktails in your book exactly as the inventor of the drink intended.
It is exciting. When you look back at the really old classics, like the Martini and the Manhattan and the Old-Fashioned, we don’t really know how these cocktails came to be. We can dig and search, but we’re never gonna get to the bottom of it, because nobody wrote it down and there was no internet, so many of these tales are lost to time. There’s no reason why that should be the case today.

As you mentioned, we’re still in the midst of the cocktail revival, but you also note that the heyday of this movement ended in 2017, and that most of the cocktails you discussed were invented in a very narrow window: between 2007 and 2012, with many of the drinks coming out in 2008 and 2009. Why is this history so narrow?
Cocktails got integrated very quickly into menus and bar programs, and the cocktail revival rose at the same time as the internet and social media. It was easy for bartenders in different parts of the country, different parts of the world, to communicate and share information. People had their phones and could text and send pictures to one another of new drinks, so if something important was happening in New York, people in Seattle and Australia, in England and Germany, could pick it up easily.

I used to say that every year in the cocktail revival was like a dog year. It felt like every year was the equivalent of seven years, with how much activity and progress was going on. Literally thousands of cocktails were being created, and all these new products were coming onto the market. With things moving so quickly, you’re going to come to the end pretty quickly.

I don’t want that to sound negative. The fact that the heyday is over is because it’s been fully ingrained into food and drink culture. You can go into most restaurants and bars, and there’s gonna be some evidence of the cocktail revival. Either the back bar has better quality bottles, or you’ll see some of the modern classics on the menu. But 15 years ago, you’d be lucky if there was a Manhattan on the menu.

You talked to or tracked down many of the creators or sources of the drinks in the book. Was anyone surprised to be part of cocktail history?
The funniest story has to do with the Jasmine cocktail. Paul Harrington created this cocktail—gin, lemon juice, Cointreau, Campari, and a lemon twist—for a patron named Matt Jasmine. He named it after him, and Matt went on his merry way.

The cocktail has been around for 30 years, and it’s gotten really popular. When I tracked Matt down, he had no idea. He had that drink once that night, and he never had it again. He said, “I guess I don’t appreciate it as much as I should. I think I’ll start asking for it the next time I’m at a bar.”

At the end of the book, you mention that you’re waiting for someone to name a drink after you. What would your cocktail have?
Hah! I would hope it has either gin or rye, which are the two liquors that go away most quickly in my house. I hope it would be simple to build—something that people can make at home.