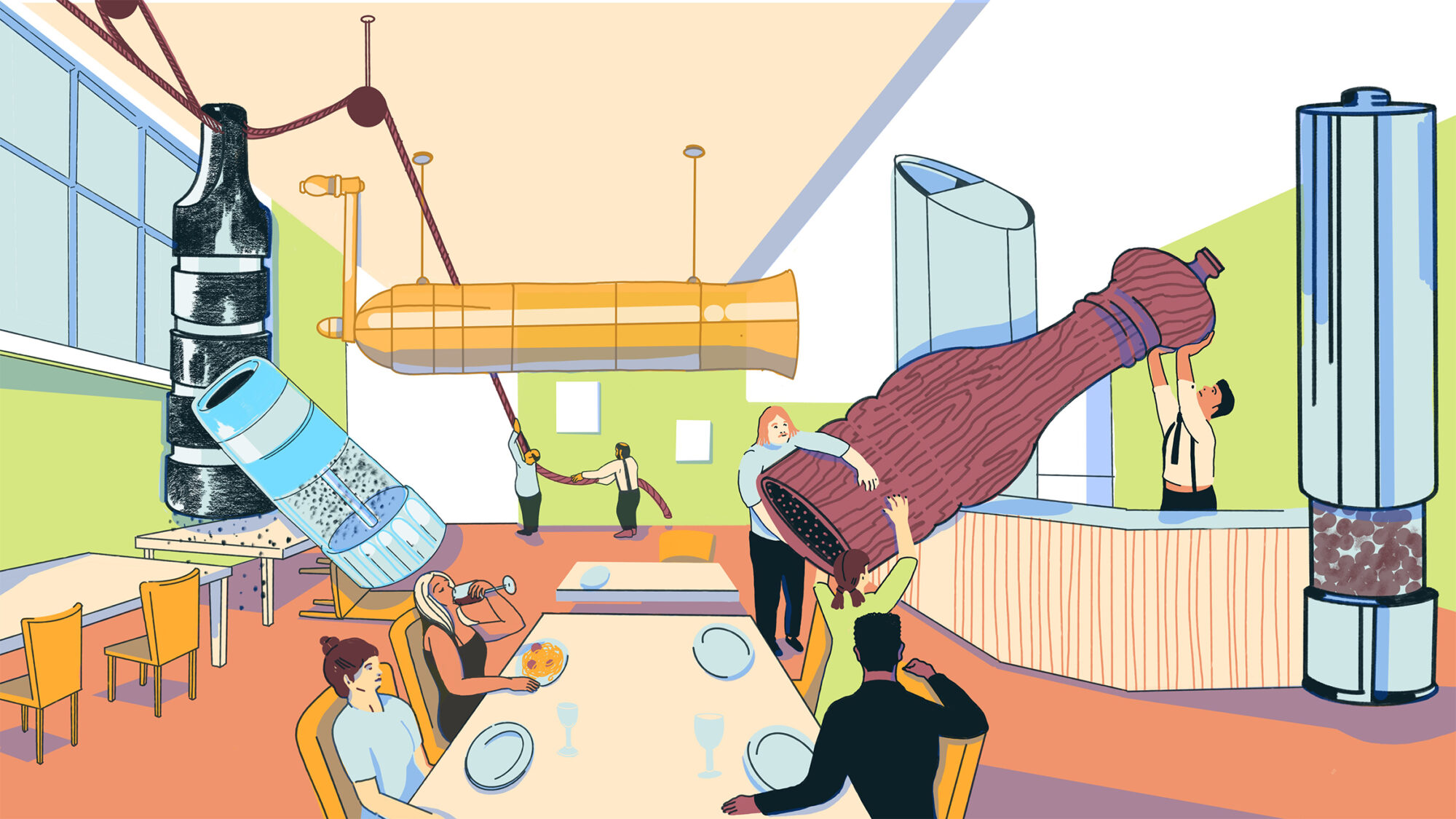 The phrase, and the gesture that followed, was once the sign of fine dining at its finest. Until it wasn’t.

You know the drill. You’re at a restaurant. The server presents your plate and disappears. A moment passes. The server reappears, brandishing a pepper mill. “Freshly cracked pepper?” they ask expectantly, fingers poised to crank à la Adam Sandler in his deranged SNL “Pepper Boy” bit from 1994. From here, the choice is yours to accept or decline this touch of tableside theatricality—or is it hospitality?

The question of whether grinding fresh pepper on a finished dish—a crisp Caesar salad, a saucy noodle, a slab of grilled meat—is a gesture of sophistication, or a ghost of gauche culinary flair, is a deeply polarizing one. For some, it’s the ultimate tableside flourish, signaling hospitality at its most personal; others find it tacky, unnecessarily performative, and even offensive to a chef’s abilities to finish their food before sending it out.

The first pepper mill was likely invented by Peugeot in France in 1842, but the item didn’t take off with American diners until the middle of the 20th century. “Americans in the rising middle class in the 1950s and ’60s wanted to appear more sophisticated in accord with their country becoming a world power,” says Jan Whitaker, author of the blog Restaurant-ing Through History. “At the same time, industrial pre-prepared meals became more popular, and many restaurants were using all kinds of convenience foods. So it became more competitive to present little differences that signified quality—which, of course, meant borrowing from Europe,” she says.

French terms, garnishes like curly parsley, and Continental menus all started popping up in restaurants from Milwaukee to Miami. Tableside grinding became a way for servers to signal hospitality and earn their tips, as well as to prove their peppercorns were unadulterated—and, most important, freshly ground. By the mid-1960s, the mills themselves were being nicked from tables: a 1964 Time article on the rise of “doggie bags” notes that “All too frequently, complain restaurant owners, guests use doggie bags to haul off pilfered ashtrays, pepper mills, and silverware.” In a particularly American twist, grinders eventually fell victim to the “bigger is better” mentality, partially to discourage theft and partially to enhance the drama of the whole production. (RIP Nick DeGeorge Sr., aka “the man with an eight-foot pepper mill,” a flamboyant Dallas restaurateur who wheeled his massive grinder around on its own special cart.)

But at a certain point, in certain circles, pepper mills became passé.

Chefs, diners, and critics are split on the practice of tableside grinding. In a nine-paragraph screed in the New York Times in 2006, then restaurant critic Frank Bruni described it as “a ritual I’ve never understood, [a] routine that fills me with skepticism about the seriousness of a restaurant and the level-headedness of some of its patrons.” His chief argument was that if pepper is essential to the success of the dish, it should be added in the kitchen, and furthermore, that waiters offer it too soon into the meal, before diners have had a chance to taste their food and decide whether it would, in fact, benefit from more pepper. Perhaps his sentiment was reflective of a general shift in dining out at the time, moving away from the staid white-tablecloth model and toward more freewheeling, experimental cuisine in casual environs.

The complaint about timing is echoed by Lauren Shockey, the former restaurant critic at the Village Voice, who told me the practice was “utterly useless” until a diner has had a chance to actually taste their food. “Staff should allow you two bites (first to assess, second to confirm) and then give you an opportunity to add pepper,” she says. Some are opposed to the practice from a service perspective: “It’s one of those empty flourishes that always felt like a way to emphasize service was happening,” says Toronto restaurateur Jen Agg. Others are more blunt: “I hate it! Why can’t the chef season properly in the first place?” asks Portland-based food writer Martha Holmberg.

“The practice itself instantly identifies a restaurant as either dated or classic—which one [that is] only depends on the quality of the food.”

However, pepper grinding also has its supporters. “There’s a bit of a show,” says Kira Fisher, a digital strategist in New York who eats out frequently and tracks food trends for sport. “It feels personal to me when they do it to order—I say when it’s enough, and it’s nice to feel like someone is at my service.” Food writer Matthew Kronsberg echoes this sentiment, pointing out its unique role in performative service. “It’s not like a bartender will shake your drink until you say stop,” he says. Instead of suspicious, the pro–pepper mill diner feels they’re being catered to. “I assume that if the restaurant is asking me if I want additional pepper, it works with the dish, so I still feel like I’m at the hands of the chef,” says Fisher.

Often, the relevance of pepper, à la minute, is dictated by the type of restaurant in which the grinding goes down. “White tablecloth,” “red leather banquette,” and “Olive Garden” were words that came up frequently when I asked people to visualize restaurants with tableside pepper service. If the pepper grinding task itself is performative, so too is what it says about the establishment. “It’s not that I associate it with dated and silly food per se,” says Agg, “but that the practice itself instantly identifies a restaurant as either dated or classic—which one [that is] only depends on the quality of the food.” She makes one exception, however: freshly ground pepper atop a tableside Caesar. The implication is that perhaps two schticky acts are better that one.

As our collective palate evolves, so does our definition of sophistication. We have learned to appreciate cuisines from around the world, not just the grand kitchens of Europe. (It’s worth mentioning here that the “pungent, obtuse” flavor of pepper does not, in fact, complement every dish—it can overwhelm subtler herbaceous flavors and is often redundant when other capsicum peppers are present.) And as chefs take up more space in the public imagination, diners expect more from them—including perfectly seasoned food.

In the end, like so many things food-related, pepper is a matter of personal preference. The act of grinding pepper tableside is, in its purest form, a gesture, which is defined by Merriam-Webster as “a movement usually of the body or limbs that expresses or emphasizes an idea, sentiment, or attitude.” It’s less about the literal application of ground peppercorns and more about what the gesture of showering them upon your food represents to you as a diner. The choice is yours, after all.