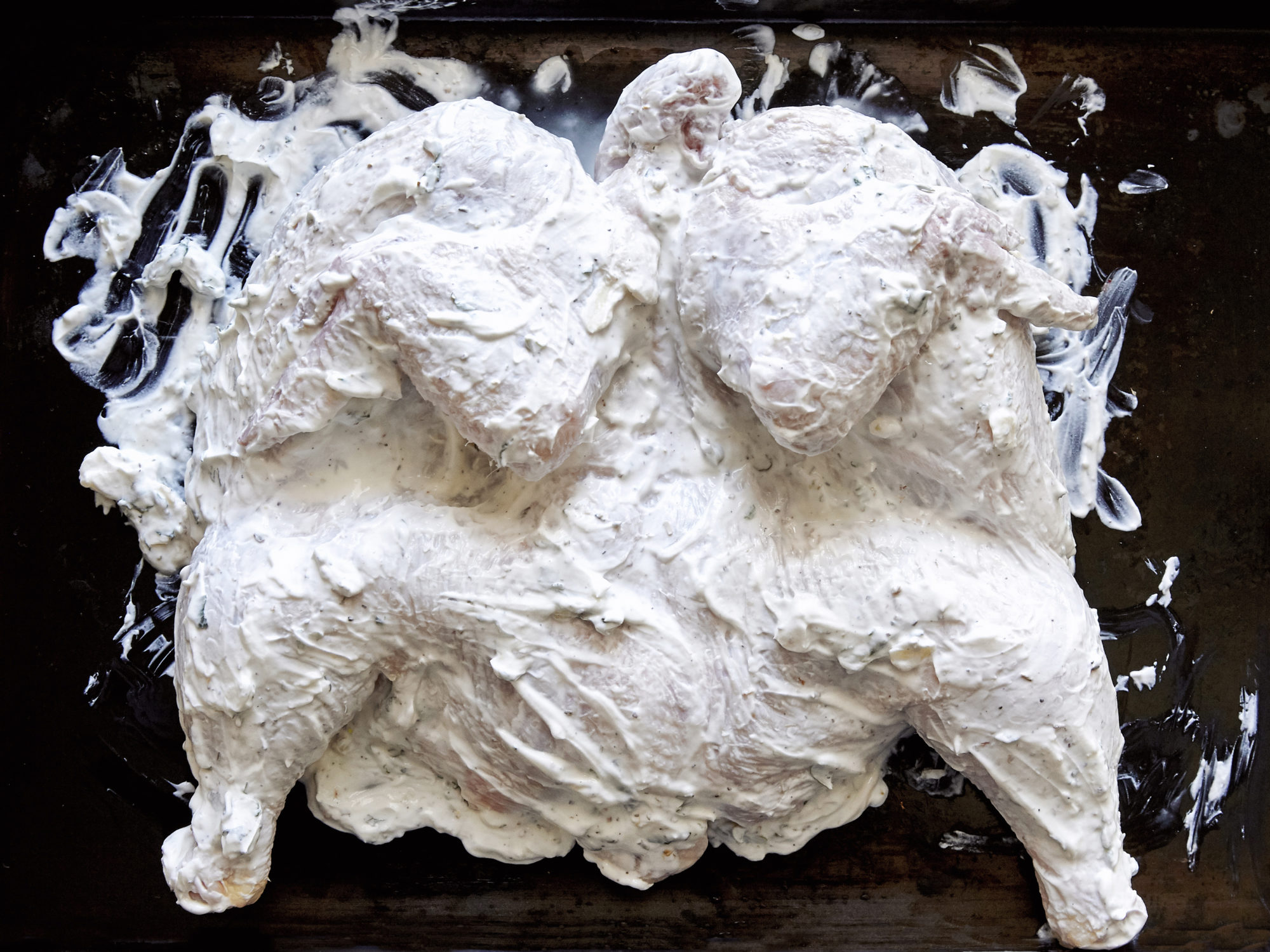 Forget buttermilk for a second. A soak in yogurt is great for lamb, beef, goat, and particularly chicken.

I thought this story might be a long and winding myth-buster about whether or not yogurt truly works as a marinade, but here’s the TLDR: It works. It works very well. A better story is: Why does it work, and what’s the best way to go about it?

Scientifically speaking, according to Arielle Johnson, a food scientist and the author of the forthcoming cookbook Flavorama, when you coat meat in yogurt (most agree that plain, whole-milk yogurt is the best bet), the lactic acid present breaks down the connective protein collagen and acidifies the muscle fibers. Translation: When cooked, the meat tastes more tender and juicy, with an incredibly desirable tang. It’s similar to what happens in a ceviche, with the acid in the lime juice effectively “cooking” the seafood.

It’s not entirely clear where, exactly, the yogurt-as-meat-marinade method was first discovered, but it likely happened somewhere in Central Asia, according to cookbook author Julie Sahni. It was a common practice during the Mongol Empire, which spanned the 13th and 14th centuries, to ferment mare’s milk (that would be from the horse) into yogurt and use this to marinate meat—particularly those cuts that had become old and tough.

Beyond adding tenderness and flavor, yogurt has other pretty unique superpowers, too. “It infiltrates the meat and builds this beautiful crust,” says Anissa Helou, a London-based cookbook author, about how yogurt-marinated meat, when cooked, can build a layer of caramelization. “This is much different than a marinade of olive oil and lemon juice.” According to Mary-Frances Heck, a cookbook author and senior food editor at Food & Wine, compared to other acidic marinades, like lime juice or vinegar, yogurt (with its higher pH level) is much more gentle and forgiving. “If you leave a chicken breast in red wine vinaigrette for two to three days, by the time you cook it, it will be jerky,” she says. From a practical perspective, Heck adds, yogurt can perform double duty in a recipe—you can use half of it to marinate the meat and the rest as a sauce or a side. You can even cook your meat in the yogurt marinade, Helou says—but to prevent curdling, make sure you are continually whisking the yogurt in the pot and not letting it come to a boil.

To get the most out of a yogurt marinade, the first rule is seasoning. Do add flavor to your yogurt, Helou says, not just with salt (please do not forget to salt your yogurt!), but with saffron, coriander, mint, or cumin. Yogurt is uniquely great for locking in seasonings because of its thickness. The herbs and spices get “suspended in the yogurt so they stay with the marinade rather than falling to the bottom,” Heck says. “You aren’t having to flip and turn to keep the marinade on the meat. The spices are going to stay right on the surface of the meat, and that is where you get the sizzle and the char and the tantalizing little bits.”

Second, Helou warns against caking the yogurt onto the meat—you want an even yogurt layer, but if there’s too much, it will stick to the grill or skillet, causing burning.

Beyond the plain yogurt varieties available in the grocery store, Helou suggests goat’s milk, because it has a “stronger flavor.” Sahni opts for the Indian-style yogurt available at Indian grocery stores like Patel Brothers, as it’s slightly more acidic. She also recommends straining your yogurt to maximize the tangy flavor in the meat, as the fat content becomes more concentrated.

So can you use yogurt on any kind of meat? The short answer is yes. Lamb, beef, goat—it’s pretty much all fair game. But Sahni believes you get the most bang for your buck with lean meats, like chicken, as yogurt adds a level of richness that’d be hard to achieve from the fat of the meat alone. The result is what she calls “peeling texture. You are making chicken that beautifully shreds.” Which got me thinking: Why isn’t it more common to use the yogurt marinade technique on fried chicken? Buttermilk is seen by many as the gold standard for most chicken-soaking methodologies. It has an acid content that’s comparable to yogurt, but it is also typically made with low-fat milk. So could substituting whole-milk yogurt for buttermilk yield a richer-tasting, better-textured fried chicken?

I put this theory to the test, using boneless, skinless chicken breasts (the leanest of poultry options available at the store). I set one batch to marinate in buttermilk, and another to bathe in the same amount of whole-milk Greek yogurt—both for about 18 hours. I dredged them in flour, fried them off, and to my great delight, BOOM! The yogurt was the clear winner. The buttermilk chicken was juicy, but also a bit rubbery. The crust got soggy over time. The yogurt version just had so much more flavor, with the tanginess really coming through. The crust was thick and maintained its crunch. The meat was juicy and tender the whole way through. It was like taking all of yogurt’s best qualities as a marinade and amplifying them.

So yes, marinating your meat in yogurt works. But marinating it and then frying it is otherworldly. Buttermilk fried chicken: so 2018.

RECIPE: Meshwi Lahm ‘ala Rozz: Roast Shoulder of Lamb on a Bed of Fragrant Rice