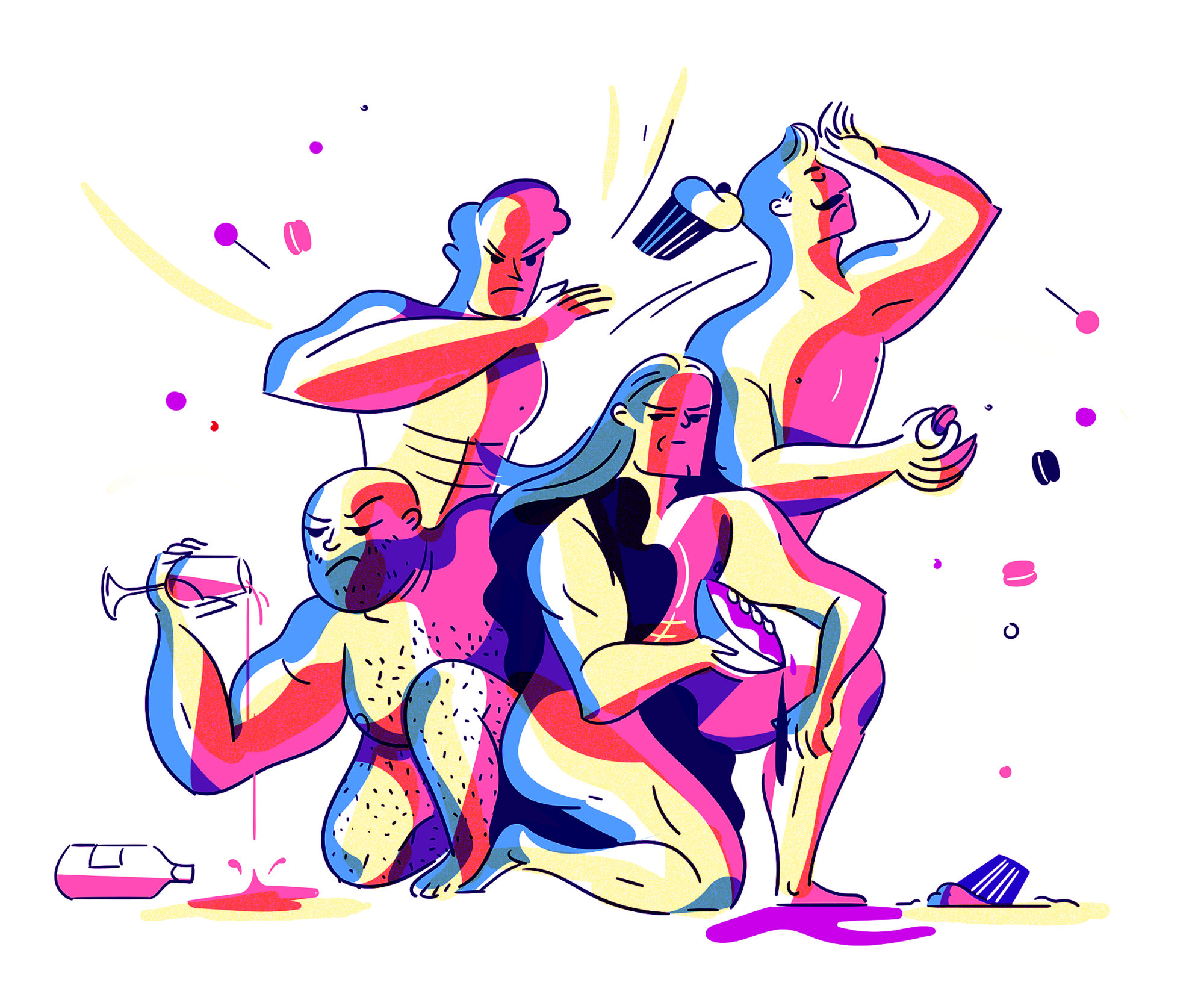 Why do we get so collectively annoyed by food and drink trends that we associate with women? Because it’s an ugly double standard.

Rosé, in case you hadn’t heard, is ruined. What was once just one of many wines to enjoy on a summer day is now a ubiquitous brand you have to either love or hate. And if you do enjoy rosé, you must now defend your taste against an onslaught of rosé gummies, rosé chocolate, rosé T-shirts, rosé gin, and, of course, frosé.

This isn’t the first time a pink beverage has been ruined, nor is it the first time a food or beverage has become so popular that it invites an inevitable backlash. This is how capitalism works: Consumers enjoy something, brands notice demand and turn the product into a lifestyle, and consumers dutifully recoil. But instead of being angry at the free market, the ire toward #rosé is directed at the population widely believed to be responsible for its downfall: women. It’s “lady petrol,” according to BBC host Jeremy Clarkson. It’s “exhausting,” according to Eater. It’s unsophisticated. It’s over.

It may be true that the rise of rosé is a women-driven trend, a fact that has led to a lot of unfortunate, gendered product names like “White Girl Rosé” and “Babe” and “Mommy’s Time Out.” But the backlash against it underscores a sad but not unexpected assumption when it comes to food trends (and really, all trends): When men enjoy something, they elevate it. But when women enjoy something, they ruin it.

When men buy into food trends, they bring much-needed attention and success to what they’re consuming. Some sommeliers rolled their eyes after Sideways made male wine drinkers everywhere drop their Merlots for Pinot Noirs, but nobody was accusing Pinot Noir of overstaying its welcome. And when men get into women’s trends, they elevate and legitimize them—or even create an entirely new market. Male rosé drinkers have transformed it from a wine “seen by serious wine drinkers as cloying, mass-produced swill, an object of revulsion and gendered disdain,” as GQ wrote, into something men are happy to be seen drinking. Yogurt, a neutral food if ever there were one, went from being feminized to being marketed as protein-rich workout fuel for men. And of course men don’t diet—they biohack. Any form or style of food or drink is, literally, a matter of taste. It is also all gender neutral, though that hasn’t stopped people from associating tofu and chocolate with women or bitter alcohols with men. Whether that’s because women do most of the buying, or because marketers have an insatiable appetite for turning human enjoyment into target-based profit, we wind up with things like chocolate bars that say they’re “not for girls.” “Women’s” foods tend to be sweet (cupcakes, macarons, wine coolers); thought of as healthy (yogurt, froyo, diet soda, smoothie bowls, salad) or otherwise “fussy” (unicorn lattes, pumpkin spice anything); and come in pink. “Men’s” foods tend to be bitter (hops, coffee, whiskey), spicy (hot sauce, tacos, Flamin’ Hot Cheetohs), and hearty (meat!).

When those foods blow up, we judge women for falling for the marketing or trying to jump on the bandwagon, and we assume that because they like something other women like, they don’t have minds of their own. And on top of that, women are asked to reckon with, consciously or unconsciously, the perceived psycho-sexual symbolism attached to seemingly innocuous foods. “Cupcakes,” the women’s news site Jezebel declared in the midst of the cupcake boom, “have become shorthand for womanhood.”

In general, the language that’s used against women-centric food trends is coded and gendered. In a 2012 article about the froyo trend, The New York Observer disparaged the “cutesy” stores. According to The Guardian, the macaron is a “pastel menace” and “more a flouncy form of interior design than something good to eat.” Cupcakes, meanwhile, are “prissy.” Mike’s Hard Lemonade even worked on rebranding because much like wine coolers, as The New York Times explained, “sweet and fruity alcoholic beverages like Mike’s may strike some as unmanly.”

We also punish women for “ruining” other people’s experiences with their food preferences. In 2016, Domino’s released a series of ads for their new salad menu, joking that they reluctantly added it to appease the one person in your hypothetical group who didn’t want to eat pizza. This “lettuce lover” in the ads was always a woman; by offering salads, Domino’s explained, these domineering harpies could no longer “ruin” pizza night.

But the central critique of women-driven food trends is that women are getting food wrong. Things that are supposed to be complex, like wine, are vilified for being simple (never mind that the majority of wine drinkers are women), while foods like cupcakes and froyo pander to people who have no taste. And let’s not forget that women also needlessly complicate food that is “supposed” to be simple—why drink coffee when you can have a half-caf double caramel soy macchiato instead? Men can obsess over every aspect of procuring, drying, and grilling a steak, but women are the high-maintenance ones for arranging a beautiful smoothie bowl.

The treatment of women-centric food trends illuminates how, in many respects, whatever a man does is considered the standard that the rest of us should adhere to. If a man is fussy about craft beer or protein shakes, it’s food that should be fussed over. If a man requires nothing more than meat, potatoes, and a Budweiser, neither should anyone else.

That double standard, obviously, isn’t unique to food: Women have ruined movie franchises, music genres, and, of course, even men themselves. But the particular relationship women have with food makes this even harder to swallow (sorry). Not only have we traditionally been in charge of planning and making household meals, we’ve been commanded to do so while maintaining our beauty and “figures.” We are expected to produce food but are so heavily scrutinized when we consume it that finding joy in what we eat is often an incredibly fraught endeavor. Of course women are ordering salad; we’re taught to fear any “indulgence” bigger than a cupcake. So if you’re angry that a trend is ruining food, stop and ask yourself if the problem is women—or the endless cycle that judges them at every turn. Rosé, after all, can sometimes be just rosé.