Get a free recipe
Subscribe
Defending the Honor of America’s Most Disparaged Vegetable
By: Chuck Thompson Illustration: Adela Kang 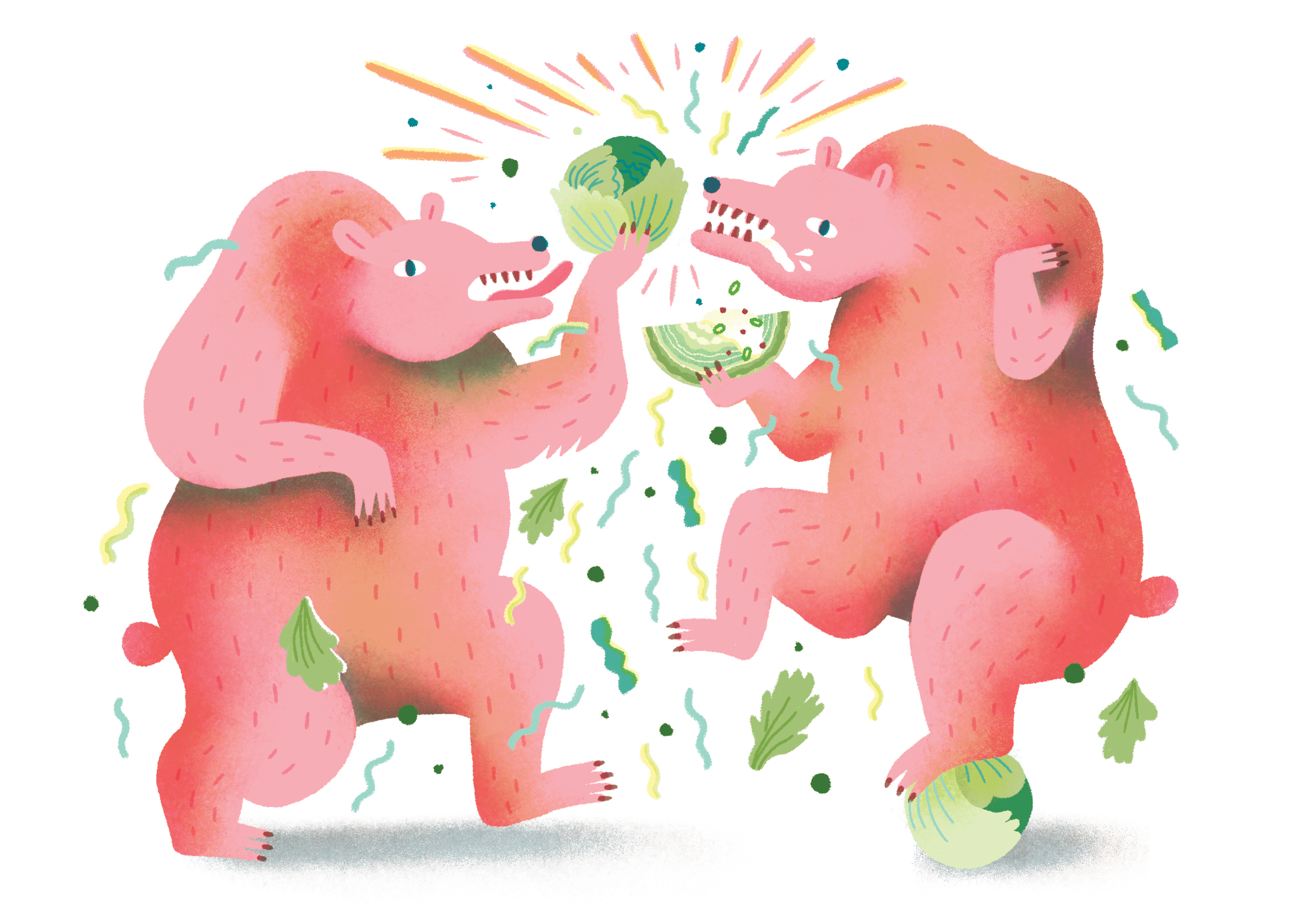 Think iceberg lettuce is nutritionally bankrupt? Turns out, it’s actually not much worse than other lettuces.

Admitting you have a thing for iceberg lettuce is like admitting you have an AOL account. You keep this shameful indicator of Pleistocene tendencies and cultural maladroitness hidden from all but your oldest friends. I’m here to confess to one of these social crimes. And no, I’m not giving out my AOL handle. To get that you had to have been pounding Rainiers with me back in the ’90s.

I grew up with iceberg lettuce. Mom was from the Midwest, so we ate iceberg lettuce every day. As the base of all salads, naturally. But also atop sandwiches, tacos, burgers, casseroles, whatever.

But assuming the cool pop of iceberg is a taste limited to bland nostalgics is a mistake. A steakhouse wouldn’t be a steakhouse without its hearty wedge salad—a greater bacon-and-blue-cheese delivery device will never be invented. The BLT would droop into irrelevance without the padding of some bright green shredded lettuce. Countless Asian dishes would have no crispy iceberg bed to serve as the perfect foil to chile oil, soy sauce, and five-spice powder.

From an early age, I understood why iceberg ranked atop the lettuce pile: taste, texture, and versatility. Then I grew up, went away to college, and, like a lot of people, lost touch with my roots. All those nutritionists! Suddenly, I was being beaten over the head with the message that iceberg lettuce wasn’t healthy; it was a pallid stepsister to romaine and red leaf, an ugly rump of air and water best equipped for rolling into a bear cage at the zoo.

Then it wasn’t even good enough for the bears. A professional guide to zoo nutrition programs I found online goes out of its way to specify four times that feeding lettuce to bears is fine, just as long as it’s not iceberg!

The way our former national lettuce has been traduced over the last quarter century, you’d think it’d been stripped of its official status as a vegetable.

I’m calling bullshit on all the abuse. And not just because iceberg has a crunch and consistency no other lettuce can match. (Though, seriously, what’s worse than a scrap of leaf lettuce rendered into a chewy washrag by a hot burger?)

Compare basic nutritional values of iceberg, romaine, red and green leaf, and butter lettuce and you know what you find? Not much difference, with the exception of vitamin A.

I’d give you the breakdown of romaine, butter, and green leaf varieties, but they basically tell the same story.

So, OK, it’s weak on vitamin A. Like this is a capital offense. You’re already eating enough vitamin A in sweet potatoes, carrots, spinach, kale, bell peppers, asparagus, tomatoes, green beans, eggs, milk, cheese, and yogurt. As if every damn thing you put in your mouth has to be a parade of nutrition anyway. No one eats totchos or cookie dough Blizzards because they think they’re gonna live forever.

It also turns out there’s not much difference in water content among lettuce types. And listen to this from David Still, a plant science professor at California State Polytechnic University of Pomona.

“Iceberg, although it is not the most nutritious overall, does have the highest concentration of a few compounds—some of which the world will soon learn about!—and vitamins,” he told me in an email. “Our data, and others, indicates the outer leaves (of iceberg) are just as nutritious, and in some cases, much more so, than other types. There is no single ideal lettuce type.”

Still declined to elaborate on that “new compounds” tease, but his email implied ongoing research that could make iceberg’s future even brighter than its past. Certain genes in lettuce connected to the production of vitamins and compounds require light before they’re stimulated to “turn on,” he told me. Because the interior of an iceberg doesn’t receive light, a lot of its nutritional potential is held in a sort of genetic limbo. Still thinks this can be changed.

“We have identified genes that require light, and one could, I believe, use biotech or CRISPR technologies to turn these genes on,” Still wrote. “Would the public accept that? Scientifically, there would be no harm in doing that.”

Professor Still confirmed what I’ve long suspected—that iceberg isn’t the pitiful nutrition player we’ve been led to believe. I was anxious to get the news out.

For a long time now I’ve imagined the existence of a K Street firm called something like the American Iceberg Lettuce Association, where disgruntled staff members sit around bitching about the bad rap their prized Lactuca sativa gets, just waiting for a guy like me to come crawling out of the cabbage patch with an exposé that’ll vault iceberg back to its rightful place of prominence. This didn’t turn out to be precisely accurate. Finding a vested iceberg cheerleader was trickier than expected.

The first place I contacted was the Grower Shipper Association of Central California. Located in the Salinas Valley in Monterey County—“the Salad Bowl of the World” produces 61 percent of the leaf lettuce and 56 percent of the head lettuce consumed in the United States—the GSAAC was founded in 1930 specifically to promote iceberg lettuce, which back then and well into the 1990s dominated salads in the United States. The GSACC seemed the perfect outfit to give me some heavy ammo. But the VP of communications demurred—“I’m not the best person to answer your questions”—leaving me puzzled but undeterred.

A couple other likely experts passed as well but pointed me to a woman named Mary Zischke of the California Leafy Greens Research Programs. But Mary never responded to my inquiries. And anyway, in a 2013 Smithsonian article supposed advocate Zischke took a big dump on iceberg saying, “Tastes have changed. And the darker, leafy greens have a better story to tell from a nutrition standpoint.”

Where was the passion for iceberg?

Finally I found Diana McClean, the director of marketing for Ocean Mist Farms, which grows all types of lettuce and vegetables in California and Arizona. I liked McClean right away. She’s easygoing, forthcoming, and candid. Imagine the opposite of Sean Spicer.

Is Big Iceberg aware of its woeful reputation, I asked. Does it have a chip on its shoulder?

So I was gonna have to get pregnant to appreciate just how bad iceberg sucked?

“What you see in restaurants is often what will trickle down to your dinner plate,” she said, more or less implicating snooty chefs. “There are other things that are more exciting to talk about and add to a menu than iceberg lettuce.”

The stats sort of back this up.

“The number of times restaurants have mentioned iceberg lettuce as a menu ingredient in salads has dropped 17 percent in the last three years,” according to a 2016 MarketWatch story. Friggin’ Chick-fil-A, not exactly a culinary think tank, declared iceberg dead to them in 2016, making a big deal of the fact that it was removing the populist staple from its salads.

McClean did allow that iceberg’s pleasing crunch set it apart from the crowd of mostly soft competition in the texture category. But when I asked her if she ate iceberg lettuce herself, she simply said no. The line went silent for an awkward moment. I was starting to see why Trump values a guy like Spicer so much.

I’m currently carrying on my love affair with iceberg lettuce from Portland, Oregon, where chefs would rather put lawn trimmings and bison ovaries in a salad than defile it with a shard of iceberg. If someone figured out how to make iceberg lettuce beer, I suppose that’d fly here.

But outside the most self-aware eating city in America, it turns out iceberg is, if not king of lettuces, still firmly in the royal court. Despite the calumny regularly spread about iceberg’s popularity—in 2011 Britain’s Telegraph declared, “The era of iceberg lettuce is over,” as though Mussolini had just been strung up in the town square—iceberg is still chopping up most of the competition.

Although romaine took its crown as the top-selling American lettuce in 2015, iceberg remains the country’s solid number-two variety, according to Matt Lally of Nielsen Perishables Group. (Yep, the same company that tracks our TV viewing also knows if we’re eating our vegetables.) But even he had to toss a shovelful of earth on poor old beleaguered iceberg.

“Total dollar sales of iceberg lettuce [in 2016] declined 9 percent, compared to a decline of 0.6 percent for romaine lettuce,” Lally told me.

Mildly distraught, I wandered to the Safeway down the street from my house. Iceberg lettuce was still stacking up pretty well there, even if it gets a little lost amid the modern grocery’s RGB produce palette. Looking at the entire lettuce family getting along so well, I wondered how this little ball of light had garnered so much antipathy.

For being tasteless? What, like vodka? Nutritionally deficient? Shit, there’s a whole aisle in every supermarket in the country dedicated to colored sugar water. Clearly there was more work to be done in my quest to see the dignity of iceberg lettuce restored. No matter how it works out, iceberg lettuce isn’t getting pushed off my plate anytime soon.

Chuck Thompson is the former executive producer of CNN Travel and author of BETTER OFF WITHOUT 'EM: A NORTHERN MANIFESTO FOR SOUTHERN SECESSION. He's written for a range of publications from Outside to The New Republic. He splits his time between the eating meccas of Portland, Oregon, and Juneau, Alaska.