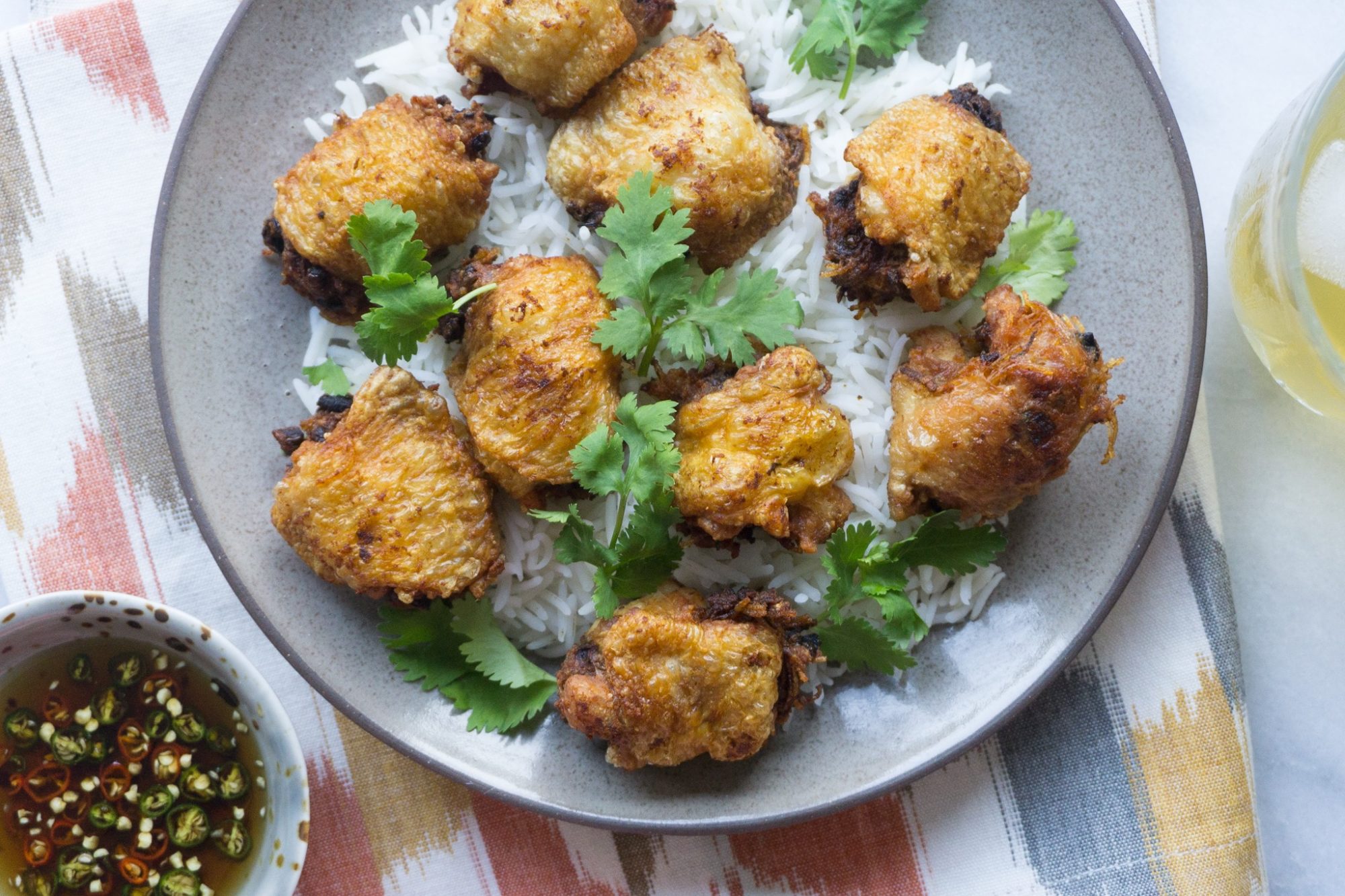 Why settle for a dumpling or a chicken wing or a plate of noodles when all three of these exist in one perfect dish?

If you’ve never encountered stuffed chicken wings before, just imagine a tasty dumpling or spring roll. Then, instead of the dough-based wrapper, the filling is enveloped by a boneless chicken wing, as if it were a sausage casing. When you bite into it, your teeth snap through the crispy chicken skin and you taste the juicy chicken flesh, flavored by the ground meat and aromatics of the filling. It’s complex, satisfying, and goes so well with a tall glass of cold beer or iced jasmine tea.

The wings are a classic of Southeast Asia, making appearances in traditional Thai, Hmong, Cambodian, and Vietnamese cooking. Its origins are hazy—anyone I’ve asked about the dish claims it as their nation’s own. As with many of the dishes and components we share, like rice noodle soup, curries, and fried rice cakes, the regional variations are incontrovertibly beloved, and we own them with as much patriotic fervor as Canadians do poutine.

My favorite variety of these wings is the version that my grandmother makes, which is served with a side of nuoc cham (a swirl of fish sauce, lime juice, chile, and sugar) for dipping and uses the filling for Vietnamese spring rolls: ground pork, bean thread noodles, fish sauce, and chopped vegetables. She must have deboned hundreds of chicken wings over the years. By the time I came around, she was a pro, able to swiftly manipulate the meat and bones with her bare hands, all while talking on the phone, fending off unruly toddlers, and keeping her eyes on the Paris by Night show playing on the television. For a beginner, the deboning part is probably the most intimidating, and the skill comes with repetition and practice. Deboning a wing while maintaining its natural pocket shape and avoiding puncturing the skin seems like a tall order, but after years of observing relatives, chefs, and butchers do the deed, I realized that there are as many variations on deboning techniques as there are fillings. Some people only use one part of the wing: either the drumette or the flat, which is the part attached to the wingtip. Others keep them attached and debone both to create a plus-size stuffed wing. Once, I even tried using a turkey wing to make this dish (suffice it to say it turned out scary-huge.).

If you really want to get good, buy a stack of wings (at least they’re cheap) and familiarize yourself with how they’re “built”—where the muscles latch onto the bones, and how much force you need to apply in order to snap the joints by hand. Don’t feel bad if you tear up the first few you do; just chop up the meat from those and add it to your filling. This video is a really fast and good demonstration of the deboning process, and there are more detailed instructions below. The Japanese version, teba gyoza, is stuffed with a pork-based gyoza filling, tossed with a bit of potato starch before frying to crisp it up, and served with a wedge of lemon. That version has also featured prominently in foodie comics like Food Wars and Sweetness and Lightning. Hmong folks marinate the wings with a bit of red food coloring, which makes them look like fat red tadpoles once roasted. And the Thai versions I’ve had are served with sticky rice and fresh sliced cucumber to cut the fattiness of the dish. I’ve even seen Americanized versions stuffed with Cajun boudin sausage or, in a kind of perverse, scary-but-tempting take, the components of chicken cordon bleu.

It takes a very specific level of dedication and selflessness to debone, stuff, and fry a pile of chicken wings so that you and your friends can eventually eat them when you’re drunk. Your love for your future drunk self needs to outweigh your desire to eat these rich, savory, and juicy wings as soon as possible. I know it’s hard. Odds are, you’re not going to be able to hold out. But that’s OK: Either way, you’re getting wings.