Get a free recipe
Subscribe
Will the Real Frozen Yogurt Please Stand Up?
By: Priya Krishna Photos: Lizzie Munro 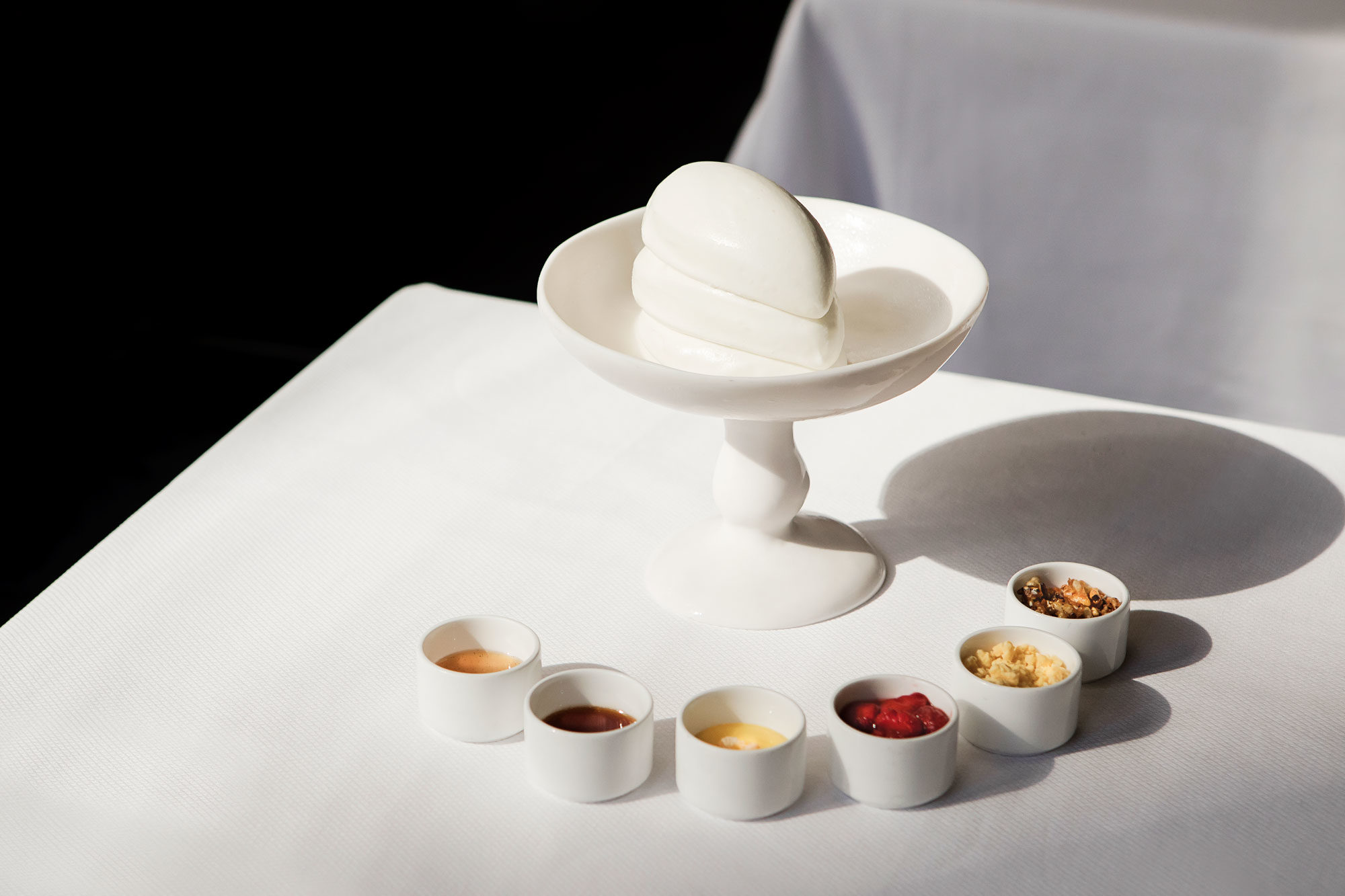 Real froyo has a secret—and it comes from a can.

Frozen yogurt is a lie.

Or, at least, that’s the experience of Stephanie Prida—the wickedly adventurous pastry chef behind the monied New York restaurants the Grill, the Pool, and the Lobster Club.

She grew up in San Diego, where you still can’t drive a mile without spotting a frozen yogurt shop with a name like Cloud 9 or Yogurtland. “But none of them are serving true frozen yogurt,” she says with a small eye roll. What is sold almost uniformly as “frozen yogurt” is actually just milk powder or sweet cream, plus lots of water. There is no real yogurt involved in the creation. No fermentation. No pucker-inducing sourness.

So when the Pool opened in 2017—taking over the iconic Four Seasons in the Seagram Building and run by Rich Torrisi, Mario Carbone, and Jeff Zalaznick—Prida decided to take on the challenge of creating a real frozen yogurt. This meant coming up with a yogurt that would stay soft and creamy when frozen while maintaining that classic tartness.  The result is a showstopping sundae that might just be the best frozen yogurt in America right now. The taste is totally distinct—neither the sweetness nor the tartness hits you right in the face. Both are subtle, but lingering. It’s the kind of frozen yogurt you want to let luxuriate on your tongue.

And its secret is a truly wild-card ingredient: sweetened condensed milk.

The dessert started with Prida wanting to create something that mimicked ice cream rippling out of the spinning machine. “That is the best way to eat ice cream,” she insists. “Right out of the machine. But people in the regular world never get to experience that.” They get ice cream scooped from a tub that’s been sitting in the freezer for weeks collecting ice crystals.

But the ice cream idea quickly pivoted to frozen yogurt. Why? Frozen yogurt has a more versatile base—it’s not flavored, except for the naturally sweet and sour taste of the yogurt. And for guests expecting a banana split or a sundae, it was more unusual than plain old ice cream. Plus, tart frozen yogurt is decidedly untrendy—it had its moment back in the early 2000s. She was up for the challenge of making it cool again. Prida had come up with the idea to use sweetened condensed milk when she was making regular yogurt at Manresa, the globally acclaimed tasting restaurant run by David Kinch in Los Gatos, California, where she was pastry chef for five years. Sweetened condensed milk “has that ooey-gooey texture that’s kind of sticky,” she recalls of her big idea. “When we added it to yogurt, it just turned really silky and not too sweet and much more creamy.”

The condensed milk gets added to the yogurt at the same time as the starter (the bacteria that starts the fermentation process). After the yogurt sets and chills, Prida strains it to have a thicker, Greek-yogurt-like texture. To make the frozen yogurt, she creates a base of milk, glucose (corn syrup also works), and sugar, drops in ascorbic acid for additional sourness, mixes in the condensed-milk-infused yogurt, and churns it in an ice cream machine. The yogurt that comes out of the machine looks, at first, indistinguishable from regular yogurt—it has that familiar lush, run-your-spoon-through-it texture. It doesn’t melt easily. But it also has a slight stretch, similar to booza, an ice cream variety from the Levant whose unique consistency comes from mastic and sahlab, a ground root. (Prida’s version has neither.)

At the stately, almost museum-like restaurant off Park Avenue, where you might spot Justin Timberlake and Ralph Lauren sharing a table, Prida serves three generous quenelles of frozen yogurt in a sundae bowl. They are dolloped, one on top of another, to look like those ripples from an ice cream machine. The toppings change seasonally—tomato honey in the summer, marmalade in the winter—but they always include a thick caramel made from the leftover whey from the yogurt, along with yuzu curd and a granola sweetened by honey and coconut oil.

The frozen yogurt is currently the most popular dessert at the Pool, surpassing the bright green, dome-shaped “celebration cake” and the mousse-like chocolate crémeux.

It’s improbable, in a way, that this out-of-fashion dessert has managed to earn such a following. But then again, Prida adds, that’s the whole point of what she does: “To take these really simple things from your childhood and make them more elegant and realistic in this world.”