Get a free recipe
Subscribe
Who Are These Maximalist Cheese Boards For?
By: Ruby Tandoh Illustration: Carolyn Figel 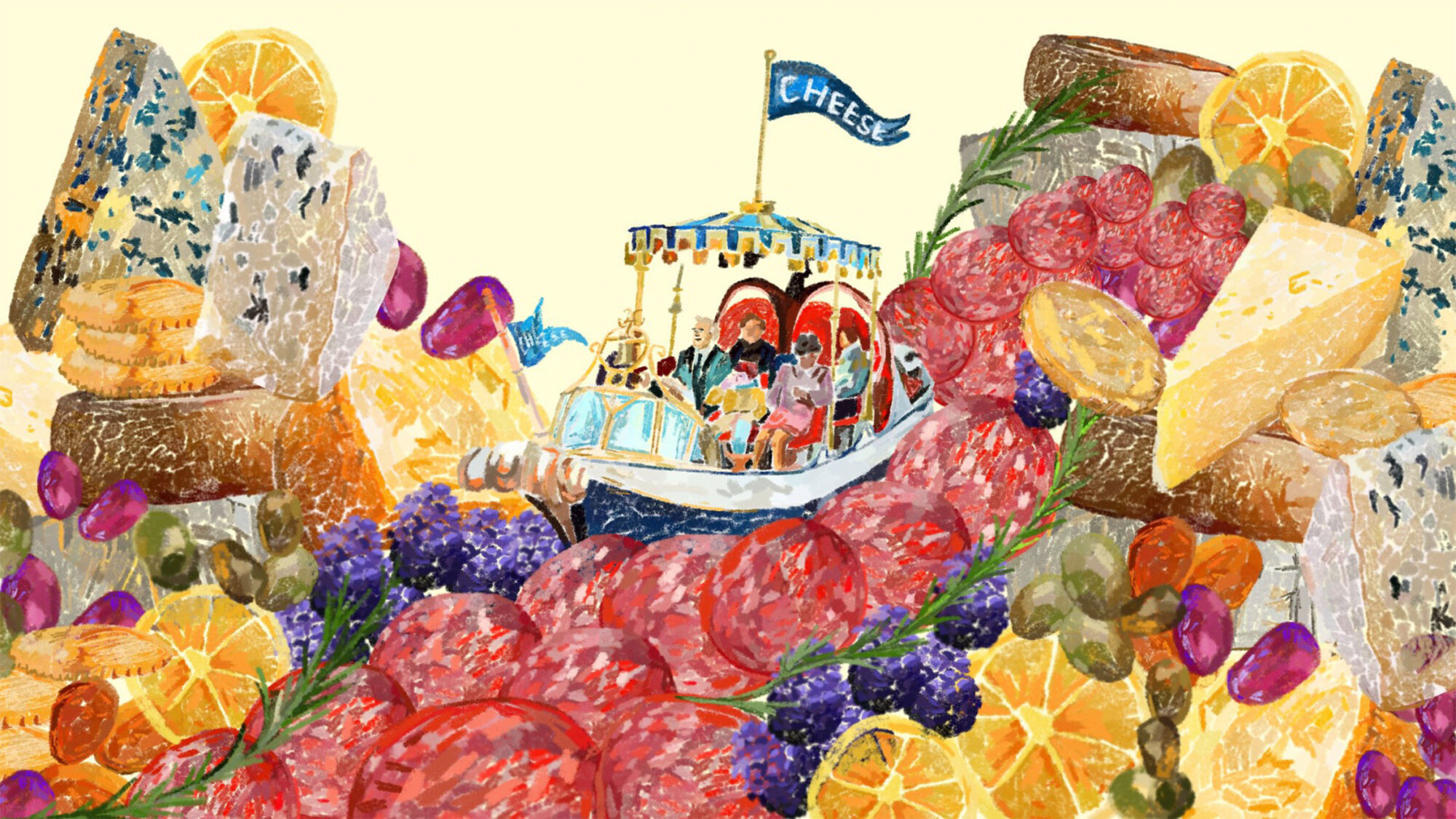 The self-care industrial complex has come for your cheese and charcuterie. Are you ready to sail the salami river?

I find it hard to look away from beautiful things, and even harder to look away from things I hate. Somewhere in the middle of this Venn diagram is clustered most of my Instagram life: all those algorithmic scabs I keep picking because I just can’t get enough. Among the regulars on my Instagram feed are wellness personalities, rainbow bagels, and models “coming out” about the fact that they once had a pimple. One day last summer, something new appeared amid this mosaic of beautiful, terrible things: pool-table-size cheese boards more elaborate and outlandish than anything I had seen before. I hated them. I was hooked.

These cheese plates—sometimes called charcuterie platters, or even “grazing tables”—are not cheese boards as you might know them, with a hunk of Cheddar and maybe a wedge of Stilton, a few Carr’s crackers, and sliced apples. They are cornucopias: edible landscapes of Gouda or Gruyère; “salami rivers” (definitely check this out on Pinterest and TikTok); constellations of nuts, fruits, crackers, dips, and bread. At their most extravagant, these “plates” are entire tables so laden that you can scarcely see the wood for the cheese. There are date-night cheese plates, boards for one, medieval-banquet-style platters, and dairy-free boards that partner cashew cheese with dragon fruit, Persian cucumbers, and, inexplicably, blue thistle flowers.

The most audacious are those marketed as “self-care”—locating that once political praxis somewhere between the Comté and the chicken liver mousse. When writer and activist Audre Lorde first started talking about self-care in 1988, it was as an act of “political warfare”: a way for black women to preserve their strength in the face of a misogynistic and racist society. The version of self-care that these platters espouse is rather less radical—a politics as soft, indulgent, and, well, cheesy as a ripe Brie. “Spending $50 at a cheese shop is ok. Making a cheese plate and eating it all by yourself in one sitting is ok. Eating handfuls of shredded cheese at 3AM is ok,” tweeted one cheese fan Twitter account, apparently with tongue only half in cheek. “Do what u need to do to cope.”

It was only a matter of time before cheese became a vessel for these kinds of big promises. It happened to the practice of eating healthfully, when things like eating veg and drinking water were swallowed into the Goop-y quicksands of wellness. It happened when bread started costing more than the meat it sandwiched, and when the humdrum ritual of putting on moisturizer was fractured into countless prismatic skin-care regimens. The more mundane the subject, the more aggressive this transformation: turning everyday things and foods into moments of exquisite, exclusive self-care. If serving $300 of fresh produce—none of which is easy, carb-y “filler,” and all of which needs to be sourced with extreme care from high-end grocery stores or specialty delis—is about helping us to be the best, happiest, and most fulfilled versions of ourselves, I’m curious to know who that “us” really is.

The most audacious are those marketed as “self-care”—locating that once political praxis somewhere between the Comté and the chicken liver mousse.

Ned Palmer is, by his own admission, a grumpy cheesemonger: He knows that he can skew toward puritanism when it comes to the food to which he’s devoted nearly his entire working life. We meet in London Cheesemongers, a cheese store tucked away in a side street in the west end of the city, where Ned rattles with excitement as he chooses a selection of cheeses for us from the crumbling, ripe, and pungent wheels adorning the altar-like counter. “Try that mold,” he insists, cutting me a small wedge of Saint-Nectaire—a semisoft cow’s milk cheese whose outside is felted with a soft, gray fur. “The rind,” he says fondly, “tastes like an old country church.”

Ned offers to make us a cheese plate to show me what the alternative to those outrageous grazing tables might look and, crucially, taste like. The board Ned serves is sparse and to the point: seven cheeses on a small wooden board. We try them slowly and mindfully, in order of increasing intensity, with a block of red ochre membrillo (quince paste) on the side. It’s not difficult to understand why a man who revels in all of this stinking glory—from the “fecal notes” of a wrinkled, powerful St. Cera cheese to the “butter crumble” texture of a good Lancashire—might rankle at the exuberance of the outsize grazing table, where the actual qualities of the cheese are all but lost to the spectacle. “I don’t want it to be a gimmick. I think there’s some objective measure of good in cheese.”

What’s most striking about Ned’s understated cheese board isn’t what we eat, but how we eat it. Almost by accident, Ned practices many of the ideas that more ostentatious cheese board makers assume under the mantle of their personal brand. If putting together a cheese board is about mindfulness, Ned certainly has that covered: He immerses himself fully in his senses, smelling, squeezing, and tasting his way toward the best cheeses he can find. If it’s about creating something beautiful for your guests, he succeeds on that count, too (in spite of that pungent St. Cera). If it’s about “self-care”—even of a defanged, depoliticized sort—I’ve never seen anyone, anywhere, as joyous as Ned was when he was cutting into a wedge of Stichelton, a perfect, creamy blue cheese made from unpasteurized cow’s milk.

But this isn’t a call for puritanism. Ned knows that for all the talk of craftsmanship, terroir, and tradition in cheese circles, there needs to be room for fun, too. Somewhere between the high altar of cheesedom and the Dante’s Inferno that is the “grazing table,” there are string cheeses and blocks of slightly sweaty Cheddar and Kraft Singles, all of which can be laid out on a plate and enjoyed—even exalted—if you just know how to have fun with the food you eat. Pondering the theatrics of over-the-top cheese boards, Ned can’t help but smile. “There’s a cheesemonger I know. He’s always said if you don’t play with your cheese, it’ll play with you.”

When I ask food writer Alison Roman what she thinks of the whole ordeal, she’s unreserved. “I’d tell everybody: calm down!” she laughs. “Cheese is delicious! But I think the idea that opulence somehow equals quality is something we can move past.” Yet she can see the place these plates might occupy for those who can’t, won’t, or don’t cook—at least in the traditional sense. “I talk a lot of shit on [these plates], but I realize that for those people, it’s just their way to express food in a different way.”

Somewhere between the high altar of cheesedom and the Dante’s Inferno that is the “grazing table,” there are string cheeses and blocks of slightly sweaty Cheddar and Kraft Singles.

It’s a refrain you see over and over in online cheese board chat: “I don’t like cooking, but I love feeding people. Cheese plates help me bring together the people I care about.”

And it works. When Roman goes to a party and sees a cheese plate sprawled preposterously across a trestle table, she dives in with the full force of her hunger. It’s not self-care (at least, not as Audre Lorde would recognize it), and it’s debatable whether these elaborate feats of culinary assemblage are really as accessible as they claim. If this is cooking made easy, we’re in trouble. But in their ridiculous, dreamy maximalism, these boards capture the depths of conspicuous consumption, and the best of our wild and wondrous appetites. “It’s like a pile of weird treasure, you know?” Alison enthuses, almost in spite of herself. “There’s something fantastical about it.”