Get a free recipe
Subscribe
When Your Favorite Restaurant Is 3,000 Miles Away, the Solution Is to Cook
By: Carlye Wisel Photos: Henry Hargreaves & Mikey Pozarik

There are three things writer Carlye Wisel has missed about New York City since fleeing to the West Coast last year: a tiny handful of people, her chiropractor, and Jack’s Wife Freda, the multidimensional café and cool-kid canteen with locations in Manhattan’s SoHo and West Village neighborhoods.

Since opening up shop a half-decade ago, Jack’s Wife Freda has been filled with many famous and fabulous customers, none of whom were me. I’m just somebody who showed up so early and often, to chow on slices of haloumi and drink cappuccinos, that I proved unignorable. (It helps that even once the plates are licked clean, the convivial wait staff will never kick you out.) Now, with the magic of the restaurant bottled up in the new cookbook Jack’s Wife Freda: Cooking From New York’s West Village, I’m finally able to replicate the experience at home…or at least starve trying.

The spot has amassed popularity for being a bit of everything to everyone—offering picture-perfect dishes that are low-key healthy and an ambience that’s inviting yet also a little exclusive. For those who have never survived the crowds spilling out onto the sidewalks at the Carmine and Lafayette Street locations, Jack’s Wife Freda is New York’s answer to the busy French bistro, with a charm and style honed during owners Maya and Dean Jankelowitz’s tenures at Balthazar and Schiller’s Liquor Bar. Maya worked her way up from hostess to maître d’ at Balthazar, where she met Dean, a longtime waiter who would go on to cultivate Schiller’s relaxed cool. With a sixth sense for caring for diners as they would their own, the two became experts in creatively pleasing and paying mind to individual patrons, delivering a drink here and a favorite table there, a practice that would be folded into their own locales.

The restaurant’s point of view is a beautiful abstract, melding South African flavors, Parisian mainstays, Israeli side dishes, Greek standards, and Jewish home cooking into an all-occasion collection of recipes seemingly made through the world’s most delicious game of telephone. With its quirky name, homespun dishes, and massive social media following, the release of the restaurant’s first cookbook begs the question—is the restaurant’s popularity due to the food’s stellar execution? Is it the crowd? Is it the Instagrams of waffles piled high with fresh berries?

When it opened in 2012, well before restaurants were deliberately painting their walls Instagram-worthy shades of pink and turquoise, Jack’s Wife Freda served colorful creations (the Benedicts are red-purple; the shakshuka is lime green) that were as pleasing to the palate as they were to the eye. When Dean quizzically asked Jack’s Wife Freda chef Julia Jaksic to create something that “smells like Durban,” she researched the South African coastal city’s influence and delivered a fennel-tinged mussels bowl; the same is true of the drizzle-on-everything green hot sauce. “I think they wanted the Israeli [version],” Jaksic explains, laughing. “When they said ‘green hot sauce’ to me, just because of my New York cooking experience and being in kitchens with Mexicans always, of course it’s gonna be jalapeños and cilantro.” Halfway between zhug (an Israeli hot sauce) and a full-on dip, it’s indescribably good, unifying the tastes of their global menu.

Like a Matryoshka doll of hospitality, Jack’s Wife Freda’s essence has always been familial, and the cookbook is even more so. With hand-scrawled fonts and friendly doodles serving as an extension of the restaurant’s irreverent placemat menu and cheeky sugar packets, it all feels so deeply personal. I mean, show me another cookbook with a 12-page introductory essay outlining the truly unbelievable, deeply diasporic history of the proprietor couple and the grandparents behind the bistro’s quirky name. This sense of family is omnipresent, with recipes designed so that anyone, anywhere can re-create them. Hopefully. Chef Jaksic deliberately kept some of the measurements loose, calling for bunches of cilantro in the house-made hot sauce in lieu of specificity. “Because we wanted to approach this as a home cookbook, we felt like ‘4 ounces of cilantro,’ that was a little…not homey, you know?” she explains.

Just like the backstories, the variety of dishes within the cookbook is straight bonkers. There are lamb stews and veggie curries next to cantaloupe juice cocktails and spiced beet dips, fish balls and childhood-favorite chicken livers on toast explained near recipes for egg salad sandwiches or the potato latkes the namesake Jack (Dean’s grandfather) sold as a young boy in the shtetls. Want a healthy lunch, like the miraculously mayonnaise-free tuna salad or avocado toast? There’s a recipe for that, as well as fried zucchini chips with smoked paprika aioli and a caramel-soaked dessert named for the Afrikaans word for “marshmallow.” Readers flipping through the colorful pages in pristinely curated boutiques might be confused about the through line in these flavors, but in person—whether on its inviting benches or your own crumb-filled couch—it all works just as well.

The restaurant famously serves up dishes that are unique but accessible, but after working my way through the book, I realized that there’s nothing downright simple. The food may have an ease about it, and the majority of dishes aren’t difficult to create, but even straightforward ones require finesse and care. Poached eggs with toasted tomato and haloumi, for example—a meal whose name precisely outlines what it is—calls for a 75-minute oven roast of the thyme-covered tomatoes. “I think simple food is the hardest food to make,” Jaksic says, and after shrinking tomatoes in a skillet because I was too hungry to care, I’d have to agree. (It was still fantastic.)

Other items are sneakily difficult, too: Jaksic jokingly references the Goodfellas garlic-slicing prison scene in reference to the mixed preparation of her raw-and-cooked roasted cauliflower, and the duck bacon, which has a dedicated two-page photographic guide to curing and smoking it at home, is the book’s most labor-intensive.

Any challenge with these recipes likely won’t come from the preparation, but ingredient sourcing; I went to a grocery store, an Asian market, a health-food shop, and a Whole Foods in Los Angeles and still couldn’t find Hungarian paprika (which is a little bit sweeter than regular paprika). After searching for and failing to find kecap manis (a sweet Indonesian soy sauce), I eventually resorted to making my own. When Jaksic tested the recipes in Nashville, she struggled to find watercress and her preferred version of labneh, trying various kinds sold within the city’s Kurdish-American community. While speaking with her, I could hear her concern about the produce also varying from location to location. Here was the chef behind of one of New York’s quintessentially hip restaurants hoping a Montana-based reader could find the right vegetables in the wrong season to lovingly make these creations.

Like recipes passed down between generations, every dish you make and devour from Jack’s Wife Freda’s first cookbook will taste like home cooking, yet slightly different from their own home cooking. My attempt at the famed peri-peri chicken, served with a side of chopped salad, couscous, and hot sauce, was easily one of the best I’ve ever made—but more of an homage to the restaurant than a duplication. When I ran out of arugula and wanted to make the tuna salad again, I used kale and radishes; it was just as delightful. I may be the only one craving an exact replica of this New York institution from afar—which is impossible, for reasons ranging from ingredients to, well, a propensity to lazily chop things with a steak knife—but no matter which way you slice it, these recipes are pretty damn good.

Shakshuka (shahk-SHOO-ka) is a dish of Tunisian origin, possibly dating back to the Ottoman Empire, and possessively beloved by Libyans, Egyptians, Moroccans, Algerians, and Israelis alike. Simply put, it’s a traditional Middle Eastern breakfast and lunch dish consisting of baked eggs and tomatoes. Growing up in Israel, Maya tried many different incarnations—each family’s variation subtly different and fiercely defended. We knew we wanted a shakshuka on our menu, and it needed to be spectacular. This interpretation of the dish lends a more Latin American spin to the classic tomato sauce. We love the fresh zestiness of the tomatillos, the richness of the egg yolks, and the doughiness of the toasted challah. Ours may break with tradition, but we think that rolling the word “shakshuka” off your tongue is nearly as delicious as eating our version of it!

“We need a dish that smells like Durban!” said Dean one day.

The Jankelowitz family used to vacation in the coastal South African city during the summertime, and Dean remembers it dreamily for the elegant beachfront hotels and the best Indian food outside of India. After some research, chef Julia began to conjure the smell of fennel, curry, and salt water in the air. She got to work tinkering with various ingredients and flavors and finally served this very same bowl of mussels to Dean, who smiled and said, “Smells just like home.” This recipe makes enough for four as an appetizer or dinner for two. We serve it with crusty toasted bread made with a little of our garlic butter for a more substantial meal. 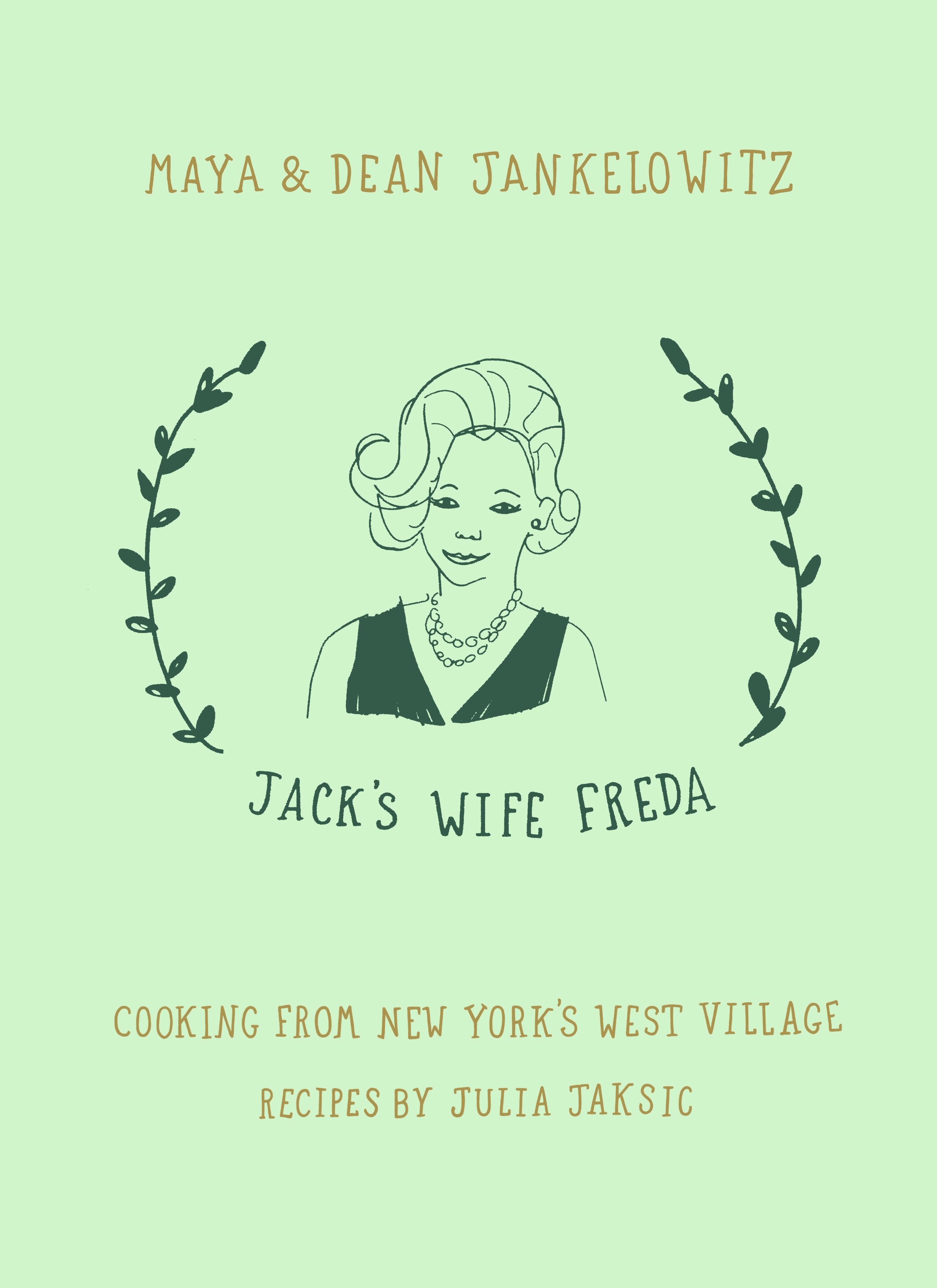