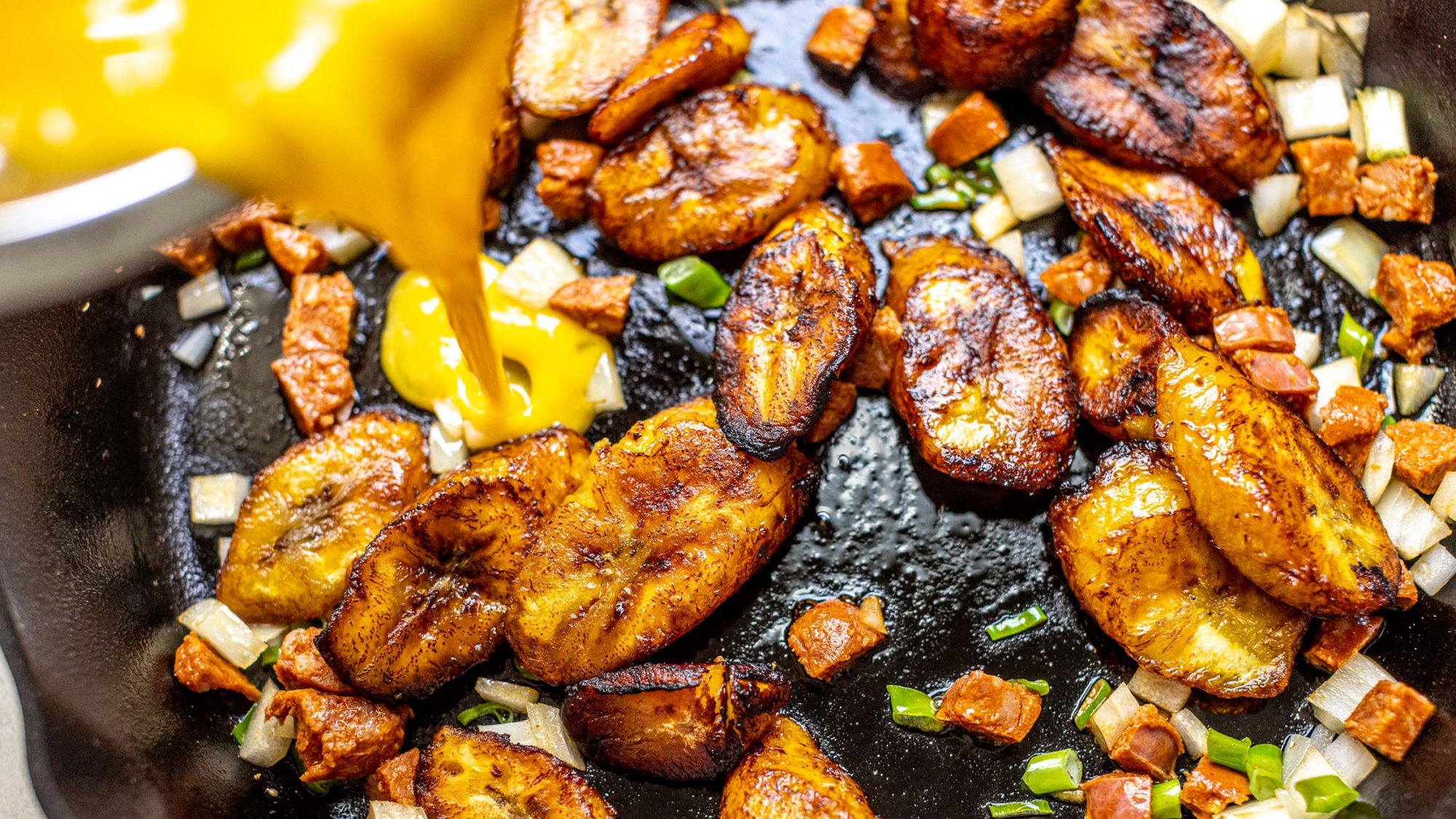 The starchy, sweet take speaks to Nigerian roots and a quintessential American breakfast.

Gooey dollops of beige fufu dunked by hand into bowls of steaming hot, reddish-brown beef stew. Curried jollof rice, as orange as Halloween pumpkins, packed full of tender shredded chicken breast and fragrant fried onions. Barely sweet chin-chin—tiny fried squares of dough, crisp on the outside and scone-like on the inside.

As a first-generation Nigerian American growing up in a small Central California town, I treasured these foods from my father’s homeland, which he would prepare for my siblings and I during occasional weekend dinners together. As a kid, I was entranced by the cooking—and the inevitable stories that would arise during the cooking—about schoolboy pants pockets stuffed with cooked sweet potatoes for a midday snack; or dried beef, fresh mangoes, and melons tossed from a mother’s hands out a train window into the expectant arms of a son safe at boarding school, unable to return home due to civil war. But it is a simple Nigerian dish with an American twist that comes to mind for me now when I long for my father’s cooking: plantain scramble.

My favorite Saturday mornings as a child were the ones when the oversized starchy bananas my father had bought at the Albertsons grocery store a few days prior were finally ripe. We’d sit, mesmerized, as he ritualistically peeled back the skin on each plantain, sliced the fruit at an angle to create the perfect oval shape, and then slid each slice into a cast-iron pan bubbling with hot canola oil. When the frying was finished, he would drain the oil from the pan into his “oil mug,” and begin dicing meat and vegetables—onions, bell peppers, breakfast sausage, or leftover ham. He would then crack nearly a dozen eggs into a bowl and whisk them up. Next, he would heat up an electric skillet and drop all the ingredients onto the warm surface: first the fried plantain slices, then the meat and vegetables, and finally the whisked eggs. Then, he would turn the temperature down and cover the skillet with a lid as we waited in anticipation. Each time he made the dish, it seemed more flavorful, and perfect, than the time before.

I recently asked my father if the recipe was something he grew up with in his hometown of Kano. He confirmed what I had suspected: The scramble was for us, his American kids. He had eaten his fair share of fried plantains as a child, but eggs would have been expensive for his family when he was growing up in the 1960s.

I try my best to imitate my father’s plantain scramble for my own family now. Like him, I only make the dish on rare occasions and when I need comforting. I like to prepare it alongside a rice cooker full of steamed white long-grain rice, drizzled with soy sauce. Recently, when news of the #EndSARS movement against police brutality in Nigeria spread across social media, I found myself thinking of my cousins while roaming the produce aisle at the grocery store. I grabbed a trio of plantains and tossed them into my shopping basket. I took them home to ripen.

Jessica Kehinde Ngo is a writer whose work addresses food, twinship, intercultural and interracial relationships, and motherhood. Her writing has appeared in the New York Times, the Los Angeles Times, Harvard Review Online, Entropy, Artillery, Hippocampus Books and The Journal of Compressed Creative Arts. She lives in Los Angeles with her husband and sons and teaches writing and food literature.