Get a free recipe
Subscribe
What to Do With Okra?
By: Scott Hocker Photos: Denny Culbert 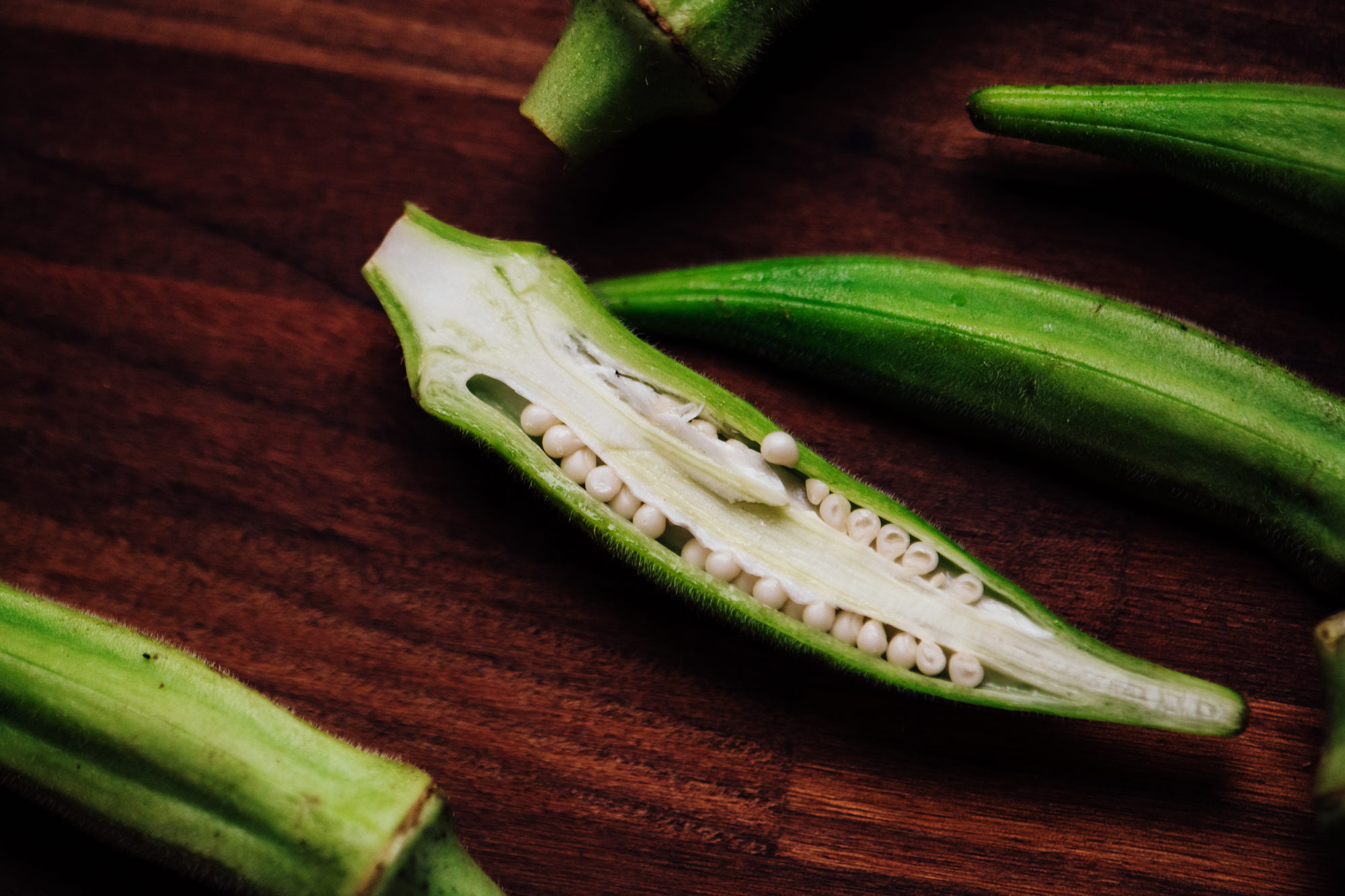 Following the pentagonal fruit from Africa, Louisiana, India, and the Levant.

Okra is beloved in New Orleans. It whistles of home for many. It is also stained with impalpable blood.

What to do with a vegetable like okra, that sticky variant of the mallow family. Smother it with tomato and onions. Murmuring of its tear-soaked journey to these shores. Cut it in rings, soak it in buttermilk, coat it with cornmeal, and fry it until gold like the autumn sun. Gurgling with injustices, old and new. How does a white man from California cook okra. I often look east, to India. Sautéed with mustard seeds and curry leaves, as is common in parts of South India. Pan-fried in a North Indian manner with onion, coriander, and tangy amchoor, gleaned from Madhur Jaffrey. Then I discovered an old, fresh way in the book Our Syria.

Its authors, Itab Azzam and Dina Mousawi, are based in the United Kingdom, and their book is a vibrant collection of recipes and stories, all provided by women refugees of Syria’s years-long civil war who have settled in Europe or countries neighboring Syria.

The book’s sole recipe for okra is a stew called bamia, the Arabic name for okra. In bamia, as the name suggests, the okra stars. Chunks of lamb, a trio of tomato preparations, and a heady blend of cardamom, coriander, nutmeg, and four other spices provide ballast for okra’s green, giving snap.

I asked Anissa Helou, the well-traveled, Lebanon-born author of Feast: Food of the Islamic World, about the role of okra in the cooking of the Levant. She explained that okra is one of the most prized vegetables for cooking in olive oil or with meat—bemyeh bil-lahmeh, as the technique is called in Lebanon—because of the okra’s seasonality. So it is with the Syrian bamia stew, Syria being just to the east of Lebanon. I sensed bamia’s knotty affinities with the tomato, onion, and okra stews of the Deep South. I was conflicted. A war rages in Syria and has for seven years. Half the population has been displaced, cities ravaged, and here I am in Louisiana, secure in my home country, living in a city of my choosing, dabbling with a recipe from Shaima, a Syrian woman forcibly displaced in her own country.

“The only positive that has come out of that tragedy is this,” noted Helou when I asked her how we write about and cook Syrian food now. “Refugees with a natural talent, especially women, are making Syrian food visible and sometimes even turning Syrian cooking into a profession.” It is happening where the displaced are cultivating new roots in countries across Europe and countries closer to Syria itself. Books like Our Syria bring specificity and nuance to our outdated notions of the cooking of that region. There is no blanket Middle Eastern food. Even the term “Middle Eastern food” is mendacious. It reduces when it should expand.

Maybe we are entering a post-Ottolenghi world. Where a sense of place and people and context matters as much as a pantry of forceful ingredients, like pomegranate molasses, preserved lemons, and dried sour cherries. Where a traditional Syrian stew of okra, tomato, and lamb washes onto the shores of the Mississippi, feels a pained kinship and, somehow, tastes like home.