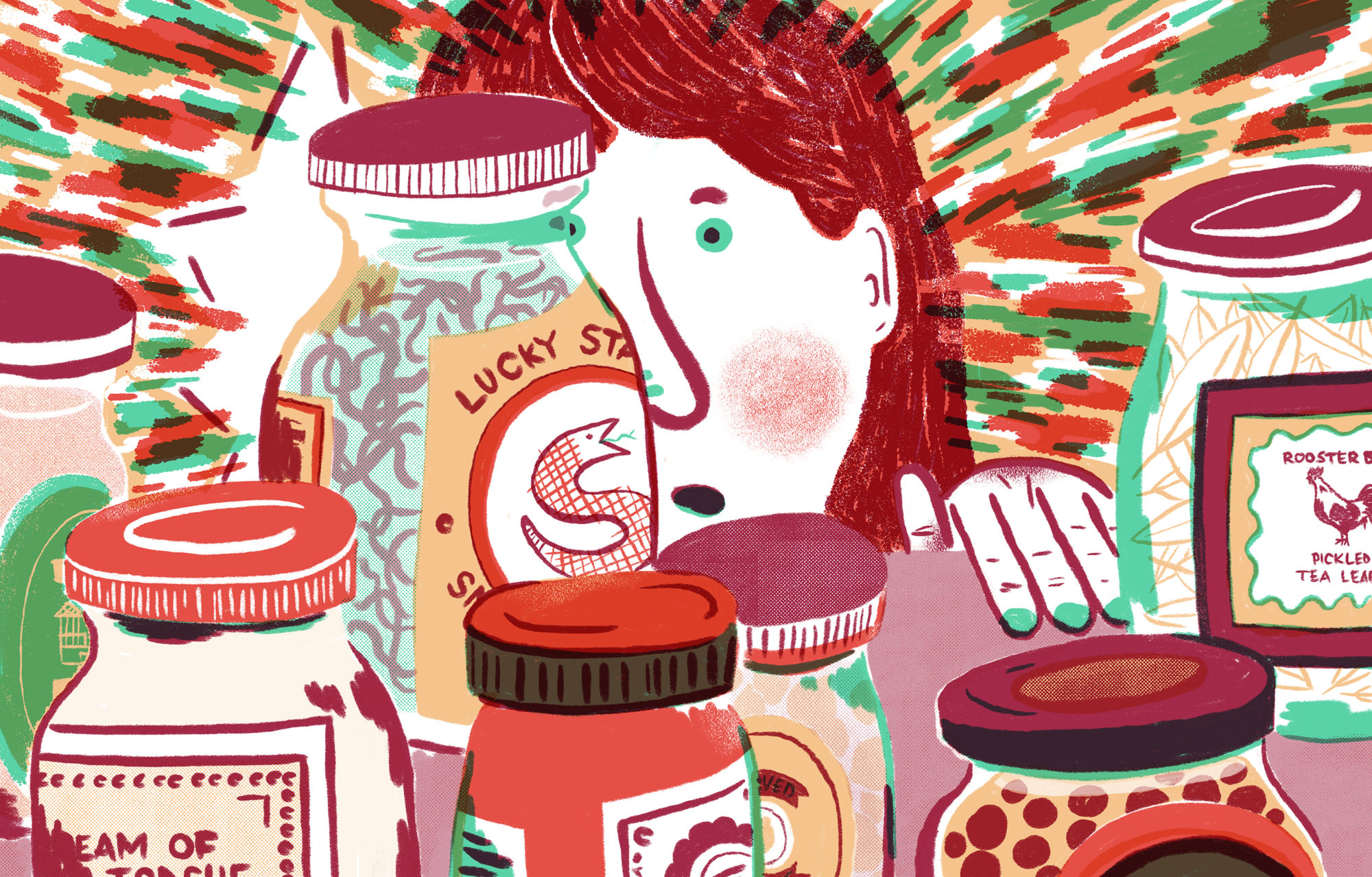 A Rust Belt town’s battle for survival comes down to a single change driver: refugees.

The checkout line snaked around an aisle narrowed by cardboard boxes displaying whole roasted ducks, raw peanuts, bottled coffee drinks, soccer-ball-size jackfruit temptingly cracked open. Spiral-cut pineapples and champagne mangoes were positioned for impulse buys next to the register. Those waiting their turn juggled multiple hand baskets. Others still shopping—hijab-clad housewives and saffron-robed priests—browsed shrimp dumplings and sweet bean bao. A little Dominican girl shrieked when a crawfish escaped a crate and crawled toward freedom. The television was tuned to the World Cup. Festive tasseled lanterns hung from the drop ceiling tiles. A ceramic lucky cat waved from a shelf behind the register.

Downtown Utica is pretty scrappy with its empty warehouses, failed restaurants, peep show bars, and pawnshops. Old-growth trees that once shaded a median, cut down to stumps. Homeless grifters begging on corners. Opioid trafficking and violent crimes clogging the daily police blotter. All unsurprising for a post-industrial city in central New York whose heyday was tied to the Erie Canal and that has been flailing ever since manufacturing plants closed or relocated south in the second half of the last century. But first impressions are often deceptive, and learning to navigate a new place can take resilience. When I moved here 20 years ago, Utica felt like a culinary wasteland. (Don’t get me started about the chicken riggies.) Fresh seafood was scarce. Impossible to find: cilantro, arugula, holy basil, mushroom varieties not labeled “white,” or any fruit not stamped “Dole.” Forget boiled bagels and flaky croissants.

At least that aspect of life—a thriving, diverse food culture —has improved over time. The inner-city social change driver? Refugees. The current percentage of foreign-born residents— about 17.6 percent in a population of 60,000—is higher than any other city on the New York State Thruway corridor. Utica has even been designated a “City of Migration.” Bantu Maay Maay and Karen Sgaw dialects are just two of the 17 languages that can be heard on the streets. We have a Bosnian mosque and a Ukrainian orthodox church. Three pho restaurants. A Nepali folk dance troupe. These new Uticans gradually improved low-income housing. They learned to drive in fierce weather conditions. (Imagine transplanting from sub-Saharan Africa or Southeast Asia to a region known for its subzero blizzards and black ice.) And on a rough stretch of Bleecker Street, once a stronghold of the upstate Mafia, a family-owned grocery store was now sanctuary for all incomers, especially on the day of the week when the delivery truck arrived home from its supply run to New York City wholesalers. Driving some 70 miles round trip from my farmhouse on the northern ridge of the Mohawk Valley, where Utica is the main shopping hub, is a once-a-week errand for me. It involves multiple stops at smaller markets rather than an all-inclusive shop at the big box on the commercial strip. Utica Bread closes at 2, and if I don’t stop there first, the baguettes sell out. When this place opened three years ago, I nearly cried. The croissants rival Poilane. OK, maybe Balthazar. Better than Pillsbury. Flour dusted the wooden floors of the converted Federal-era storefront, and the aroma of yeasty pretzels lingered as one of the staff offered me a sample of cold tomato pie. The baguettes were already gone. I settled for ciabatta the size of a travel pillow.

Onward to Karam’s Middle East Bakery for hummus and stuffed grape leaves. At lunchtime, corner tables were occupied by a cabal of older men who bantered with owner Segean Karam over eggplant makbus and m’jedra—a lentil-and-rice pilaf. It sounded like a decades-long grudge match, but the laughter proves otherwise. His wife, Mary Ann, tucked extra pita into my bag. The Karams, who emigrated from Lebanon in 1974, also make the honeyed syrup that coated sheets of baklava on display by the lunch counter. During the rare heat wave this far north, their tabbouleh salad and falafel gyros save me from sweltering over a stove.

The same Polish-American family has operated Hapanowicz Brothers Meat Market for 95 years, dating back to a time when Italian, Irish and Polish immigrants first arrived in Utica for jobs in the textile mills. The butchers wear white paper hats and aprons. Customers come for the kielbasa, headcheese, liverwurst, bologna, hot dogs, link sausage, and cured bacon, all made on premises. The freezer is stocked with whole rabbit and soup chickens. The “hot greens” of garlicky sautéed escarole—another Utica specialty—never last long in the refrigerator case. Leonard Hapanowicz usually trims pork shoulder for me. He’s good with a knife and always gives me a butter lamb at Easter.

We trade notes about the weather, which is never boring, but on this day he had already punched out and another employee took my order. That’s when I overheard one of the family talking behind the counter about how the younger generation may not keep the store open because they weren’t interested in running a butcher shop. Then she made a crack about foreigners buying up places. The ebullient Dominican staffer slicing my deli meat suddenly went quiet.

Nguyen Phat was my last stop on the way home. Co-owner Vi Lien dumped crushed ice into a display of sea bass and mullet. Stocky and tattooed, he looks like a wrestler.

“You know, one customer drives up from Cooperstown every Wednesday to buy salmon,” he said. “Our truck gets to the fish market in the Bronx at 4 a.m. and is back here by late afternoon.”A five-hour drive each way.

“Who buys the live eels?” I asked, examining a squirming mass in a foam bin.

“Hard pass. I only know the Japanese process, with a spike to the head, and a kasumi knife for skinning.”

“Just throw them in the freezer. The cold will kill them.”

Nothing makes me feel more ignorant, and at the same time inspired, than shelves loaded with unfamiliar ingredients that are pantry essentials to my neighbors. Burmese pickled tea. Amaranth leaves. Banana blossom. Snake beans. I’ve tried to encourage other friends to shop here, but Bleecker Street is either too far out of their way or the catchall phrase “Oriental market” confounds them; I still have so much more to learn myself, but time may be growing short. The Mohawk Valley Resource Center for Refugees has noted that visa applications are down since the 2016 election, and the White House is considering even more reductions to the refugee resettlement program. Last year I got into a shouting match at the dinner table with a guest when he started talking about quotas and “towel heads.” (He has since apologized.) We live close enough to the Canadian border to witness scared asylum seekers, especially Syrians and North Africans, fleeing farther north.

A few months ago, ICE detained a local dairy worker in front of his children, who were waiting for the school bus. When the farmer objected, they threw his phone in the road. Border Patrol is conducting searches without warrants, allowed by federal law, at transportation hubs in nearby Syracuse and Rochester. Immigration advocates argue this practice amounts to racial profiling. Some may lack documentation, but they are my neighbors, too.

When my turn came to check out, Lien was back on the register. That’s when I noticed his wife, a pretty blonde gal with an upstate accent, wasn’t in her usual spot behind the stack of Pocky Sticks and jelly sponge cake rolls.

“Hey, did your wife have the baby?” I asked.

“Finally came this past Saturday.”

City of Utica, population: plus one.